Figure Lengend Snippet: HELQ interacts with the BCDX2 RAD51 paralog complex and ATR. ( a and b ) The HELQ and XRCC2 complexes were immunopurified from nuclear extracts prepared from HeLa S3 cells expressing FLAG-HA-epitope-tagged HELQ and XRCC2, respectively. The complexes were sequentially purified with anti-FLAG and anti-HA antibodies. The complexes were resolved by SDS-PAGE on a 4–20% gradient gel and visualized by silver staining. Approximate migration positions of proteins identified in gel sections are shown (left). Immunoblotting with specific antibodies confirmed the presence of the proteins in the HELQ complex (right). ( c ) BCDX2 and ATR associate with HELQ before and after MMC treatment. The FLAG-HA-tagged HELQ complex was purified from HeLa S3 with or without MMC treatment for 18 h. Similar amounts of RAD51B, C, D, XRCC2 and ATR were coimmunoprecipitated with HELQ before and after MMC treatment. Nucleic acid digestion with Benzonase did not influence HELQ-BCDX2 and HELQ-ATR associations. ( d ) GFP-tagged HELQ and DsRed-Monomer-tagged RAD51B were transiently coexpressed in HEK293T cells. The whole-cell extracts prepared from those transfected cells were sonicated and incubated in the presence or absence of Benzonase. GFP-tagged HELQ was immunoprecipitated with anti-GFP antibody and DsRed-Monomer-tagged RAD51B, and endogenous ATR in the immunoprecipitated samples were detected with anti-RAD51B and anti-ATR antibodies. ( e ) GFP-tagged HELQ and flag-tagged XRCC2 were transiently coexpressed in HEK293T cells. HELQ and XRCC2 association was examined with XRCC2-specific antibody after immunoprecipitation of GFP-tagged HELQ with anti-GFP antibody. Flag-tagged XRCC2 (upper bands) and endogenous XRCC2 (lower bands) were both coimmunoprecipitated with GFP-tagged HELQ. Full-size immunoblots can be found in Supplementary Fig. S5 .

Article Snippet: The supernatant, nuclear extract and chromatin fractions were prepared from the cells, and the HELQ and XRCC2 complexes were immunoprecipitated from the nuclear extracts by incubating with M2 anti-FLAG agarose gel for 4 h with rotation in the presence or absence of 50 U ml−1 (). 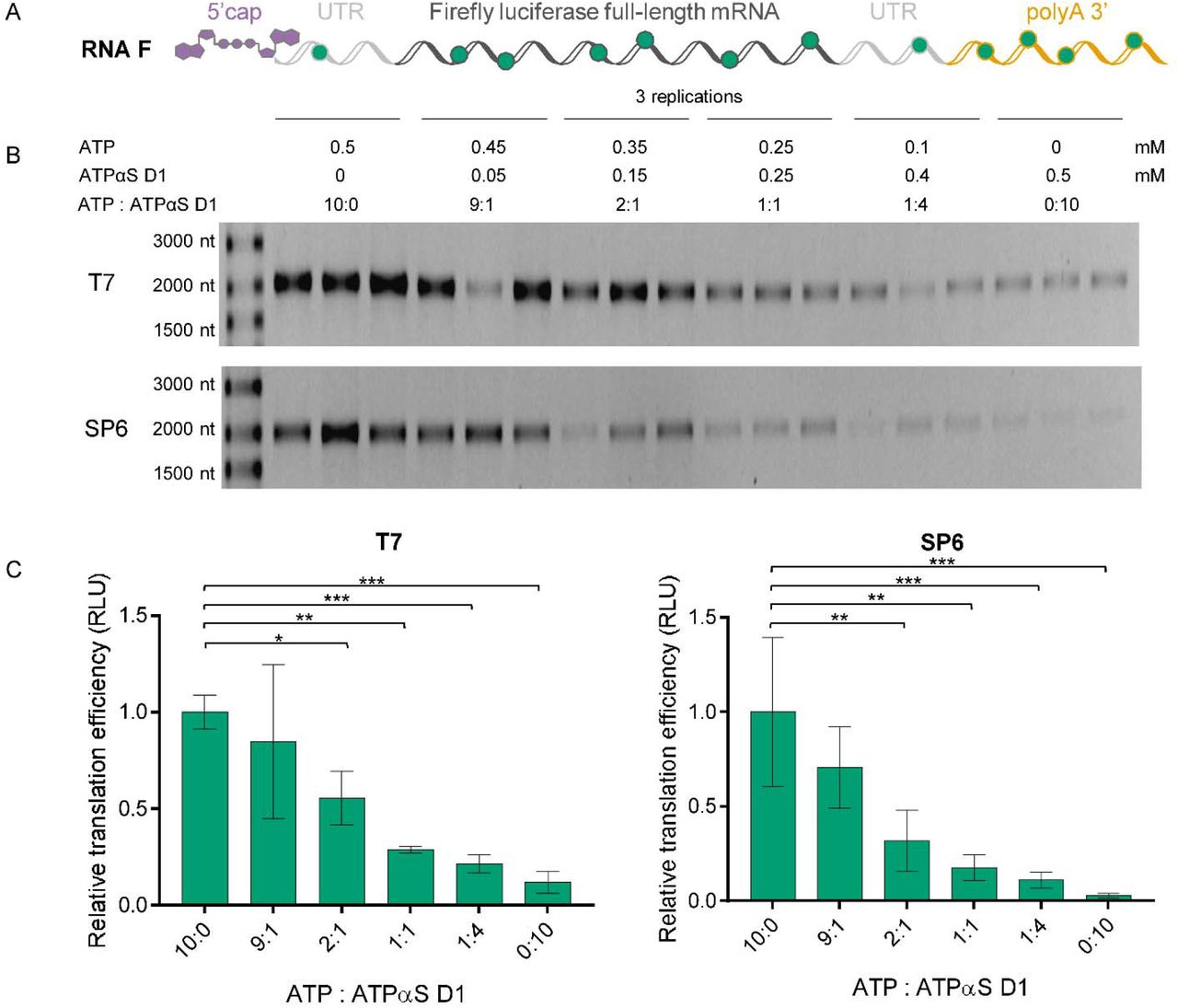 Figure Lengend Snippet: Analysis of homogeneity and translational properties of mRNAs uniformly modified with phosphorothioate moieties. (A) Schematic representation of Firefly luciferase (RNA F) in vitro transcribed (IVT) with T7 or SP6 RNA polymerase. Green dots represent phosphorothioate moieties randomly placed within the mRNA body; (B) RNA F variants co-transcriptionally 5’-capped with the cap analog (β-S-ARCA D1) and obtained in the presence of the indicated ATP:ATPαS D1 molar ratios (10:0, 9:1,2:1, 1:1, 1:4, or 0:10) are synthesized with T7 or SP6 RNA polymerase and purified on a silica membrane (NucleoSpin RNA Clean-up XS, Macherey-Nagel). The transcription yields and quality of transcripts are analyzed by electrophoresis on a 1% agarose gel. (C) Translation efficiencies are tested in rabbit reticulocyte lysate (Promega) using appropriate RNA F concentrations (3, 1.5, 0.75, and 0.375 ng/μL) (see Materials and Methods for further details). Translation efficiencies are determined based on measured luminescence as a function of RNA F concentration. Slopes determined for different variants of RNA F are normalized to the slope of unmodified RNA F (10:0), calculated as the mean value from three independent experiments ± standard deviation (SD). Statistical significance: * p Figure Lengend Snippet: WRBcc inhibition is alleviated upon TRC40 immunodepletion. ( A ) Depletion of TRC40 was confirmed by immunoblotting. ( B ) Rabbit reticulocyte lysate was immunodepleted for TRC40 or subjected to a mock treatment. Treated lysates were then used as before for in vitro translations and post-translational translocation assays in the presence of 10 µM MBP-WRBcc. N-glycosylated forms are indicated and quantified (means ± s.e.) relative to their matched MBP control samples as before.

Article Snippet: for in vitro translation was from . Figure Lengend Snippet: Structures and photoproducts of G-quadruplex forming sequences. A) Structures of the cis,syn and trans,anti CPDs of TT and their nuclease P1 degradation products. B) Known structures of human telomeric G-quadruplex forming sequences in Na + and K + solution. The nucleotide numbering system is for the Tel26 sequence, and the numbers 1-3 refer to the TTA loop numbers as shown below. C) Sequences referred to or used in this study written 5′→3′. Figure Lengend Snippet: A Tool to Selectively Induce 8-oxoG at Telomeres (A) Schematic of the chemoptogenetic tool for inducing telomeric 8-oxoG. (B) FAP-mCer-TRF1 colocalization with telomeres in HeLaFAP clone 10 by anti-mCer immunofluorescence (IF) with telo-FISH (top panels) and mCer fluorescence with anti-RAP1 (bottom panels). (C) Immunoblot for TRF1 in whole-cell extracts from HeLaFAP. One star indicates FAP-mCer-TRF1; two stars indicate endogenous TRF1. (D) Schematic of 8-oxoG detection in telomere restriction fragments by converting 8-oxoGs to DSBs with repair enzymes and S1 nuclease. (E) S blot of telomere restriction fragments from untreated and dye + light-treated HeLaFAP cells after digestion with the indicated enzymes and S1 nuclease. (F) Quantification of the percentage of cleaved telomeric DNA (bracketed area in the gel in E) as a function of total DNA. Means ± SD of 3 independent experiments; *p

Article Snippet: To calculate the percent of telomeric DNA cleaved by digestion with repair enzymes and/or , the telomere signal intensity of DNA migrating below (cleaved) the intact telomeres (bulk) was divided by the total telomere intensity in the lane. Figure Lengend Snippet: A template cdA induced the formation of a loop on a gapped DNA during pol β lesion bypass. Formation of a loop in the template strand of the substrates with a template dA, 5′S-cdA or 5′R-cdA in (CAG) 10 repeats opposite ( A ) or downstream ( B ) of a 1-nt gap was probed in the absence of pol β. In all panels, substrates were radiolabeled at the 5′-end of its template strand. The substrates were incubated with 0.15 units (A) or 0.05 units (B) of S1 Nuclease at 3-, 5-, and 10-min time intervals (lanes 2–4, 7–9 and 12–14). Lanes 1, 6 and 11 represent the undigested substrate, whereas lanes 5, 10 and 15 represent size markers (M). For all the experiments, 25 nM of substrate was used. Arrows and circles indicate the major S1 Nuclease digestion products.

Article Snippet: To test this possibility, we initially examined the formation of a hairpin/loop in an intact double-strand DNA using , a single strand DNA specific nuclease ( ) (Supplementary Figure S1). Article Title: Reverse Transcription of a Self-Primed Retrotransposon Requires an RNA Structure Similar to the U5-IR Stem-Loop of Retroviruses

Figure Lengend Snippet: RNase protection assay to detect packaging of Tf1 RNA into VLPs. Cellular extracts containing VLPs were treated with various amounts of Benzonase for 6 min. The RNAs extracted from the Benzonase-treated samples and from whole cells were analyzed on RNA blots. Tf1 and actin mRNA were detected by hybridization with probes specific for Tf1 Gag and actin of S. pombe . The rRNAs were visualized by ethidium bromide staining of the agarose gel under UV light. Wild Type, strain containing the wild-type sequence of Tf1; Gag-Δ, strain with deletion in the Tf1 Gag that destabilizes Gag without affecting translation of IN; T, total RNA extracted from whole cells with glass beads and phenol-chloroform; 0, 6, and 12, RNA samples extracted from the native extracts containing VLPs after treatment with 0, 6, and 12 U of Benzonase, respectively. Article Snippet: For RNA editing assays, an mRNA substrate was incubated at 28°C for 2 h. RNA was isolated and digested into 5′ mononucleotides with 1 μg of (, Osaka) in the presence of 50 mM ammonium acetate (pH 4.8) at 37°C for 3 h. Mononucleotides were separated on cellulose TLC plates (20 × 20 cm, Funakoshi, Tokyo) by using isopropyl alcohol/HCl/water (70:15:15).