Article Snippet: On-column affinity tag cleavage The SPI2-SRHWAP-His6 fusion protein was loaded on (), according to the manufacturer's instruction. 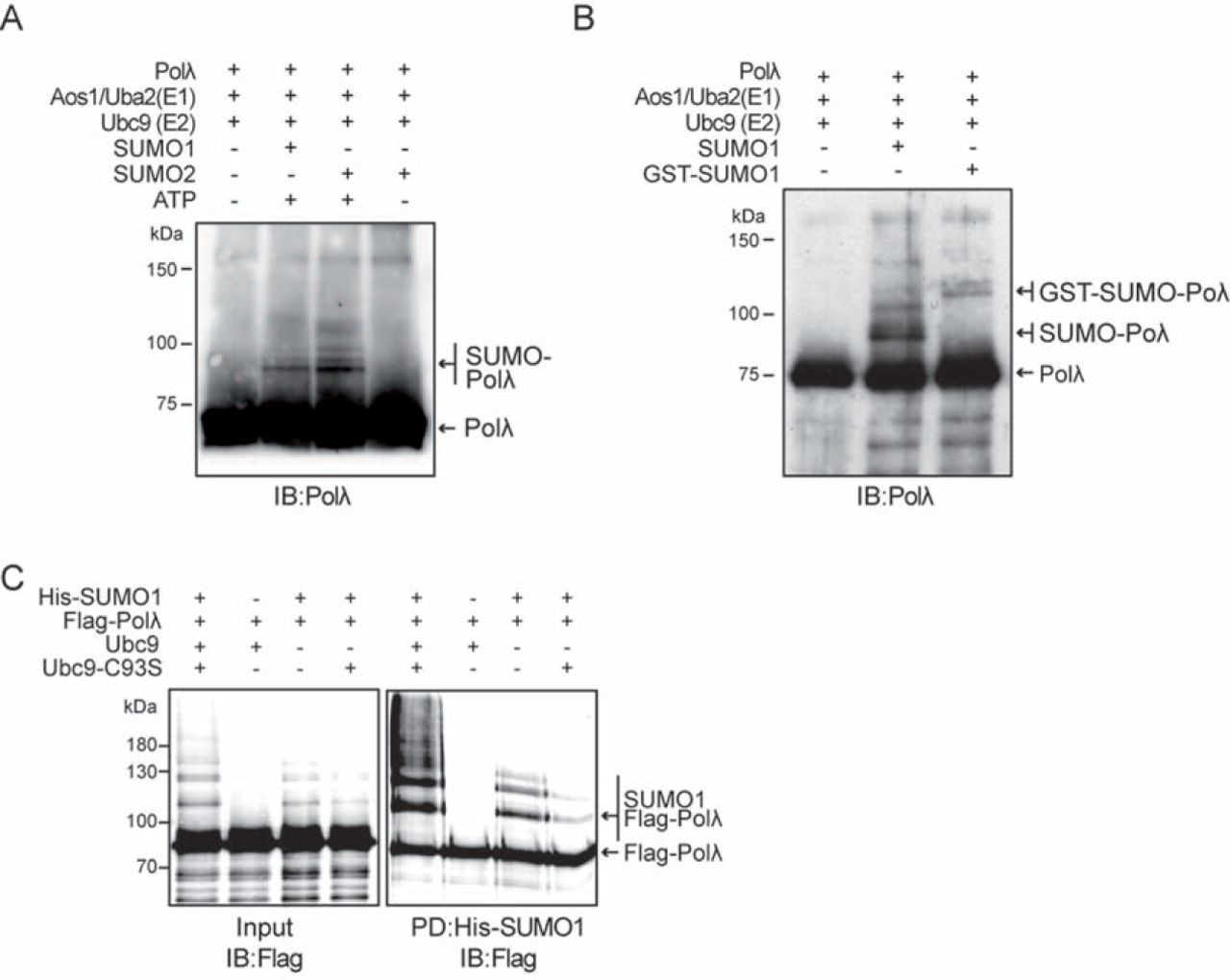 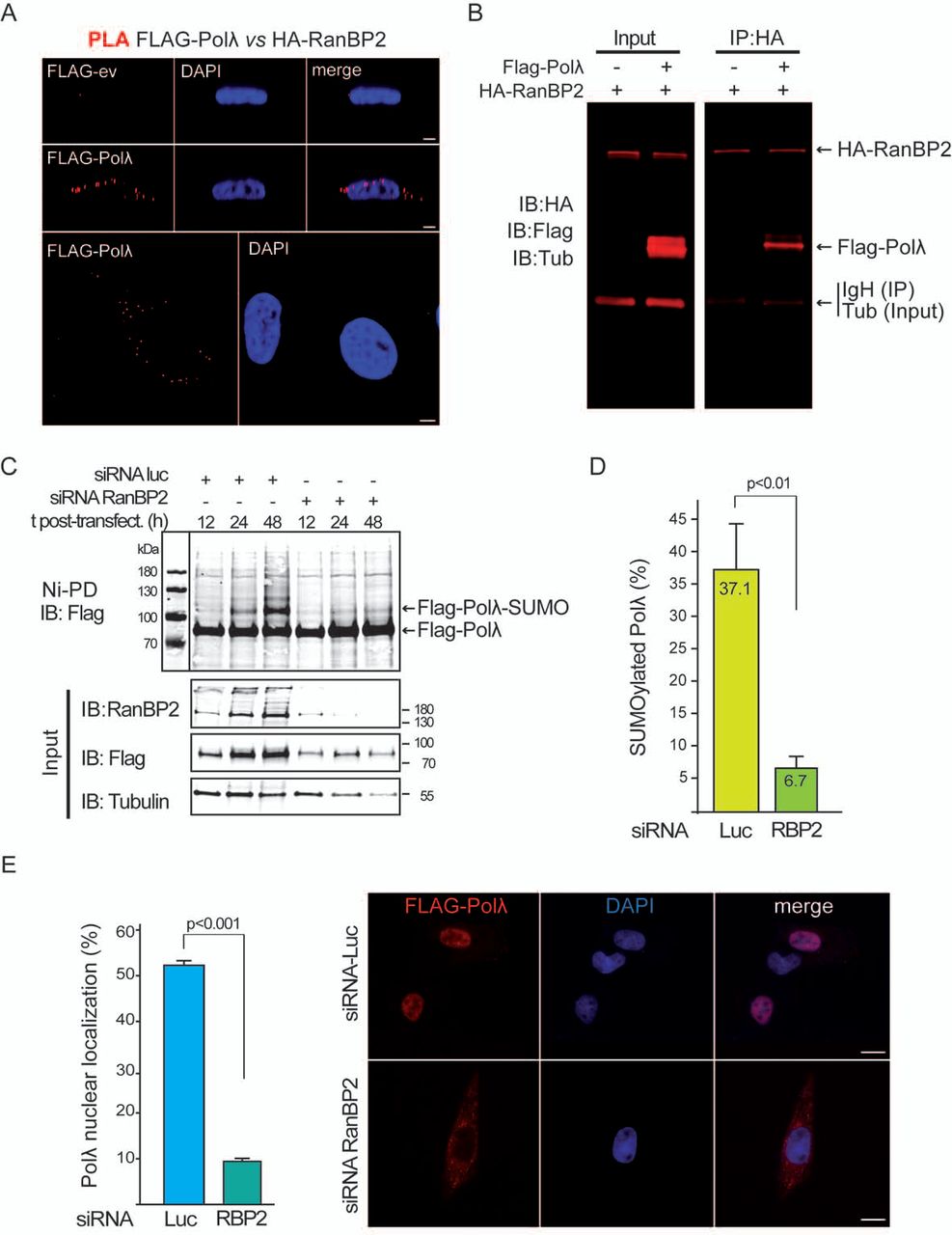 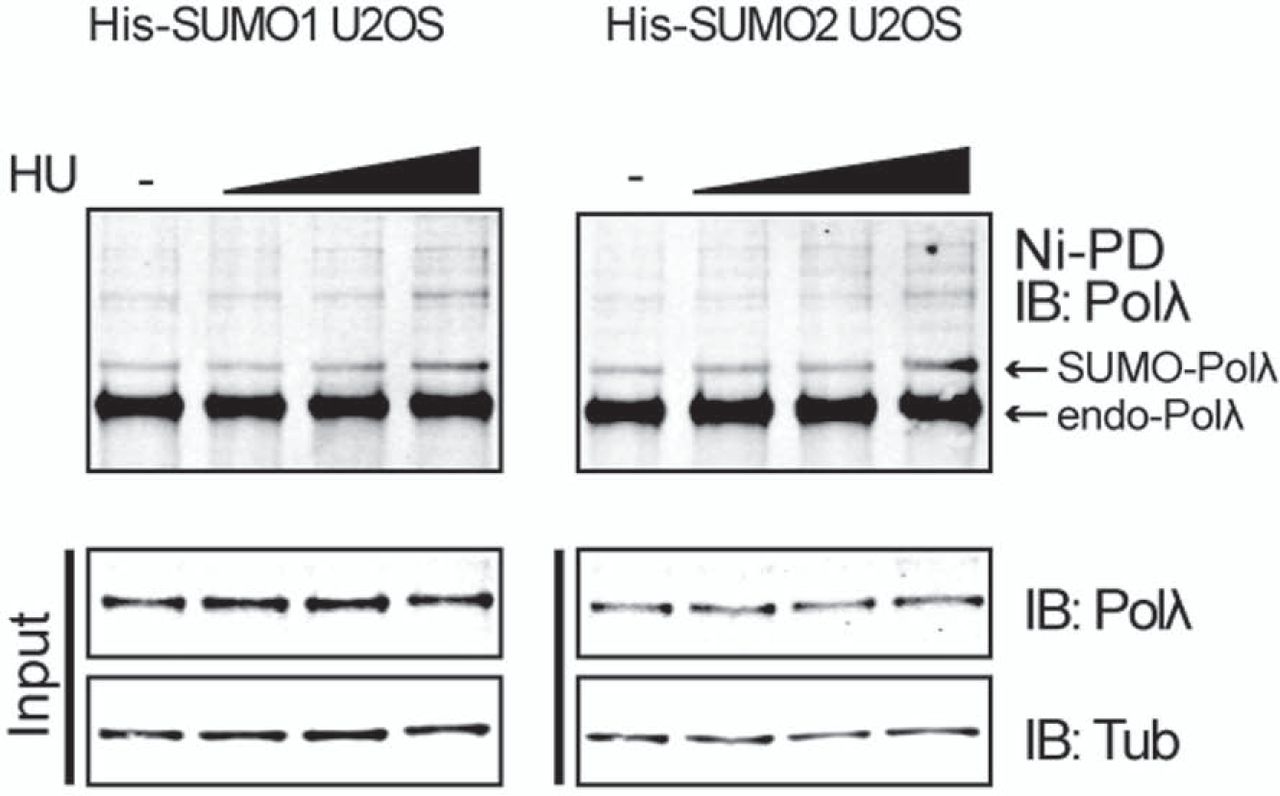 Figure Lengend Snippet: Increased SUMOylation of Polλ in response to HU. His-SUMO1 and -SUMO2 U2OS cells were grown in p100 dishes until 80% confluence, either mock-treated or treated with increasing doses of HU (1 mM, 2 mM and 3 mM) for 2 h, and the harvested. His-SUMO-conjugates were pulled down on Ni-NTA beads (Ni-PD) under denaturing conditions and endogenous SUMO-Polλ was detected by immunoblotting (IB) using anti-Polλ antibody. Expression of Polλ and tubulin was monitored by immunoblotting cell lysates (input) with the corresponding antibodies. 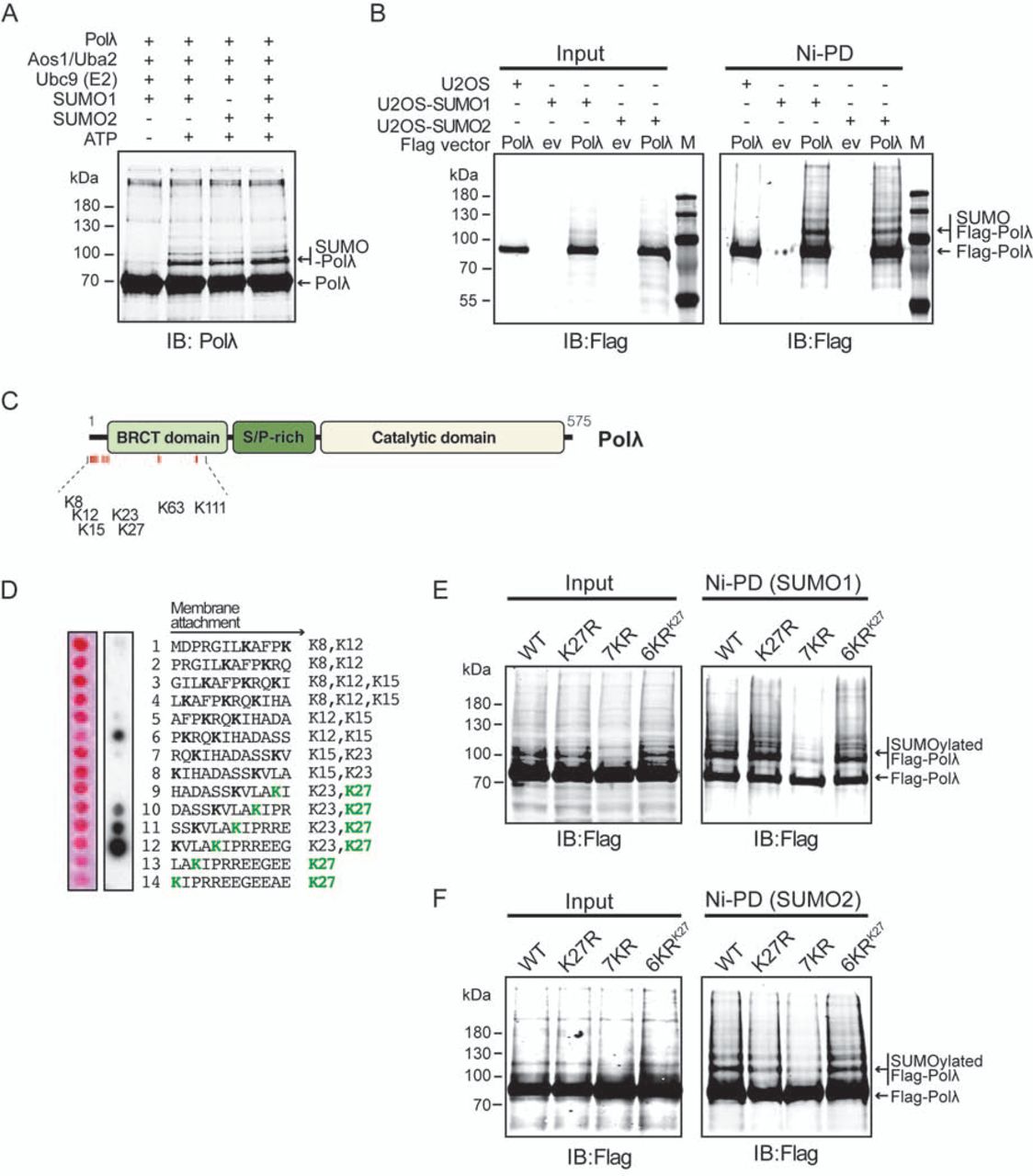 Figure Lengend Snippet: Visualization of labeled target complex and enrichment of occupancy The Rpn5 subunit of the wild-type yeast proteasome lid complex was modified by site-directed mutagenesis to contain the amber codon (TAG) at position Y13 (Rpn5 Y13→TAG ) and S26 (Rpn5 S26→TAG ). UAA-containing lid complex (Rpn5 Y13→pAzF or Rpn5 S26→pAzF ) was then generated by in vivo incorporation of the UAA via amber suppression. ( A ). ( B ) Rpn5 secondary structure prediction (ssPRO4.0) places Y13 within a flexible loop, and S26 within an N-terminal alpha-helix. 2D class averages: the left images show unlabeled wild-type and unlabeled Rpn5 Y13→pAzF or Rpn5 S26→pAzF lid particles obtained by negative stain EM. Representative 2D classes from previous 5 . Red arrows indicate electron density corresponding to the MBP label. ( C ) 3D negative stain reconstruction (~20Å resolution) of wild-type lid complex for visual orientation of Rpn5 subunit location within the lid complex. ( D ) Cartoon schematic of a conjugation reaction performed using the GFP Y151→pAzF target reporter protein while bound to its affinity purification resin. Numbers in this panel correspond to the numbered lanes in ( E ) SDS-PAGE analysis of the on-resin conjugation of MBP DBCO (42.5 kDa) to GFP Y151→pAzF (26.9 kDa) with amylose enrichment. A conjugation reaction was performed immediately following capture of 6X His-tagged GFP Y151→pAzF ), 5 ul of resin was used for elution and visualization by SDS gel (lane 1). For the “on-resin” reaction, 50 ul of 250 uM MBP DBCO was added directly to 20 ul of saturated resin, and the reaction was allowed to proceed for 4 hours while turning at 4°C. Ni-NTA resin was then collected, allowing for separation of unreacted MBP DBCO in the flow-through (lane 2) from a resin-bound mixture of conjugated and unconjugated GFP Y151→pAzF reporter protein (eluted and visualized in lane 3). This conjugation reaction was

Article Snippet: Isolated in the same SEC fractions as the unlabeled lid complexes shown below to the left are: Middle; reference-free 2D class averages of MBP-conjugated lid complex, labeled at amino acid position Y13, and bottom; position S26 in Rpn5 using the maleimide-DBCO reagent shown in reporter protein on .

Figure Lengend Snippet: ETV5 and TWIST1 interact in vitro and in vivo. ( A ) In vitro pull-down assay showing that recombinant ETV5 can associate with TWIST1 in a cell lysate. Lysate from HEK293T cells transfected with Myc-tagged Twist1 was incubated with either control Ni-NTA

Article Snippet: His-ETV5 protein was purified by () from the soluble fraction of the lysate and used to inject rabbits. Article Snippet: His-tagged Syn5 RNAP was isolated from the lysate using according to the standard His-tagged protein purification procedure. Article Snippet: The His-tagged FumF protein was expressed and purified using (, Valencia, CA, USA), according to the manufacturer's instructions. Article Snippet: Proteins were expressed in BL21(DE3) at 22°C for 2.5 h. The N-terminally His-tagged p53 proteins were first purified on a (, Valencica, CA). Article Title: RAE1 Is a Shuttling mRNA Export Factor That Binds to a GLEBS-like NUP98 Motif at the Nuclear Pore Complex through Multiple Domains Article Title: The Regulatory Particle of the Saccharomyces cerevisiae Proteasome

Figure Lengend Snippet: Proteasomal ATPases associate into a heteromeric complex. His 6 -Rpt1 was expressed in a Δ rpt1 background (DY19). Extracts from His 6 -Rpt1-expressing and wild-type (WT) control strains were partially purified on DEAE–CL-6B resin in the absence of ATP. The 500 mM NaCl eluate was fractionated on Ni-NTA affinity columns. Column fractions were subjected to immunoblotting (A) and tested for peptidase activity against Suc-LLVY-AMC (B). The epitope-tagged complex eluting at 100 mM imidazole contained a number of RP subunits (Rpt1, Rpt6, and Rpn10) (A) but lacked peptidase activity (B). The wild-type complex eluted during low-imidazole rinses. (C) Extracts from strains expressing His 6 -tagged versions of each of the six ATPases were also purified by Ni-NTA chromatography. Fractions loaded onto the Ni-NTA column (Load) were compared to fractions from the 100 mM imidazole eluate (Eluate) by immunoblotting with anti-Rpt1 and anti-Rpt6 antibodies.

Article Snippet: Briefly, eluates from the DEAE–Affi-Gel Blue column were loaded onto (). Article Title: The Regulatory Particle of the Saccharomyces cerevisiae Proteasome

Figure Lengend Snippet: The proteasome is a heteromeric complex of ATPases. His 6 -Rpt2 was expressed in a Δ rpt2 background (DY17). Extracts from His 6 -Rpt2-expressing and wild-type (WT) control strains were partially purified by DEAE–Affi-Gel Blue chromatography in the presence of 1 mM Mg-ATP. The 150 mM NaCl eluate was subjected to Ni-NTA affinity chromatography. Column fractions were immunoblotted (A) and tested for peptidase activity against Suc-LLVY-AMC (B). The epitope-tagged complex eluted at 100 mM imidazole, as indicated by immunoblotting against Rpt1, Rpt6, and Rpn10 (A) and by peptidase activity (B). The wild-type proteasome eluted during low-imidazole rinses. (C) Extracts from strains expressing His 6 -tagged versions of each of the six ATPases were individually purified by Ni-NTA chromatography. Fractions loaded onto the Ni-NTA column (Load) were compared to fractions from the 100 mM imidazole eluate (Eluate) by immunoblotting with anti-Rpt1 and anti-Rpt6 antibodies.

Article Snippet: Briefly, eluates from the DEAE–Affi-Gel Blue column were loaded onto (). Figure Lengend Snippet: 5e RNA binding activities of polypeptides 72 e, 72 f, 72 g, 72 h and 72 j . Purified his-tagged polypeptides 72 e to 72 j were incubated with in vitro transcribed 5e SRP RNA and Ni-NTA magnetic agarose beads as described in the Methods. The bound protein and RNA were analyzed by SDS PAGE followed by staining of the same gel with Coomassie blue (lanes labeled p) and Ethidium bromide (lanes labeled r). Molecular mass markers in kDa are shown in lane m. Plus signs indicate the formation of complexes, the minus sign below 72 g indicates that this polypeptide was unable to bind. Variable amounts of a material which probably represented 5e SRP RNA dimers were observed (arrow heads). Figure Lengend Snippet: 5e SRP RNA binding activities of mutated SRP72 fragments . For each construct, 82.5 ng of in vitro transcribed 5e SRP RNA was incubated with purified protein at the concentrations 0.056, 0.18, 0.56, and 1.8 uM. Samples were incubated with Ni-NTA magnetic agarose beads as described in the Methods. The bound protein and RNA were analyzed by SDS PAGE followed by staining with Coomassie blue (labeled p below each panel) and Ethidium bromide. The amount of bound RNA was measured and normalized to 100 percent in reference to the binding observed with 72 h, 72 j, or 72 k. The insert on the bottom right depicts the design of the assay. Figure Lengend Snippet: Chymotryptic protection in the RNA binding domain of SRP72 . a. Digestion of purified 72 j (lane 1) with Chymotrypsin for 3, 6 or 10 minutes (lanes 2 to 4). Similarly, digestion of purified 72 k (lane 5) for 3, 6 or 10 minutes (lanes 6 to 8). Lane 9, the 72 l fragment (lacking residues 584 to 590) treated with Chymotrypsin for 10 minutes; lane 10, the 585/6 polypeptide, generated by a 10 minute chymotryptic digest of 72 k, retained on Ni-NTA magnetic agarose beads (see Methods for details). All samples were analyzed by electrophoresis on 12.5 percent SDS polyacrylamide gels followed by staining of the polypeptides with Coomassie blue. Molecular mass markers in kDa are indicated on the left and the migrations of Chymotrypsin (CT) and the his-tagged C-terminal 585/6 fragment are marked on the right. b. Digestion of 1.2 μg 72 j with Chymotrypsin in the absence of RNA (lane 1) or in the presence of increasing amounts of human Δ35 RNA (lanes 2 to 4)[ 23 ]. Indicated are molecular mass markers and the migrations of Chymotrypsin (CT), the 72 j polypeptide, and the his-tagged oligopeptide generated by the cleavages of the Tyrosines 585 or 586. c. Binding of human Δ35 to increasing amounts of 72 j. d. Results from gelshift experiment for the binding data shown in Figure 5c. Indicated are the mobilities of the free Δ35 RNA (fr) and its complex with 72 j (cp). Lane numbers correspond to the seven data points shown in Figure 5c. e. Similar to Figure 5 d, showing the formation of a complex between the 72 j and the 5e SRP RNA. Figure Lengend Snippet: SsoRad54 protein interacts directly with SsoRadA protein. ( A ) Purified SsoRad54 protein was incubated with or without SsoRadA protein prior to the addition of Ni-NTA magnetic beads. The beads were magnetically sequestered and subjected to extensive washes to remove unbound proteins. Control reactions in lanes 2 and 3 represent the binding of SsoRad54 or SsoRadA, respectively, to the magnetic beads; lanes 5 and 6 show SsoRad54 and SsoRadA present in the supernatant following magnetic sequestration of the beads. Lane 1 shows the interaction between SsoRad54 and SsoRadA as revealed by binding of the protein complex to the beads, while lane 4 shows the protein that remains unbound and free in the supernatant. ( B ) SsoRad54 also interacts with Thermus thermophilus RecA but not with Thermotoga maritima LDH ( C ) or SsoSSB ( D ). Migration position for each protein is indicated to the right of each gel. Article Snippet: Glutathione-Sepharose and were obtained from (USA).

Article Snippet: As a control, RAD51 (5 μg) or Sc Rad51 (5 μg) was incubated with in the absence of BCCIPβ-(HIS)6 , under the same experimental conditions as above.

Article Title: Cloning and Characterization of a Cold-adapted Chitosanase from Marine Bacterium Bacillus sp. BY01

Article Snippet: Purification and Characterization of csnB After centrifuging the cultures at 4 °C with 9000 rpm for 20 min, the supernatant was loaded onto a (, Little Chalfont, Buckinghamshire, UK) and performed purification process with AKTA150 automatic purification system.