Article Title: The Role of the Mechanotransduction Ion Channel Candidate Nanchung-Inactive in Auditory Transduction in an Insect Ear Article Title: The Role of the Mechanotransduction Ion Channel Candidate Nanchung-Inactive in Auditory Transduction in an Insect Ear

Figure Lengend Snippet: Morphology of Müller's organ and the auditory neurons. A , Schematic of Müller's organ (magenta) viewed from the inner aspect, and the three populations of sensory neurons (green, I–III) with their dendritic projections. The gray oval represents the tympanum. Dashed parts of the outline indicate points of attachment of Müllers organ to the tympanum. B , Double staining of the nuclei of cells of Müller's organ (magenta, DAPI) and three Group III auditory neurons individually stained with neurobiotin/Dylight 488 strepavidin (green). There is some nonspecific green fluorescence at the point of attachment of the organ to the tympanum. C , Schematic of one scolopidium, consisting of an auditory neuron (green) enclosed in a Schwann cell, a fibrous cell, and scolopale cell, which enclose the soma and axon, the basal dendrite, and the distal dendrite and cilium, respectively. The cilium of the sensory neuron is embedded in an electron-dense cap produced by a distal attachment cell. The neuronal dendrite has a prominent dilation close to the base of the cilium. From the distal dendrite extends an apical cilium, which also possesses a dilation that divides it into proximal and distal regions. The receptor lymph cavity enclosed by the scolopale cell that bathes the cilium is shaded. D , Neurobiotin-streptavidin staining of a Group III auditory neuron in situ reveals the dendrite dilation and apical cilium. 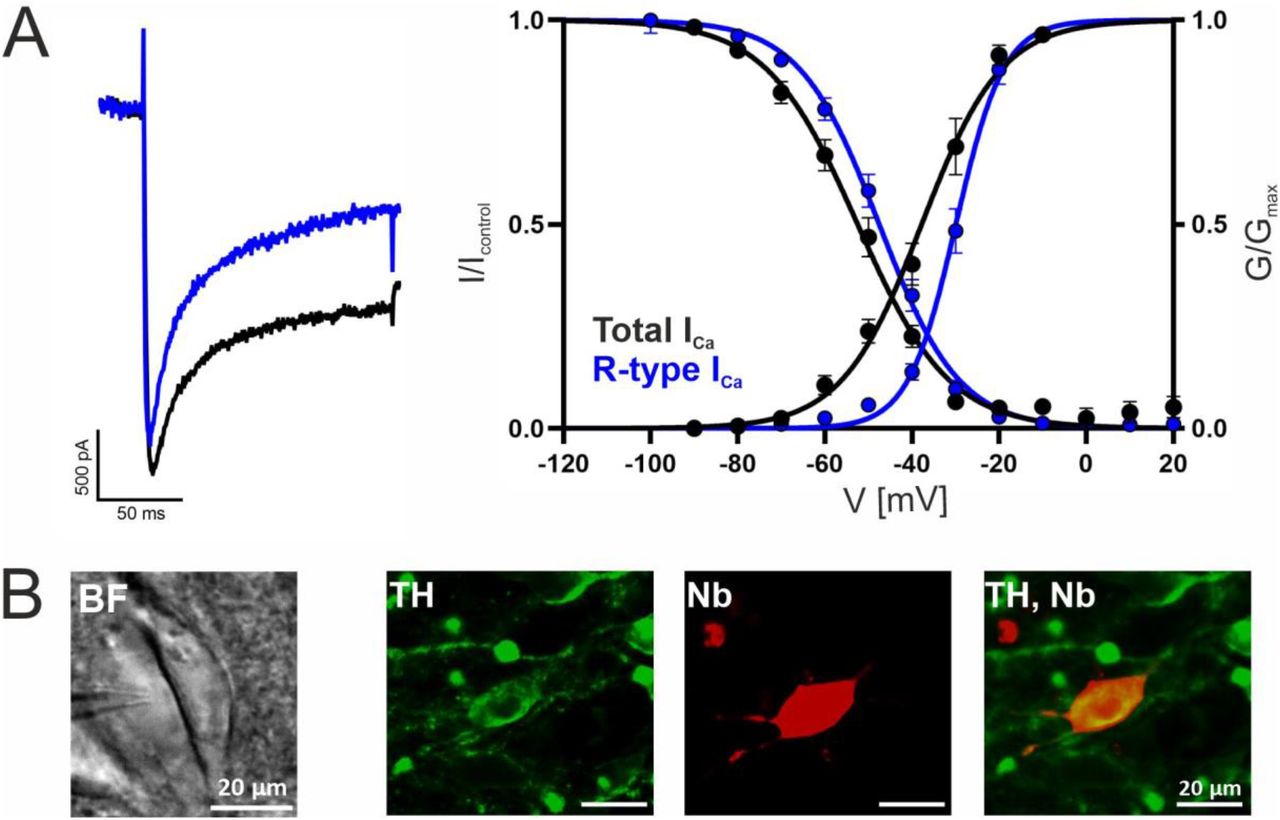 Figure Lengend Snippet: Voltage-dependence of gating of R-type currents in mouse SN DA neurons. I Ca recorded in SN DA neurons without (black traces/symbols) or after preincubation (blue) of slices with a Cav channel blocker cocktail to inhibit Cav3 (10 µM Z941), Cav1 (1 µM isradipine), Cav2.1 and Cav2.2 (1 µM ω-conotoxin-MVIIC). A . Left panel: representative current traces of recordings of steady-state activation (at −20 mV test potential, similar amplitudes were chosen). Right panel: voltage-dependence of steady-state activation and inactivation, curve fits to the mean values are shown. B . Exemplary neuron as seen under the patch clamp microscope with patch pipette next to it (left; BF, brightfield) and a neuron after histochemical staining for tyrosine hydroxylase (TH, green) and neurobiotin (Nb, red). Detailed parameters and statistics are given in Table 3 .

Figure Lengend Snippet: Example recording sites labeled with Fluoro-Gold ( A ), Neurobiotin 350 ( B ), and Neurobiotin 488 ( C ). Dashed lines indicate the boundaries of IC and its subregions: parts of the central IC nucleus, area 1 and area 2, as well as dorsal (d) and lateral (lc) cortex. Scale bar: 500 μm.