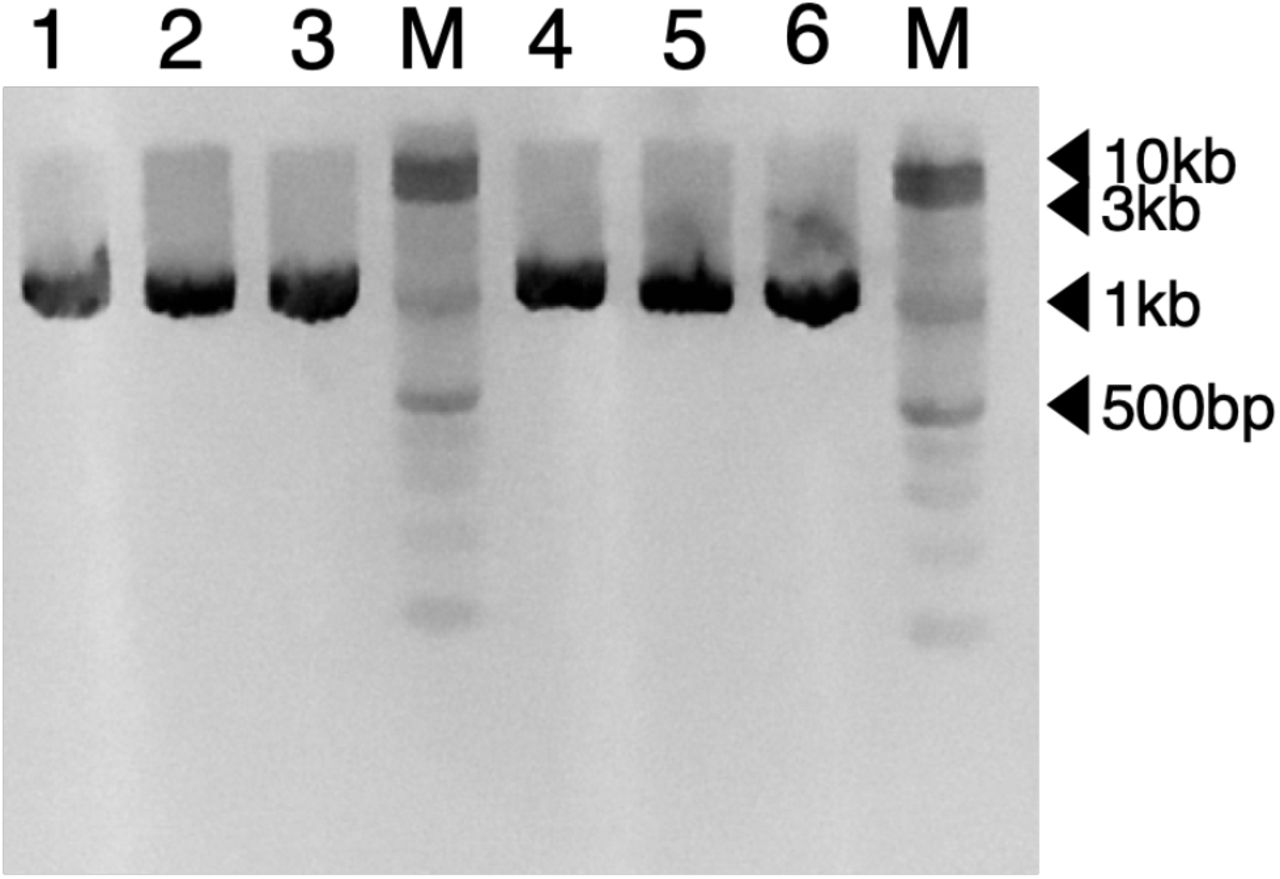 Article Snippet: According to the NEB calculator (NEB, online tool), Tm for NEB Q5 and Onetaq was determined to be 52°C and 61°C. 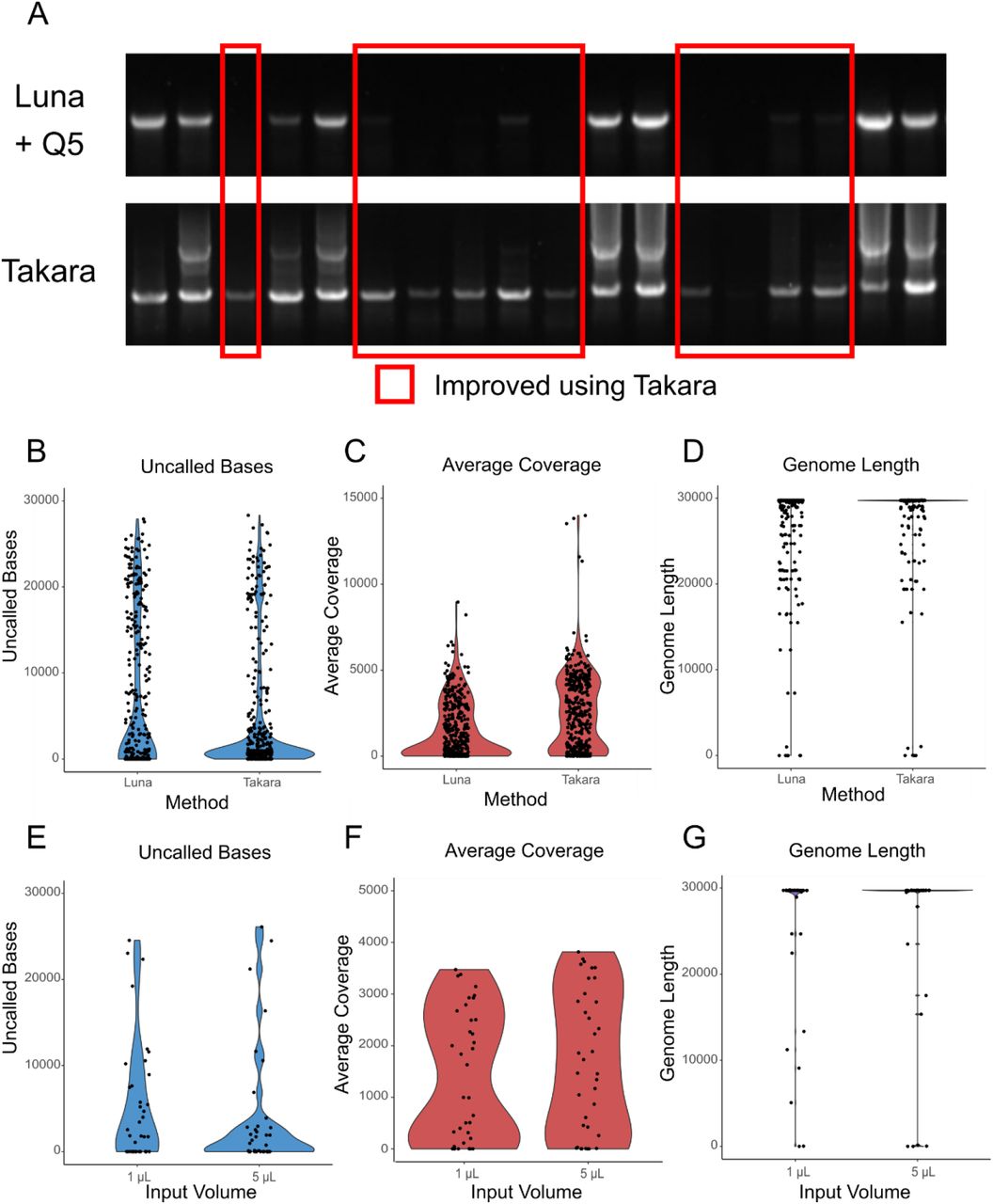 Figure Lengend Snippet: Optimization of RT-PCR kit and parameters for the generation of SARS-CoV-2 cDNA for genome sequencing. (A) RT-PCR of 18 SARS-CoV-2 RNA samples was performed using the two-step Lunascript + Q5 protocol or the Takara 1-step kit. For 9 of 18 samples, the 1-step kit performed better at generating a visible band than the 2-step protocol. (B) 384 SARS-CoV-2 positive RNA samples were sequenced using both the 2-step and Takara 1-step protocols. In addition to generating more reconstructed genomes, the Takara 1-step protocol generated fewer uncalled bases (B) , better average genome coverage (C) and longer consensus genomes (D) than the 2-step protocol. RT-PCR was also performed on 37 samples using either 1μL or 5μL of sample as input in the reaction. The 5μL reactions were found to have ( E ) fewer uncalled bases, ( F ) greater average coverage, and ( G ) longer average genome length than achieved in the 1μL cases. 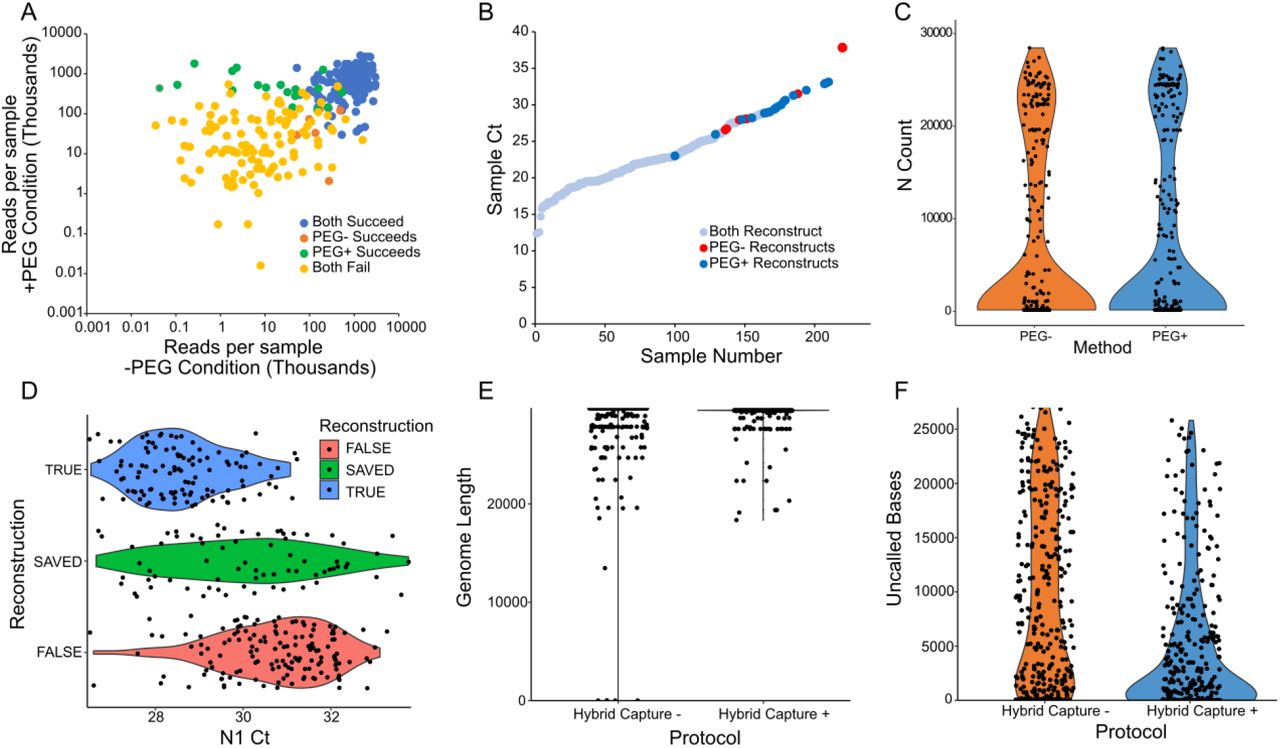 Figure Lengend Snippet: Increasing effective concentration of SARS-CoV-2 cDNA during tagmentation and in the final sequenced libraries improves sequencing outcomes. (A) RT-PCR was performed on a set of 288 SARS-CoV-2 positive samples which were then tagmented under standard conditions or with 8% PEG 8000 and 10-fold reduced transposase concentration. Samples tagmented with PEG in general achieved greater reads per sample, and 16 genomes reconstructed only in the PEG+ condition (green), compared to only 6 in the PEG-case (orange). (B) Reconstructed samples from this experiment were plotted by Ct and colored by whether genome reconstruction succeeded in both treatments (light blue), only in the PEG-condition(red), or only in the PEG+ condition (dark blue). Samples which reconstruct only in the PEG+ case are highly biased toward high-Ct samples, suggesting that these samples may preferentially reconstruct due to molecular crowding induced by PEG. (C) Samples from the PEG- and PEG+ conditions are displayed in violin plots of the number of uncalled bases with individual points represented. There is no statistically significant difference in the overall number of uncalled bases per sample. (D) 384 samples above Ct 26.5 were sequenced either with or without hybrid capture of barcoded libraries. Samples which were reconstructed in both conditions are labeled TRUE, samples which were reconstructed in neither are labeled FALSE, and samples reconstructed only when hybrid capture was applied are labeled SAVED. Saved samples are biased toward higher Ct. (E) Reconstructed genome length is plotted for both samples to which hybrid capture was and was not applied. Genome lengths are longer when samples are treated with hybrid capture. (F) Uncalled bases are plotted for both samples to which hybrid capture was and was not applied. Samples have fewer uncalled bases on average when hybrid capture is applied. 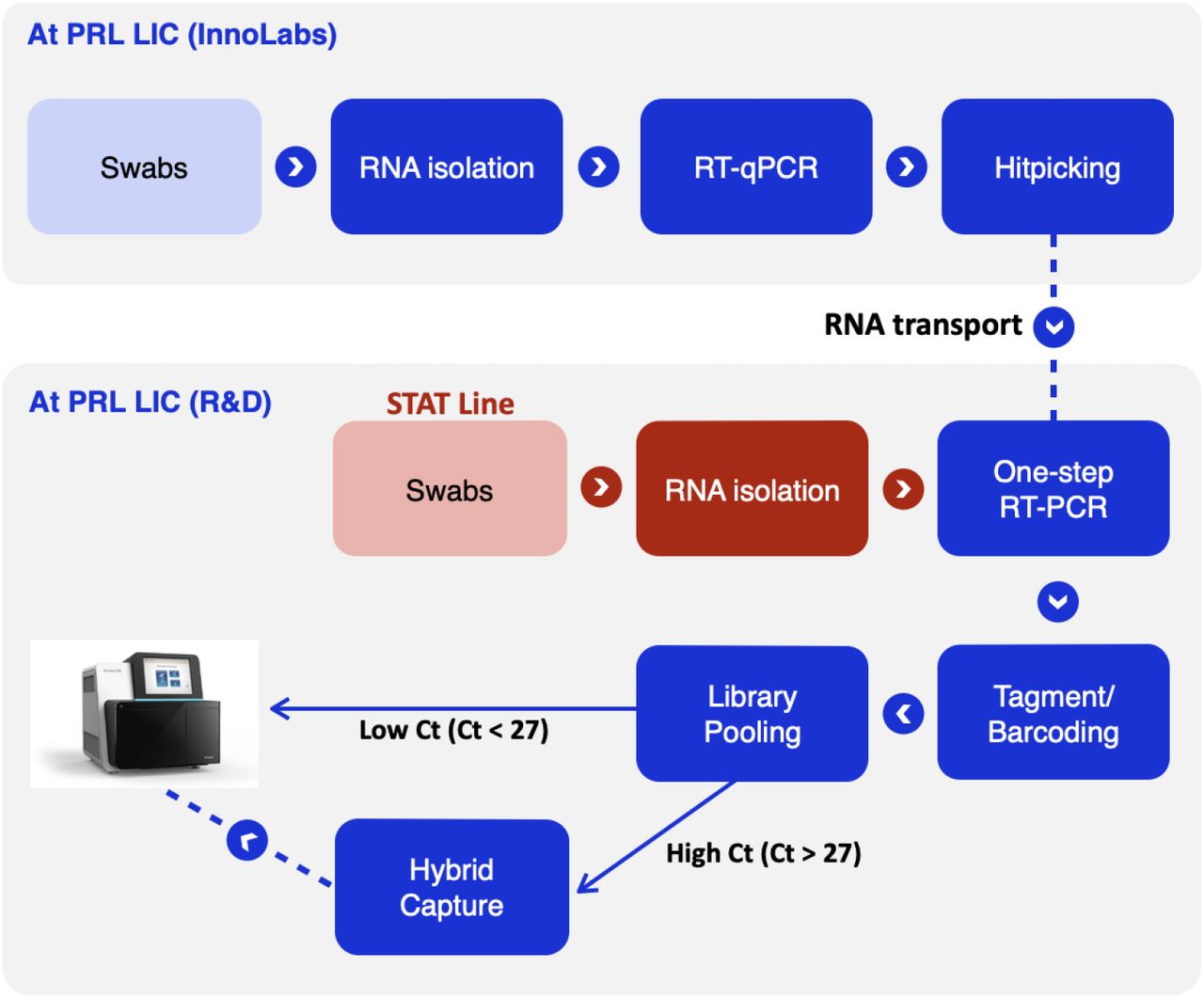 Figure Lengend Snippet: PRL integrated pipeline for COVID-19 testing and sequencing. The integrated pipeline begins with RNA extraction and RT-qPCR-based testing of incoming patient samples at the InnoLabs facility. After categorizing samples as either PCR-positive or negative, residual RNA from samples which are positive for SARS-CoV-2 RNA are automatically identified and reformatted, or “hitpicked”, into 384-well plates for processing in our sequencing pipeline. The positive samples are then converted to DNA using multiplexed RT-PCR, and tagmentation-based library prep and barcoding is performed on the resulting cDNA. Samples are then pooled separately into low Ct and high Ct bins, and the samples in the high Ct bin go through an extra step of hybrid capture before being sequenced on an appropriate Illumina platform. A parallel workflow to directly accept specimens from external facilities (the STATseq line) was also established. Specimens diagnosed as positive by the external platform are extracted in the R D facility and fed directly into the sequencing pipeline. See Materials and Methods for more detail on all steps of the pipeline.