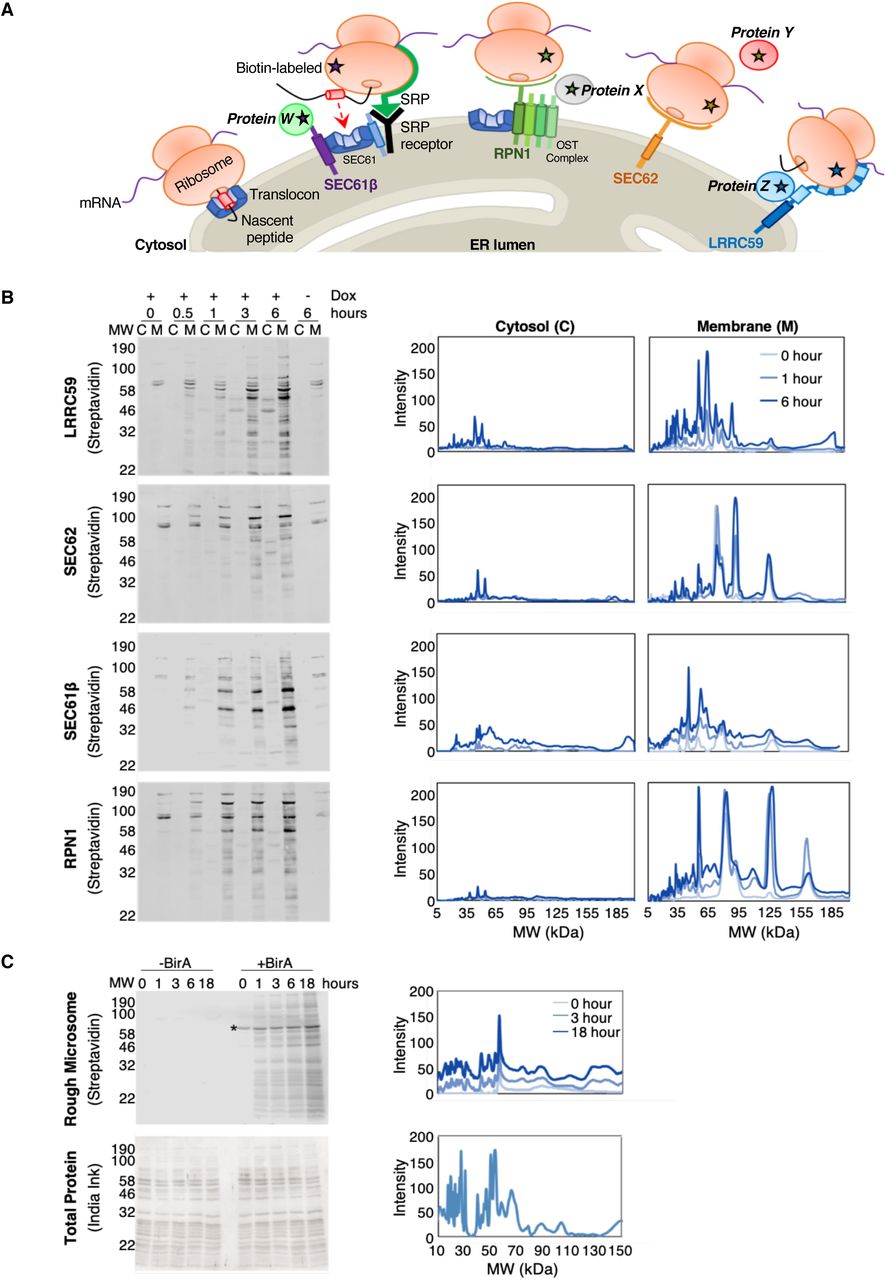 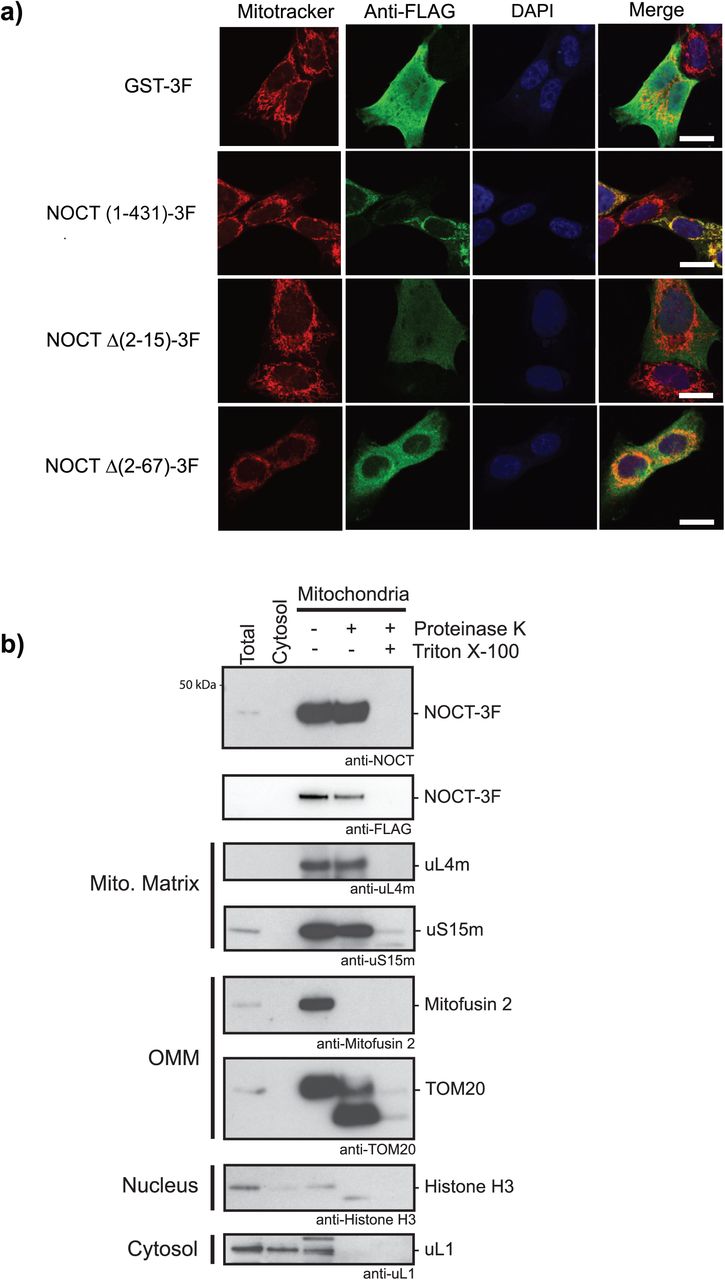 Figure Lengend Snippet: NOCT protein is localized to the mitochondria, dependent on its N-terminal mitochondrial targeting sequence. a) Immunofluorescence analysis of intracellular localization of NOCT constructs. NOCT-3F is localized to the mitochondria whereas NOCT Δ( 2 - 15 )-3F and NOCT Δ( 2 - 67 )-3F constructs, which lack the MTS, are predominantly localized to the cytoplasm. The NOCT expression plasmids indicated on the left were transfected into 143B human osteosarcoma cells and visualized using anti-FLAG monoclonal antibody immunofluorescence against the C-terminal 3x-FLAG epitope on each construct with Alexa Fluor Plus 488 secondary antibody (green). Mitochondria are visualized with MitoTracker Red CMXRos (red) and nuclei are visualized with DAPI (blue). GST-3F served as a control. The white scale bar is 10 µm. b) NOCT fractionates with the mitochondria, as tested by western blotting of subcellular fractions (including total, cytosol, and mitochondria) prepared from HEK293T cells that were transfected with NOCT (1-431)-3F. The mitochondrial fractions were divided into three equal aliquots and were either left untreated or were treated with Proteinase K or Proteinase K with Triton X-100. The fractions were then analyzed by SDS PAGE and western blotting with the indicated antibodies. NOCT was detected using guinea pig polyclonal anti-NOCT and goat monoclonal anti-DDDDK (FLAG) antibodies. Fractionation was validated using the following antibodies: anti-uL4m and anti-uS15m for the mitochondrial matrix, anti-Mitofusin 2 and anti-TOM20 for the outer mitochondrial membrane, anti-Histone H3 for the nucleus, and anti-uL1 for the cytoplasm.

Article Snippet: of cells For subcellular fractionation of NOCT (1-431)-3F HEK293T cells, mitochondrial isolation was performed as previously described, with the omission of the sucrose gradient step ( ).

Figure Lengend Snippet: Digestion of different regions of the rDNA units with MNase. (A) Isolated 1- to 16-h embryonic nuclei were digested with MNase (0.5 U/μl) at 24°C for 0, 1, or 4 min (lanes 2 to 4 of each panel). Purified (protein-free) genomic DNA was

Article Snippet: For micrococcal nuclease (MNase) digestion, the nucleus solutions were made 3 mM CaCl2 and 0.5 units/μl () and incubated at 24°C for the specified time. Figure Lengend Snippet: Twinkle is membrane associated. ( A ) Isolated mitochondria of HEK293E cells were subjected to either KCl or sodium carbonate extraction (Na 2 CO 3 ) as described in the main text. Endogenous Twinkle was detected using a monoclonal antibody and blots were re-probed with antibodies for TFAM and mtSSB. Results show that endogenous Twinkle fractionates mostly to the pellet fraction using both methods illustrating its strong membrane association, similar to overexpressed Twinkle ( Supplementary Figure S6C ), whereas TFAM and mtSSB mostly became soluble, in particular, in combination with 0.5 M KCl and sonication. Please note that to detect Twinkle with confidence, more protein was used for these western blots sometimes resulting in overloading of TFAM. Sonication in combination with DNAseI (D) or DNaseI/RNase A (R, RNase)/Benzonase ( B ) released more TFAM and mtSSB than sonication alone, showing that a proportion of TFAM and mtSSB can be found in the insoluble fractions of the various experiments by means of their interaction with mtDNA (rightmost blot panel A). (B) Na 2 CO 3 fractionation shows that overexpressed Twinkle–Myc is almost exclusively in the pellet (p) fraction again indicative of tight membrane association, whereas TFAM is partially soluble (s = supernatant) (left panel). Treatment of the Na 2 CO 3 pellet fraction by DNAseI and subsequent re-extraction using Na 2 CO 3 further released a proportion of TFAM (middle panel). Finally, Na 2 CO 3 in combination with Triton-X100 (TX100) treatment solubilized both Twinkle–Myc and endogenous TFAM (right panel). ( C ) Similar to results shown in panel A, sonication in combination with DNAseI ( D ) or DNaseI/RNase A (R, RNase)/Benzonase (B) released more TFAM than sonication alone or combined with RNase treatment, showing that a proportion of TFAM can be found in the insoluble fractions of the various experiments by means of its interaction with mtDNA, whereas in this case, overexpressed Twinkle–Myc remains in the pellet fraction with all treatments. (D) Digitonin-based isolation of a mitochondrial membrane fraction again showed the retention of Twinkle and proportions of nucleoid-associated proteins such as TFAM, mtSSB and POLG1 (see main text and Supplementary Figure S6D ). This membrane fraction (marked as ‘Digitonin pellet’) was here subjected to flotation by layering a gradient of iodixanol on top of this fraction that was first re-solubilized with 1% TX100 (see ‘Materials and Methods’ for details). The gradient was then subjected to ultracentrifugation. In parallel, a mitochondrial fraction that was directly solubilized by 1% TX100 (marked as ‘TX100’) was subjected to the same procedure. Collected fractions were isolated as indicated and subjected to western blot analysis as well as dot blot analysis to detect mtDNA. The results show that mtDNA and nucleoid-associated proteins in the digitonin-lysis membrane fraction moved up the gradient to a single low-density iodixanol concentration, showing that they likely form a single complex. In contrast, COXII and a marker for the large ribosomal subunit MRPL49 have remained at relatively high-density fractions. In the total mitochondrial TX100 lysate, Twinkle and other nucleoid proteins appear more dispersed as does mtDNA.

Article Snippet: Treatment of isolated mitochondria by sonication and nucleases Mitochondria were resuspended in enzyme-buffer (50 mM Tris–HCl, pH 7.5, 50 mM NaCl, 3 mM CaCl2 , 2 mM MgCl2 ), sonicated on ice at 40% power for three times 20 s before addition of the enzymes as indicated DNase I (Fermentas) 10U, () 20 µg, Micrococcal nuclease (Fermentas) 50 U and Benzonase nuclease (Sigma) 50U, and incubated at +37°C for 30 min. Where appropriate, lysates were further subjected to carbonate extraction as described above. Article Title: Extracellular Hepatitis B Virus RNAs Are Heterogeneous in Length and Circulate as Capsid-Antibody Complexes in Addition to Virions in Chronic Hepatitis B Patients

Article Snippet: In addition to the SDS-proteinase K method, viral RNA was also extracted with according to the manufacturer’s instructions ( Scientific). Article Title: Extracellular Hepatitis B Virus RNAs Are Heterogeneous in Length and Circulate as Capsid-Antibody Complexes in Addition to Virions in Chronic Hepatitis B Patients

Figure Lengend Snippet: Mapping and identifying 3′ ends of extracellular HBV RNAs. (A) Northern blot detection of extracellular HBV RNAs with various riboprobes. Viral RNA from cytoplasmic (C) nucleocapsids (lanes 2, 5, 8, 11, 14, and 17) or culture supernatant (S) (lanes 3, 6, 9, 12, 15, and 18) of HepAD38 cells was extracted with TRIzol reagent and treated with DNase I before Northern blot analysis with plus-strand-specific riboprobes spanning the HBV genome as indicated. pgRNA was used as a reference, and map coordinates were numbered according to the sequence of the HBV genome (genotype D, accession number AJ344117.1 ). (B) Identification of 3′ ends of extracellular HBV RNAs. 3′ Ends of extracellular HBV RNAs were identified by the 3′ RACE method using different HBV-specific anchor primers (the same 5′ primers used for generating templates for producing riboprobes used in panel A, lower). Identified 3′ ends were numbered as described above, and numbers in parentheses indicate the amount of clones with the same 3′ ends. The asterisk indicates unknown nucleic acid copurified with intracellular capsid-associated viral RNA by TRIzol reagent. FL, full-length; Cap, 5′ cap of pregenomic RNA; pA, the polyadenylation site; An, poly(A) tail.

Article Snippet: In addition to the SDS-proteinase K method, viral RNA was also extracted with according to the manufacturer’s instructions ( Scientific).