Article Snippet: Amplicon libraries were generated and sequenced by a paired-end approach using the (, Berlin, Germany). 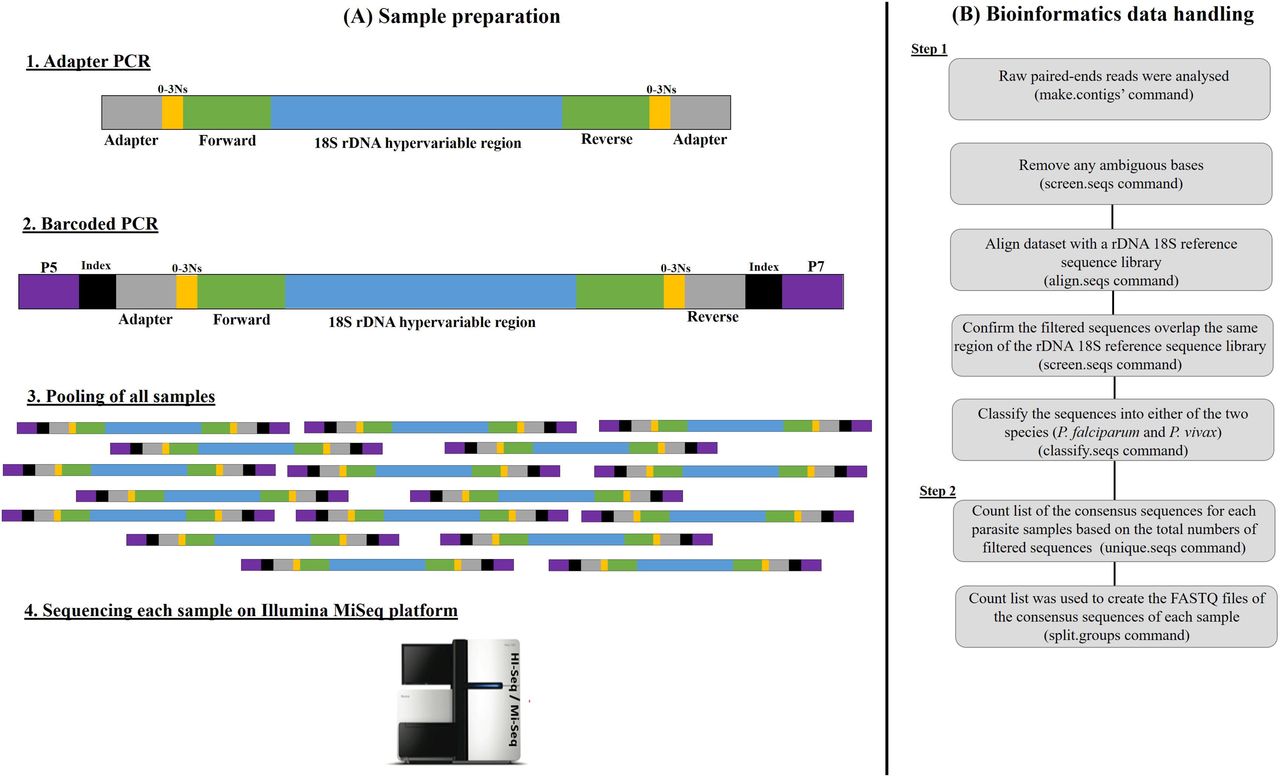 Figure Lengend Snippet: Schematic representation of the sample preparation (A) and the bioinformatics data handling (B) of the metabarcoded sequencing library. (A) In the first-round PCR amplification, overhanging forward and reverse primers were used to amplify the rDNA 18S. The adapter base pairs provide the target sites for the primers used for sequencing and the random nucleotides (0-3Ns) were inserted between the primers and the adapter to offset the reading frame, therefore amplicons prevent the oversaturation of the MiSeq sequencing channels. The second-round PCR amplification was then performed using overhanging barcoded primers bound to the adapter tags to add indices, as well as the P7 and P5 regions required to bind to the MiSeq flow cell. (B) Text files containing rDNA 18S sequence data (FASTQ files) were generated from the Illumina MiSeq binary raw data outputs, and data analyses were performed using a bespoke modified pipeline in Mothur v1.39.5 software ( Schloss et al., 2009 ) and Illumina MiSeq standard procedures ( Kozich et al., 2013 ) as described in materials and methods section 2.4 .

Article Snippet: In conclusion, we describe for the first time the use of metabarcoded DNA sequencing using an MiSeq platform to quantify P. falciparum and P. vivax, and demonstrate its accuracy on malaria-positive samples. Article Title: Optimisation of methods for bacterial skin microbiome investigation: primer selection and comparison of the 454 versus MiSeq platform

Article Snippet: The mock bacterial community had an SW diversity index (n = 4 for each platform) of 1.85 and 2 for the Roche 454 Junior and the MiSeq platforms, respectively, when calculated based on the genus level distribution (Fig.