Figure Lengend Snippet: Southern blots of Hin dIII and Hin dIII-VDE digests of DNA from spo11 strains with inserts at HIS4 (top) and at URA3 (bottom). Gel labels are as in Figure 1 ; JM—joint molecule recombination intermediates. DOI: http://dx.doi.org/10.7554/eLife.19669.015 Figure Lengend Snippet: Spo11-initiated events at the two insert loci. ( A ) Spo11-catalyzed DSBs are more frequent at HIS4 that at URA3 . Left—Southern blots of Eco RI digests of DNA from vde∆ strains, probed with pBR322 sequences, showing Spo11-DSBs in the Parent 2 insert (see Figure 1 ) in resection/repair-deficient sae2∆ mutant strains. Right—location of DSBs and probe and DSB frequencies (average of 7 and 8 hr samples from a single experiment; error bars represent range). Spo11-DSBs in the Parent 1 inserts at HIS4 and URA3 were at different locations within the insert, but displayed similar ratios between the two loci (data not shown). ( B ) Southern blots of Hin dIII digests of DNA from vde∆ strains, to detect total Spo11-initiated crossovers. ( C ) Southern blots of Hin dIII-VDE double digests of the same samples, to determine the background contribution of Spo11-initiated COs in subsequent experiments measuring VDE-initiated COs, which will be VDE-resistant due to conversion of the VRS site to VRS103 . Probes were as shown in Figure 1 . ( D ) Quantification of data in panels B (total COs; filled circles) and C (VDE-resistant COs; open circles). Data are from a single experiment. DOI: http://dx.doi.org/10.7554/eLife.19669.004

Figure Lengend Snippet: 70–80% of VDE-DSBs are repaired. ( A ) Fraction of inserts remaining, calculated using Hin dIII digests (see Figure 1 ). For the arg4-VRS103 insert, the ratio (Parent 2 + CO2)/ (0.5 x LC) was calculated at 9 hr, and was then normalized to the 0 hr value. For the arg4-VRS insert, a similar calculation was made: (Parent 1 + NCO + CO1)/(0.5 x LC) ( B ) Relative recovery of interhomolog recombination products, calculated using Hin dIII-VDE double digests (see Figure 1 ). The sum of CO (average of CO1 and CO2) and NCO frequencies was divided by the frequency of total DSBs, as calculated in Figure 2A . Data are the average of two independent experiments; error bars represent range. DOI: http://dx.doi.org/10.7554/eLife.19669.006 Figure Lengend Snippet: Southern blots of Hin dIII and Hin dIII-VDE digests of DNA from HIS4 insert-containing strains (top) and from URA3 insert-contaning strains (bottom). Gel labels are as in Figure 1 ; JM—joint molecule recombination intermediates. In the gel with Hin DIII digests of samples from a pch2∆ mm4-mn yen1∆ slx1∆ strain with inserts at URA3 , the 9 hr sample was originally loaded between the 4 and 5 hr samples; this image was cut and spliced as indicated by vertical lines for presentation purposes. DOI: http://dx.doi.org/10.7554/eLife.19669.012 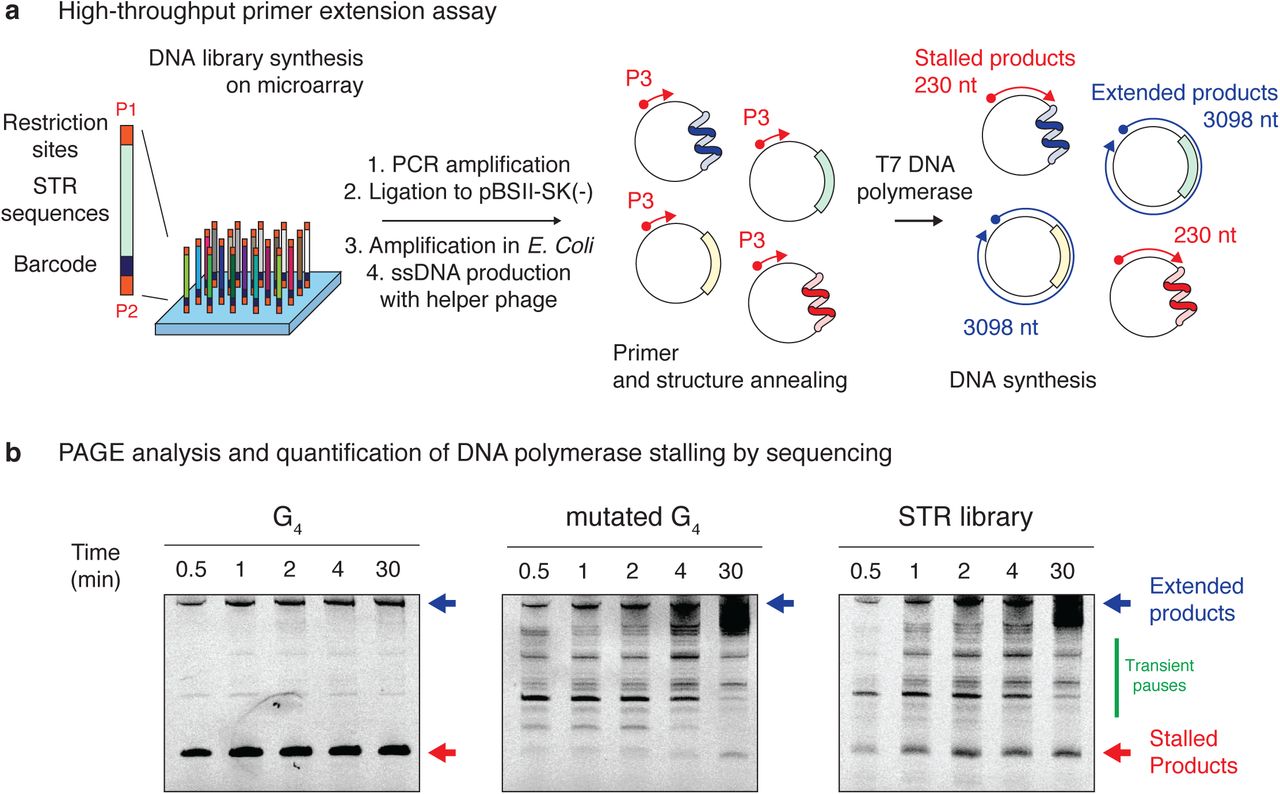 Figure Lengend Snippet: Pooled measurement of DNA polymerase stalling at STRs. (a) Overview of the high-throughput primer extension assay used to monitor DNA synthesis at designed sequences. A library of 20,000 sequences comprising all STR permutations at three different lengths together with control structured DNA sequences was synthesised on a programmable microarray, eluted and inserted into a phagemid vector. After PCR amplification, insertion into a phagemid vector and bacterial amplification, circular single-stranded DNA templates were produced using a M13KO7 helper phage. Fluorescently labelled primer (P3) and structures annealing were performed before initiating DNA synthesis through the addition of T7 DNA polymerase. Primers are then either fully extended to the length of the circular template or the extension is stopped within STRs if the DNA polymerases stall at structured DNAs. (b) Extended and stalled products were then analysed by denaturing Poly Acrylamide Gel (PAGE) electrophoresis, recovered from the gel matrix and prepared for high throughput sequencing. DNA polymerase stalling was then quantified by analysing the enrichment of each sequence form the library in the stalled and extended fractions. Representative fluorescence gel imaging of primer extension reactions on templates containing a G-quadruplex (G4) structure, a mutated G4 or the entire DNA library, stopped after the indicated times, are reported for comparison. Blue and red arrows indicate the position of the extended and stalled products respectively. The green line highlights the presence of transient stall sites that disappear overtime.

Article Snippet: Ligation and transformation Purified DNA library (250 ng) was cut with the and Bam HI restriction enzymes () for 1h at 37 °C in a reaction mixture containing 1X of the NEB cut smart buffer. 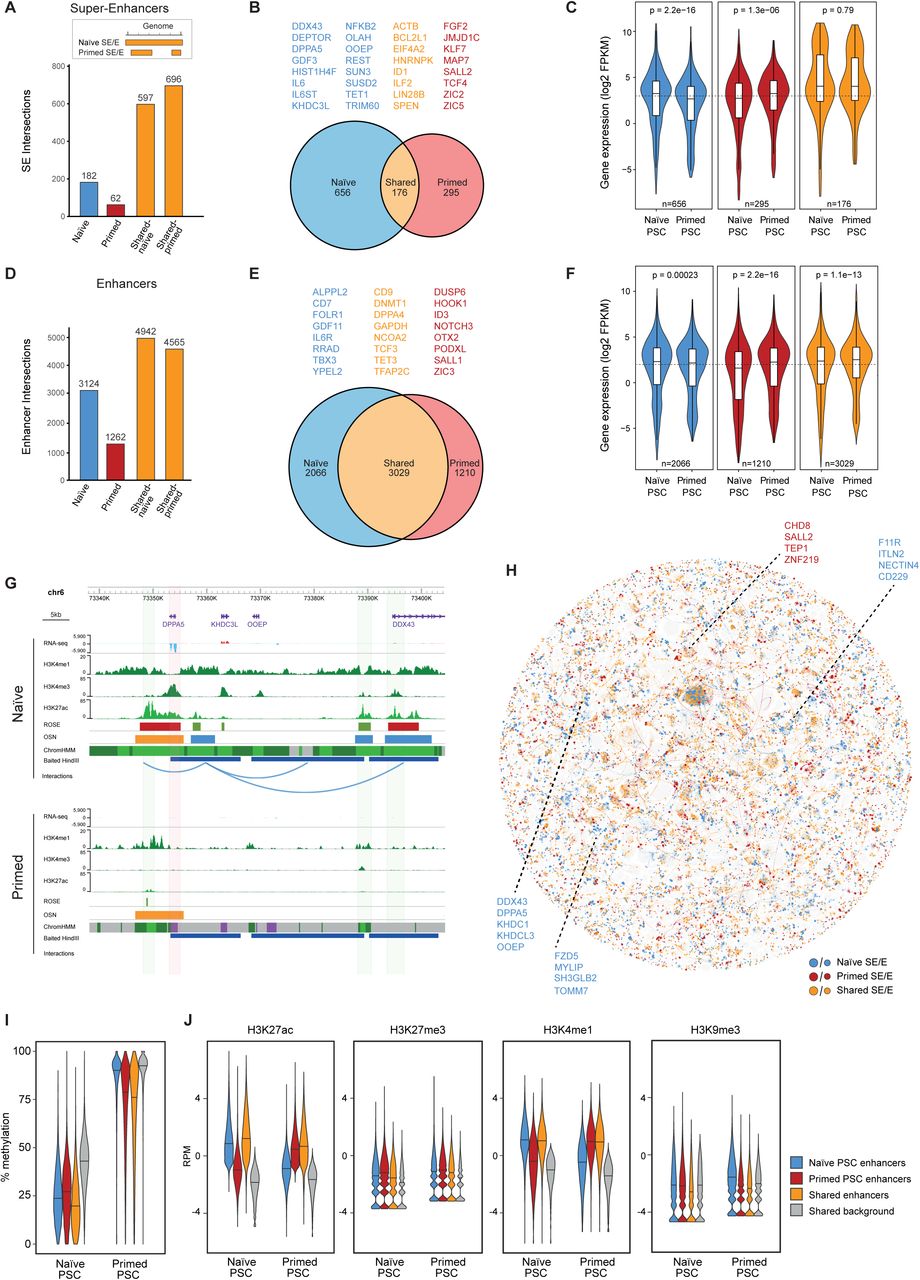 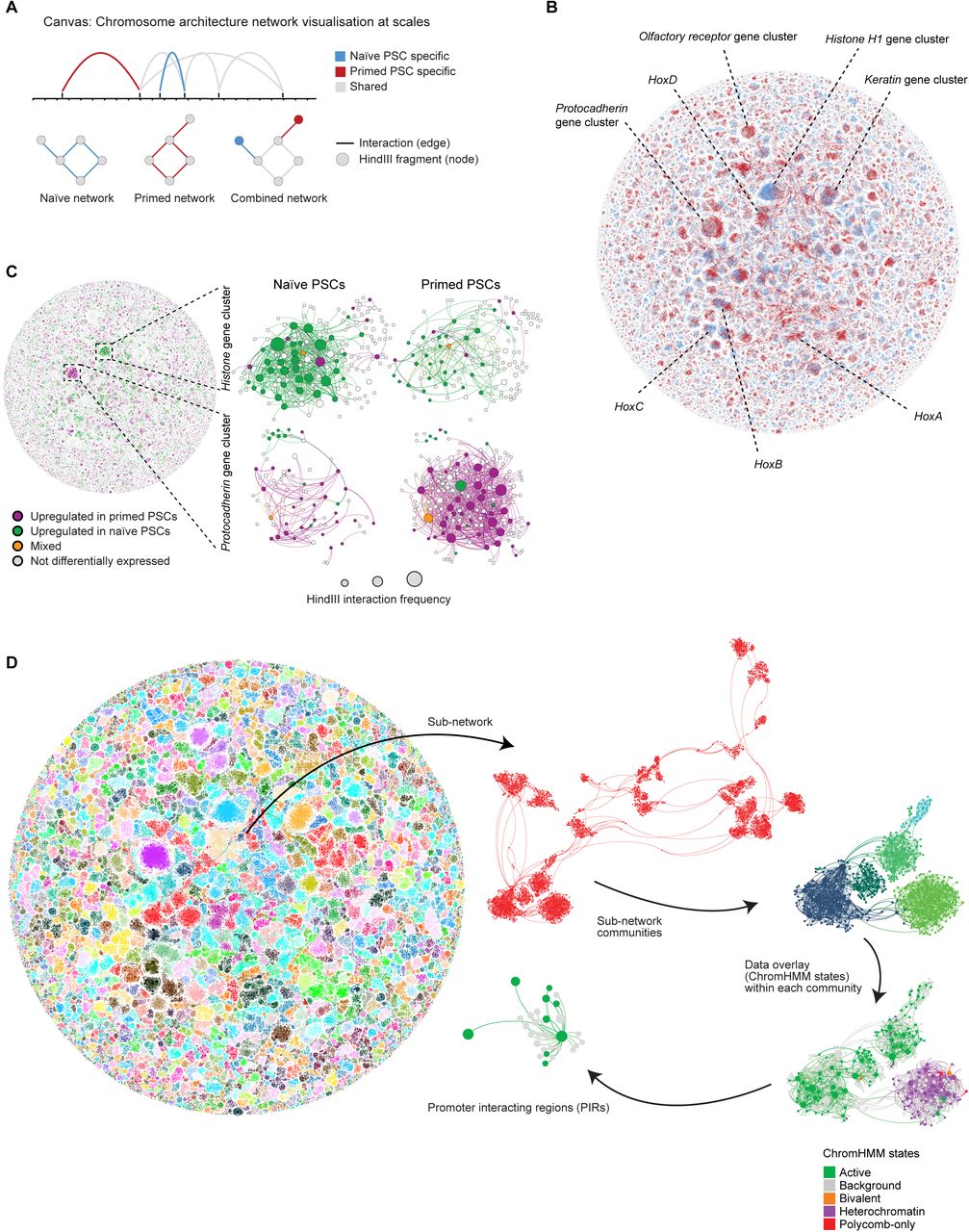 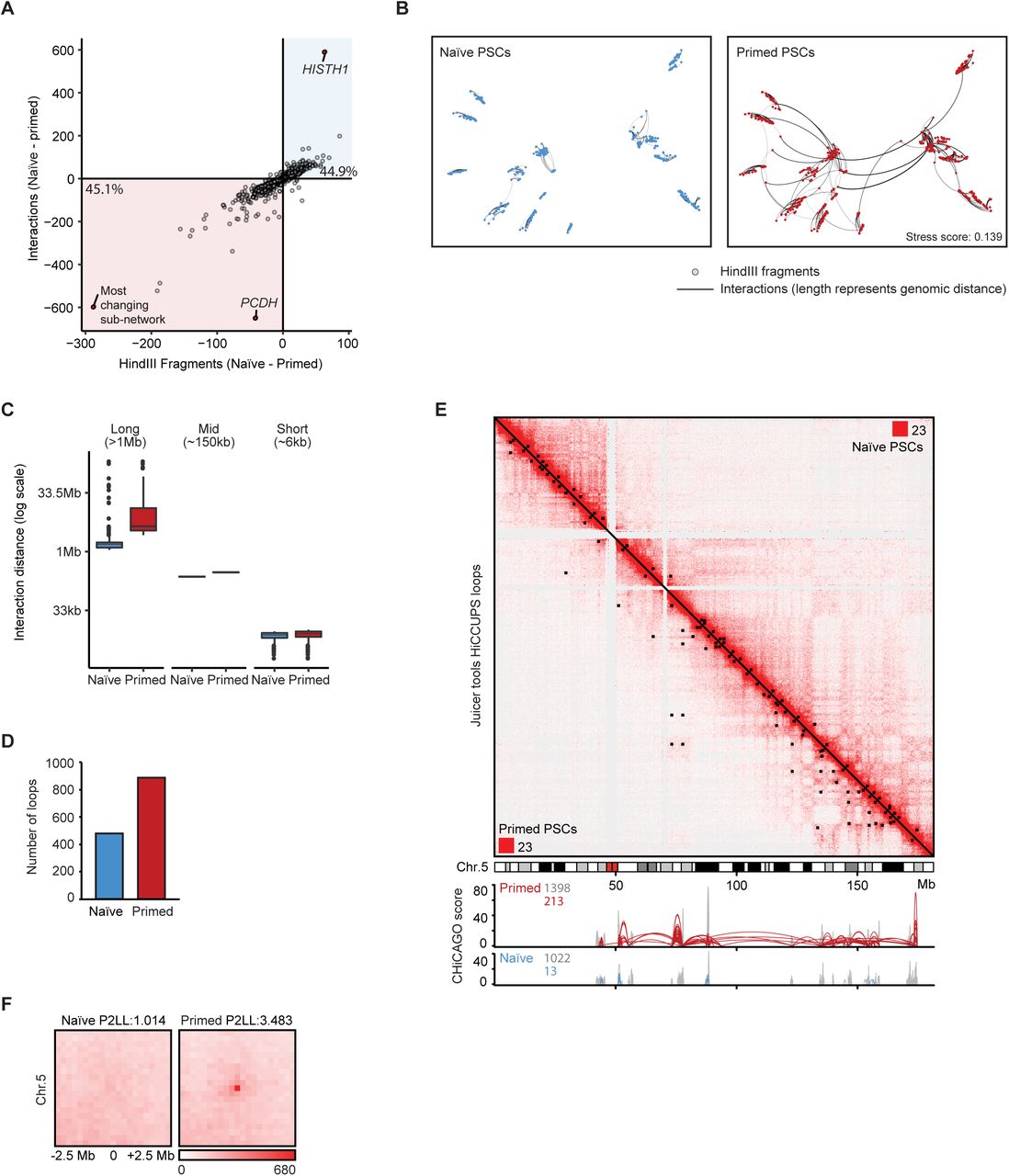 Figure Lengend Snippet: Long-range promoter interactions in primed PSCs drive genome conformation changes between pluripotent states. (A) Plot shows the number of interactions (edges) and the number of interacting HindIII fragments (nodes) for each sub-network in naïve and primed PSCs. Each small circle represents a different sub-network. The lower-left quadrant contains larger sub-networks in primed PSCs, and the upper-right quadrant contains larger sub-networks in naïve PSCs. The protocadherin ( PCDH ), histone H1 ( HISTH1 ) and ‘most changing’ (containing diverse genes) sub-networks are highlighted in red. (B) Multidimensional scaling representation (MDS) of the ‘most changing’ sub-network plotted using the linear genomic distance between nodes as edge weights. The measured stress score of 0.139 indicates there is a reasonable fit between the linear genomic distances and the spacing of the nodes as determined by MDS ( Kruskal and Wish, 1978 ). (C) Plot shows the distribution of linear genomic distances between interacting nodes in naïve and primed PSCs, binned into long-, mid-, and short-range distances. (D) Chart shows the total number of chromatin loops identified on chromosome 5 in naïve and primed PSCs. (E) Hi-C interaction matrix of chromosome 5 at a resolution of 250 kb with Knight-Ruiz (KR) normalisation; upper right, naïve PSCs; lower left, primed PSCs. Areas of contact enrichment were defined separately for naïve and primed PSCs using HiCCUPS and each cell type-specific set of chromatin interactions are highlighted as a black square on their respective heatmap. The two corner numbers indicates the maximum intensity values for the matrix. The tracks below the Hi-C heatmap show the PCHi-C interactions and ChiCAGO scores over the same region. (F) Heatmap shows the aggregate peak analysis (250 kb resolution) of primed-specific chromatin interactions on chromosome 5 for naïve and primed PSCs. Chromatin interactions > 5 Mb from the diagonal were used for the analysis (n=27 loops out of a total of 76). The ‘peak to lower left’ (P2LL) score denotes the enrichment of the central pixel over the pixels in the lower left quadrant. See also Figures S3 and S4 . 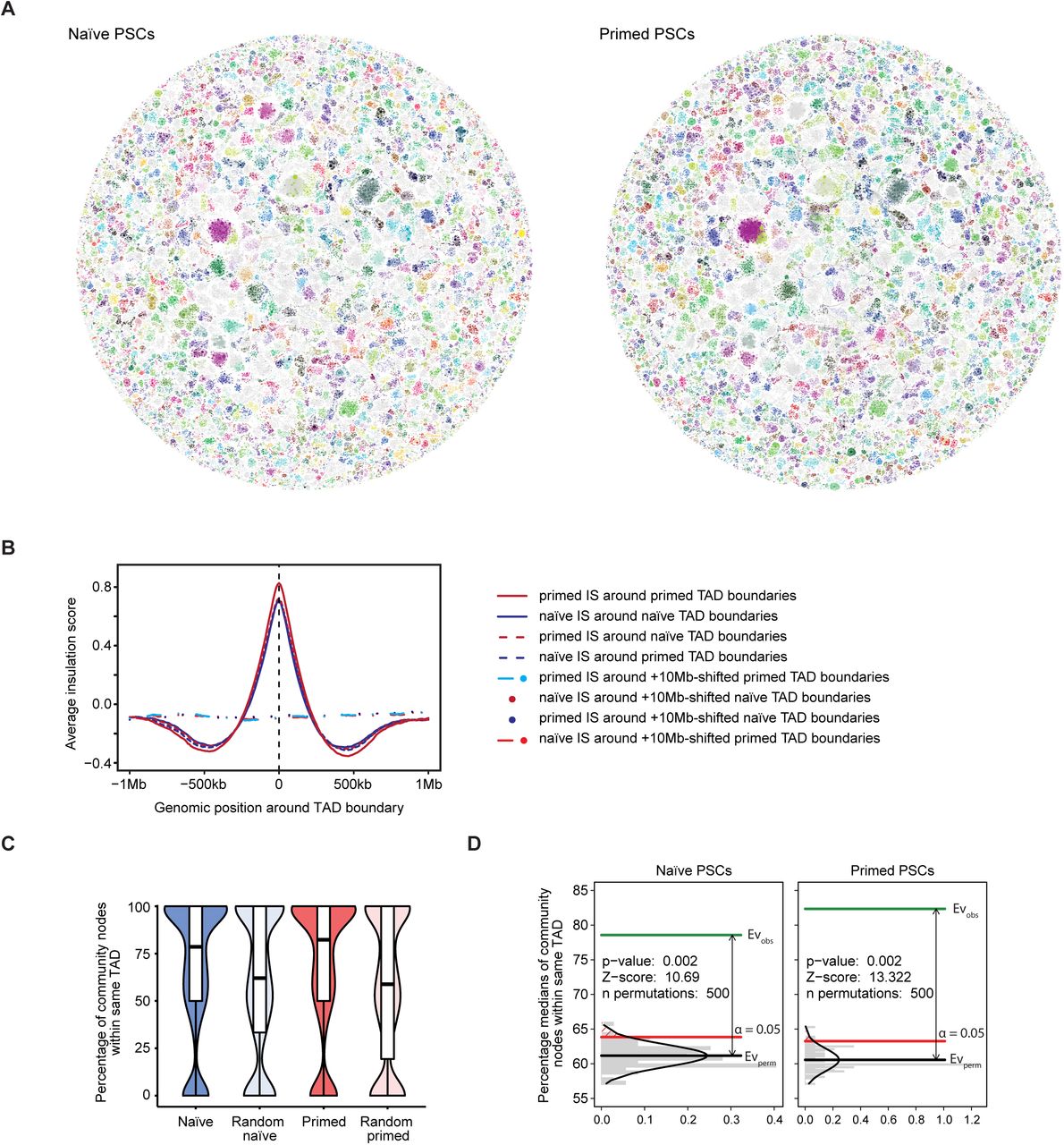 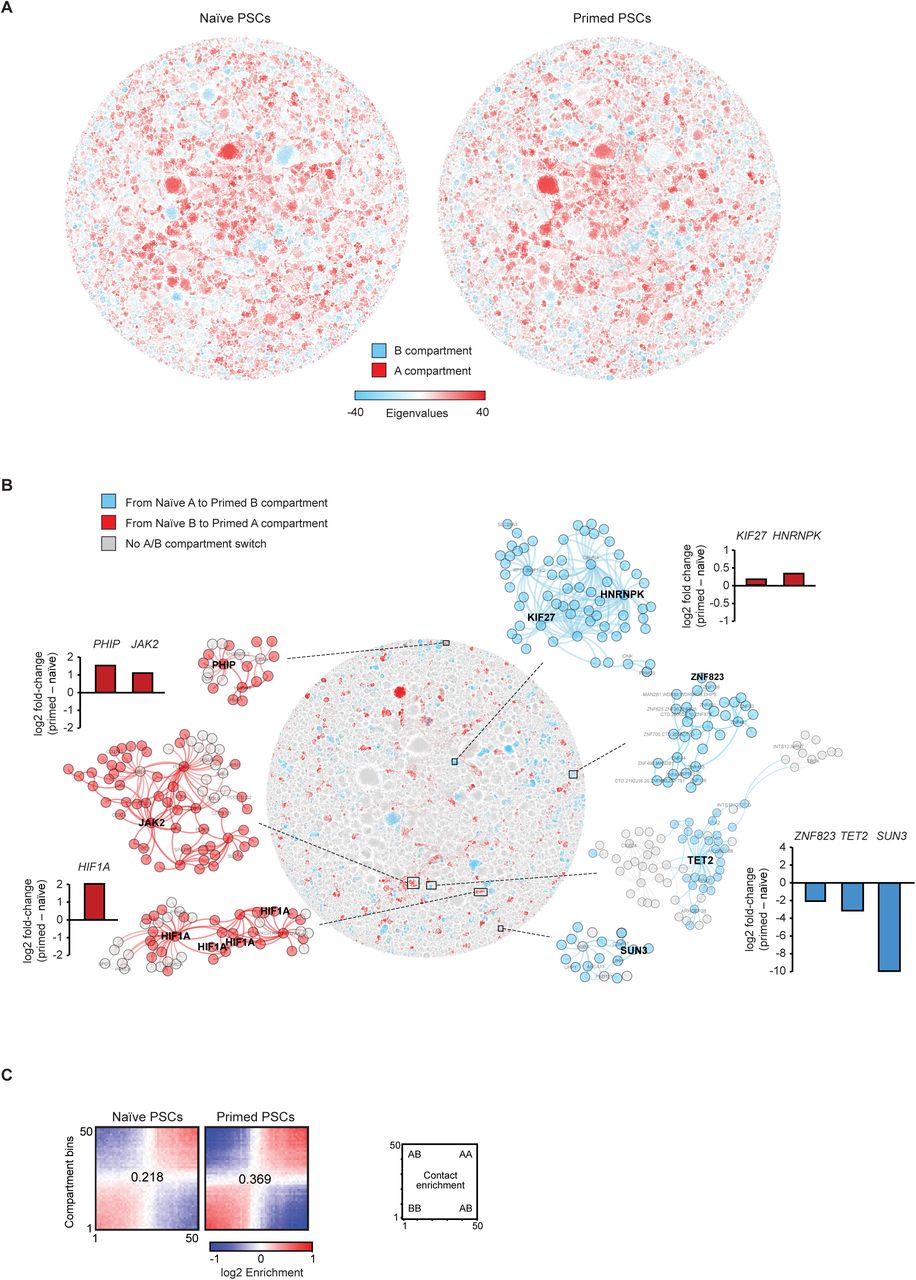 Article Snippet: RFLP In order to determine the presence of different alleles of Pv AMA-1 gene in the region, PCR–RFLP technique was done to digest the gene using three restriction enzymes EcoR-1, Pvu-II and ( cat No #ER0271, #ER0631 and ferments cat No #ER0501 respectively) according to the manufacturer’s recommendations. Article Snippet: The mutated sequences were verified by DNA sequencing. ( To construct a plasmid that overproduces PhaQ in B. megaterium , a 490-bp DNA fragment carrying the Shine-Dalgano sequence plus the phaQ gene and flanked by EcoRI and was amplified by PCR and cloned between the EcoRI and HindIII sites of pHY300PLK ( Shuzo Co. Ltd., Kyoto, Japan) to generate plasmid pGS1056. Article Title: IS1630 of Mycoplasma fermentans, a Novel IS30-Type Insertion Element That Targets and Duplicates Inverted Repeats of Variable Length and Sequence during Insertion

Figure Lengend Snippet: Identification of multiple copies of IS 1630 in M. fermentans strains. Genomic DNA from M. fermentans PG18 (lanes 2 and 4) or II-29/1 (lanes 3 and 5) was digested with Eco RI (lanes 2 and 3) or Hin dIII (lanes 4 and 5), transferred to a nylon membrane, and hybridized with DIG-labeled oligonucleotide probe 5 (see Materials and Methods). Lane 1 contains DIG-labeled lambda Hin dIII markers (Boehringer), the sizes of which are indicated in kilobase pairs. Article Title: Hsa-miR-24-3p Increases Nasopharyngeal Carcinoma Radiosensitivity by Targeting Both the 3’UTR and 5’UTR of Jab1/CSN5

Article Snippet: Inserts were retrieved with and Spe I and cloned into the same sites of pMIR-REPORT Lucirefase vector () downstream of the firefly open reading frame (ORF) for the Jab1 3’UTR and 5’UTR and in the BamH1 site (pMIR-REPORT) upstream of the luciferase ORF for the Jab1 5’UTR Upstream.

Article Title: In Vitro Evaluation of Vegf-Pseudomonas Exotoxin: A Conjugated on Tumor Cells Article Title: Alpha Alumina Nanoparticle Conjugation to Cysteine Peptidase A and B: An Efficient Method for Autophagy Induction

Article Snippet: CPB- and CPA-coding DNA was then sub-cloned by insertion between BamHI and in pET28a (expression vector) (, USA).

Figure Lengend Snippet: Transgene constructs and RSPO2 expression in transgenic mice. (A) Schematic presentation of transgene constructs for generation of transgenic mice. The muscle-specific MCK promoter and the SMN-specific VAChT promoter were inserted 5′ to the human RSPO2 gene. Three copies of FLAG cDNA (3 X FLAG) were inserted 3′ to RSPO2 . N, Not I; H, Hin dIII; X, Xba I; and E, Eco RI. (B) Immunofluorescent staining of sections of the tibialis anterior (TA) muscle and spinal cord of wild-type (WT) and transgenic adult mice with anti-FLAG antibody. FLAG-tagged Rspo2 was detected in the tibialis anterior of MCK -RSPO2 mice and in the spinal cord of VAChT -RSPO2 mice. A, anterior; and P, posterior. Scale bar =100 μm. (C) Immunofluorescent staining of the spinal cord of VAChT -RSPO2 transgenic adult mice with anti-FLAG (green) antibody for detecting Rspo2 and anti-ChAT (red) antibody for visualizing SMNs. FLAG-tagged Rspo2 was primarily expressed in ChAT-positive SMNs, but leaky expression was also observed in a small fraction of cells. Scale bar =100 μm. (D) Quantitative RT-PCR of Rspo2 transcripts. Total RNA was isolated from the diaphragms and spinal cords of wild-type (WT), Rspo2 −/− , MCK -RSPO2/Rspo2 −/− , and VAChT- RSPO2/Rspo2 −/− embryos at E18.5. Values are normalized to Gapdh . The normalized Rspo2 expression levels are plotted relative to that in the WT diaphragm to make direct comparisons between the diaphragm and spinal cord possible. Mean and SEM ( n = 3) are indicated.

Article Snippet: To generate CMV-RSPO2 , the coding region of RSPO2 cDNA was amplified from the clone by PCR (see Supplementary Table ) and was inserted into the and Xba l sites of the CMV-driven expression vector, p3XFLAG-CMV-14 ().

Figure Lengend Snippet: Analysis of plasmid copy number. Strains were retransformed with pSEL1 and pSEL2 encoding rhomboid-Rv1337 and were grown to mid-log phase. Samples were normalized based on OD 600 and were column purified along with HindIII-digested pUC19 plasmid as an internal purification control. The samples were then analyzed on an agarose gel.

Article Snippet: This fragment was then placed between the KpnI and in the MCS of pBAD/HisA (). Article Title: A universal vector concept for a direct genotyping of transgenic organisms and a systematic creation of homozygous lines

Figure Lengend Snippet: The pAVOIAF{#1–#2–#3–#4} vector. ( A ) Vector map of pAVOIAF{#1–#2–#3–#4}. The vector is based on the pUC57-Kan vector, from which only the kanamycin resistance cassette and the origin of replication remain. The four-slot cloning site together with the 3’ and 5’ piggyBac terminal repeats is located between the AatII and PciI sites. The light gray band on the inside indicates the transgene. ( B ) Scheme of the four-slot cloning site. Each slot consists of an 18 bp spacer that translates into the amino acids Phe-Arg-Glu-Asp-Asp-Tyr and thus was termed FREDDY spacer. The slots can be accessed individually by unique restriction enzyme site pairs (XmaI/SpeI for #1, HindIII/XbaI for #2, XhoI/NheI for #3 and AflII/AvrII for #4). They are embedded into five PmeI restriction enzyme sites that allow a simple one-enzyme control digestion to determine the size of the sequences that were inserted into the slots. For convenience, the downstream restriction enzyme sites for each slot (SpeI for #1, XbaI for #2, NheI for #3 and AvrII #4) result in identical sticky ends, facilitating cloning procedures that cannot utilize the suggested restriction enzyme site pairs. Extends of the genetic elements are not to scale. ORF, open-reading frame.

Article Snippet: Molecular biology: the pGS[#P’#O(LA)-mEmerald] and pAGOC{#P’#O(LA)-mEmerald} vectors A hybrid sequence, consisting of (i) a , (ii) the modular fluorescent protein expression cassette as described above and (iii) a XbaI site, was de novo synthetized and inserted into the unique SfiI site of pMK-RQ ( Scientific). Figure Lengend Snippet: Southern and Northern analysis confirming Zfp36L1 targeting in ES cells. (A and B) Southern blots of mouse tail DNA from WT and Het. mice. (A) HindIII/XbaI cleavage of DNA and hybridization with the Zfp36L1 5′-flanking probe generated a diagnostic

Article Snippet: The PCR product was cut with BamHI and , gel purified, and then ligated with BamHI- and HindIII-cut Bluescript KS+ ().

Article Snippet: The genomic DNA and control pMT85 plasmid digestion were performed at 37°C overnight with ().