Figure Lengend Snippet: Identification of PPM1A as a protein that interacts with STING. (A) Purified GST–PPM1A interacted with His–STING (amino acids 153–379) in an in vitro protein-binding assay. Purified His–STING (amino acids 153–379; 1 μg) was incubated with purified GST–PPM1A (1 μg) or GST (1 μg), and then pulled down with glutathione–Sepharose beads. Western blots were performed to analyze the presence of His-tagged STING and GST-tagged PPM1A proteins. (B, C) Epitope-tagged PPM1A and STING interacted with each other in HEK293 cells. HEK293 cells were transfected with the indicated DNA plasmids. At 24 h post-transfection, the lysates were immunoprecipitated with anti-Myc beads (B) or anti-HA beads (C), followed by immunoblotting analysis with the indicated antibodies. WCL (bottom), expression of exogenous proteins in whole-cell lysates. (D) More PPM1A proteins were found to be present in the STING immunoprecipitates after HSV-1 virus infection. THP-1 cells were infected with or without HSV-1 at 5 MOI for the indicated times. The cells were lysed and immunoprecipitated with rabbit anti-STING antibody or an IgG control antibody. Immunoprecipitates were analyzed by immunoblotting with the anti-PPM1A and anti-STING antibodies. Expression levels of endogenous PPM1A and STING were detected with an immunoblotting analysis. (E, F) Epitope-tagged PPM1A and TBK1 interacted in HEK293 cells. Transfection and co-immunoprecipitation experiments were performed as in B and C, except that Flag-TBK1 expression vector was used instead of STING-Myc. (G) PPM1A is co-localized with both STING and TBK1 in transfected Hela cells. Hela cells were transfected with the indicated plasmids for 24 h, and then fixed with 4% paraformaldehyde, stained with the indicated antibodies, and observed with confocal microscopy.

Article Snippet: The fusion proteins were purified from the cell lysates using () or Ni–Sepharose beads (GE), according to protocols of the manufacturers. Figure Lengend Snippet: Protein-protein interaction of SmTRs with SmRXR1 . GST pull down shows that both SmTRα and SmTRβ can form a heterodimer with SmRXR1 in vitro . 35 S-labeled SmRXR1 was synthesized in vitro using pCITE-SmRXR1 as template and then incubated with GST-SmTRα(LBD), GST-SmTRβ(LBD) or GST (negative control) protein affixed to glutathione-Sepharose beads. The beads were collected, washed and the bound protein was resolved on 10% SDS acrylamide gel and visualized by autoradiography.

Article Snippet: E. coli AD 494 (DE3) pLys S competent cells (Novagen) were transformed with pGEX-SmTRα(LBD) or pGEX-SmTRβ(LBD) and the GST fusion proteins were purified by passage over a according to standard protocols. pCITE-SmRXR1 was transcribed and translated using the Single Tube Protein System () following the manufacture's protocol to produce 35 S labeled protein.

Figure Lengend Snippet: Association of recombinant GST-Pfcrk-3 with histone H1 kinase activity. (A) Pulldown experiments using wild-type GST-Pfcrk-3. One microgram of GST-Pfcrk-3 (lanes 2 and 4) or GST alone (lanes 1 and 3) bound to glutathione-agarose beads was incubated in

Article Snippet: The resulting supernatant was incubated with () for 1 h. The resin was washed four times with sonication buffer and once with a buffer containing 50 mM Tris-HCl (pH 8.7)-75 mM NaCl.

Article Title: Novel G-Protein Complex Whose Requirement Is Linked to the Translational Status of the Cell

Figure Lengend Snippet: Hbs1p interacts with Dom34p. (A) Gal4DBD-Hbs1p and Gal4ACT-Dom34p fusion proteins were assayed for interaction in two-hybrid reporter strain pJ69-4A on C-Leu-Trp-His + 1 mM 3-AT and on C-Leu-Trp-Ade plates. Gal4DBD-Snf1p and Gal4ACT-Snf4p serve as positive control for an interaction and as negative controls for the interaction with the Hbs1p and Dom34p fusions. (B) Twenty micrograms of protein extracts was prepared from yeast strain TKY514 expressing Dom34p-triple-HA-tag (HA 3 ) and either the full-length, aa-1-to-161, or aa-162-to-611 form of GST-tagged Hbs1p, incubated with 20 μl of 50% glutathione Sepharose 4B slurry, washed three times with 150 mM KCl buffer, and analyzed by Western blotting. 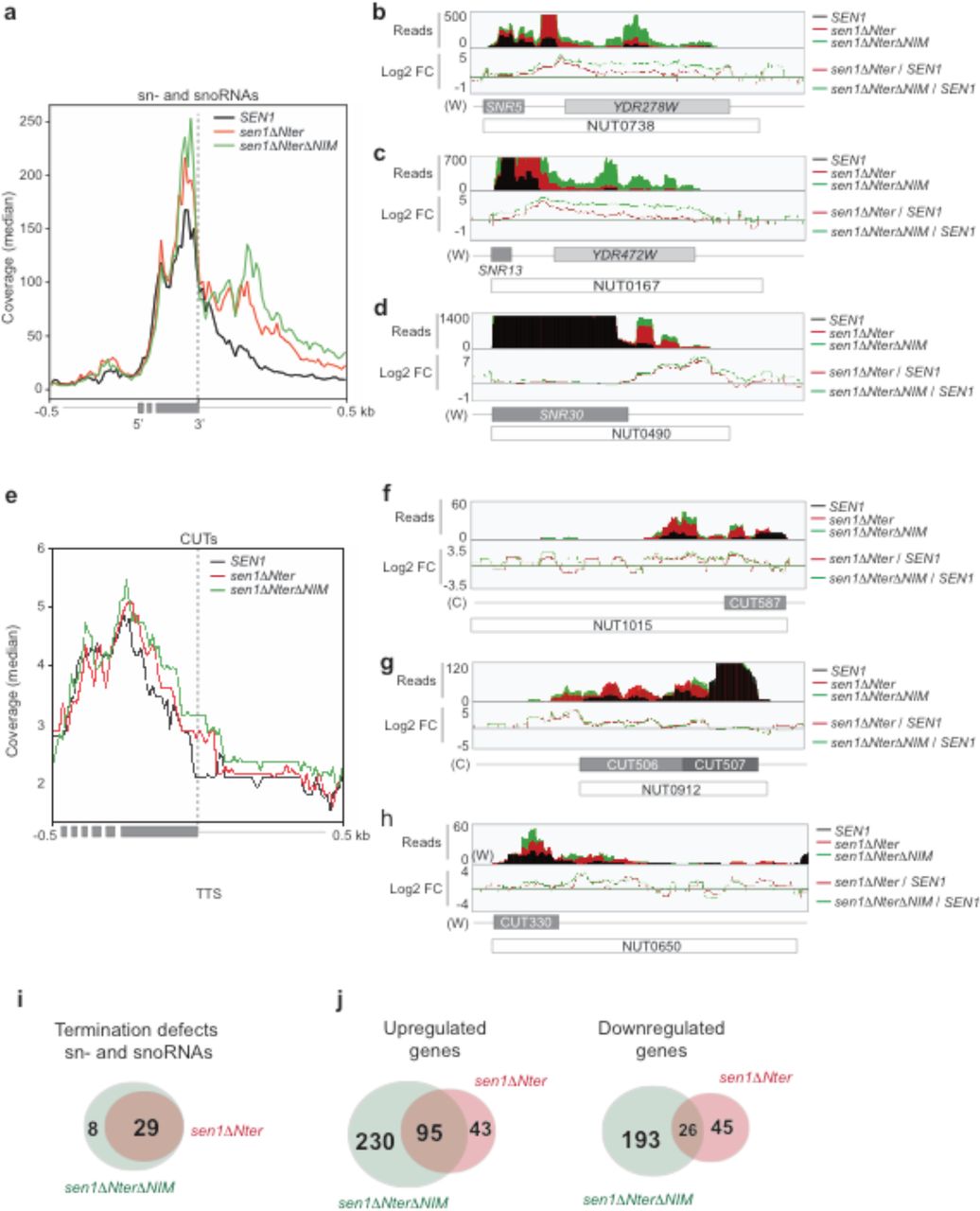 Article Title: Termination of non-coding transcription in yeast relies on both a CTD-interaction domain and a CTD-mimic in Sen1

Figure Lengend Snippet: The N-terminal domain of Sen1 can recognize the S5-phosphorylated form of RNAPII CTD and Sen1 C-terminal domain. A) Deletion of Sen1 N-terminal domain does not prevent the interaction of Sen1 with RNAPII. CoIP experiments using Rbp3-FLAG as the bait. Assays were performed in a Sen1-AID strain harboring a plasmid expressing either SEN1 or sen1ΔNter upon depletion of Sen1-AID in the presence of IAA for 2h. An asterisk denotes a major proteolytic Sen1 fragment detected in the extracts of roughly the size of sen1ΔNter. Nrd1 is detected as a positive control. Representative gel of one out of two independent experiments. B ) Deletion of the Sen1 N-terminal domain reduces the interaction of Sen1 with the S5P-CTD. CoIP experiments using TAP-Sen1 as the bait. Sen1 proteins were expressed from pGAL in the presence of galactose. Nab3 is detected as a positive control. Representative gel of one out of three independent experiments. In both A ) and B ) protein extracts were treated with RNaseA before immunoprecipitation. C ) Replacing the Nter of Sen1 by the CID of Nrd1 restores viability. Growth test performed in the same conditions as in figure 3A but in the presence of a TRP1 -plasmid carrying the SEN1 versions indicated in the scheme on the left. The growth of the strain expressing the Nrd1 CID-sen1 Δ Nter chimera in 5-FOA implies that this gene can support viability. D ) Substituting the Nter of Sen1 by Nrd1 CID but not Pcf11 CID partially suppresses the termination defects detected in the sen1ΔNter mutant. Northern blot assays performed in a Sen1-AID strain carrying an empty vector or a plasmid expressing the indicated versions of SEN1 upon depletion of the endogenous Sen1 protein as in figure 3B . Experiments performed in a Δrrp6 background. Representative gel of one out of two independent experiments.The U4 RNA is used as a loading control. Probes used for RNA detection are described in table S14. E ) Sen1 Nter interacts with the C-terminal domain (Cter) of Sen1 both in the presence and in the absence of the NIM in vitro . Pull-down experiments using either a wt or a Δ NIM version of recombinant Sen1 Cter immobilized on glutathione-sepharose beads and a TAP-tagged version of Sen1 Nter expressed in yeast. Representative gel of one out of three independent experiments. Antibodies used for protein detection are listed in table S11.