Figure Lengend Snippet: Assessment of required sequencing depth, technical and biological variation, dynamic range and reproducibility of single cell RNA-seq data of 80 single distal lung epithelial cells at E18.5 (a) Saturation analysis reveals the sequencing depth required for the detection of most genes expressed by single cells. To detect most expressed genes, single cell RNA-seq libraries have to be sequenced only to a depth of about 1 million reads, whereas libraries of bulk samples have to be sequenced deeper. The number of genes detected in the ensemble of all single cells (synthetic bulk) is comparable to the number of genes detected in the true bulk experiment. Each point on the saturation curve was generated by randomly selecting a number of raw reads from each sample library (bulk: 200 cell bulk library, single cell: single cell RNA-seq libraries of 80 lung epithelial cells, single cell ensemble: bioinformatically pooled single cell libraries) and then using the same alignment pipeline to call genes with mean FPKM > 1. Each point represents four replicate sub-samplings, error bars represent standard errors. (b) Technical noise and biological variation in single cell RNA-seq data. Relationship between mean expression level and coefficient of variation for 10,946 genes in single embryonic lung epithelial cells. Several genes exhibit strong biological variation (blue), as they exhibit higher variability than the average noise at a given average gene expression. Housekeeping genes are shown in yellow. (c) Average detected transcript levels (mean FPKM, log 2 ) for 92 ERCC RNA spike-ins as a function of provided number of molecules per lysis reaction for each of the three independent single cell RNA-seq experiments performed at E18.5. Linear regression fits through data points are shown. The length of each ERCC RNA spike-in transcript is encoded in the size and color of the data points. No particular bias towards the detection of shorter versus longer transcripts is observed. The method shows single transcript sensitivity as well as a dynamic range of approximately 6 orders of magnitude, in agreement with a previous study evaluating microfluidic single cell RNA-seq 7 . (d,e) Correlation between (d) transcript levels of a 200-cell population and median transcript levels of single cells of the same pool of embryonic lungs, and (e) transcript levels of two single AT2 cells. r , Pearson correlation coefficients. (f,g) Correlation between (f) transcript levels of all genes detected in the single lung and the pooled lung experiment and between (g) transcript levels of all genes detected in the two independent experiments on pooled embryonic lungs. Pearson correlation coefficients r are given. Figure Lengend Snippet: Impact of normalization on differential expression analysis. ( a ) For SEQC dataset, difference between RNA-seq and qRT-PCR estimates of Sample A/Sample B log-fold-changes, i.e., bias in RNA-seq when viewing qRT-PCR as gold standard. All RUV versions lead to unbiased log-fold-change estimates; CL based on ERCC spike-ins leads to severe bias. ( b ) For SEQC dataset, receiver operating characteristic (ROC) curves using a set of 370 positive and 86 negative qRT-PCR controls as gold standard. RUVg (based on either empirical or spike-in controls) and UQ normalization perform slightly better than no normalization. UQ based on spike-ins performs similarly to no normalization and CL based on spike-ins performs the worst. ( c ) For Zebrafish dataset, distribution of edgeR p -values for tests of DE between treated and control samples. UQ and CL normalization based on spike-ins lead to distributions far from the expected uniform. ( d ) For Zebrafish dataset, heatmap of expression measures for the 61 genes found DE between control (Ctl) and treated (Trt) samples after UQ but not after RUVg normalization. Clustering of samples is driven by outlying Library 11. ( e ) Heatmap of expression measures for the 475 genes found DE after RUVg but not after UQ normalization. Samples cluster as expected by treatment. Figure Lengend Snippet: Properties of nanopore DRS sequencing data. ( A ) Nanopore DRS identified a 12.8 kb transcript generated from the AT1G67120 gene that includes 58 exons. Blue, nanopore DRS isoform; black, Araport11 annotation. ( B ) Synthetic ERCC RNA spike-in mixes are detected in a quantitative manner. Absolute concentrations of spike-ins are plotted against counts per million (CPM) reads in log 10 scale. Blue, ERCC RNA spike-in mix 1; orange, ERCC RNA spike-in mix 2. ( C ) Overview of the sequencing and alignment characteristics of nanopore DRS data for ERCC RNA spike-ins. Left, distribution of the length fraction of each sequenced read that aligns to the ERCC RNA spike-in reference; centre, distribution of fraction of identity that matches between the sequence of the read and the ERCC RNA spike-in reference for the aligned portion of each read; right, distributions of the occurrence of insertions (black), substitutions (orange) and deletions (blue) as a proportion of the number of aligned bases in each read. ( D ) Substitution preference for each nucleotide (left to right: adenine [A], uracil [U], guanine [G], cytosine [C]). When substituted, G is replaced with A in more than 63% of its substitutions, while C is replaced by U in 73%. Conversely, U is rarely replaced with G (12%) and A is rarely substituted with C (16%). ( E ) Nucleotide representation within the ERCC RNA Spike-In reference sequences (black dots) compared with nucleotide representation within four categories from the nanopore DRS reads. Identity matches between the sequence of the read and the ERCC RNA spike-in reference (green crosses), insertions (blue pentagons), deletions (yellow stars) and substitutions (purple diamonds).G is under-represented and U is over-represented for all three categories of error (insertion, deletion and substitution) relative to the reference nucleotide distribution. C is over-represented in deletions and substitutions. A is over-represented in insertions and deletions and under-represented in substitutions. ( F ) Signals originating from the RH3 transcripts are susceptible to systematic over-splitting around exons 7–9 (highlighted using a purple dashed box), resulting in reads with apparently novel 5′ or 3′ positions. This appears only to occur at high frequency in datasets collected after May 2018 ( Supplementary file 1 ) and may result from an update to the MinKNOW software. ( G ) PIN7 antisense RNAs detected using nanopore DRS. Blue, Col-0 PIN7 sense Illumina RNAseq coverage and nanopore PIN7 sense read alignments; orange, Col-0 PIN7 antisense Illumina RNAseq coverage and nanopore PIN7 antisense read alignments; green, hen2–two mutant PIN7 sense Illumina RNAseq coverage; purple, hen2–two mutant PIN7 antisense Illumina RNAseq coverage; black, PIN7 sense RNA isoforms found in Araport11 annotation; grey, PIN7 antisense differentially expressed regions detected with DERfinder. Figure Lengend Snippet: Triplication of a Down Syndrome Critical Region or HMGN1 Overexpression Alone Results in Increased RNA per Transcript per Cell (A) Log 2 fold change per transcript from RNA-sequencing of progenitor B cell colonies from Ts1Rhr compared to wild-type (top) and from HMGN1-OE transgenic versus wild-type (bottom) bone marrow. n = 3 biological replicates per genotype. Plots on the left are median read count normalized between samples (“Relative”), and plots on right are ERCC spike-in per cell-normalized (“Absolute”). Distribution compared to the null hypothesis of no difference between genotypes using single sample t test. (B) The data from (A) are plotted with each dot representing a single gene’s expression quantitated in the indicated genotypes. The dotted line represents the unity line of no difference between genotypes. The contour lines and legend represent high (green) to low (blue) relative bin density. Red and blue numbers represent the number of genes that increase or decrease, respectively, in Ts1Rhr or HMGN1 versus wild-type (fold-change > 1.5, p Article Title: EXOSC10 sculpts the transcriptome during the growth-to-maturation transition in mouse oocytes

Figure Lengend Snippet: Non-poly(A) transcripts are also affected in Exosc10 cKO oocytes detected by RiboMinus RNA-seq. ( A ) Total RNA abundance indicated by RNA reads normalized to ERCC reads. ( B ) Further normalization of A by the mean value of the GV stage within each genotype. ( C ) PCA of all libraries. Each dot represents one library, color-coded by genotype and stage. ( D ) MA-plot of transcript changes from GV to MII in control oocytes. The increased and decreased transcripts are labeled by red and blue, respectively (both have P -adjust Article Title: EXOSC10 sculpts the transcriptome during the growth-to-maturation transition in mouse oocytes

Figure Lengend Snippet: Exosc10 cKO oocytes exhibit dysregulated transcriptomes during oocyte maturation. ( A ) Schematic illustrating the pipeline of single oocyte RNA-seq. After individual oocyte lysis, oligo-dT beads captured poly(A) RNAs for library construction and sequencing. Genotypes were determined from genomic DNA. ( B ) Total RNA levels were normalized for each library by an ERCC RNA spike-in mix. ( C ) Further normalization of total RNA level in B by the mean value of the GV stage within each genotype. ( D ) Heatmap of all libraries, each row represents one gene and each column represents one library. Genes are ranked from highest to lowest expression level, and every 100th gene from the top half were selected to represent the transcriptome. The transcription level was color-coded from high to low. ( E ) PCA of the 64 libraries. Each dot represents one library, color-coded by genotype and stage. ( F ) Log 2 fold change of Exosc10 and Gapdh in cKO versus control oocytes. The bars and lines are log 2 fold change and standard error of the mean from DESeq2 analyses. **** P -adjust Figure Lengend Snippet: Design of the ribosomal depletion study: Schematic of the sample processing is shown. A single sample of UHR RNA with SIRV spike-ins was kept intact or heat degraded followed by addition of the ERCC spike-in. The two samples were then distributed to the participating sites where they were run as technical duplicates for each kit. All graphics were either produced by the authors or are public domain images that are no longer under copyright

Article Snippet: The sample was split into two aliquots, one of which was then heated at 94° C on an Eppendorf™Thermomixer for 1 h and 27 min. 1 μl of () was added to both the intact and degraded samples before running on a Bioanalyzer 2100 RNA Nano chip (Agilent) (Additional file : Figure S1). 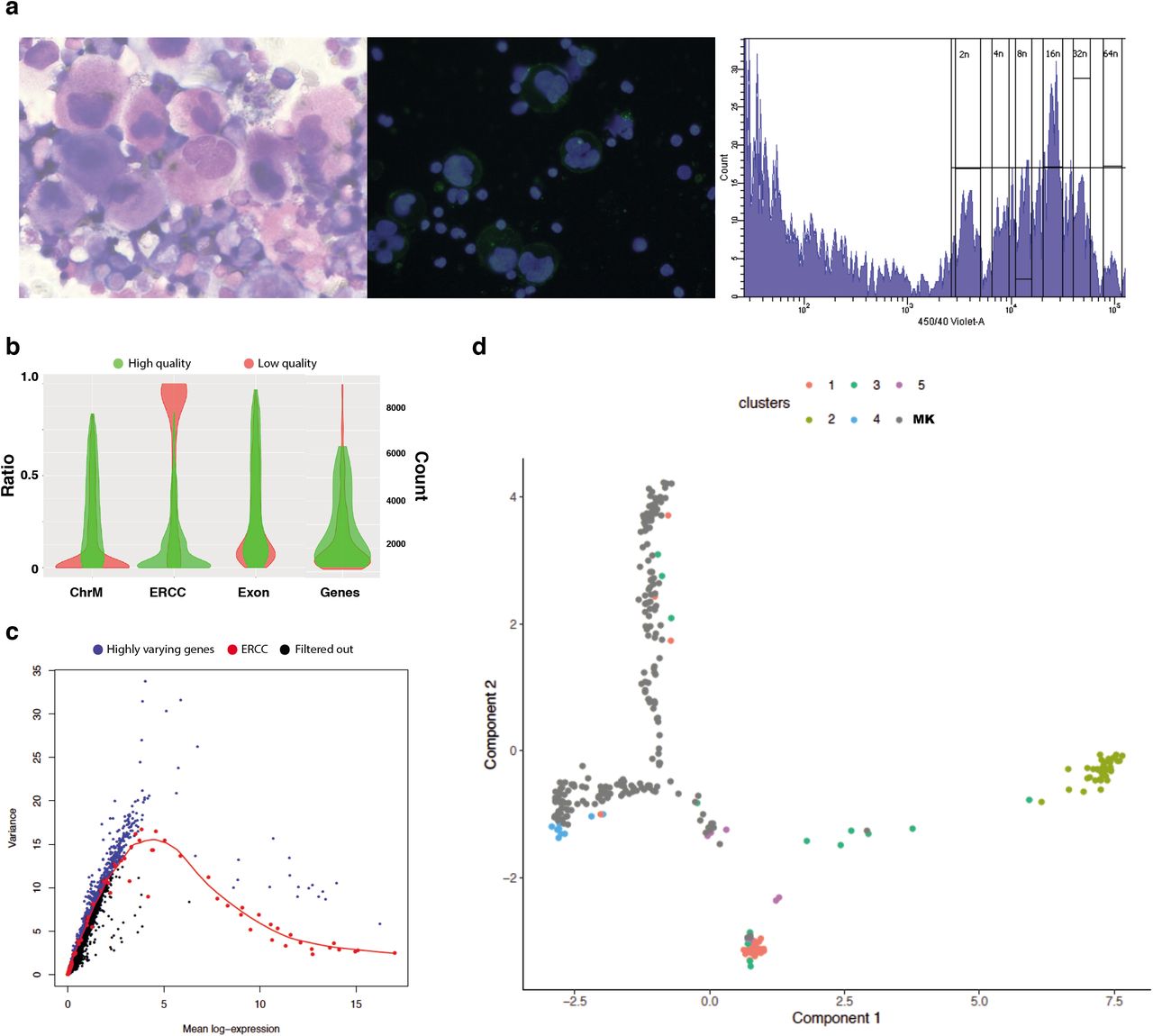 Figure Lengend Snippet: TempO-Seq assay sensitivity. (A) URR RNA was diluted in 10-fold steps with input of 100 ng down to 0.1 pg total RNA, plus no-input, in triplicate. Error bars indicate 1 standard deviation. Each color indicates a different gene, selected across the dynamic range. (B) MDA MB 231 cell lysates were diluted in 10-fold steps, for a range of 4,000 down to 0.004 cells in the assay. Genes were selected as for (A). (C) Mix 2 of the synthetic reference ERCC ExFold RNA Mixtures was diluted in 10-fold steps from 1x10 -3 down to 1x10 -6 of the supplied stock in URR as carrier, then assayed using a detector oligo pool specific for the ERCC RNAs. Average reads per sample ranged from 3.6K for the 1x10 -6 dilution to 340K for the 1x10 -3 dilution. Results from the 1 x 10 −5 dilution are shown. (D) MDA MB 231 cells were diluted in 10-fold increments into a constant background of MCF7 cells (blue bars), or MCF-7 cells were diluted into a constant background of MDA MB 231 cells (green bars), then lysed and assayed for cell-specific transcripts. Of the 13 and 14 genes monitored, respectively, the fraction that were significantly above background is shown for each cell dilution. Read depth ranged from 3.6M/sample for 100%, 299K for 0.1%, and down to 64K for 0.00001% for both titrations.

Figure Lengend Snippet: Cross-platform comparison of TempO-Seq and RNA-Seq. (A) Log2 fold changes between MCF-7 and MDA MB 231 RNAs as measured by TempO-Seq (~4 M reads/sample) are compared to those measured by RNA-Seq (~15 M reads/sample) for the 6,500 genes that had over 20 read counts in both cell types on each platform. R 2 = 0.91. (B) ERCC Mixes 1 and 2 were diluted 1:1,000 and spiked into 100 ng URR, then assayed with a dedicated DO pool. Fold differences in sequencing reads are compared to the fold differences in concentration between the two mixes. Read depth was 340K reads/sample.

Article Snippet: ERCC standards and Human Brain Reference RNA were purchased from Scientific (4456739 and AM6050, respectively).