Figure Lengend Snippet: Overview of Cufflinks. The algorithm takes as input cDNA fragment sequences that have been ( a ) aligned to the genome by software capable of producing spliced alignments, such as TopHat. With paired-end RNA-Seq, Cufflinks treats each pair of fragment reads as a single alignment. The algorithm assembles overlapping ‘bundles’ of fragment alignments ( b-c ) separately, which reduces running time and memory use because each bundle typically contains the fragments from no more than a few genes. Cufflinks then estimates the abundances of the assembled transcripts ( d-e ). ( b ) The first step in fragment assembly is to identify pairs of ‘incompatible’ fragments that must have originated from distinct spliced mRNA isoforms. Fragments are connected in an ‘overlap graph’ when they are compatible and their alignments overlap in the genome. Each fragment has one node in the graph, and an edge, directed from left to right along the genome, is placed between each pair of compatible fragments. In this example, the yellow, blue, and red fragments must have originated from separate isoforms, but any other fragment could have come from the same transcript as one of these three. ( c ) Assembling isoforms from the overlap graph. Paths through the graph correspond to sets of mutually compatible fragments that could be merged into complete isoforms. The overlap graph here can be minimally ‘covered’ by three paths, each representing a different isoform. Dilworth's Theorem states that the number of mutually incompatible reads is the same as the minimum number of transcripts needed to “explain” all the fragments. Cufflinks implements a proof of Dilworth's Theorem that produces a minimal set of paths that cover all the fragments in the overlap graph by finding the largest set of reads with the property that no two could have originated from the same isoform. ( d ) Estimating transcript abundance. Fragments are matched (denoted here using color) to the transcripts from which they could have originated. The violet fragment could have originated from the blue or red isoform. Gray fragments could have come from any of the three shown. Cufflinks estimates transcript abundances using a statistical model in which the probability of observing each fragment is a linear function of the abundances of the transcripts from which it could have originated. Because only the ends of each fragment are sequenced, the length of each may be unknown. Assigning a fragment to different isoforms often implies a different length for it. Cufflinks can incorporate the distribution of fragment lengths to help assign fragments to isoforms. For example, the violet fragment would be much longer, and very improbable according to Cufflinks' model, if it were to come from the red isoform instead of the blue isoform. ( e ) The program then numerically maximizes a function that assigns a likelihood to all possible sets of relative abundances of the yellow, red and blue isoforms (γ 1 ,γ 2 ,γ 3 ), producing the abundances that best explain the observed fragments, shown as a pie chart. Figure Lengend Snippet: Upregulation of expression of the Grg2 (RDA1) and Grg6 (RDA3) genes induced by E2A-HLF. (A) Northern blot analysis of poly(A) + RNA (1 μg per lane) prepared from FL5.12 cells stably transfected with the pMT empty vector (lanes 1 to 4) or with metallothionein promoter-regulated constructs containing cDNAs for E2A-HLF (lanes 5 to 8), the ΔAD1 E2A-HLF mutant lacking the AD1 transactivation domain of E2A (lanes 9 and 10), the BX E2A-HLF mutant with a disabled HLF DNA-binding domain (lanes 11 and 12), E2A (E12 [lanes 13 and 14] and E47 [lanes 15 and 16]), HLF (lanes 17 and 18), or TEF (lanes 19 and 20). Cells were cultured in IL-3-containing medium with (+) or without (−) 100 μM ZnSO 4 for 18 h to induce expression of the transfected cDNA and then continued in the same concentration of zinc and either maintained in IL-3 (+) or deprived of the cytokine (−) for an additional 12 h before RNA extraction. The blot was hybridized with the Grg2 (RDA1), Grg6 (RDA3), or GAPDH cDNA probe as indicated. The mobilities of the 18S and 28S rRNAs are shown. (B) Immunoblot analysis of FL5.12 cells transfected with E2A-HLF, E12, E47, HLF, or TEF protein. To verify that expression of the indicated genes was upregulated by zinc addition, lysates were prepared from FL5.12 cells and analyzed by immunoblotting with E2A rabbit antisera (αE2A) (top) and HLF(C) rabbit antisera (αHLF) (bottom). Cells were stably transfected with the pMT empty vector (pMT-CB6+) or with metallothionein promoter-regulated constructs containing cDNAs for E2A-HLF, E2A (E12 and E47), HLF, or TEF, with or without the addition of zinc as described for panel A.

Article Snippet: Double-stranded cDNAs were synthesized with the () according to the manufacturer's protocol. Figure Lengend Snippet: Agarose gel electrophoresis of RDA products from RNA extracted from bovine parainfluenza virus 3-infected cells. Double-stranded cDNA was synthesized from RNA of bovine parainfluenza virus 3-infected MDBK cells and subjected to RDA. Mock-infected cells were used for the synthesis of driver amplicons for RDA. One-twentieth of the volume of the amplified products was separated on 3% agarose gel and stained with ethidium bromide. RDA product from the uninfected control cells was used as a negative control. Figure Lengend Snippet: Autoradiogram of 32 P-labelled double-stranded cDNA synthesized from mixtures consisting of artificial RNA and total cellular RNA. In vitro transcribed RNA was synthesized from pCIneo plasmid and mixed with total cellular RNA extracted from rat2 cells in weight proportions 1:0 (lanes 1 and 8), 1:1 (lanes 2 and 9), 1:10 (lanes 3 and 10), 1:100 (lanes 4 and 11), 1:300 (lanes 5 and 12), 1:1000 (lanes 6 and 13) and 0:1 (lanes 7 and 14). One microgram of mixed RNA was reverse transcribed using random (lanes 1–7) or non-ribosomal (lanes 8–14) hexanucleotides and a second-strand cDNA was then synthesized with RNaseH, DNA polymerase and DNA ligase according to the method described in Materials and Methods. One-tenth of the volume of synthesized cDNAs was loaded on agarose gel ( A ). Loaded volumes were corrected to include the same amounts of 32 P in each sample ( B ). Positions and sizes (bp) of markers are present on the left. Article Title: Generation of superoxide anion in chloroplasts of Arabidopsis thaliana during active photosynthesis: a focus on rapidly induced genes

Figure Lengend Snippet: Analysis of MV up-regulated genes by Northern blot hybridization. Twenty micrograms of total RNA from control and MV-treated seedlings harvested at the indicated times after the onset of MV treatment were fractionated on formaldehyde–agarose gels and transferred to nylon membranes. Membranes were hybridized with 32 P-labelled cDNA fragments of the indicated genes and their MIPS identifiers are indicated Figure Lengend Snippet: Bioenergetics analysis of macrophages challenged with S. aureus Mouse BMDM (5 × 10 4 ) were plated in XF 96 V3-PS cell culture plates and treated with AICAR (1mM) one hour before challenge with S. aureus (MOI 10:1) (A) and HKSA (10 8 cfu) (B) for 8h. The extracellular acidification rate (ECAR) was measured by the sequential addition of glucose, oligomycin and 2DG. In a separate experiment, macrophages were plated in 6 well plate (5× 10 6 cells/well) and treated with AICAR (1mM) one hour before S. aureus infection for 8h. Cells were collected, RNA was extracted, cDNA was synthesized, and qRT PCR was performed for the glycolytic pathway genes HK2 and Glut1 and fold change was calculated using GAPDH ( C ). Each data point represents mean ± SD (n = 6/condition/experiment), and results are representative of at least 3 independent experiments. Statistical analysis was performed using one-way ANOVA with Bonferroni’s multiple-comparison test. * P Figure Lengend Snippet: S. aureus -infected microglia and retinal tissue showed increased glycolysis and AICAR treatment inhibited this response BV2 cells (3 × 10 4 cells/well) were plated in XF 96 V3-PS 96 cell culture plates (Seahorse Bioscience) and treated with AICAR (1mM) one hour before challenged with live S. aureus (MOI 10:1) (A) or HKSA (10 8 cfu) for 8h (B). The extracellular acidification rate (ECAR) was measured by the sequential addition of glucose, oligomycin and 2 deoxyglucose (2-DG). To examine the contribution of bacteria alone in the total response of the cells, live S. aureus was added in media only. In the another experiment, BV2 mouse microglia cells were plated in 6 well plate (1× 10 6 cells/well) and treated with AICAR (1mM) one hour before S. aureus infection for 8h. Cells were collected, RNA was extracted, cDNA was synthesized, and qRT-PCR was performed for glycolytic pathway genes HK2 and Glut1 and fold changes were calculated using housekeeping gene GAPDH ( C ). Eyes of WT (C57BL/6) (n = 5) were infected with S. aureus (5000 cfu/eye) followed by AICAR treatment (30 μg/eye) for 24h. Retinas were removed and pooled for RNA extraction. cDNA was prepared, and qPCR was performed for the glycolytic pathway genes HK2 and Glut1 and fold change was calculated using GAPDH (D) . Each data point represents mean ± SD (n = 6/condition/experiment), and results are representative of at least 3 independent experiments. The results represent the mean ± SD of triplicates from three independent experiments. Statistical analysis was performed using one-way ANOVA with Bonferroni’s multiple-comparison test. * P Article Snippet: For the Ribo-Zero libraries, we synthesized and prepared an indexed library as described for the RNase H libraries. 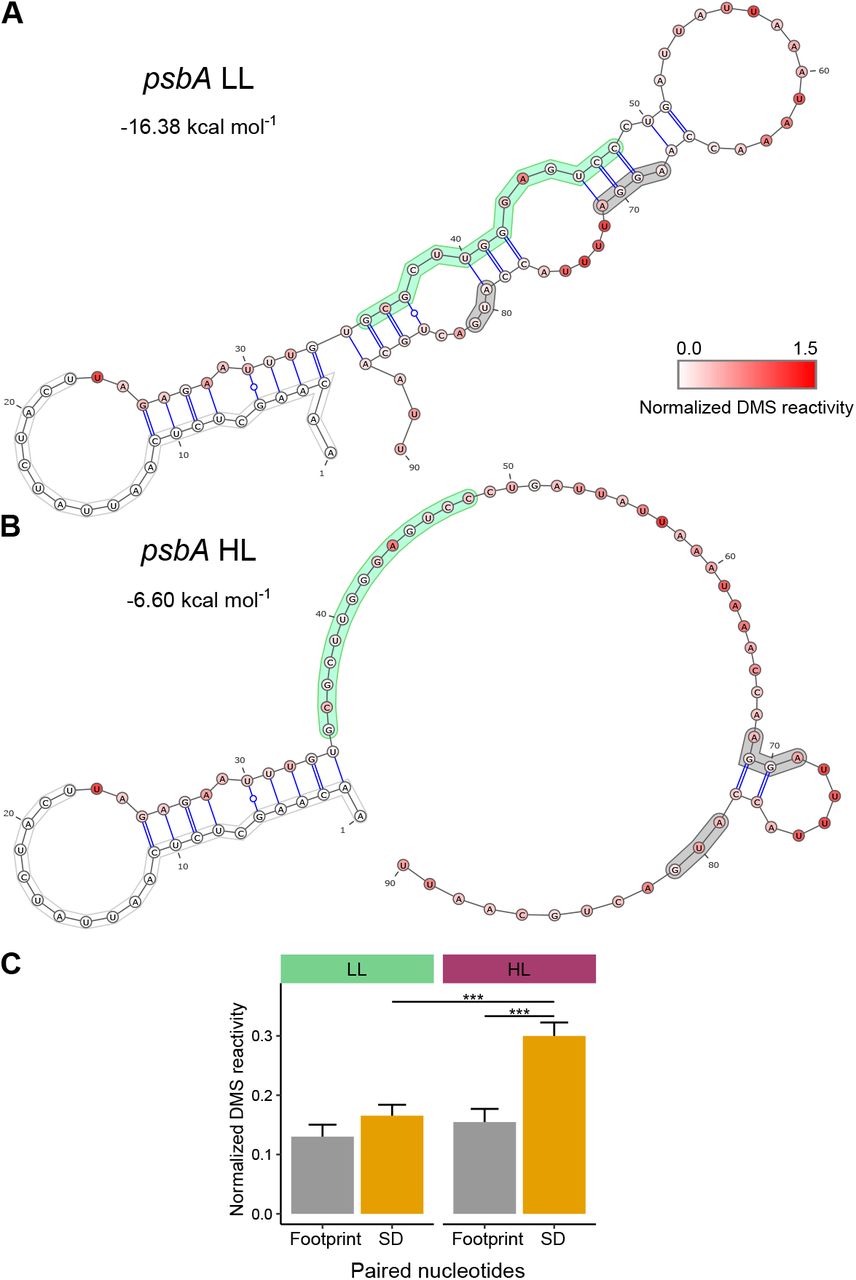 Figure Lengend Snippet: Footprint of a putative regulatory protein bound to the 5’ UTR of psbA : A , Predicted mRNA secondary structure of the psbA translation initiation region in low light (LL) using normalized DMS reactivities ( Figure 1A ) as constrains. The white box marks the position of the primer used to amplify the cDNA. For this region no DMS reactivities could be obtained. The green box marks the footprint of a RNA binding protein ( McDermott et al., 2019 ) (Supplemental Figure S11A-D), the grey boxes indicate the Shine-Dalgarno sequence (AGGA) and the start codon (AUG). For each nucleotide, the normalized DMS reactivity is shown in a color code. The kcal mol −1 value for the strength of the RNA structure is given. B , Predicted mRNA secondary structure in high light (HL) using normalized DMS reactivities ( Figure 1A ) and the protein binding site (forced to be single-stranded) as constrains. For the structure predictions for in vitro -folded RNA see Supplemental Figure S11G. C , Normalized DMS reactivities of the nucleotides predicted to form base pairs in low light ( A ) between the region of the footprint (between nucleotides 35-48) and the region including the start codon and the Shine-Dalgarno sequence (SD) (between nucleotides 69-86). The average normalized DMS reactivities are shown separately for both regions. Nucleotides in these regions predicted not to be paired are excluded. DMS reactivities at the SD side significantly increase in high light indicating a shift to single-stranded RNA. This suggests that in low light a stem loop structure is formed ( A ), whereas in high light a protein is bound to the psbA translation initiation region making the SD and the start codon accessible ( B ). Asterisks indicate statistically significant changes compared to LL ( P -values calculated with the Wilcoxon rank sum test; *** = P

Article Snippet: RNA was recovered by ethanol precipitation. , library preparation and sequencing was done as described above. Article Snippet: was obtained from RNA extracted from reference breast epithelial cells () or from BT-474 cells using the Strategene kit.

Article Title: Tissue-Specific Transcriptome and Hormonal Regulation of Pollinated and Parthenocarpic Fig (Ficus carica L.) Fruit Suggest that Fruit Ripening Is Coordinated by the Reproductive Part of the Syconium