Figure Lengend Snippet: Assessment of 5-hmC labeling efficiency. Lambda DNA was nicked with Nt.BspQI (nine expected labeling spots) and labeled with either 5-hmC or fluorescent dUTP. 5-hmC was labeled according to our labeling scheme, and the samples were mixed and imaged together in order to evaluate the labeling efficiency. (A) Representative field of view showing a mixed population of green (nicking) and red (5-hmC) labeled molecules. (B) Histograms showing the number of labels per molecule for 5-hmC labeling (top) and nicking (bottom). Figure Lengend Snippet: DNA extension versus time of λ-DNA treated with Pt(R,R-DACH) or Pt(S,S-DACH). Each data curve was the average of at least three independent measurements. Figure Lengend Snippet: Components of the Platform ACE System. ( A ) Platform ACE is a murine artificial chromosome pre-engineered to contain multiple recombination acceptor att P sites. ( B ) ACE Integrase is based on the enzyme lambda integrase, which has been modified as described in the text. The modification renders the integrase functionally independent of bacterial host cell factors and capable of operating in a mammalian context. In the Platform ACE system, an ACE Integrase expression vector is co-transfected with a targeting vector (see below) into a cell line harboring the Platform ACE. The transiently expressed ACE Integrase then catalyses the integration of the targeting vector onto the Platform ACE. ( C ) The ATV is a plasmid-based shuttle vector that conveys a gene(s) of interest onto the Platform ACE by means of targeted recombination between the recombination acceptor att P sites present on the Platform ACE and the recombination donor att B site of the ATV, catalyzed by the ACE Integrase. The presence of a promoterless antibiotic resistance gene downstream of the att B donor site allows for selection of targeted integration events. ( D ) A representation of a ‘loaded’ recombination acceptor site on the Platform ACE. Note that the targeted integration of the targeting vector has resulted in the activation of the promoterless antibiotic resistance gene by virtue of its in frame insertion downstream of the SV40 promoter present in the ACE acceptor site. ( E ) Southern-blot analysis of Platform ACE. Genomic DNA was hybridized with a labeled probe encoding the SV40 promoter and att P site. Lanes 1–3: copy number controls: 50 copies (lane 1), 100 copies (lane 2), 250 copies (lane 3); LMTK − negative control (without ACE, Lane 4) and CHR1 cell line (containing Platform ACE, Lane 5). See Materials and Methods for details. Article Snippet: A Hin dIII digest of () was prepared in a similar manner with the exception that it was heated to 60°C. Figure Lengend Snippet: Photon count, length, speed, and size. Analysis of a sample containing a mixture of λ -bacteriophage DNA and its Hin dIII digest. In 2 min, 16,315 molecules were detected with an average speed ( A ) Distribution of the real length The peaks are shown fitted to nine modified Gaussians ( red ). ( B ) Real length versus number of basepairs. ( C ) Photon count (cnts) per molecule versus the number of basepairs. A linear fit yields a slope of ( D ) Distribution of photon counts cnts per molecule versus real length ( E ) Distribution of the photon counts per molecule. The peaks are fitted to eight modified Gaussians ( red ). The peaks in A and E are interpreted as the following DNA strand sizes, in number of basepairs: 125, 564, (2027 + 2322)/2, 4361, 6557, 9416, 23,130, 23,130 + 4361, 48,502. Whereas peaks 7 and 8 are resolved separately in A , they are combined in E . The values plotted in B and C are the mean values resulting from the Gaussian fits from A and E , respectively. ( F ) Distribution of molecule speed versus real length DNA speed is essentially constant with length, showing only a slight decrease for the shortest fragment.

Article Snippet: A Hin dIII digest of () was prepared in a similar manner with the exception that it was heated to 60°C. 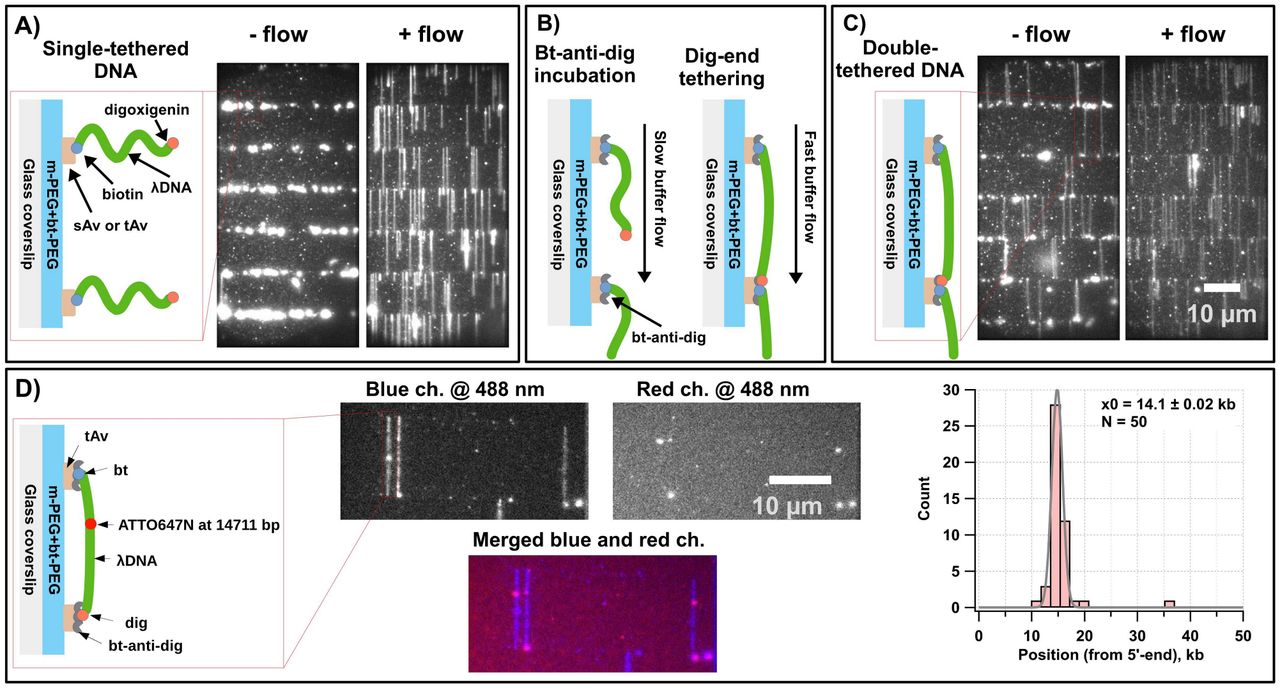 Figure Lengend Snippet: Double-tethered Soft DNA Curtains with defined orientation. A) Cartoon illustrates the printed traptavidin (tAv) line-features that enable specific one-end immobilization of the biotin-λ DNA-digoxigenin (bt-λ DNA-dig, 48.5 kb) molecules. TIRF images shows that in the absence of the buffer flow (-flow), DNA molecules are aligned to the line-features. They are responding to a hydrodynamic force (+flow) by extending parallel to the surface. B) To tether the dig-labeled end of bt-λ DNA-dig, continuous slow flow of buffer containing biotinylated anti-dig (bt-anti-dig) antibody is applied and DNA molecules are dragged slightly, but do not reach the neighboring line-feature. At the next step, buffer flow rate is increased and the dig-labeled DNA ends encounter the neighboring line-feature, which is now covered with the bt-anti-dig, and the dig-labeled ends become anchored through dig – anti-dig interaction. C) Cartoon illustrates the doubletethered bt-λ DNA-dig molecule after dig-labeled end tethering. TIRF images shows that those DNA molecules that remain stretched without buffer flow (-flow) were successfully both-end tethered. D) Cartoon illustrates the DNA immobilization strategy and internal ATTO647N tag, which was located at 14711 bp from the biotinylated DNA end. TIRF images shows SG stained DNA molecules in the absence of buffer flow. Excitation wavelength and emission channel is indicated above each image. Histogram showing the distribution of ATTO647N locations that were determined by fitting the images to 2D Gaussian functions. Si master #8. 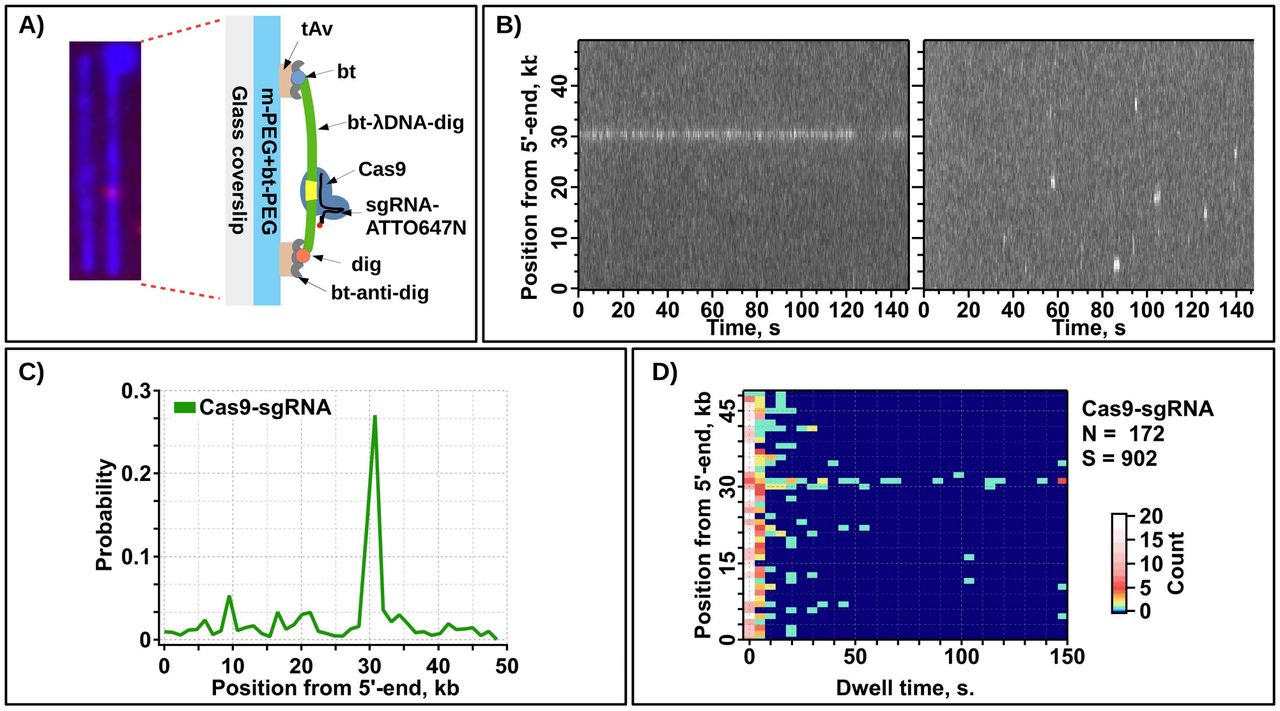 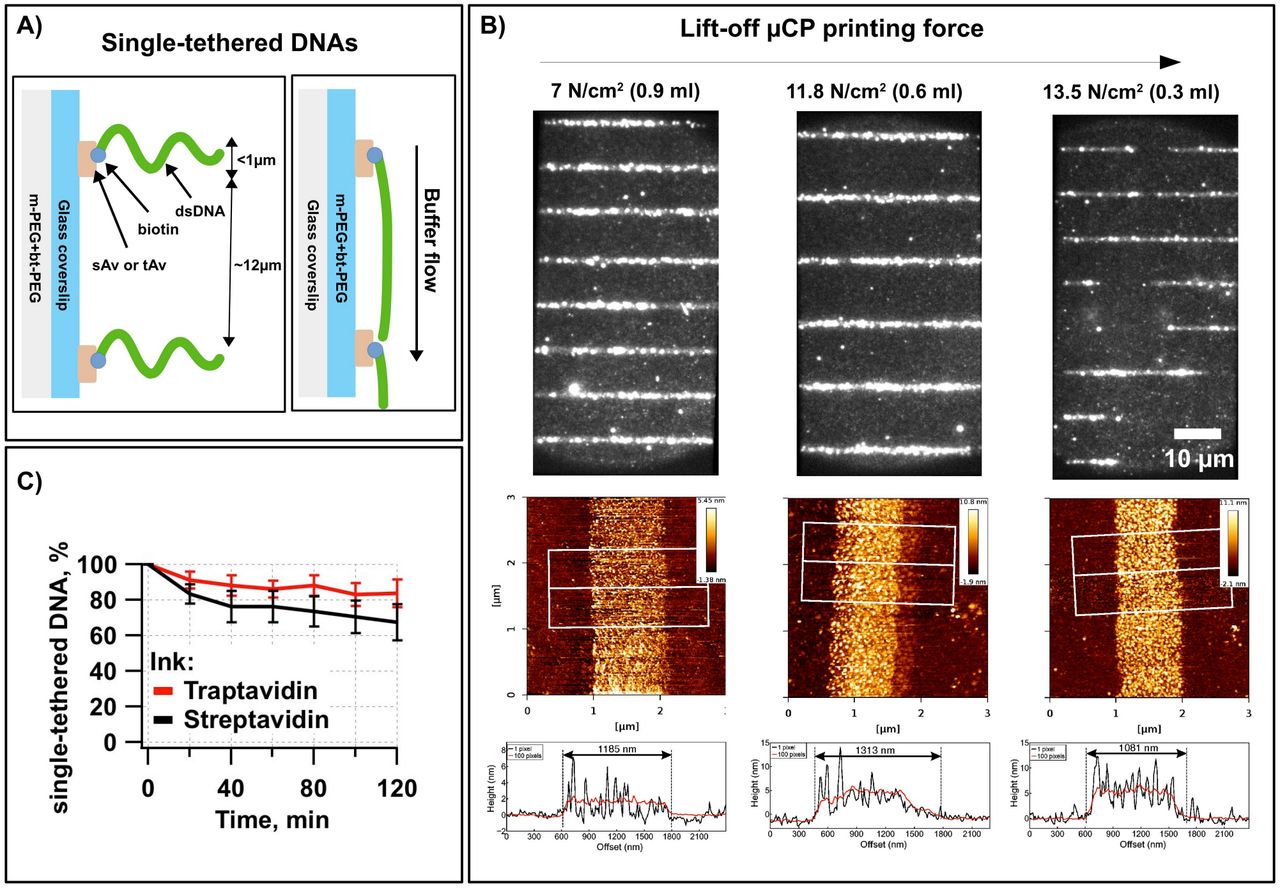 Figure Lengend Snippet: Optimization of DNA arrays fabrication. A) Schematic of the single-tethered Soft DNA Curtains design shows PEG monolayer on a glass coverslip and printed streptavidin (sAv) or traptavidin (tAv) line features, which enables specific one-end immobilization of the biotinylated λ DNA (48.5 kb) molecules. DNA molecules are tethered to the line features and responds to a hydrodynamic force by extending parallel to the surface. B) Effect of printing pressure (PP) on the quality of short DNA molecule arrays. Top panel shows TIRF images of 5 kb long biotinylated DNA molecules stained with SYTOX green (SG), which were immobilized on the sAv line-features fabricated on modified coverslip. PP is indicated above each image. Bottom panel shows AFM images and their line-profiles (1 and 100 pixels) of the sAv line features fabricated on the modified glass coverslip at the same pressure as the TIRF images. [sAv] = 0.02 mg/mL, Si master #1. C) Stability test of single-tethered Soft DNA Curtains – λ DNA molecules immobilized on a sAv (or tAv) array template and stained with SG. Images were acquired every 20 min for a period of 2 h. In between acquisitions, there was no buffer flow applied. During the acquisition, 20 frames were acquired at buffer flow of 1 mL/min and 20 frames without the flow. Graph shows the average number of single-tethered DNA molecules that extended to the full length. Average was taken over line-features and the error bars represents SD. Si master #3. Figure Lengend Snippet: Types of data output provided by the custom analysis software of the real-time digital nucleic acid amplification instrument after a multivolume PCR reaction using lambda DNA on a multivolume SlipChip device with a 15 s exposure time. Each graph (B–D) was exported as line art and scaled. (A) An image depicting the mask created to define the locations of each compartmentalized reaction on a multivolume microfluidic device. (B) Baseline-corrected amplification traces from each of the reaction wells on the microfluidic device. Two intensity groups result because in this multivolume microfluidic device there are two well depths (the two larger volumes are 100 μm deep and the two smaller volumes are 50 μm deep) [ 20 ]. The arrow shows the correlation of a single compartmentalized reaction (A) to its real-time trace (B). (C) A graph depicting the number of positive reactions as a function of amplification cycle from the data generated in (B). (D) A graph depicting the negative derivative of the collected melt curve traces from each of the positive reactions. (E) A screenshot of the analysis software analyzing the real-time data shown in panel (B). Figure Lengend Snippet: Radioactive signal for increasing amounts of DNA added to 10 ng of radiolabeled RNA and for DNA alone. The signal is expressed as the SAB.

Article Snippet: To evaluate the effect of the presence of DNA in RNA extracts on membrane hybridizations, RNA was removed from (catalog no. D-2001; , St. Louis, Mo.) by RNase digestion (Ribonuclease 1 A; Pharmacia).

Article Snippet: To evaluate the effect of the presence of DNA in RNA extracts on membrane hybridizations, RNA was removed from (catalog no. D-2001; , St. Louis, Mo.) by RNase digestion (Ribonuclease 1 A; Pharmacia).