Figure Lengend Snippet: Differential gene expression (DE) for the interaction of Genotype and Treatment [(MUT_MA – MUT_SAL) – (WT_MA – WT_SAL)] was performed using limma and edgeR . Differential exon and intron usage analysis (alternatively spliced; AS) for interaction of Genotype and Treatment [(MUT_MA – MUT_SAL) – (WT_MA – WT_SAL)] was performed using Aspli . (A): Venn diagram comparing RNA-binding targets of hnRNP H with differential gene expression and differential exon or intron usage. The 19 DE genes and 469 AS genes were then compared with the hnRNP H targets that comprised the Genotype x Treatment interactions. Cacna2d2 is the only RNA-binding target of hnRNP H that was both a DE gene and an AS gene. Only the top overlapping and non-overlapping hnRNP H targets and AS genes are indicated. Out of the 19 DE genes, Cacna2d2, Elfn1 , Calb2 , and Zic1 are putative targets of Malat1 (predicted by TargetScan; ) while Camta1 and Pcdh8 are putative targets of Mir124a (predicted by LncRRIsearch; ). (B): Volcano plot of genes showing a Genotype x Treatment interaction in response to methamphetamine. The interaction is expressed as (MUT_MA – MUT_SAL) – (WT_MA – WT_SAL). Cacna2d2 is circled in red. The five overlapping hnRNP H targets and DE genes are circled in purple. (C): hnRNP H preferentially binds to the 3’UTR of Cacna2d2 . Visualization of reads by Integrative Genome Browser for the hnRNP CLIP peak at the 3’UTR of Cacna2d2 . Scale of the plot height is in counts per million (CPM). (D): A G-rich motif was detected at the hnRNP H CLIP peak within the 3’UTR of Cacna2d2 . De novo motif discovery of the binding site was performed in MEME . (E): Interaction plots showing hnRNP H binding to the 3’UTR of Cacna2d2 (left), differential usage of the 3’UTR (middle), and differential gene expression of Cacna2d2 (right) as a function of Genotype and Treatment. The increase in hnRNP H binding to the 3’UTR of Cacna2d2 was associated with decreased 3’UTR usage and increased gene expression of Cacna2d2 in Hnrnph1 mutants. Here, 3’UTR usage is defined as to the number of normalized reads mapped to the 3’UTR portion of Cacna2d2 . The interaction plots were generated from CLIP-seq and RNA-seq data showing average values with standard deviation of the means, with n = 3 per condition. 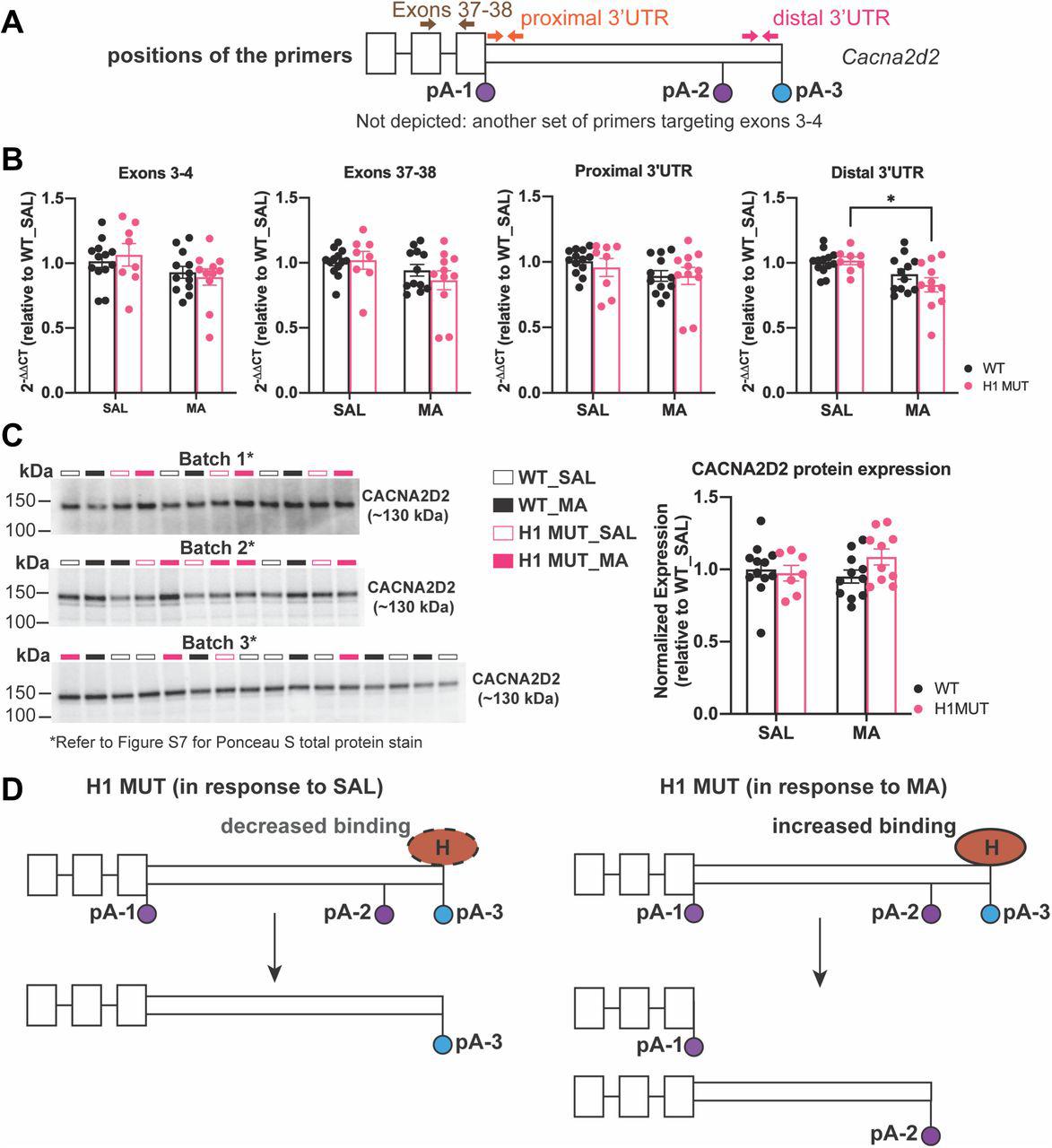 Figure Lengend Snippet: CLIP-seq analysis identified an increase in hnRNP H binding to the distal end of 3’UTR of Cacna2d2 in Hnrnph1 mutants that was associated with decreased usage of the 3’UTR, warranting further validation. (A): Three polyadenylation sites (pA-1, pA-2, and pA-3) are present within the 3’UTR of Cacna2d2 that distinguish isoforms containing 3’UTR of different lengths (UCSC genome browser). Primers were designed to detect difference in usage of the proximal and distal end of the 3’UTR of Cacna2d2 as well as exons 37-38 and exons 3-4. The schematic indicates the positions of these primers. SAL = saline; MA = methamphetamine; WT = wild-types; H1 MUT = Hnrnph1 mutants. (B): The left striata were harvested from mice in the same way as in CLIP-seq followed by RNA extraction, cDNA library generation with oligo-DT primers, and RT-qPCR to detect differential usage of the regions at the 3’UTR of Cacna2d2 and upstream of it. No differences were found at exons 3-4 [F(1,39) Genotype x Treatment = 0.650, p = 0.425], exons 37-38 [F(1,39) Genotype x Treatment = 0.900, p = 0.349], or at the proximal end of the 3’UTR [F(1,39) Genotype x Treatment = 0.198, p = 0.659]. Although no significant Genotype x Treatment interaction was detected for the usage of the distal end of the 3’UTR [F(1,39) Genotype x Treatment = 1.485, p = 0.230], there was a significant main effect of Treatment [F(1,39) Treatment = 10.772, p = 0.002]. In examining the effect of Treatment at each level of Genotype, a significant, simple main effect of Treatment was found in the Hnrnph1 mutants [F(1,40) Treatment = 9.368, p = 0.004] but not in the wild-types [F(1,40) Treatment = 2.993, p = 0.091]. Subsequent analysis revealed decreased methamphetamine-induced usage of the distal end of 3’UTR in Hnrnph1 mutants compared to wild-types [t(40) = −3.061, *p = 0.004], with no significant genotypic difference between saline groups [t(40) = −1.730, p = 0.091]. The normalized 2 −ΔΔCT values from three independent replicates are shown in the plots. (C): The right striata of the same mice from the RT-qPCR analysis were collected for Western blot analysis to assess differences in CACNA2D2 protein expression. Immunoblots from three separate replicates are shown on the left with quantification shown on the right. There was no significant genotypic difference in the level of CACNA2D2 protein in saline or methamphetamine treatment groups [F(1,40) Genotype x Treatment = 2.587, p = 0.117]. (D): Schematics showing the putative interaction between hnRNP H-mediated selection of polyadenylation site in Cacna2d2. We proposed that binding of hnRNP H to the pA-3 site within the 3’UTR of Cacna2d2 blocks the usage of pA-3 to produce transcripts with a shorter 3’UTR in Hnrnph1 mutants in response to methamphetamine, (shown on right). This observation was identified in alternative splicing analysis ( , middle panel) and subsequently validated in the RT-qPCR ( , rightmost panel).