Figure Legend Snippet: Electron microscopy of RecA filaments in the presence of UvrD. ( A ) An ATPase reaction from which samples were taken at the early RecA stage, during the lag and after the later UvrD stage was achieved. Samples were taken at ∼10 min, 22 min and 35 min, times that correspond to the various stages. Reaction conditions were identical to those utilized in the reaction of Figure 2 , except that 40 nM UvrD helicase was utilized. The RecA stage (10 min), lag (22 min) and UvrD stage (35 min) of the UvrD-mediated displacement reaction are illustrated in panels B , C and D , respectively. A field showing SSB–ssDNA complexes by themselves can be found in Supplementary Figure S1. ( E ) Statistical analysis of the RecA filament distribution in the samples illustrated in panels B–D. Filament categories are explained in Materials and Methods. In general, full, medium, small and very small filaments reflect declining filament lengths. Linear molecules are the subset of filaments present on broken DNA circles. Circular ssDNA molecules coated with SSB (pointed out in panel D) do not contain visible RecA protein. The error bars are representative of a standard deviation of three independent experiments. Molecules counted ( n ) = 580, 675 and 870 for the RecA stage (panel B), the lag (panel C) and the UvrD stage (panel D), respectively. Figure Legend Snippet: UvrD effects on RecA filaments are UvrD concentration-dependent. RecA (2 μM) filaments were allowed to form on 3 μM circular M13mp18 ssDNA in the presence of ATP and SSB (0.3 μM) as described in Materials and Methods. After 15 min (arrow), UvrD was added at the concentrations shown (in nM). The data following this addition have been corrected for a small decline in absorption caused by a dilution effect. The effects of UvrD are detected through changes in the consumption of ATP. The average rate of ATP hydrolysis in the early RecA stage (prior to UvrD addition) is 30 μM/min (yielding an apparent k cat (assuming all potential DNA binding sites are occupied by RecA) of 30 min −1 ), reflecting the near saturation of the 1 μM available RecA binding sites on the ssDNA. Figure Legend Snippet: UvrD inhibits RecA-catalyzed ATPase activity. Reactions were carried out as described in Materials and Methods, and contained 3 μM circular M13mp18 ssDNA and 2 μM RecA protein. The reaction was initiated by addition of ATP (3 mM) and SSB (0.3 μM) as a mixture at t = 0. In the reaction shown, 50 nM UvrD (30 nM) was added at the point indicated by the arrow. The data following this addition have been corrected for a slight decline in absorption caused by a dilution effect. The ATP consumption profile can be divided into three stages. The first stage (prior to UvrD addition) reflects the constant rate of ATPase activity by RecA in the presence of ATP and DNA. A lag stage immediately follows the addition of UvrD and is defined by a decline in ATPase rate. The final stage is the UvrD stage, characterized by a large increase of ATP consumption (greater than the highest level of ATPase possible due to the RecA protein present) attributed to UvrD translocation on the DNA after RecA removal. Confirmation of RecA removal is presented in subsequent figures. Figure Legend Snippet: UvrD-mediated disassembly of RecA filaments formed on linear ssDNA. ( A ) WT RecA was allowed to form filaments on 3 μM poly(dT) DNA (average length 225 nucleotides) in the presence of ATP. All reactions in this and subsequent panels that utilize poly(dT) do not include SSB. After 15 min UvrD was titrated into the reactions at final concentrations shown on the graphs (in nM). ( B ) Reactions were carried out as in panel A, but UvrD K35 I was substituted for WT UvrD in the indicated reactions. ( C ) RecA E38K resists inhibition by UvrD. The RecA E38K variant was allowed to form filaments on poly(dT) as in panels A and B, and UvrD was titrated into the reaction at final concentrations (in nM) shown in the figure. ( D ) WT RecA protein was incubated in the presence of ATP either with 3 μM circular M13mp18 ssDNA (dashed lines) or linear M13mp18 ssDNA (solid lines). After 15 min UvrD was titrated into the reactions at the indicated concentrations (in nM). The average rate of RecA-mediated ATP hydrolysis on circular M13mp18 ssDNA is 24 μM/min and on lssM13 DNA is 21 μM/min. These reactions, and those in panel E, included SSB added with the ATP during the initial formation of RecA filaments. ( E ) The RecA E38K mutant was used. The experiment was set up as in C, but linear M13mp18 ssDNA was used in place of poly (dT). 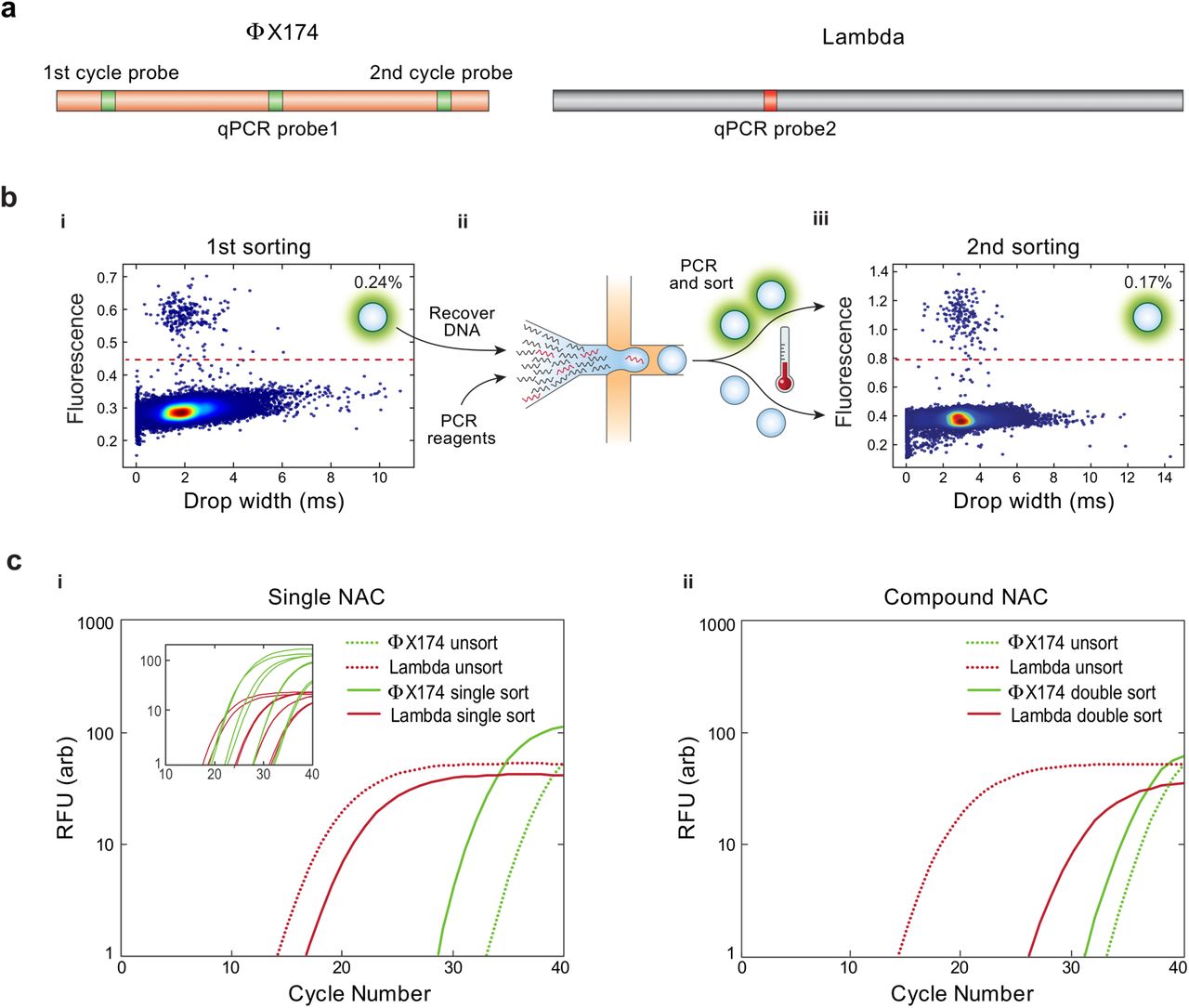 Figure Lengend Snippet: Enrichment of ΦX 174 DNA from a background of Lambda DNA with compound NAC. (a) TaqMan assays detect droplets containing ΦX 174 (green) and Lambda (red) DNA. (b) The microfluidic sorter interrogates the droplets for fluorescence and sorts PCR positives. (i) Scatter plot of fluorescence versus size of drops from first NAC round, with 0.24% positive. (ii) DNA from the first round is recovered, diluted, and processed again. (iii) Scatter plot of fluorescence versus size of drops from the second NAC round, with 0.17% positive. (c) qPCR plots for (i) single and (ii) double-enriched DNA; based on curve shifts, single-round sorting enriches ΦX 174 by ∼150-fold, and double-round sorting by ∼16,000-fold. Inset in (i) shows ΦX 174 and Lambda standard curves. Figure Lengend Snippet: ICP8 mediates strand exchange of preresected dsDNA. A, The 1.5 kb 32 P-labeled dsDNA fragment was incubated in strand exchange buffer for 20 minutes in the presence (for lanes 5–8) or absence (for mock, lanes 1–4) of UL12. DNA was deproteinized with proteinase K, extracted with phenol/chloroform, and ethanol-precipitated. This material was resuspended in low TE (10 mM Tris–HCl (pH 7.5), 0.1 mM EDTA) and used in the strand exchange assay. The strand exchange reaction was performed as described in Materials and Methods with 1.6 nM ssM13wins DNA (100 ng) and 1 nM (approximately 20 ng) 1.5 kb 32 P-labeled dsDNA as substrates. Incubation was for 20 minutes at 37 °C. The phosphorimage of the dried gel is presented. B–D, Linear double-stranded ϕX174 DNAwas preresected with UL12 and then incubated with circular ϕX174 ssDNA in the presenceofICP8in strand exchange buffer for 10–20 minutes at 37 °C. The samples were deproteinized and complexed with E. coli SSB to extend the single-stranded segments and further prepared for EM as described in Materials and Methods. The expected strand exchange products are seen: alpha (B), sigma (C), and gapped circle (D). The scale bar represents the length of 1000 bp of dsDNA.

Figure Lengend Snippet: Strand exchange by UL12 and ICP8. A, A representation of the strand exchange reaction involving UL12, ICP8, and bacteriophage-derived ssDNA circles and linearized dsDNA. The products of the reaction, with structures referred to as sigma, alpha and gapped circle are shown. B, Strand exchange by UL12 and ICP8 using ϕX174 DNA as substrates. Assay conditions were as described in Materials and Methods, using 100 ng of each of the DNA substrates per 20 µl reaction. Incubations were at 37 °C for 1–20 minutes, as indicated. Lane 1, Invitrogen 1 kb ladder marker; lane 2, no protein control; lane 3, incubation of the DNA substrates with ICP8 only; lanes 4–9, incubation of the DNA substrates with ICP8 and UL12 for 1, 2, 5, 7, 10, and 20 minutes, respectively. A photograph of the ethidium bromide-stained gel is presented. Se, strand exchange products; ds, ϕX174 dsDNA linearized by XhoI; ss, ϕX174 ssDNA.