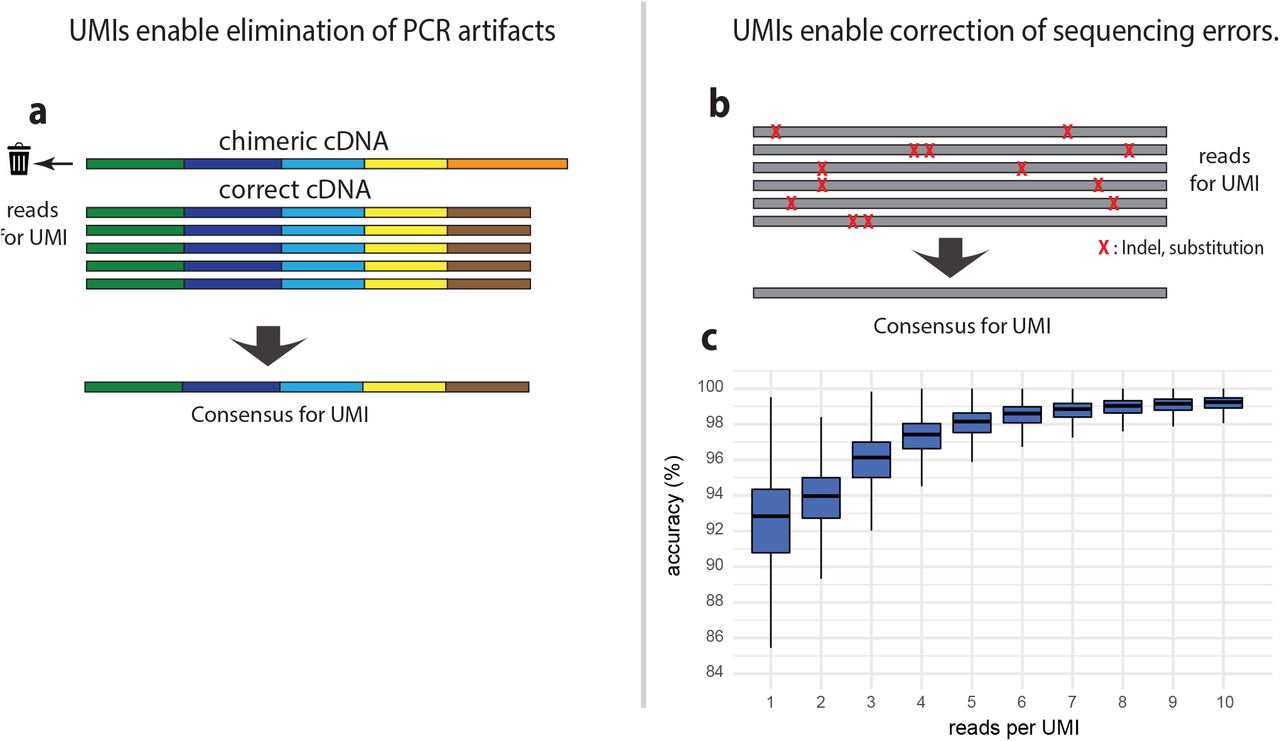 Figure Lengend Snippet: UMIs enable identification of PCR artefacts and sequencing error correction. (a) UMIs allow identification and elimination of reads originating from chimeric cDNA generated during PCR amplification. Chimeric cDNAs are mainly generated in later PCR cycles when cDNA concentration becomes higher. This results in a small fraction of reads ( , n : PCR cycle where chimera is generated) with aberrant exon layout. Those inconsistent reads are discarded, and the remaining reads are used to define the consensus cDNA sequence for the UMI. (b, c) UMIs enable sequencing error correction. Generation of consensus sequences for all reads associated with each UMI allows to obtain high accuracy sequences for each UMI (RNA molecule) despite the low accuracy of each Nanopore read. (c) the box plots indicate the accuracy of the cDNA consensus sequences (% identity to the reference genome) for different UMI sequencing depths. Boxes represent the 25% quantile to 75% quantile range, upper and lower edges of notches are median +/− 1.58 * IQR / sqrt(n) (IQR : inter quantile range, n: sample size).

Article Snippet: Grouping of reads that corresponded to the same allowed correction of sequencing errors, generation of consensus sequence for each RNA molecule and identification of such sequence heterogeneity within single cells ( ). 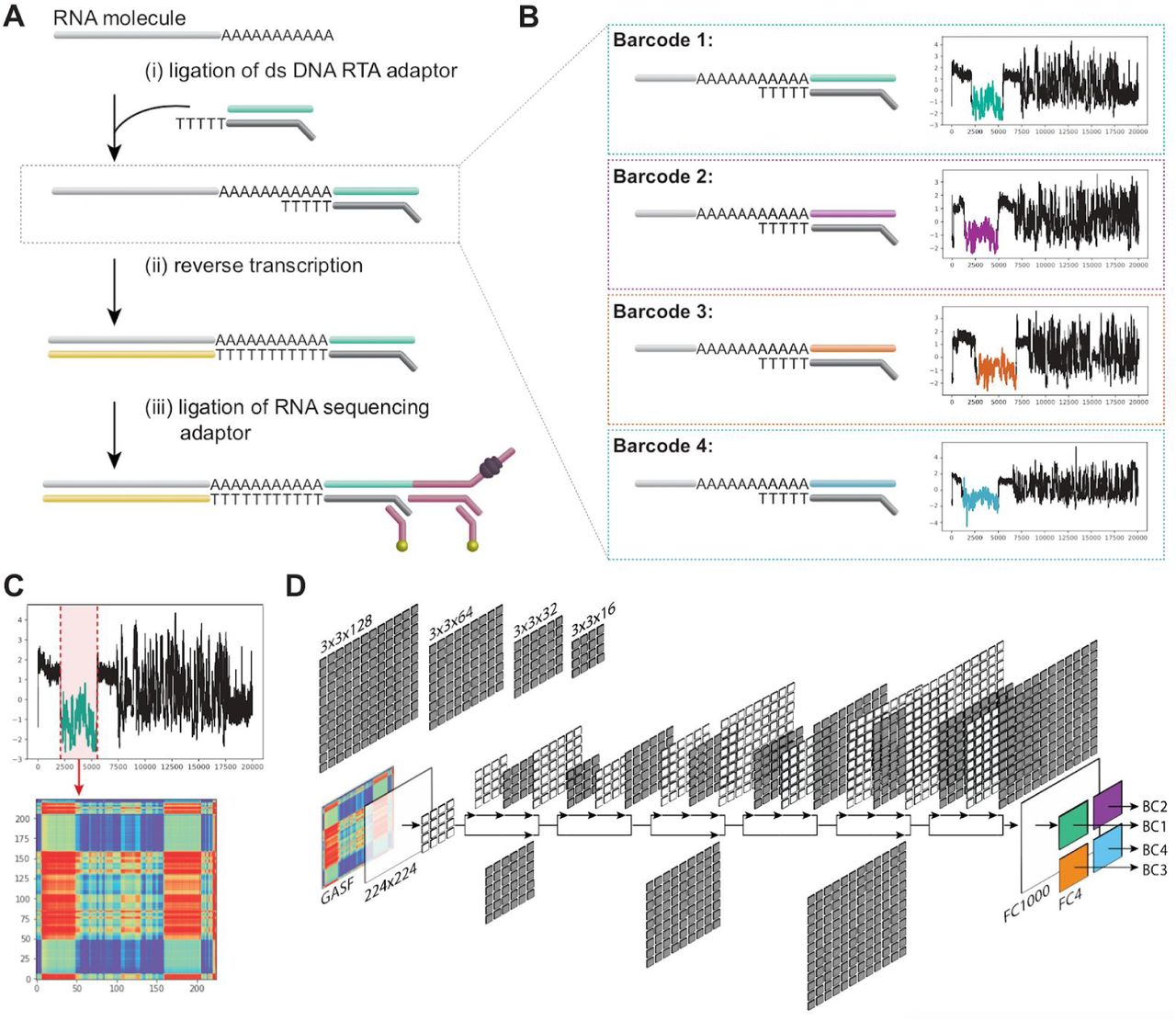 Figure Lengend Snippet: Direct RNA barcoding and demultiplexing (A) Overview of Oxford Nanopore sample preparation protocol for native RNA sequencing. (B) Adaptation of (A) to include custom DNA barcodes. (C) Barcode segmentation and transformation, where the electric current associated with a barcode adapter (highlighted in red) is extracted and converted into an image using GASF transformation. (D) Deep learning is used to classify the segmented and GASF-transformed squiggle signals into their corresponding bins, without the need of base-calling the underlying sequence. The convolution architecture of the final residual neural network classifier (ResNet-20) described in this work: FC = Fully Connected layer.

Article Snippet: sequencing has enabled sequencing of without conversion to cDNA, thus opening the gates to a new era for the unbiased study of RNA biology. Figure Lengend Snippet: Nanopore Sequencing. (A) Schematic of the library preparation procedure for Nanopore direct RNA sequencing. PolyA RNA is enriched using oligo-dT primers and a reverse transcription (RT) adaptor is ligated. After second-strand synthesis, the sequencing adapter RMX, which is preloaded with motor protein and tether protein, is then ligated. (B) Schematic of Nanopore direct RNA sequencing. The motor protein feeds the RNA molecule through the nanopore in the 3′–5′ direction. The five bases passing through a nanopore cause a characteristic disruption in the current which is stored as raw signal. (C) A current trace (squiggle plot) showing the raw signal generated by nanopore sequencing of a single mRNA molecule. Leader and adapter sequences are shaded yellow and pink, the polyA tail is shaded green, and the mRNA body is shaded orange. The inset (top right) illustrates how the nucleotide sequence is inferred from the raw current trace originating from a sliding window of five nucleotides (k-mer). Machine-learning algorithms are then used to calculate the probability that a signal corresponds to a given k-mer, thus inferring the nucleotide sequence from the calculated probabilities. (D) The two features recorded by Oxford Nanopore Technologies (ONT) sequencers are the current signal (in arbitrary units, AU) and the time that a given k-mer takes to transverse the pore (signal length, retention time or 'dwell'). The scatter plot depicts the distribution of mean current and signal length for 100 reads each in a different sequence context of the unmodified k-mer CACCC (blue) and the modified k-mer CAm 5 CCC (orange, identified by parallel bisulfite sequencing, where m 5 C is 5-methylcytosine). Note that, despite an identical k-mer, the signal varies as a result of different measurements and intrinsic noise in different reads, and possibly also by the different surrounding sequence of a given k-mer. This variability can be represented as a signal density plot for each k-mer, depicted in the top-right inset (density distribution for raw current signal). RNA modifications can affect raw current reads as well as signal length, resulting in a shift in signal distributions (e.g., divergence between blue and orange). However, these signal shifts can be modest, as shown by the largely overlapping density plots for CACCC and CAm 5 CCC, making accurate prediction of modified bases a computational challenge. Plots were generated with Sequoia, an interactive visual analytics platform for interpretation and feature extraction from ONT sequencing datasets [ 138 ].

Article Snippet: We aim to highlight the strengths and limitations of current methods regarding specificity, sensitivity, and reproducibility, with a particular focus on emerging by . 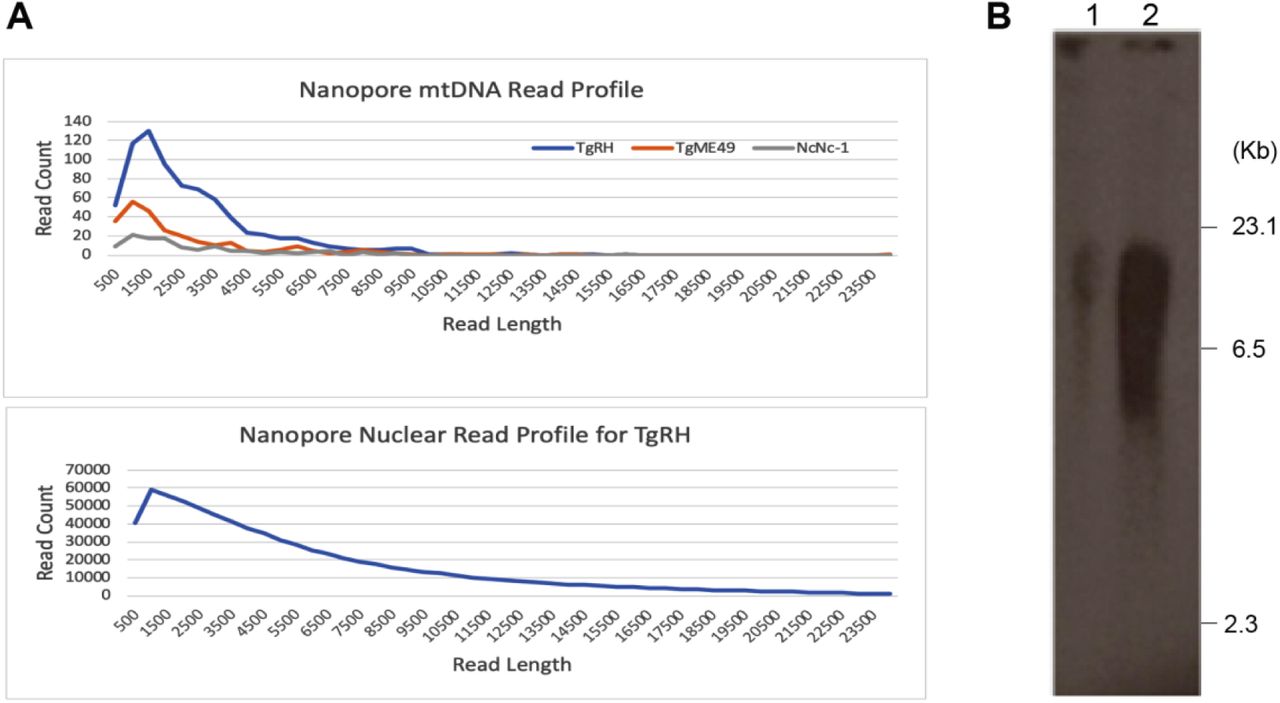 Figure Lengend Snippet: Oxford Nanopore Technology read length distribution and CHEF electrophoresis of DNA from mitochondrial enriched T. gondii cell fractions. (A) Profile of read counts plotted by length for mtDNA (top) and nuclear (bottom). Species and strains are as indicated in the legend. (B) Southern of a Contour-clamped homogeneous electric field gel electrophoresis of T. gondii total DNA (Lane 1) and mitochondrial-enriched DNA (Lane 2) probed with a 1012 bp section of the cob gene. DNA ladder is as indicated. A plot of the ME49 and Nc-1 nuclear reads is located at the bottom of Table S3 since they could not be plotted here due to difference in read count scale. 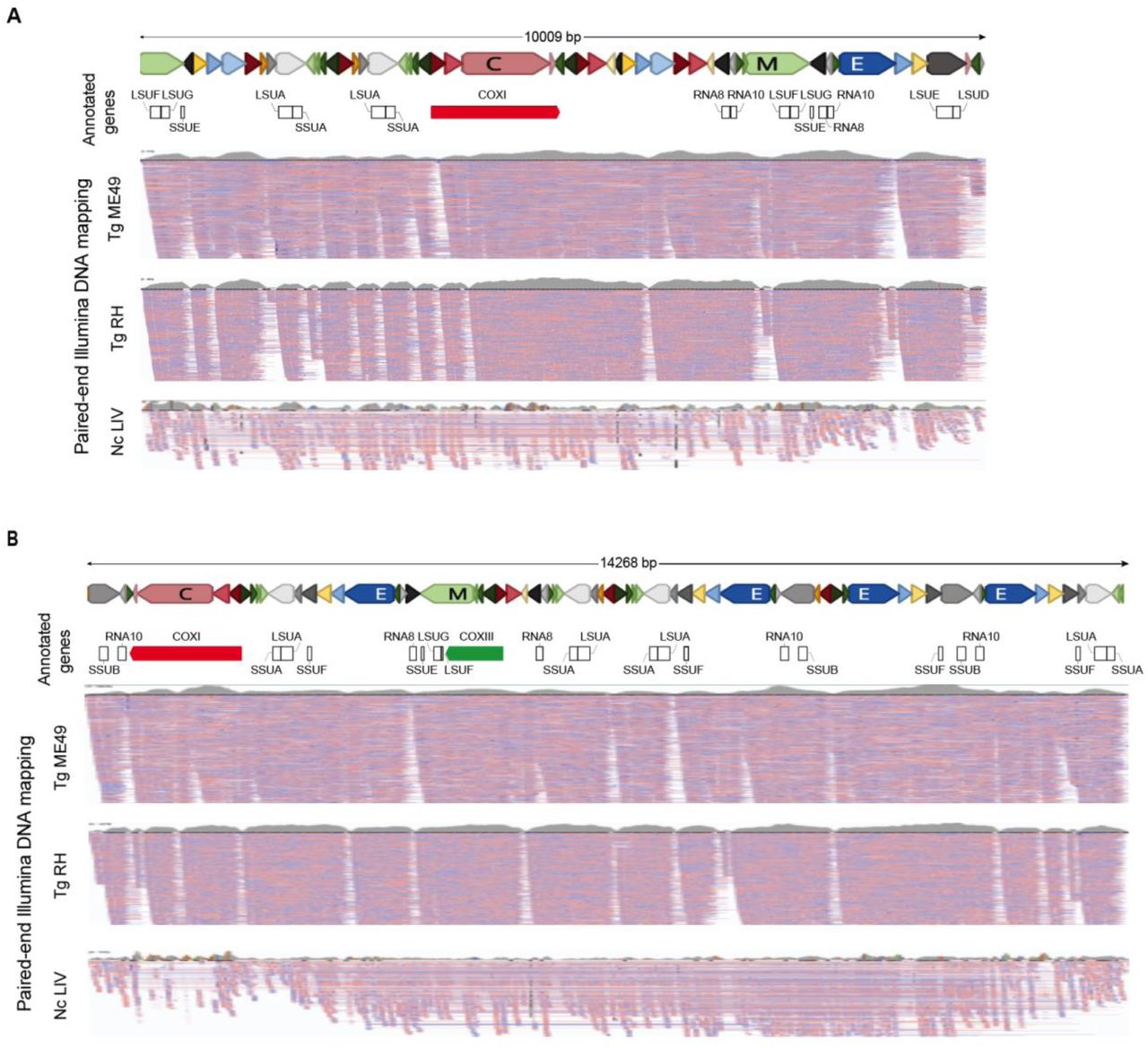 Figure Lengend Snippet: Annotated Toxoplasma gondii ME49 Nanopore mtDNA reads. Each panel represents the annotation of a single Nanopore read with SBs. There are no intervening nucleotides between SBs. The length of the read is indicated above the annotation. MtDNA-specific paired-end Illumina reads generated from T. gondii ME49 DNA (SRR9200762) were mapped to the Nanopore sequences and the alignment was visualized using the Integrated Genomics Viewer (IGV). Both Illumina read ends were required to map at 100% identity. A histogram of read abundance is shown in grey just below each annotated Nanopore read. Red and blue lines below each histogram indicate the mapped paired-end reads. Not all mapped reads are shown. 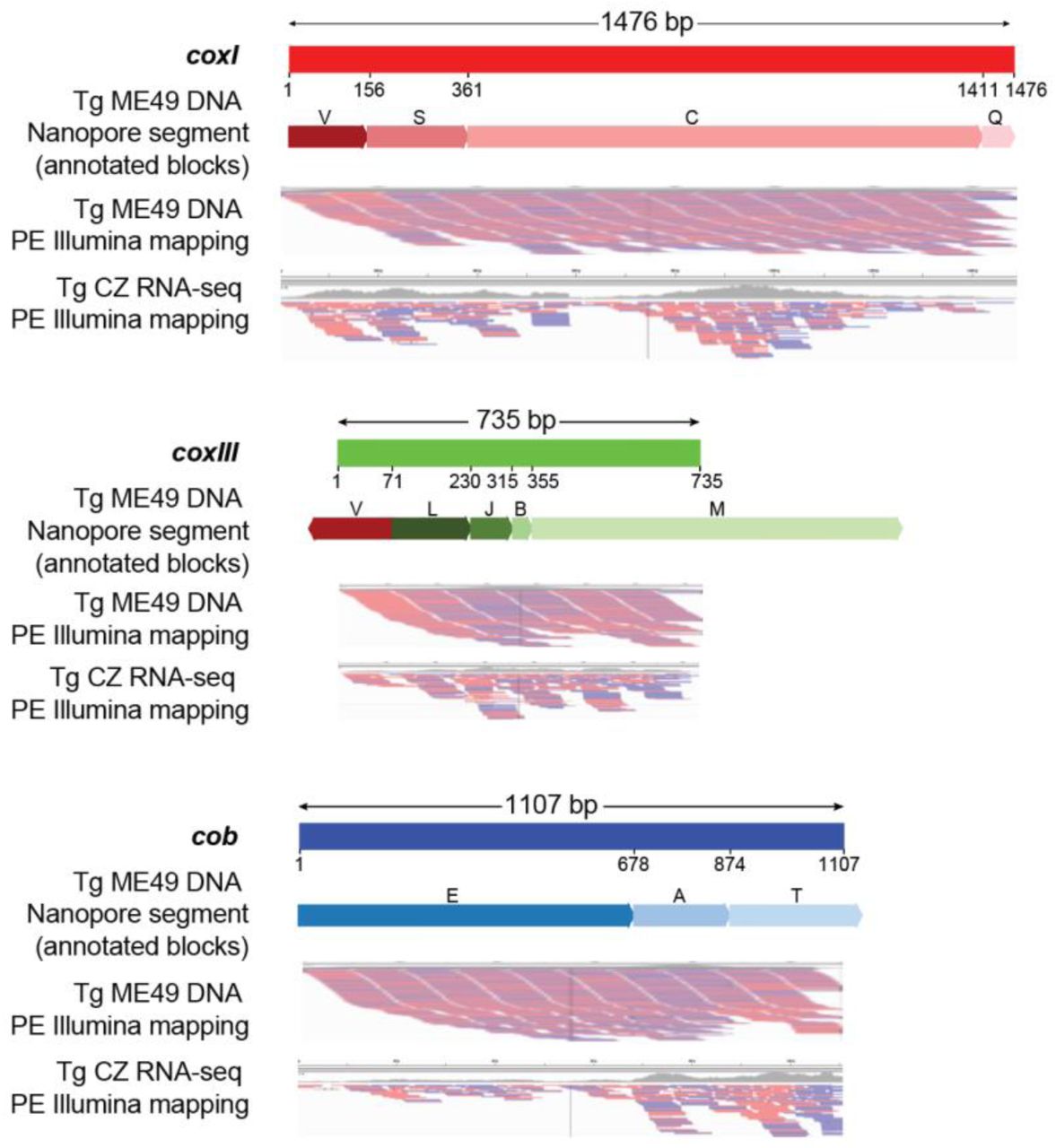 Figure Lengend Snippet: Full-length protein-encoding genes in the T. gondii mt genome are supported. Segments of a Nanopore read that can encode a full-length cytochrome gene are annotated with their sequence block name and shown below the schematic of each gene. Numbers below each gene schematic represent nucleotide start/stop positions of a sequence block on the gene. All blocks are in the forward orientation except block V in coxIII . All blocks shown participate fully in creation of the cytochrome sequence except block V where only a part of coxIII is used, and sequence blocks M and T where only a portion of the block contributes to encoding a cytochrome gene. MtDNA-specific paired-end Illumina DNA (SRR9200762) and RNA-seq (SRR6493545) reads were independently mapped to each of the cytochrome gene sequences and visualized using IGV. Red and blue lines below each gene indicate the mapped Illumina paired-ends. Both ends were required to map.