Figure Legend Snippet: Effect of SPIG1 on BDNF expression in PC12 cells. A , Colocalization of SPIG1 and proBDNF in vesicle-like structures. Twelve hours after transfection with the indicated constructs, PC12 cells were differentiated with NGF as described in Materials and Methods.

Figure Legend Snippet: A mechanism model for the position-specific branching of RGC axons. Both ephrin-A/EphA signaling (light yellow) in the distal part and proBDNF/ephrin-A-p75 NTR signaling (yellow) in the proximal part have been shown to mediate the suppression of branching

Figure Lengend Snippet: Effect of SPIG1 on BDNF expression in PC12 cells. A , Colocalization of SPIG1 and proBDNF in vesicle-like structures. Twelve hours after transfection with the indicated constructs, PC12 cells were differentiated with NGF as described in Materials and Methods.

Figure Lengend Snippet: A mechanism model for the position-specific branching of RGC axons. Both ephrin-A/EphA signaling (light yellow) in the distal part and proBDNF/ephrin-A-p75 NTR signaling (yellow) in the proximal part have been shown to mediate the suppression of branching Figure Lengend Snippet: Proneurotrophins abolish retinal axon branching via p75 NTR . The outgrowth/branching assay was performed as described [ 6 ]. Cells from E8 nasal retina were electroporated with eGFP and plated on a merosin/laminin substrate. (A) Cultures were treated at 1 day in vitro with 5 ng/ml BDNF, or 5 ng/ml proneurotrophins in the presence of 5 ng/ml BDNF as indicated, and fixed and analysed for branch number per axon after 3 days in vitro . The basal level of branching was not affected by treatment of retinal cultures with proneurotrophins alone. However, both proBDNF and proNGF led to a downregulation of the BDNF-induced branching to basal levels. (B) The length of outgrowth of retinal axons is not affected by treatment with neurotrophins and/or proneurotrophins. Axon length is given in arbitrary units. (C) To show that the proBDNF effect is mediated via p75 NTR , retinal cultures were electroporated either with an RNAi vector resulting in the knockdown of p75 NTR , with an RNAi vector not affecting p75 NTR protein levels or with empty vector. After plating, the cultures were treated with pro/neurotrophins as described in (A). p75 NTR knockdown obliterates the branch-suppressing effect of proBDNF. Three independent experiments were performed. The statistical analysis was done using Kruskal-Wallis test and Dunn's multiple comparison test post hoc . *** P Figure Lengend Snippet: Characterization of proBDNF monoclonal antibody 2B11. ( A ) ELISA assay for the immunoreactivity of 2B11 against human proBDNF prodomain, and human, rat and mice proBDNF proteins, and human mature BDNF (mBDNF). 2B11 has strong immunoreactivity against proBDNF and prodomain, but not mBDNF; ( B ) Representative Western blot of human proBDNF and mBDNF detected by 2B11 (dilution 1:2000), note that 2B11 specifically recognizes proBDNF, but not mBDNF. ( C ) Representative images of neurosphere radiant migration treated by proBDNF, mBDNF, sheep polyclonal anti-proBDNF antibody, mouse monoclonal anti-proBDNF antibody 2B11 and co-treatment. ( D ) Statistical analysis of neurosphere migration radiance assay (***P Figure Lengend Snippet: Upregulation of p75NTR and effect of local proBDNF injection on inflammatory reaction in mice. ( A ) Representative Western blot of p75NTR and sortilin ( a ) and the semi-quantitative analysis of their expression (b and c) after formalin intra-plantar injection (***p Figure Lengend Snippet: Upregulation of proBDNF in the local tissue in acute and persistent inflammatory pain in mice. ( A ) Representative Western blot (a) and their semi-quantitative analyses of mature BDNF (b), proBDNF (c) and their ratio (d) in the local tissue after 10 μL 5% formalin intra-plantar injection into Kunming mice (*p 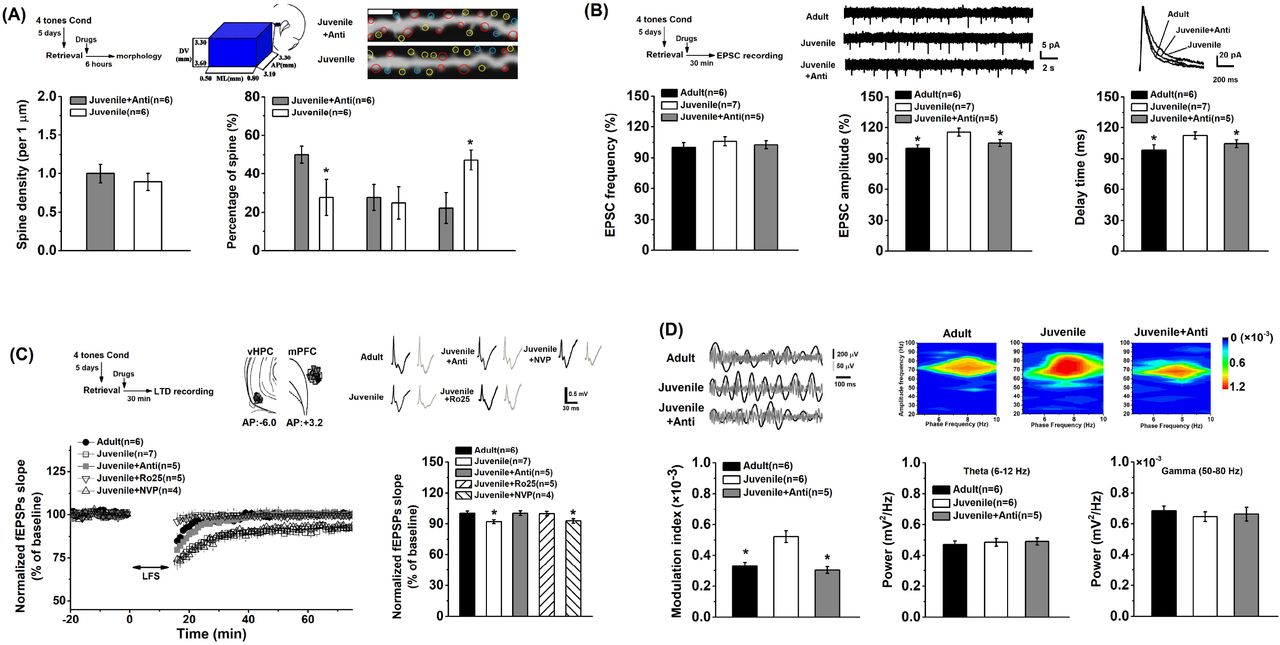 Figure Lengend Snippet: The increase proBDNF alters synaptic currents, promotes LFS-induced synaptic depression and strengthens the theta phase-gamma amplitude coupling during the PR-LTM test. (A) Schematic describing the timeline for morphological analysis (Top-left). Illustration of the region of interest in prelimbic images (Top-middle), and dendritic segment analysis for spine quantification (Top-right). Red circles indicated the mushroom type spine, yellow circles indicated thin type spine and blue circles indicated stubby type spine. Sample images were projected at minimal intensity and inverted, background was then subtracted, followed by brightness/contrast adjustment. Scale bars, 5 μm. Quantification of spine density (Bottom-left) and the proportion of spine (Bottom-right). No statistical difference in spine density was found between juvenile and adult groups. However, a significant higher proportion of thin type spine but a lower mushroom type spine was observed in juveniles compared with adults. (B) Schematic describing the timeline for EPSCs recordings (Top-left). Representative continuous traces (Top-middle) and average waveform (Top-right) of the pharmacologically isolated NMDA EPSCs in the prelimbic neurons of adult, juvenile and juvenile+anti groups. No change in the amplitude of EPSCs (Bottom-left) was found but the frequency (Bottom-middle) and decay time (Bottom-right) were significantly increased in juvenile group. The enhanced frequency and decay time of NMDA currents in juvenile group were inhibited after infusions of anti-proBDNF antibody. (* P 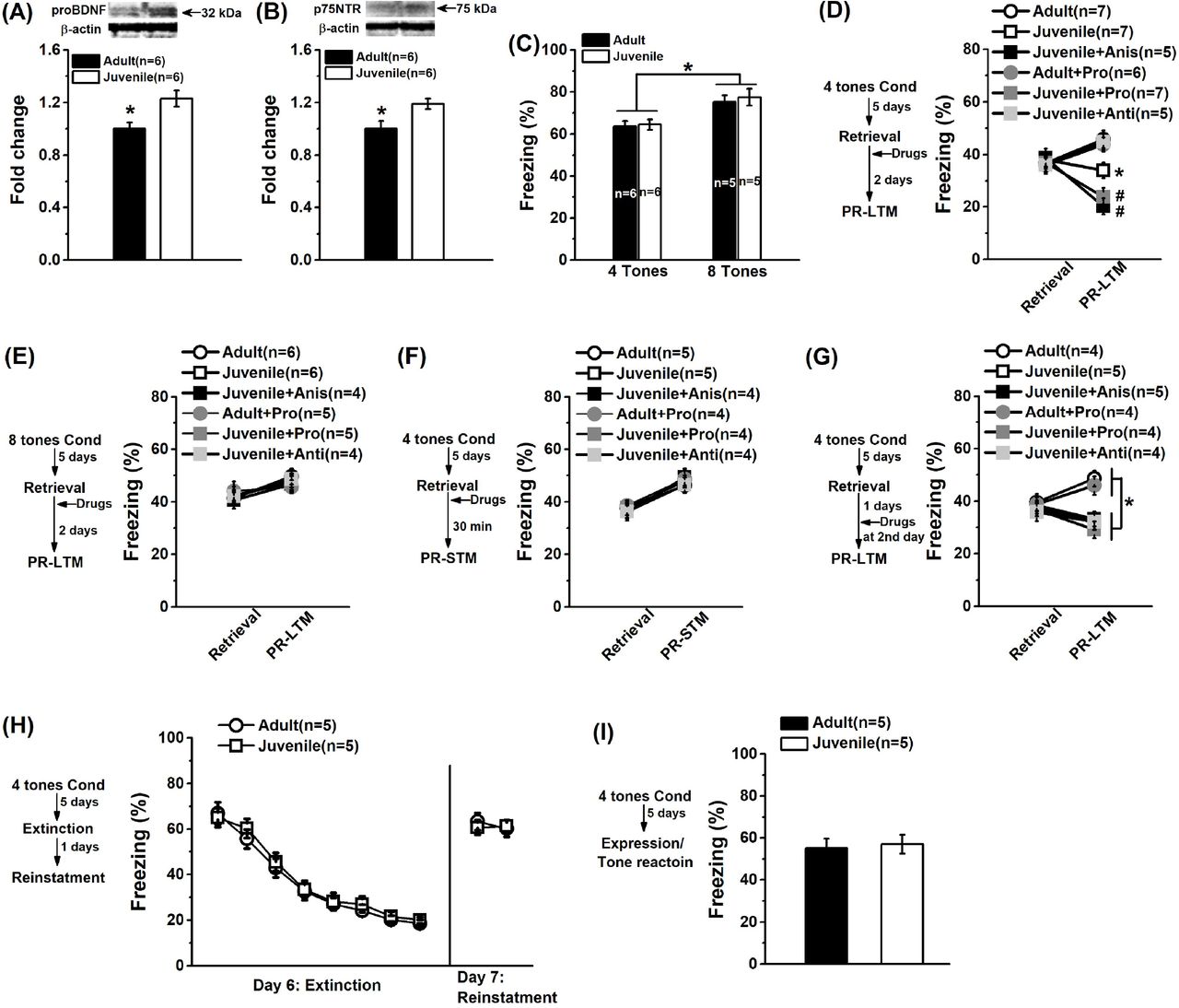 Figure Lengend Snippet: The higher prelimbic proBDNF expression during the juvenile period facilitates retrieval-dependent memory destabilization. Quantification of the proBDNF (A) and its receptor p75 NTR (B) levels in prelimbic cortex of juvenile and adult rats. Representative immunoblots the expression of proBDNF and p75 NTR (Top). A significant increase in the proBDNF levels was detected in juvenile group, as well the p75 NTR levels (Bottom). (* P

Figure Lengend Snippet: Up-regulation of proBDNF-p75NTR signaling mediated by NMDA-GluN2B contributes to enhance the modulation of existing fear memory traces in juvenile rats. (A) Schematic describing the behavioral timeline for the retrieval-dependent memory destabilization experiment using rats conditioned with four tones (Top). Immediately following the memory retrieval, the rats infused with TAT-Pep5, K252a or vehicle into the prelimbic cortex 15 min prior to the mBDNF, proBDNF or vehicle infusion. Two days later, PR-LTM was assessed by exposed the rats to the novel context. Similar, no significant difference in the percentage freezing during the memory retrieval but the percentage freezing level during the PR-LTM test was significant lower in juvenile group than adult group (Bottom). No obvious effect of mBDNF on freeze behavior was found. Infusions of p75 NTR blocker TAT-Pep5 could significantly enhance the percentage of freeze behavior. Meanwhile, infusions of TAT-Pep5, but not K252a, markedly blocked the effects of proBDNF treatment. (* P