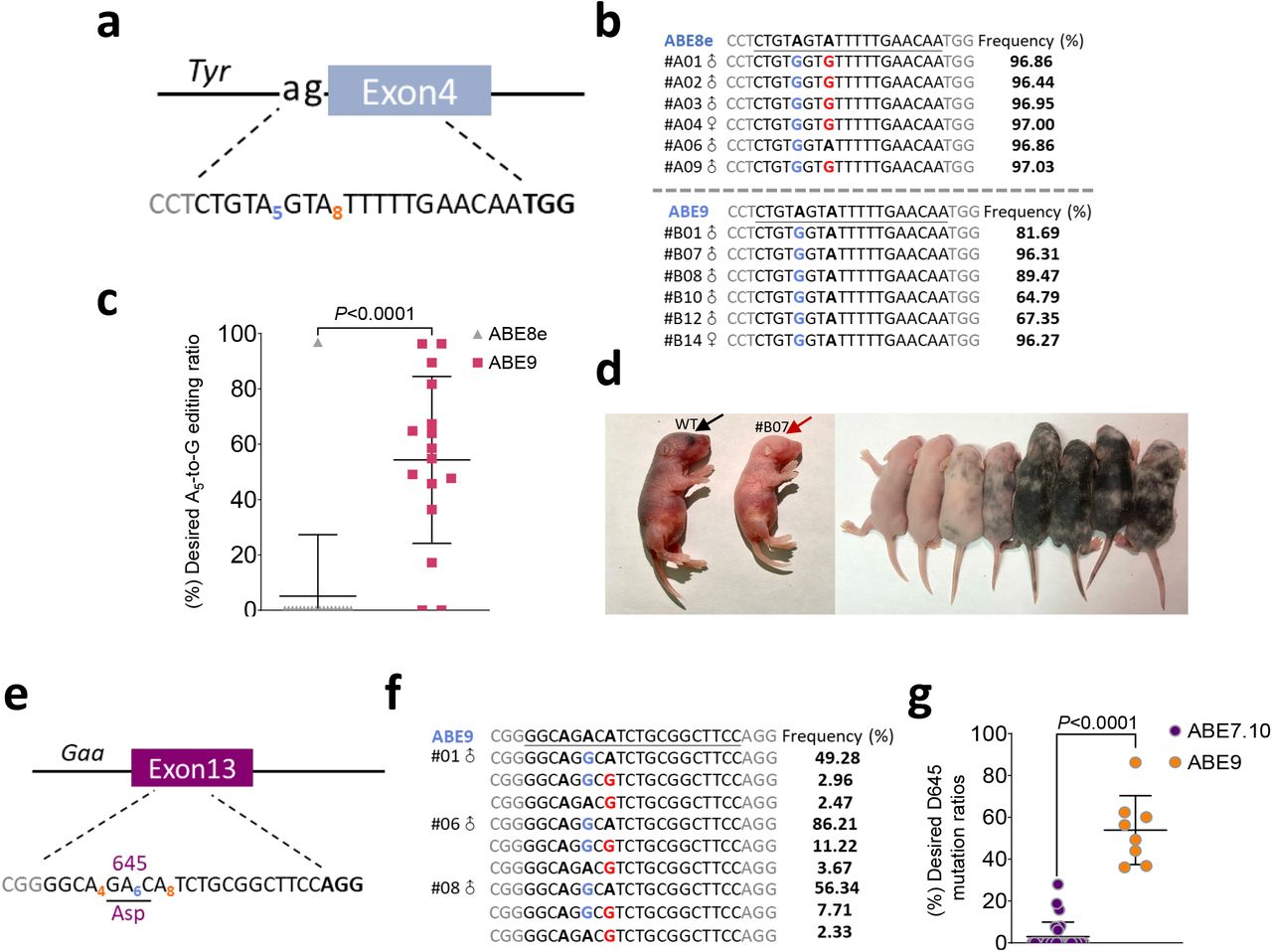 Figure Legend Snippet: Examination of precision in rodent embryos with ABE9. a , The target sequence of the splicing acceptor site in intron 3 of the mouse Tyr gene. The “ag” sequence of the splice acceptor site is shown in black. The PAM sequence and the sgRNA target sequence are both shown in black and the PAM sequence is in bold. Target A 5 is shown in blue with bystander A 8 marked in red. b , Genotyping of representative F0 generation pups from mouse embryos microinjected with ABE8e or ABE9. The guanines converted from editable As indicate desired editing in A 5 (blue) or undesired editing in A 8 (red). c , Single A 5 -to-G conversion ratio in F0 mice induced by ABE8e or ABE9. d , Phenotype of F0 generated by microinjection of sgRNA and corresponding ABEs. The photo on the left was taken when the mouse was at 7 days old, while the right one was at 14 days old. WT, wildtype. e , The target sequence of exon 13 (dark purple) in the rat Gaa gene. The sgRNA target sequence where target A 6 is shown in blue with bystander A 4 and A 8 marked in red is shown in black (PAM in bold). The triplet codon of D645 is underlined. f , Genotyping of representative F0 generation pups from rat embryos microinjected with ABE9 (desired editing in blue or undesired editing in red). g , Desired D645 mutation ratios in F0 rats induced by ABE7.10 or ABE9. In b and f , the percentage on the right represents the frequency of the indicated mutant alleles determined by HTS. In c and g , P value was determined by two-tailed Student’s t test. Statistical source data are provided online.

Figure Legend Snippet: Highly efficient and precise editing by ABE9 in rodent embryos. a , Genotyping of F0 generation y ABE8e or ABE9. b , Summary of the numbers of embryos used and the pups generated after microinjection of A or ABE9/sgRNA. c, d , Genotyping of F0 rats induced by ABE7.10 ( c ) and ABE9 ( d ) (desired editing in blue diting in red). e , Ratio of desired reads to total reads in F0 rats induced by ABE7.10 or ABE9. In a, c and d , the the right represents the frequency of the indicated mutant allele. Percentiles of each allele reads Figure Legend Snippet: Verification of Creg1 +/- mice. ( A ): Creg1 +/- mice and their wild type (WT) littermates were genotyped by RT-PCR. The CREG1 gene in Creg1 +/- mice was disrupted by replacing exons 2 and 3 with a neomycin-resistant (Neo R ) cassette. Representative genotyping image showed the wild type band of 168 bp amplicon and knockout (Neo R cassette) band of 750 bp amplicon. ( B ): Skeletal muscle (m.), epididymal white adipose tissue (WAT) and Liver from WT and Creg1 +/- mice were assessed for Creg1 expression by Western blotting and β-actin was used as a loading control. The lower panel showed the quantification of CREG1 intensity relative to β-actin (n = 3 from three independent experiments). Values are presented as means ± SEM. * P