Figure Lengend Snippet: Kinetics of changes in E. coli ML-35p outer and cytoplasmic membrane permeability measured with the use of chromogenic markers – the products of nitrocefin (OD 540 ) and ONPG (OD 405 ) hydrolysis, respectively. Outer membrane permeability resulting from incubation of bacteria with mini-ChBac7.5Nα at various concentrations (from 0.125 to 32 μM, highlighted with colors) in the absence (A) or in the presence (B) of 0.9% NaCl. Melittin and ChMAP-28 at concentration of 1 μM were used as positive control samples. (C) Analysis of outer membrane permeability resulting from incubation with ChMAP-28 or melittin in the presence of 0.9% NaCl. (D) Comparative analysis of cytoplasmic membrane permeability resulting from incubation with the individual ChMAP-28 or with its combinations with mini-ChBac7.5Nα. Melittin at concentration of 8 μM was used as a positive control. Three independent experiments were performed, and the curve pattern was similar for the three series.

Article Snippet: Peptide samples were placed in the wells of a 96-well plate with non-binding surface (NBS, Corning #3641), and the optical density (OD) of the solution rising due to the appearance of the hydrolyzed or ONPG was measured at 540 and 405 nm, respectively, using the Multiskan EX microplate reader ( Scientific). Article Snippet: The amount of degraded per minute was determined by Beer’s equation with the change in absorbance at OD486nm (Genesys 20 spectrophotometer, , USA) and a molar extinction coefficient of 20,500 M-1 .cm-1 , and the result was expressed as the nmol of nitrocefin degraded per minute per mg of protein [ ]. 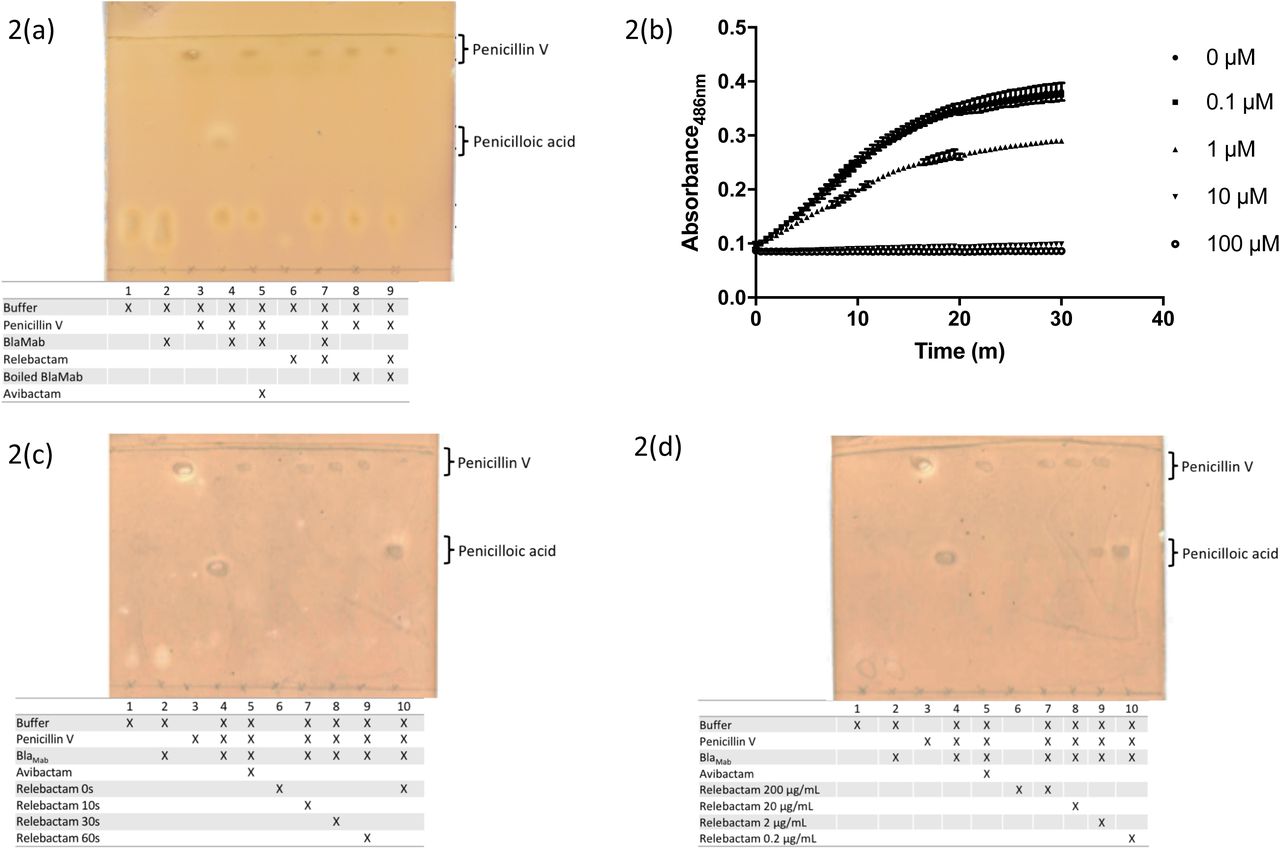 Figure Lengend Snippet: Biochemical analysis of relebactam inhibition of M. abscessus β -lactamase, Bla Mab . Our novel Thin Layer Chromatography (TLC) assay (2a) exhibiting the activity of Bla Mab in the turnover of penicillin V (high R f value) to penicilloic acid (lower R f value). In the absence, or termination of activity of Bla Mab (by boiling (100 °C) for 1 h) or addition of known inhibitor avibactam ( Lefebvre et al., 2017 ) (200 μg/mL) no lower R f value spot corresponding to penicilloic acid is seen on the TLC plate. The addition of relebactam to the reaction between Bla Mab and penicillin V also results in the absence of the lower Rf value spot, suggesting inhibition of Bla Mab (2a). This observed inhibition is validated by a spectrophotometric analysis, where the turnover of nitrocefin (100 μM) by Bla Mab (0.25 nM) was monitored at 486 nm with a varying concentration of relebactam (0, 0.1, 1, 10 and 100 μM). The increase in concentration of relebactam resulted in partial inhibition of nitrocefin turnover at 1 μM and total abrogation at 10 μM (2b). The initial velocity (v i ) of the reaction between Bla Mab and nitrocefin was monitored for a range of substrate concentrations (1-500 μM) and relebactam concentrations (0, 0.5, 0.75, 1 and 2.5 μM). This data was plotted v i vs [S] in order to determine K m values (2c/f). The values for K obs were obtained as previously described ( Dubée et al., 2014 ) and plotted against relebactam concentrations ([I]) to deduce a carbamylation rate ( K 2 / K i ) for Bla Mab (2d). The kinetics of Bla Mab decarbamylation were assessed to show the recovery of nitrocefin hydrolysis by Bla Mab after inhibition by relebactam in order to derive a K off value (2e). Kinetic parameters were derived as described previously (2f) ( Dubée et al., 2014 ).

Article Snippet: The hydrolysis of was monitored at 486 nm using a Multiskan Go plate reader ().