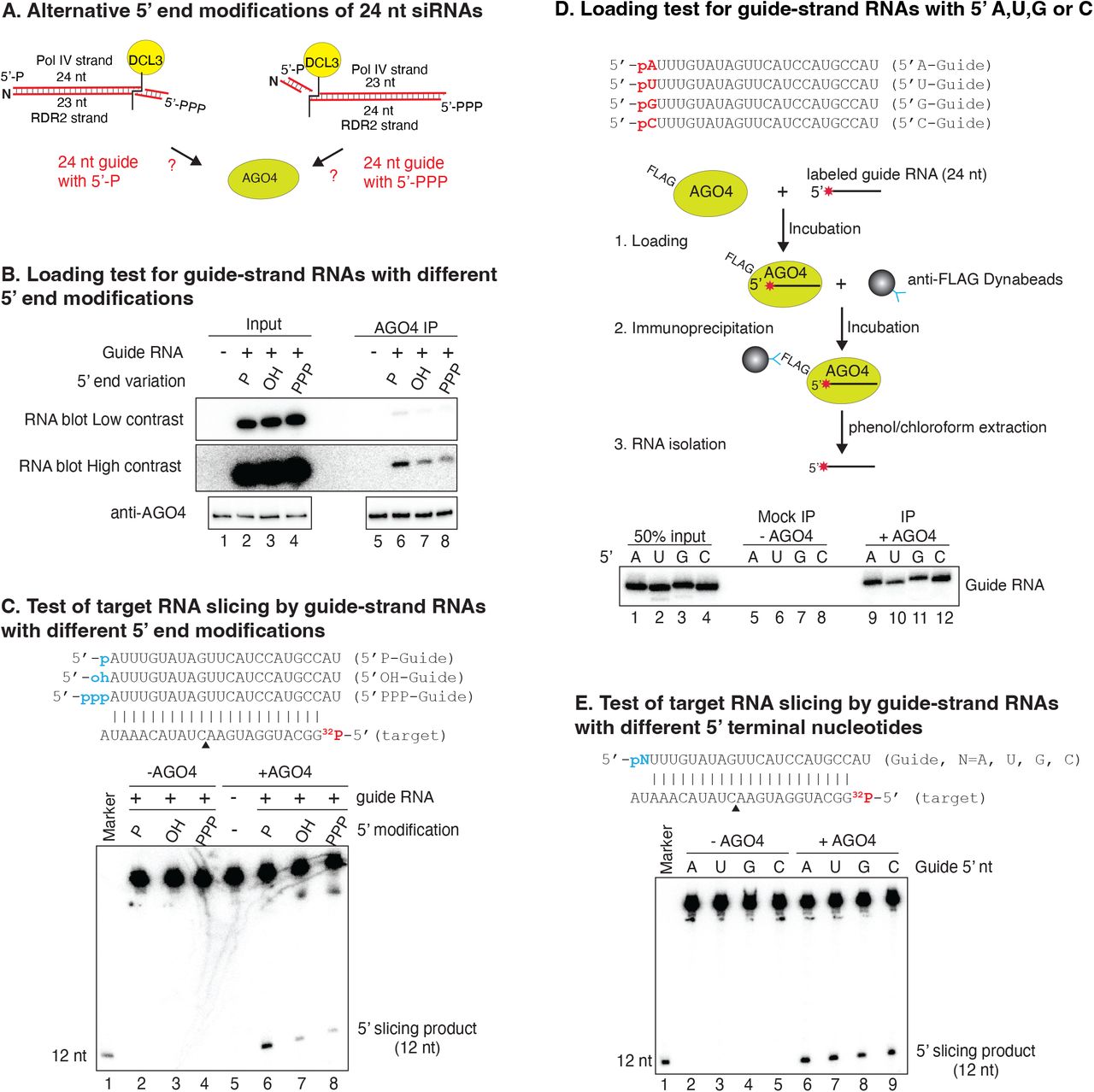 Figure Legend Snippet: Tests of guide strand 5’ chemical groups and nucleotides in AGO4 loading and slicing A . Cartoon illustrating alternative features of precursors and diced siRNA duplexes. B . Test of AGO4 loading for 24 nt guide RNAs with 5’ monophosphate (P), hydroxyl (OH), or triphosphate (PPP) groups. Input samples are shown in lanes 1-4. RNAs that co-IP with AGO4 are in lanes 5-8. RNAs were subjected to denaturing PAGE, transferred to membranes, and detected by RNA blot hybridization. Controls in lanes 1 and 5 lacked RNA. C . Target RNA slicing programmed by guide siRNAs with different 5’ end modifications. 24 nt guide RNAs with different 5’ groups, paired with a 5’ end-labeled 23 nt target RNA, are shown at the top. The predicted slice site is denoted by a black triangle. The alternative guide RNAs were incubated with or without AGO4 followed by incubation with 32 P-labeled 23 nt target RNA. RNAs were then subjected to denaturing PAGE. An end-labeled 12 nt size marker was run in lane 1. Lane 5 is a control in which AGO4 was included but guide RNA was omitted. D . Test for preferential loading of guide RNAs with different 5’ nucleotides. 24 nt RNAs with each of the four possible nucleotides at their 5’ ends were 32 P-end-labeled and incubated with FLAG-tagged recombinant AGO4. RNAs associated with AGO4 captured on anti-FLAG Dynabeads were resolved by denaturing PAGE (lanes 9-12). In mock IP control reactions (lanes 5-8), AGO4 was omitted. Lanes 1 to 4 show input RNA. See also Supplementary Figure S7 . E . Test of target RNA slicing programmed by guide RNAs with different 5’ nucleotides. The different guide RNAs were incubated with AGO4 (lanes 6 to 9) or without AGO4 (lanes 2 to 5) then incubated with end-labeled 23 nt target RNA. RNAs were then purified, subjected to denaturing PAGE and autoradiography. 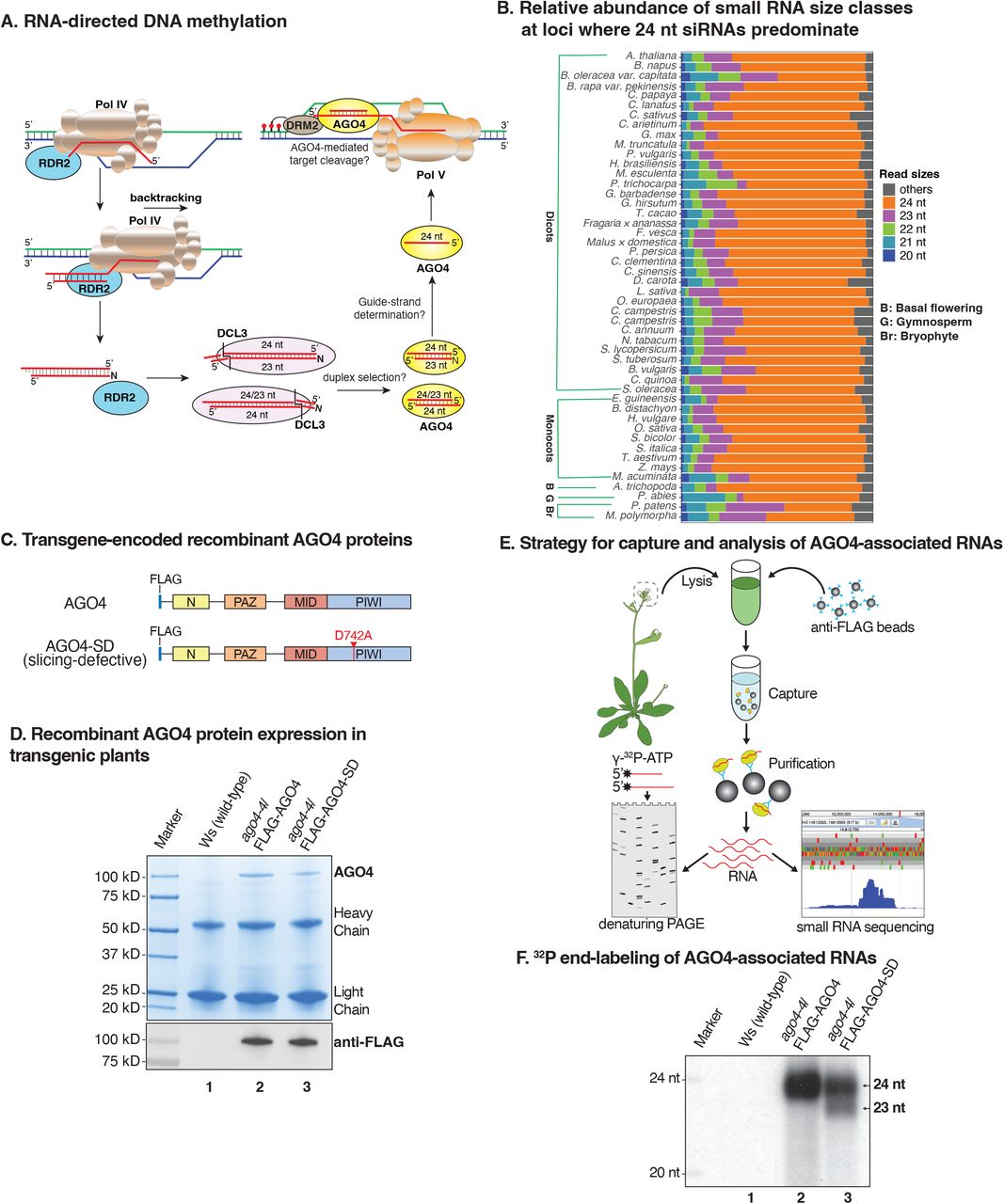 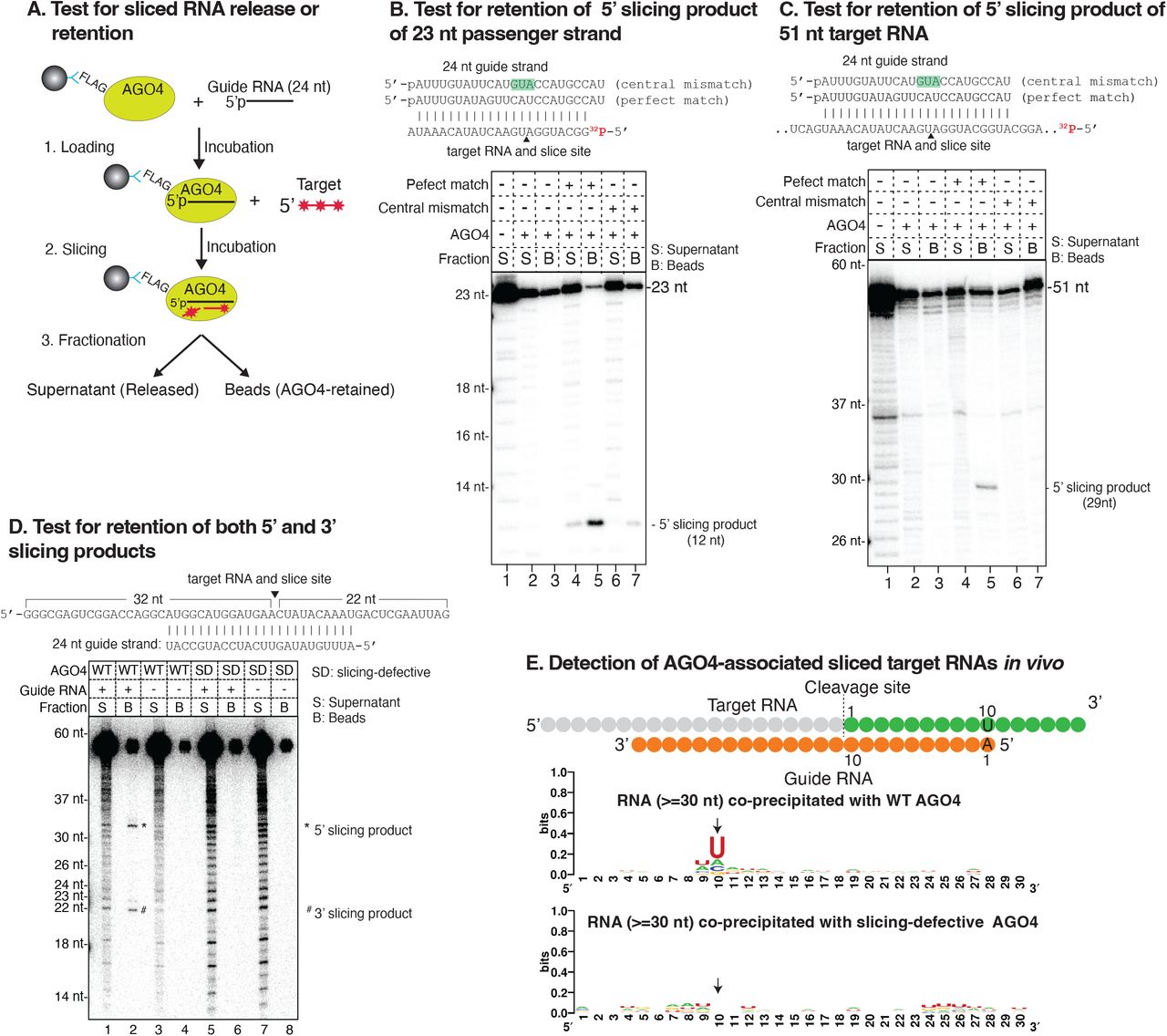 Figure Legend Snippet: AGO4 retains sliced target RNAs in vitro and in vivo A . Cartoon of the strategy for testing AGO4 release or retention of sliced target RNAs. B . Test for retention of 23 nt target strand 5’ cleavage products. At the top are sequences of a 24 nt guide RNA with 100% complementarity to the 32 P-labeled target RNA s and a guide RNA with three nucleotides of non-complementarity (highlighted in green) to the target. In the experiment, FLAG-AGO4 immobilized on anti-FLAG Dynabeads was incubated with buffer only (lanes 2 and 3), with the 24 nt guide RNA having perfect complementarity to the target RNA (lanes 4 and 5), or with 24 nt guide RNAs with mismatches to the target RNA (lanes 6 and 7). RNAs in the supernatant (S) and washed bead (B) fractions were purified, subjected to denaturing PAGE and autoradiography. Lane 1 is an anti-FLAG IP control using non-transgenic plants. C . Test for retention of 5’ cleavage products of a 51 nt RNA target. The experiment was conducted as for panel B. D . Both 5’ and 3’ cleavage products of long RNAs are retained by AGO4 in vitro . The experiment was conducted as for panel B except that a body-labeled 54 nt target RNA was used. The expected sizes of its slicing products are 22 and 32 nt. E . Sliced products of RdDM target locus RNAs are retained by AGO4 in vivo . The cartoon shows how 24 nt guide RNAs of variable sequence (orange) would pair with complementary target RNAs. 5’ and 3’ cleavage products are color-coded grey and green respectively. At position 10 of the 3’ slicing products (green fragments), a strong uridine (U) signature is expected due to complementarity to the adenosine (A) at the guide strand 5’ end. The sequence logos below show RNA-seq analyses for RNAs longer than 30 nt that co-IPed with wild-type AGO4 or AGO4-SD. The arrow denotes the position of the expected U signature. 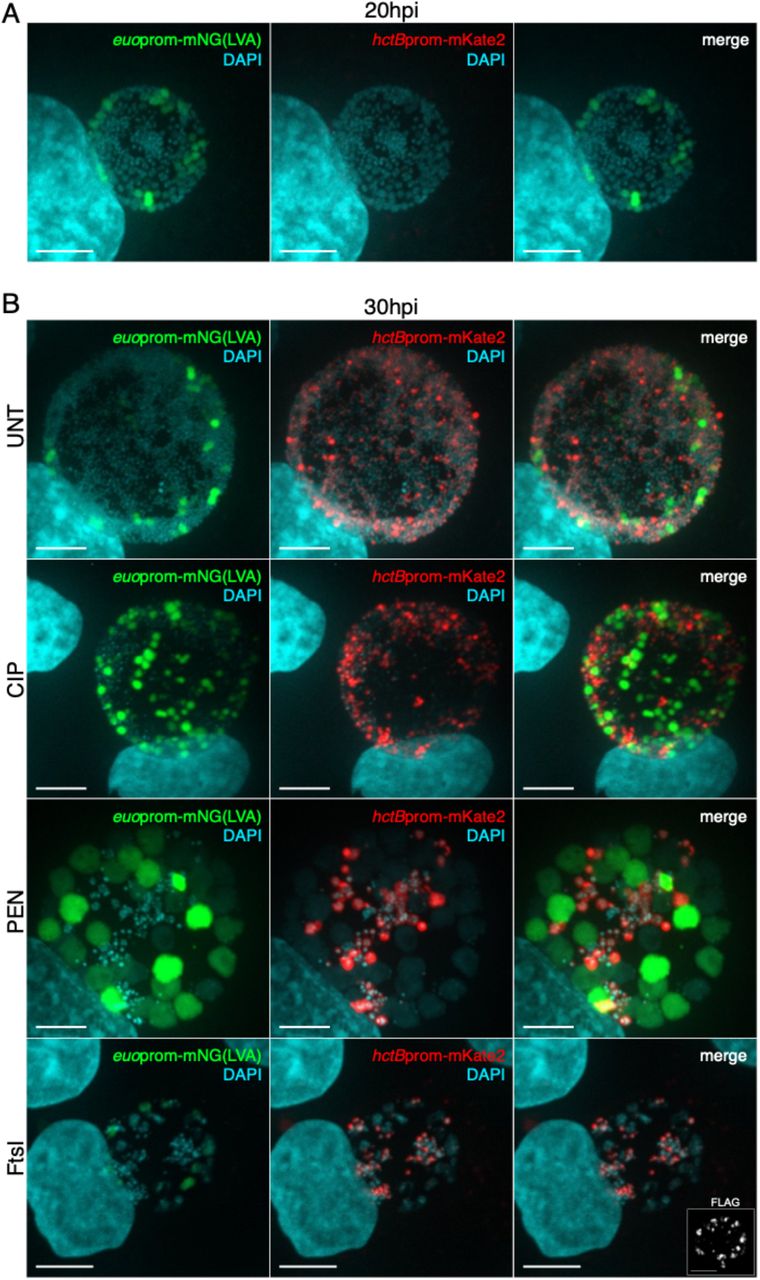 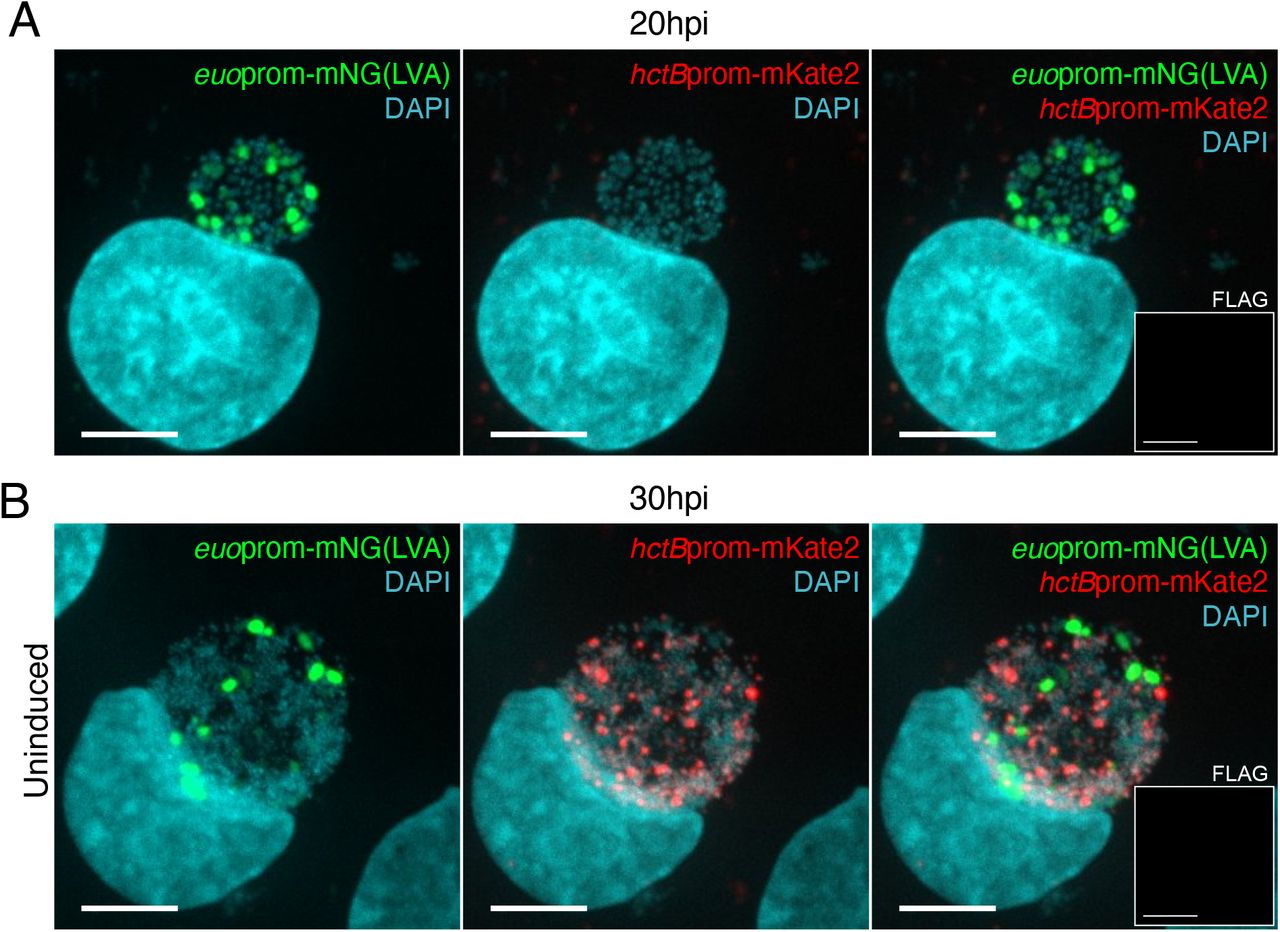 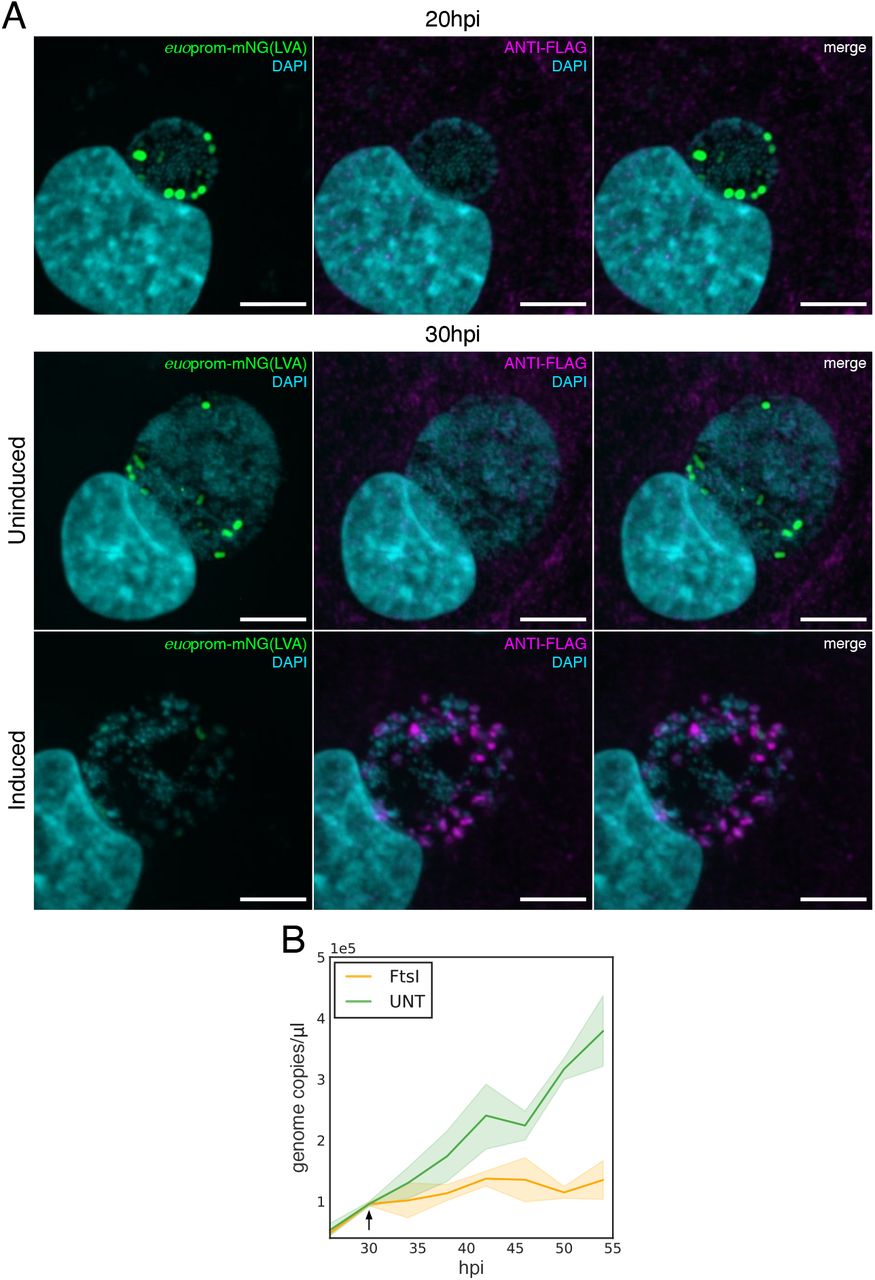 Figure Legend Snippet: Purified LRRK2 is enzymatically active. a , Domain cartoon of the purified proteins used in the functional assays. b , Coomassie-stained SDS gels showing fractions obtained during the purification of recombinant full-length LRRK2 and RCKW fragment from Expi293 cells. Proteins were purified on anti-flag M2 resin, eluted from the beads using the FLAG peptide, followed by GST-Protease to remove the tag and further purified by removing the GST-protease by Glutathione-agarose. LRRK2- and RCKW-containing supernatants (Sup) were dialyzed before use. c , Anti-FLAG tag Western blot (WB) and Coomassie-stained gel showing successful removal of the flag tag. d , In vitro GTPase activity assay. The GTPase activity of LRRK2 (9 µM) and dynamin 1 (Dyn 1) (0.8 µM) were measured by phosphate release at saturating concentrations of GTP (0.5 mM). Left, LRRK2 has detectable GTPase activity but a much lower activity than dynamin 1. Right, Coomassie-stained SDS-PAGE showing the proteins used at the same molar ratio used for the GTPase assay. e , Protein kinase activity assay. LRRK2-mediated phosphorylation of recombinant Rab8 (upper), and autophosphorylation of LRRK2 (middle), were analyzed by Phos-tag gels using an anti-Rab8 or an anti-LRRK2 phospho-specific (pT1357) antibody, respectively. Coomassie Blue stained gels of LRRK2 samples used for the assay are shown at the bottom of the figure. Figure Legend Snippet: Prc and NlpI are involved in the negative regulation of MepH levels. (A) Comparison of DD-endopeptidase levels in the ΔmepS ΔmepM , ΔmepS ΔmepM Δprc, and ΔmepS ΔmepM ΔnlpI strains. The ΔmepS ΔmepM strains with DD-endopeptidase tagged with 3X FLAG and their Δprc and ΔnlpI derivatives were grown overnight in M9 glucose lacking casamino acids. The cells were washed and diluted in LB to an OD600 of 0.05. When the cultures reached an OD 600 of 0.5, cells were harvested by centrifugation, resuspended in Laemmli buffer, and used for immunoblotting. (B,C) In vivo degradation assay of MepH-Flag. WJ309 ( ΔmepS ΔmepM mepH-FLAG ), WJ199 ( ΔmepS ΔmepM Δprc mepH-FLAG ), and WJ200 ( ΔmepS ΔmepM ΔnlpI mepH-FLAG ) were grown to an OD 600 of 0.5 in LB, as described in (A) . Spectinomycin was added to each culture to a final concentration of 500 μg/ml to block protein synthesis and aliquots were collected at the indicated time points for immunoblotting. The anti-FLAG signal of each sample was normalized to the anti-RpoA signal. Each experiment was performed in triplicates and the representative images are shown. (C) The normalized signal at the time of spectinomycin addition was set as 1 and the change in signal intensity at each time point was plotted for each strain. Error bars represent the standard deviation from triplicate measurements. Figure Legend Snippet: Immunocytochemistry of hTAS1R2-inducible HEK293S cells treated with tetracycline and NaBu. Cells from clone 7 were treated with 1 µg/mL tetracycline and 5 mM NaBu for 48 h. The level of induced hTAS1R2 protein (shown in green) was detected using a primary anti-FLAG M2 antibody and a fluorescently labelled secondary antibody (Alexa Fluor 488). The cell surface (shown in red) was detected by biotin-conjugated concanavalin A and streptavidin-conjugated Alexa Fluor 568. The overlay images indicate the localization of the receptor at the cell surface (shown in yellow). ( A ) The cells were analysed using an epi-fluorescence inverted microscope (Eclipse TiE, Nikon, Champigny sur Marne, France) equipped with an ×20 objective lens and a LucaR EMCCD camera (Andor Technology, Belfast, UK). ( B ) The cells were analysed using a two photon confocal microscope (Nikon A1-MP) equipped with an ×60 objective lens (DImaCell platform, University of Burgundy, Dijon, France). 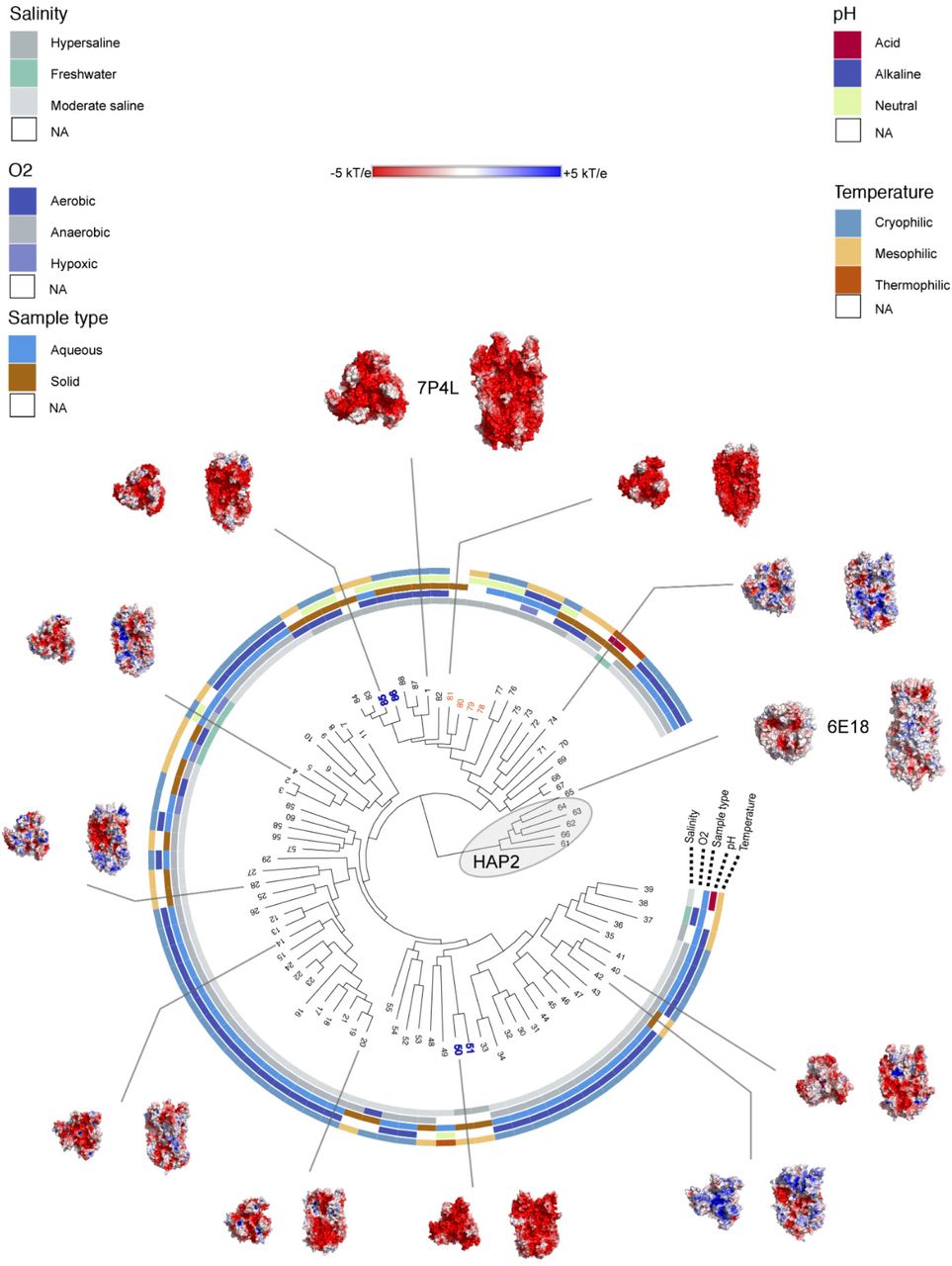