Figure Lengend Snippet: Transcription at CpG85. A) Expression of the transcript is elevated towards the 3’-end of CpG85. Quantitative RT-PCR with primer / probe assays (localization is shown in Figure 3B top) demonstrates significantly higher expression at the more 3’-end of CpG85. For comparison, expression of Rb1 is shown as measured with assays at exons 4/6 and exons 18/19. Analysis was conducted in six independent clones in two biological and two technical replicates, respectively. Expression levels are normalized to the level of β-actin. The p-value was calculated using the Welch two-sample test. B) RNA polymerase II (RNAPII) is enriched at the 3’ end of CpG85. Presence of initiating and elongating RNAPII at the Rb1 and CpG85 promoters was tested for by ChIP. Top: schemes showing localization of primer / probe assays for qPCR over the Rb1 promoter (three assays) and CpG85 (four assays), as well as the mapped transcriptional start sites in CpG85. Results are depicted as % input and the non-related antibody (against PML protein) control is shown in black. Both types of RNAPII could be found at both promoters. Three independent experiments are shown, one in cells with genotype SNV_ PPP1R26P1 /wt and two in independent clones of genotype SNV / PPP1R26P1 .

Article Snippet: PPP1R26P1 was generated by using the Phusion Flash high-fidelity PCR master mix () using BAC RPCIB753O20259Q (obtained from imaGenes) as template and introducing SwaI restriction sites for cloning into pACYC_D4_ECR and the introduction of the neomycin selection cassette. Figure Lengend Snippet: Targeting human PPP1R26P1 into mouse Rb1 intron 2. A) Top: structure of the human PPP1R26 gene on chromosome 9, consisting of four exons; non-coding sequences are indicated by lower box height. Four small CpG islands are represented by black lines below exon 4. Middle: mRNA structure of PPP1R26 . Below: scheme of exons 1 to 3 (black vertical boxes) of the human RB1 locus on chromosome 13. Integration of PPP1R26P1 in intron 2 of RB1 occurred in inverted orientation and skipping part of exon 1 of the PPP1R26 mRNA. The pseudogene has two larger CpG islands, CpG42 and CpG85, their methylation status is indicated by circles: filled – methylated, open – not methylated. Expression of RB1 is skewed in favor of the maternal allele indicated by a thicker arrow. The new exon 2B is shown as white box in PPP1R26P1 , it splices onto exon 3 of RB1 . The light gray boxes in intron 2 indicate ECRs A and B. B) Generation of modified ES cells. The order of targeting experiments is shown, indicating the number and designations of clones analyzed. Above the arrows the type of experiment is given: SNV or PPP1R26P1 construct: introduction of targeting vectors; PFGE: analysis of phasing of the two targeting events; Cre: removal of selection cassette by Cre expression. C) The targeting strategy in murine ES cells. Top: wild type mouse Rb1 locus on chromosome 14 is shown from exon 1 to 5 (black boxes), also showing the positions of ECRs A and B (grey boxes). Below: constructs used to introduce the SNV (indicated by P for the newly generated PstI restriction site) into exon 3 of Rb1 (SNV targeting vector) and to introduce human PPP1R26P1 (gray dotted box, positions of CpG42 and CpG85 shown as black lines) into intron 2 of Rb1 ( PPP1R26P1 targeting vector). The homology region of the latter was amplified by PCR, primers are indicated as black arrows. Both contracts contained a neomycin selection cassette (striped box) flanked by either loxP (white triangles) or loxP511 (black triangles) sites, respectively. Restriction enzymes: B: BamHI, E: EcoRI, H: HindIII, Hc: HincII, P: PstI, Sw: SwaI, X: XcmI. Southern blot probes are indicated in the top scheme as black lines and labeled. The two possible genomic combinations of targeted alleles are depicted in the lower panel: genotype SNV_ PPP1R26P1 /wt, having both targeting events and the same allele or genotype SNV / PPP1R26P1 with the two targeting events on different alleles. D) Southern blot analysis of targeted clones carrying the SNV in exon 3 of Rb1 . Probe SNP 5’ ext hybridized to HincII-digested genomic DNA shows an 8 kb fragment for the targeted allele in Rb1 _SNVneo and a 12 kb band for the targeted allele after selection cassette removal in Rb1 _SNV clones. E) Southern blot analysis for targeting of PPP1R26P1 into intron 2 of Rb1 . Probe KIAA 5’ ext hybridized to HincII-digested genomic DNA identifies a 4 kb fragment for the targeted allele in the SNV_ PPP1R26P1 neo clone and a 10kb fragment in SNV_ PPP1R26P1 clones after removal of the selection cassette. F) Southern blot analysis of PFGE to determine phasing of the two targeting events. Probe KIAA 5’ ext was hybridised to EcoRV-digested DNA to identify either a 23 kb and a 27 kb band in clones having genotype SNV_ PPP1R26P1 neo/wt (both events on one allele) or a 20kb and a 30kb fragment in clones with genotype SNV / PPP1R26P1 neo with the two events occurred on different alleles.

Article Snippet: PPP1R26P1 was generated by using the Phusion Flash high-fidelity PCR master mix () using BAC RPCIB753O20259Q (obtained from imaGenes) as template and introducing SwaI restriction sites for cloning into pACYC_D4_ECR and the introduction of the neomycin selection cassette. 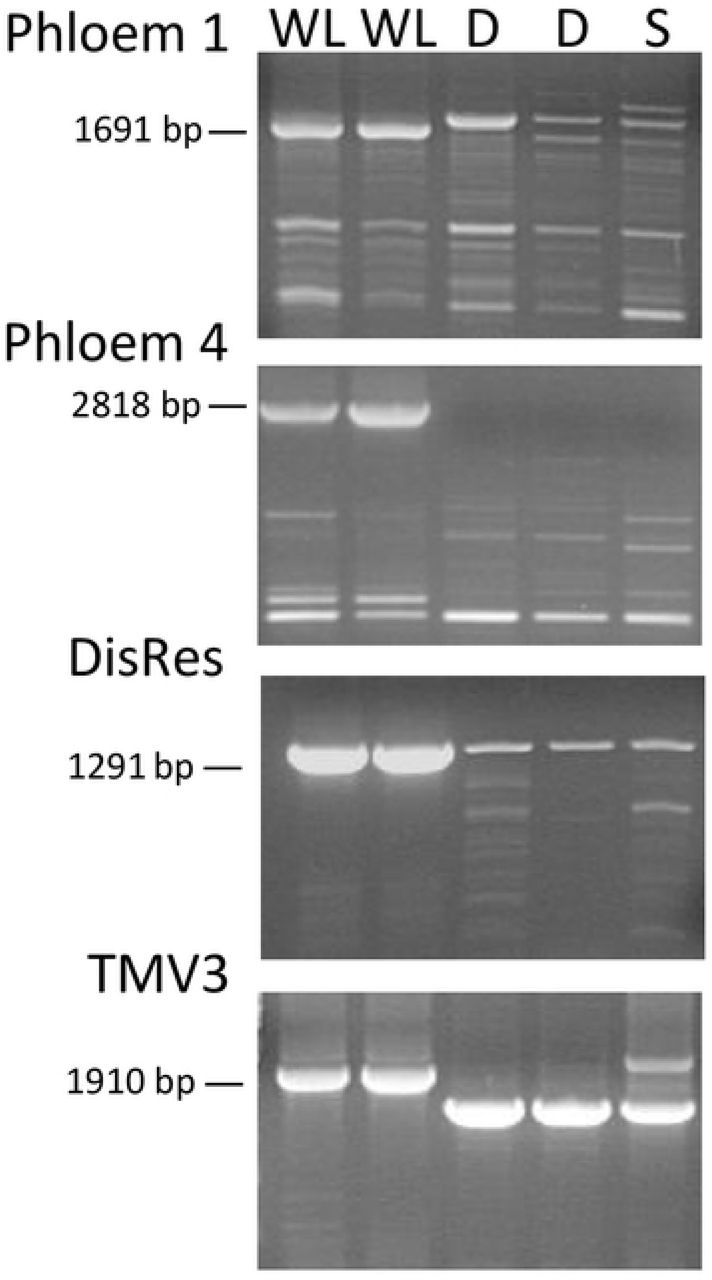 Article Title: A Large Deletion in the NSDHL Gene in Labrador Retrievers with a Congenital Cornification Disorder

Figure Lengend Snippet: Confirmation of the deletion by PCR. (A) A PCR with the three primers NSDHL_F1, NSDHL_R1 and NSDHL_R2 was performed to genotype cases and controls by fragment length analysis. The exon and intron sizes of the canine NSDHL gene are not drawn to scale. The protein-coding region is indicated by solid filling of the exons. Note that the number of 5′-untranslated exons varies between species and transcript isoforms, whereas the seven protein-coding 3′-exons are highly conserved between human, mouse, and dog. (B) A control dog homozygous for the wildtype allele showed only a single band of 753 bp generated by amplification with the primers NSDHL_F and NSDHL_R2. The two cases heterozygous for the deletion showed the wildtype band, and an additional 1166 bp band that resulted from the amplification of NSDHL_F and NSDHL_R1 on the deletion allele. The primers NSDHL_F and NSDHL_R1 did not amplify any specific product on the wildtype allele as their binding sites were > 15 kb apart.

Article Snippet: PCR, fragment length analysis, and Sanger sequencing To confirm the presence of the large heterozygous deletion in the two affected dogs, and its absence in the nonaffected control dogs, we performed a using the three primers NSDHL_F: TGCCATGAACATCTGGAGAG, NSDHL_R1: ACCCCAAACAACGAATCCT, NSDHL_R2: ACAGCTTCCCCTGCTAAGGT, and SequalPrep long range polymerase (). Figure Lengend Snippet: Bacterial taxonomic composition of nasopharyngeal samples in cases and controls. (A) Graphs show the mean proportion of the most frequent bacterial genera as inferred by PCR amplification and pyrosequencing of the 16S rRNA gene. The mean proportions were calculated based on 1,000 sequences per sample. Those bacteria at a proportion lower than 1% are indicated as “Others” and were particularly abundant in cases. (B) Shows a description of those low-frequency bacteria in patients with IPD, which include many oral organisms (bacteria at a proportion