Figure Legend Snippet: Autophagosome and lysosome fusion analysis and LC3 turnover assay in vitro . A , Western blot analysis of LC3 and the difference in the LC3-II levels between samples with and without bafilomycin A1 ( Baf A1 ), leupeptin ( LEU ), and chloroquine ( CQ ) was compared Figure Legend Snippet: Selective redistribution of newly synthesized MHC class II molecules to lysosomes in leupeptin-treated cells analyzed by Percoll gradient centrifugation. ( A ) Leupeptin does not affect the density of compartments containing β-hexosaminidase and Tfn-HRP, markers of lysosomes and endosomes, respectively. After a 3-h incubation with or without 2 mM leupeptin, cells were permitted to internalize Tfn coupled to HRP for 30 min at 37°C (in the presence or absence of leupeptin) before homogenization and fractionation on Percoll density gradients. The β-hexosaminidase and HRP activities were determined in individual fractions. High density fractions (bottom of the gradient) contained most of the β-hexosaminidase activity, while Tfn-HRP was mainly present in low density fractions. No difference was observed between leupeptin-treated and control cells. ( B ) Redistribution of newly synthesized MHC class II molecules into high density fractions in leupeptin-treated cells. After a pulse of [ 35 S]methionine and a 1-, 2-, or 4-h chase in the absence ( left ) or presence ( right ) of leupeptin, I-A b –expressing A20 cells were fractionated on Percoll gradients. The membranes in each of the gradient fractions were pelleted by centrifugation, lysed in Triton X-100, and then immunoprecipitated using mAbs to I-A b (Y3P). The samples were analyzed by SDS-PAGE, and bands corresponding to class II β chains were quantified by phosphorimaging and optical densitometry. Ii-p10 intensity was also quantified after the 4-h chase in the presence of leupeptin ( bottom left ). Leupeptin caused a strong redistribution of class II into high density fractions. The majority of Ii-p10 was also found in lysosome-containing fractions. As expected, Ii-p10 was barely detectable in control cells and thus was not shown. Figure Legend Snippet: Reversal of the leupeptin block results in MHC class II transport from lysosomes to the cell surface. ( A ) Reversibility of the effect of leupeptin on the intracellular retention of I-A b class II molecules. Cells were metabolically labeled for 20 min, and then chased in the continous presence of leupeptin for 4 h. Leupeptin was then removed, and the cells were incubated for 0–24 h. After cell surface biotinylation, the cells were lysed, and total ( left ) or surface ( right ) I-A b molecules were immunoprecipitated sequentially. Upon removal of leupeptin, the total amount of p70 (the Ii-p10–αβ complex) slowly decreased, while the amount of peptide-loaded, SDS-stable compact dimers (“ C ”) increased. Ii-p10 completely disappeared over this time course. After a lag (see B ), compact dimers began to appear at the cell surface. ( B ) Kinetics of compact dimer formation and transport to the cell surface. Bands corresponding to total and surface compact dimers were quantified by phosphorimaging. The lag between formation of compact dimers and their subsequent appearance at the cell surface was 3–4 h. Figure Legend Snippet: Intracellular retention of Ii-p10–associated class II molecules. Cells were pulsed for 20 min and chased for the indicated times (h) in the presence or absence of 2 mM leupeptin. At each time point, the cells were surface biotinylated before lysis. Total and cell surface biotinylated class II molecules were sequentially immunoprecipitated using the mAb Y3P and streptavidin-agarose. The samples were then analyzed by SDS-PAGE without boiling before electrophoresis. In untreated control cells ( top ), peptideloaded, 60-kD compact αβ dimers (“ C ”) began to appear both in total lysates and on the surface after 0.5 h of chase. A small amount of the p70 complex of Ii-p10–αβ dimers appeared transiently, beginning also at 0.5 h of chase. In leupeptin-treated cells ( bottom ), p70 began to accumulate in total lysates by 0.5 h, but little was recovered at the plasma membrane. Peptide-loaded compact dimers only began to appear after 2–4 h of chase both in lysates and at the cell surface. Figure Legend Snippet: Leupeptin induces an accumulation of SDS- resistant I-A b Ii-p10 complexes. ( A ) Leupeptin induces the accumulation of 10-kD (Ii-p10) and 70-kD (p70) proteins that coprecipitate with I-A b . I-A b –expressing A20 cells were pulsed for 20 min with [ 35 S]methionine and chased at 37°C for the indicated times in the presence or absence of 2 mM leupeptin. After lysis, the I-A b molecules were immunoprecipitated using the Y3P mAb. The samples were not boiled before SDS-PAGE. Labeled class II molecules were not detected before 30 min of chase because the Y3P mAb used for immunoprecipitation does not detect immature αβ dimers complexed with intact Ii chain. ( B ) p70 represents SDS-stable complexes containing class II α and β chains and a 10-kD protein. After a 20-min pulse and 4-h chase with or without 2 mM leupeptin (lanes Lp and C , respectively), class II molecules were immunoprecipitated using the Y3P mAb, and the samples were boiled ( B ) or not boiled ( NB ) before SDSPAGE. After boiling, p70 dissociated quantitatively into monomers corresponding to αβ and Ii-p10. ( C ) p70 represents SDS-stable I-A b αβ–Ii-p10 complexes. After a 20-min pulse and 4-h chase in the presence of leupeptin, class II molecules were immunoprecipitated with either anti–I-A b (Y3P) or anti–Ii chain cytoplasmic domain (IN-1) mAbs. While both antibodies precipitated the p70 complex, only anti–class II mAb precipitated the 60-kD SDS-stable compact dimer. Thus, p70 but not compact dimers are complexed with Ii chain or Ii chain fragments (i.e., Ii-p10) that contain the Ii chain cytoplasmic domain. ( D ) Kinetics of association between Ii-p10 and I-A b or I-A d . Pulse-chase experiments were performed as above using A20 cells expressing only I-A d or expressing both I-A d and I-A b . I-A d or I-A b –containing complexes were then immunoprecipitated using specific mAbs (Y3P and MKD6, respectively), and the amounts of Ii-p10 associated to the class II molecules were quantified by phosphorimaging. The association of Ii-p10 with I-A b persisted throughout the chase period, while Ii-p10–I-A d complexes appeared only transiently. Figure Legend Snippet: Autophagy activity is induced in mouse kidneys after cigarette smoke exposure. ( A ) Scheme representing autophagic flux experiment in which leupeptin or bafilomycin A1 inhibits autophagosome degradation, leading to autophagosome accumulation. ( B ) Mice subjected to RA or CS for 2 months (left panel) or 6 months (right panel) were assayed for autophagic flux in vivo by injection with leupeptin or vehicle (PBS), followed by Western blotting for LC3B expression in kidney tissue after 2 and 6 months of exposure and Beclin-1 expression after 6 months of exposure. Dot plots represent quantitation of Western blots ( n = 3 per group, except for 6 months CS + leupeptin exposure, n = 2 per group). ( C ) HK-2 cells were exposed to CSE in the absence or presence of bafilomycin A1. Representative Western blot of Beclin-1 and LC3B expression to determine autophagic flux in vitro. Dot plots represent quantitation of 3 independent experiments. All data are mean ± SEM.* P 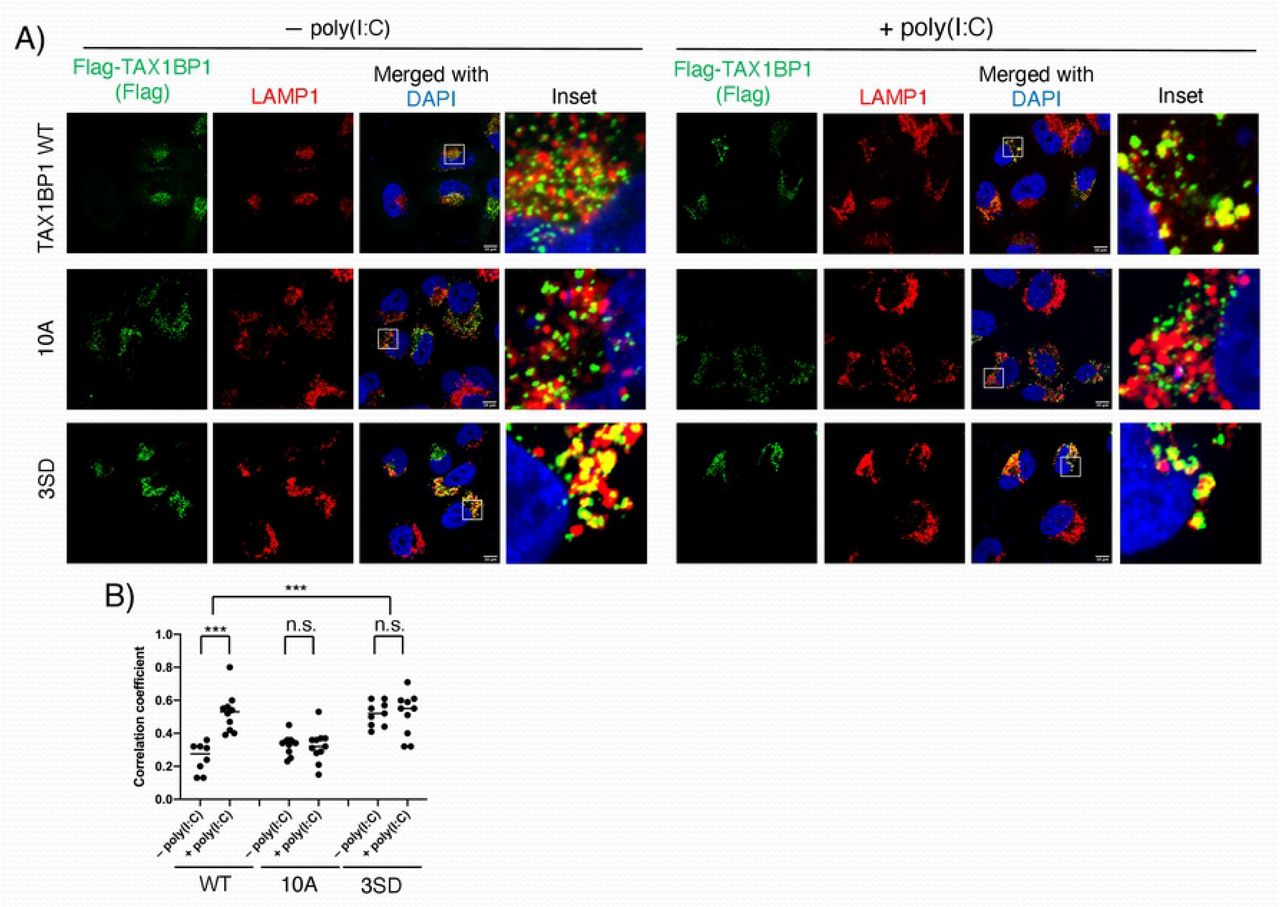 Figure Lengend Snippet: Phosphorylation of TAX1BP1 is required for localization to autolysosomes. (A) Immunofluorescence assays. TAX1BP1 KO HeLa cells were transfected with Flag-TAX1BP1 WT, 10A or 3SD (S254D, S593D and S666D) and 24 h later transfected with 2.5 μg/ml poly(I:C) for 6 h in the presence of 20 μM leupeptin. Scale bar, 10 μm. (B) Pearson’s correlation coefficient was calculated to measure co-localization between TAX1BP1 and LAMP1 in 8-12 cells randomly selected from each sample. Unpaired Student’s t -test, *** P

Article Snippet: ReagentsPoly(I:C), Bafilomycin A1, IKK inhibitor VII, and were purchased from . λ-phosphatase was from New England Biolabs. Article Snippet: The cathepsin B inhibitors, and CA-074, were obtained from and MedChem Express, respectively. Article Title: Activation of pro-survival metabolic networks by 1,25(OH)2D3 does not hamper the sensitivity of breast cancer cells to chemotherapeutics