Figure Lengend Snippet: Thin layer chromatography and GC-MS study of fungal ME, and its effect in reduction of the phenoloxidase inside the anopheline larvae. ( a ) Spots of the MF8 of T. asperellum (TaspSKGN2) in TLC plates under UV (254 nm 366 nm) and within an iodine vapor chamber. ( Rf value: 0.83) [i. Spot under UV at 254 nm ii. Spot under UV at 366 nm iii. Spot within Iodine vapour chamber]. ( b ) GC-MS chromatogram of the MF8 of T. asperellum ME extracts exhibiting peaks of 49 compounds. ( c ) Graphical representation of the reduction in phenoloxidase activity after the initial increase inside the anopheline larvae (N = 10) treated with the LD 50 dose of ME of T. asperellum in different interaction times. Figure Lengend Snippet: Cellular respiration in neurons over-expressing PGC-1α. ( A – D ) Primary neuronal cultures were infected with either the NCV or the PGC1 vector at day 7. Analysis of cellular respiration was performed at 5 (A) and 7 (C) days post-infection. OCRs were measured on 10 wells per group in basal conditions during 60 min. In each group, a subset of four wells was then treated with 5 µ m oligomycin (ATP synthase inhibitor) and OCR was measured during 60 min. Finally, another subset of five wells per group was exposed to 20 µ m FCCP (mitochondrial protonophore) and the OCR was measured during 30 min. (B and D) Based on these measurements, we assessed the following OCRs: basal ( n = 10), dedicated to ATP production ( n = 4), in presence of FCCP ( n = 5) and reserve capacity ( n = 5). Student's t -test: ** P Figure Lengend Snippet: Loss of dopaminergic nigrostriatal markers in response to PGC-1α overexpression. ( A and B ) Loss of VMAT2-positive (A) and TH-positive (B) neurons in the SNpc of rats displaying either a moderate (PGC1 Lo) or a high level of PGC-1α overexpression (PGC1 Hi) in the SNpc at 3 months post-injection. Note the overt loss of VMAT2 and TH neurons in the PGC1 Hi condition. ( C and D ) Loss of striatal VMAT2 (C) and TH (D) immunoreactivity in PGC1 Lo and PGC1 Hi rats at 3 months post-injection. Note in both conditions, the loss of striatal dopaminergic markers. ( E and F ) Representative photomicrographs showing VMAT2-positive neurons in the SNpc of PGC1 Hi rats (E) and PGC1 Lo rats (F), when compared with the non-injected side (NInjS); scale bar: 100 µm. ( G and I ) Representative photomicrographs showing the loss of VMAT2 marker in the striatum of PGC1 Hi (G) and PGC1 Lo rats (I). In both conditions, striatal DARPP32 immunoreactivity remains intact ( H and J —corresponding to PGC1 Hi and PGC1 Lo, respectively). ( K ) Stereological quantification of the percentage loss of Nissl-positive neurons in the SNpc. Figure Lengend Snippet: Loss of dopaminergic markers and behavioral assessment in response to PGC-1α overexpression in rats expressing human αSyn. Rats were injected in the SNpc with AAV2/6 vectors encoding either human αSynWT or the A53T mutant. The animals were simultaneously injected in the striatum with an AAV2/6 vector encoding PGC-1α or a NCV to ensure a moderate expression in the SNpc. ( A – C ) To assess motor asymmetry, forepaw activity was measured in the cylinder test (A and B) and ipsiversive rotations were measured following amphetamine administration (C). In the cylinder test, note the progressive development of an asymmetry in forepaw use typically observed following unilateral expression of αSynWT or A53T (repeated measure ANOVA, time effect: P Figure Lengend Snippet: Absence of fluorogold retrograde labeling in nigral dopaminergic neurons overexpressing PGC-1α. Immunostaining for TH expression and fluorogold uptake at 3 months post-injection of either PGC-1α or non-coding vector. Note the absence of fluorogold signal in the SNpc of PGC1 Lo rats, indicative of impaired uptake or retrograde transport of the tracer. PGC1 and NCV Lo; scale bar: 100 μm. 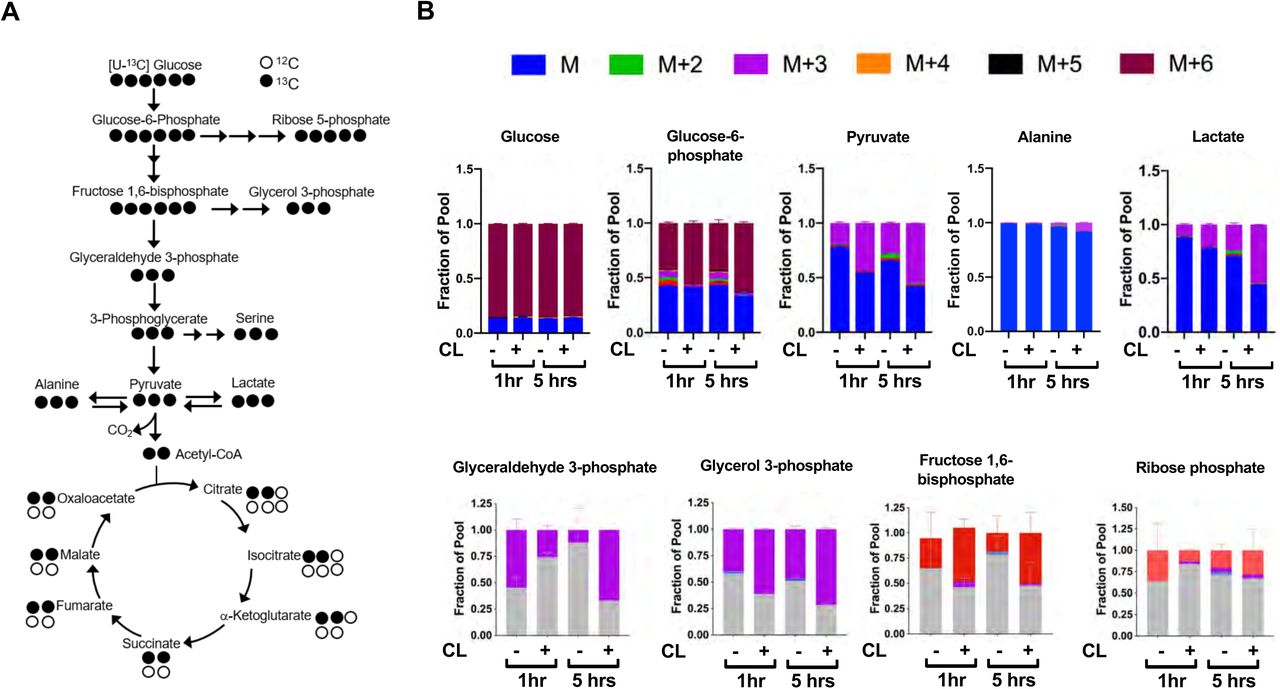 Figure Lengend Snippet: Transcriptome and metabolomics analysis of brown fat shows increased carbohydrate metabolism during cold exposure. (a) Atom mapping for [U- 13 C]glucose tracing into glycolysis and the TCA cycle. White balls are 12 C atoms. Black balls are 13 C atoms. (b) Tracing analysis from U- 13 C glucose in differentiated brown adipocytes treated with vehicle or 100nM CL-316,243 for 5 hours (N=3). 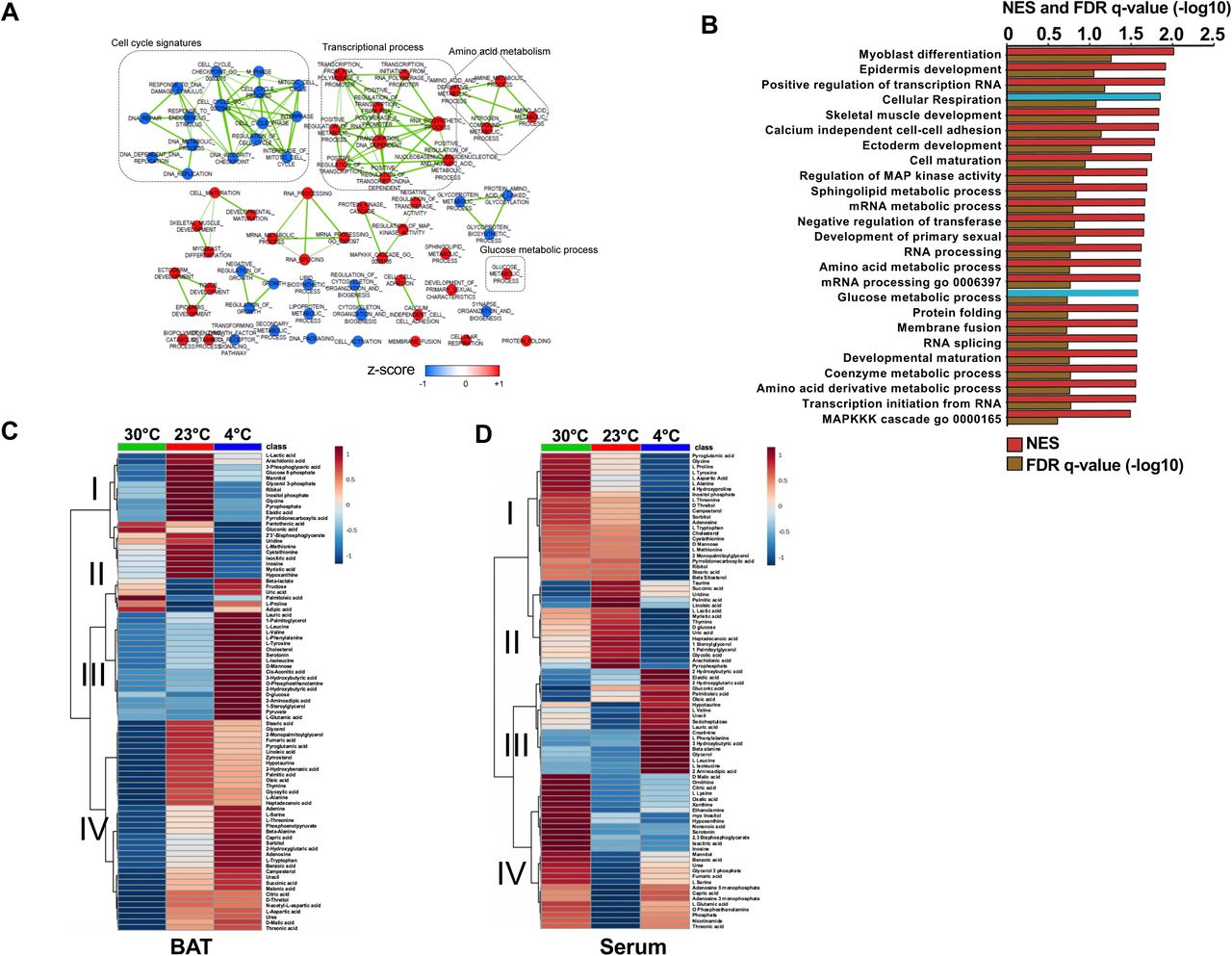