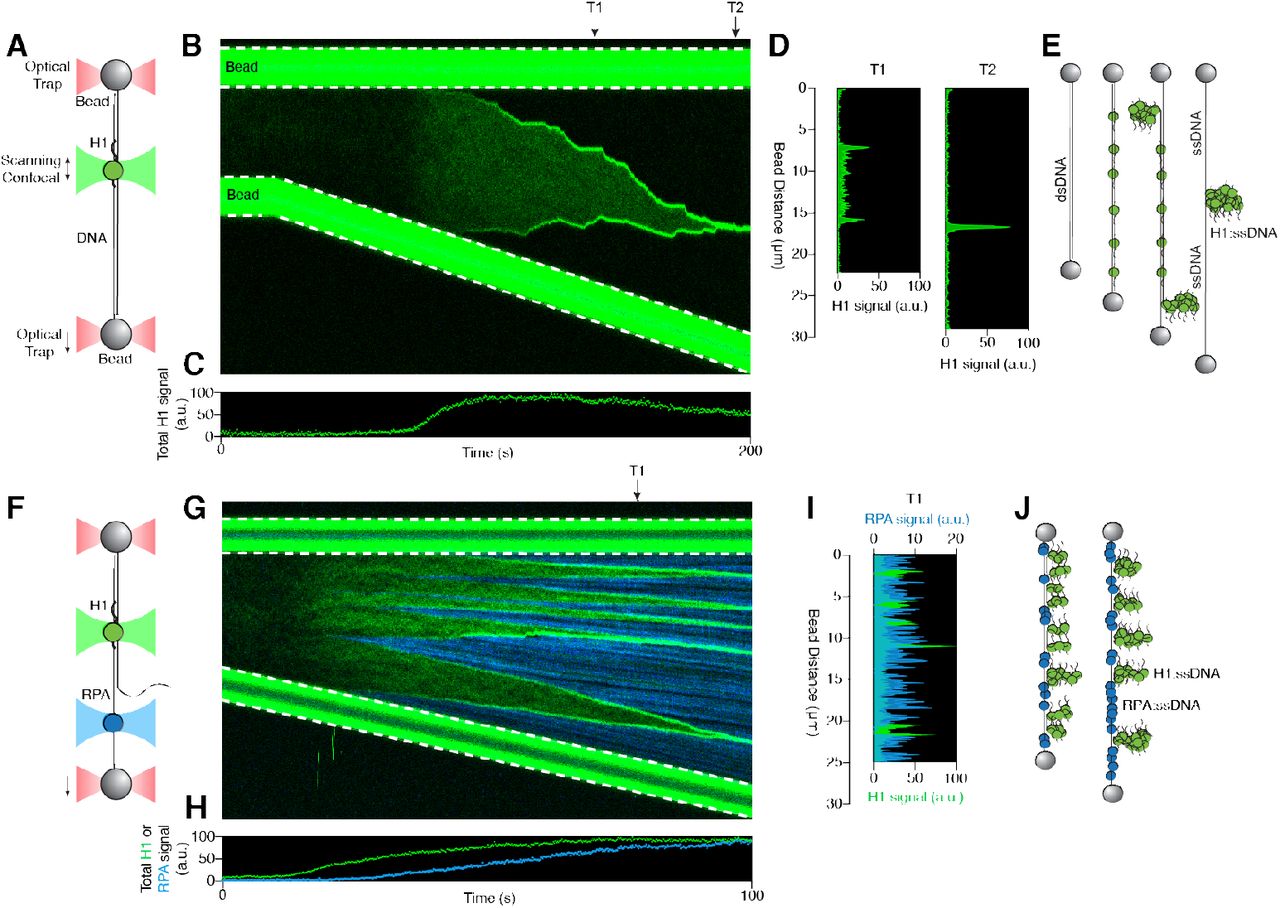 Figure Legend Snippet: CMG Undergoes Directional Translocation on ssDNA (A) Schematic of the experimental setup. Individual DNA tethers were formed in channels 1–3 separated by laminar flow containing streptavidin-coated beads, biotinylated λ-DNA, and buffer, respectively. They were subsequently moved to orthogonal channels 4 and 5 for protein loading and imaging. The illustration in the zoom-in box was not drawn to scale. (B) (Left) Cartoon and 2D scan of a tethered ssDNA loaded with multiple Cy3-CMGs. (Right) Representative kymographs of CMG movement in the presence of 1 mM ATP and 10 nM Mcm10 under 5 pN of tension. (C) Representative kymographs of Cy3-CMG (green) on ssDNA in the presence of Mcm10 but without ATP. (D) Distribution of CMG translocation rates on ssDNA in the absence (red) and presence (blue) of ATP ( n = 40 and 62, respectively). . Figure Lengend Snippet: Schematic diagram of random shRNA library construction. (A) Backbone of oligonucleotide used for generation of shRNA library. (B.1–2) First, the 120 bp oligonucleotide containing 20 bp of the 3′ end of U6 including a “G” to initiate transcription, 18 random nucleotides (sense) and a stem-loop structure that can act as a primer for synthesizing the strand complementary to the random 18 bp (anti-sense) was extended using T4 DNA polymerase in the presence of a blocking primer which annealed to the U6 promoter region. (B.3–4) Following purification of the extended oligonucleotide, a poly-thymidine tract was added using terminal transferase (TdT). (B.5) Exo - klenow fragment was used to make the oligonucleotide double stranded using a poly-A oligonucleotide as a primer. (B.6) The purified double stranded DNA was amplified using uracil containing primers. (B.7) The PCR product was digested with USER enzyme to generate overhangs to facilitate cloning. (B.8) The PCR fragment was cloned into the lentiviral vector pLL3.7, and digested with BpmI to remove the extra sequence between the random sense and antisense sequence, leaving a 9 base pair loop sequence.

Article Snippet: Step 5 The resulting oligonucleotide was purified using urea polyacrylamide gel electrophoresis and used as a template to generate double stranded DNA using () and the primer, dsHP ( AGCUATAGTTTAGCGGCCGCTTATACTACTCAAAAAAAAAAAAAAAAAA ) according the manufacturer's instructions.

Article Snippet: DNA preparationTo create a terminally biotinylated dsDNA template, the 12-base 5’ overhang on each end of genomic DNA from bacteriophage λ (48,502 bp; Roche) was filled in with a mixture of natural and biotinylated nucleotides by the I Klenow fragment ().