Figure Legend Snippet: Endo III blocks XerC-catalysis on pseudo-HJ and displaces it from them. ( A ) Scheme of the suicide pseudo-HJ indicating the mismatch engineered to slow down re-ligation after XerC-cleavage. KMnO 4 sensitive residues in the XerC- and XerD-binding att P(+) arms are indicated by a star. ( B ) Resolution of att P(+)/ dif suicide pseudo-HJs. Legend as in Figure 4D . ( C ) DNase I protection and ( D ) KMnO 4 sensitivity assays of the att P(+)/ dif 1 pseudo-HJ substrate. The analysed strand was labelled on its 5′ end. A scheme of the analysed strand is drawn on the left of the gels. KMnO 4 sensitive residues in the XerC- and XerD-binding sites are indicated by a star. Figure Legend Snippet: Representative Bioanalyzer electropherograms after initial RNA extractions. High quality RNA (RIN > 7.0) can be extracted from all three methods. PAXGENE however requires a DNase step as traces from initial extractions show genomic DNA contamination at high molecular weights and as a “shoulder” to the 28S peak (indicated by asterisks). Good quality RNA can be detected after globin depletion with both TEM and PAXGENE. However, PAXGENE samples showed consistently lower concentration levels, as indicated by the smaller 18S and 28S peaks (FU, fluorescent units). Traces are representative and from single samples from each extraction method. Figure Legend Snippet: DNA can serve as a template during miRNA detection. ( A ) False positive signal of DNA derives mainly from the reverse transcription reaction. Mature miR-1226-3p was tested in the indicated samples, with or without reverse transcription (RT). On the y-axis, dC t value is represented, calculated as the Ct difference between the examined samples and the gDNA of control HeLa_mir-33b cell line (Ct = 35,9). One C t difference represents about 2× higher detected mature miRNA level. ( B ) DNA contamination remains in total RNA samples during isolation by the widely used Trizol reagent. Total RNA samples were isolated from transiently transfected HeLa cells; the transfected plasmid DNA amounts are indicated. Samples were DNase treated and non-treated, then reverse transcribed and subjected to real-time PCR. Expression values relative to U6 snRNA are shown on the y-axis. Experiments were carried out with three replicates at least from three independent experiments; one representative experiment is shown, error bars represent standard deviations. Article Title: The crystal structure of the TetR family transcriptional repressor SimR bound to DNA and the role of a flexible N-terminal extension in minor groove binding

Article Snippet: Nuclei were incubated with various concentrations of (0–1.5 units, ) for 10 minutes at 37°C. 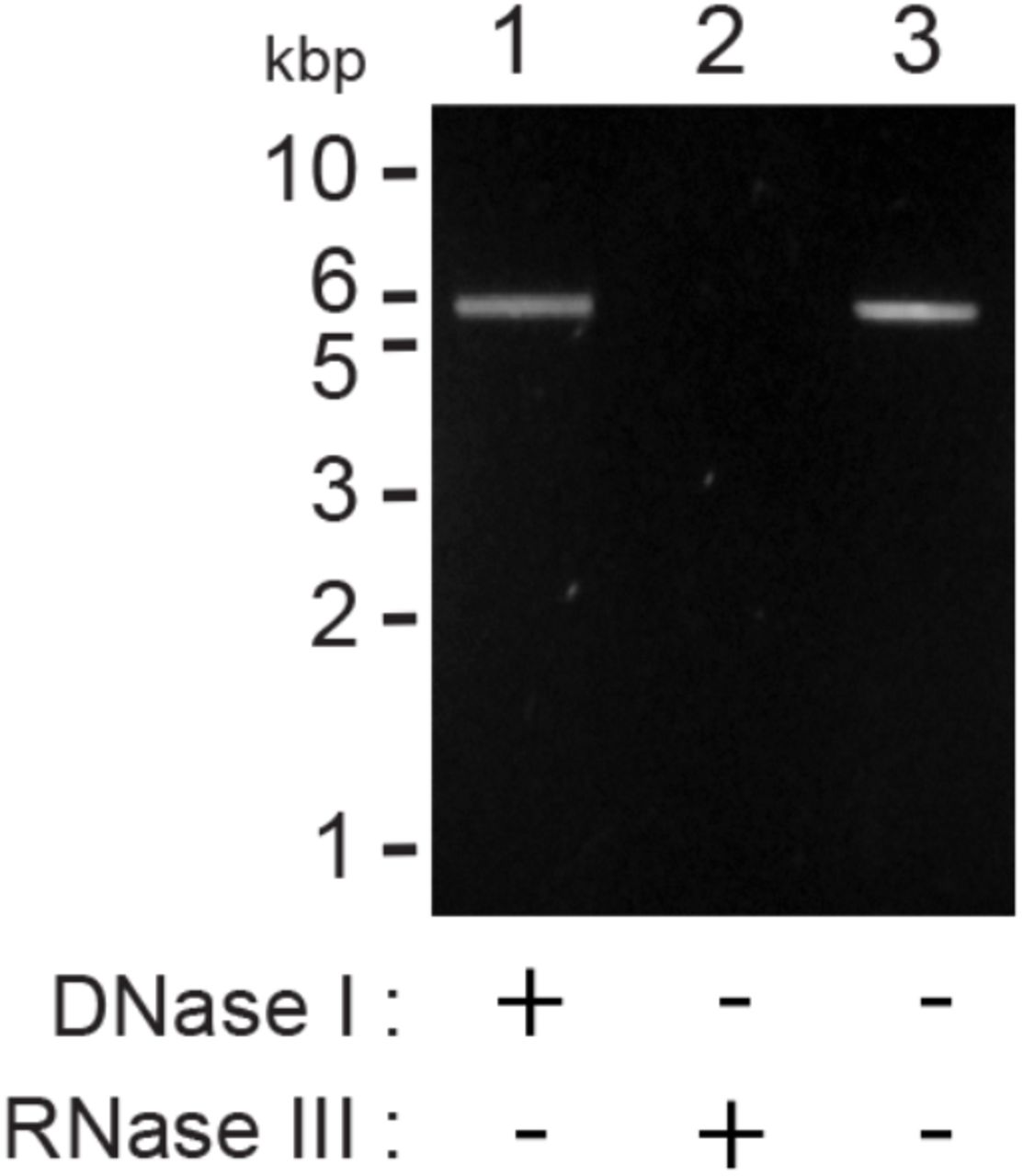 Article Snippet: () digestion was performed as directed by the manufacturer in 1X reaction buffer for 10 min at 37°C. the reaction was stopped by incubation at 75°C for 10 min. All digested products were analyzed by agarose gel electrophoresis with ethidium bromide staining. 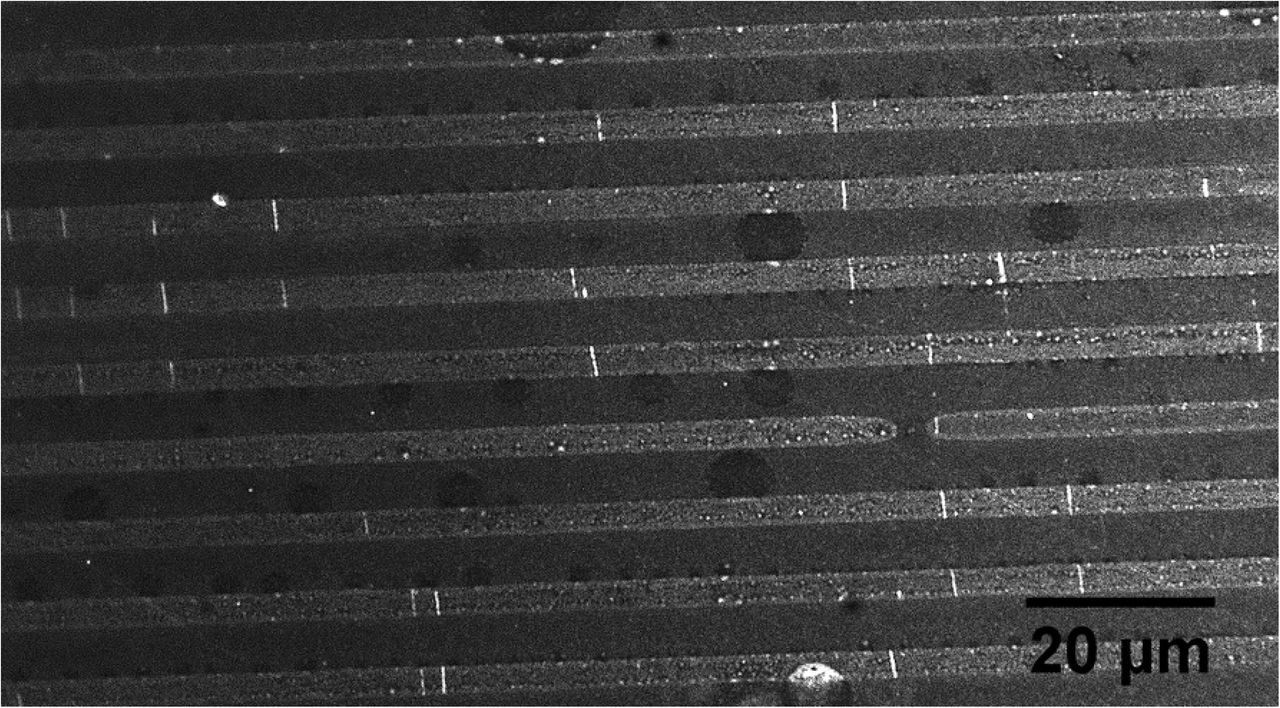 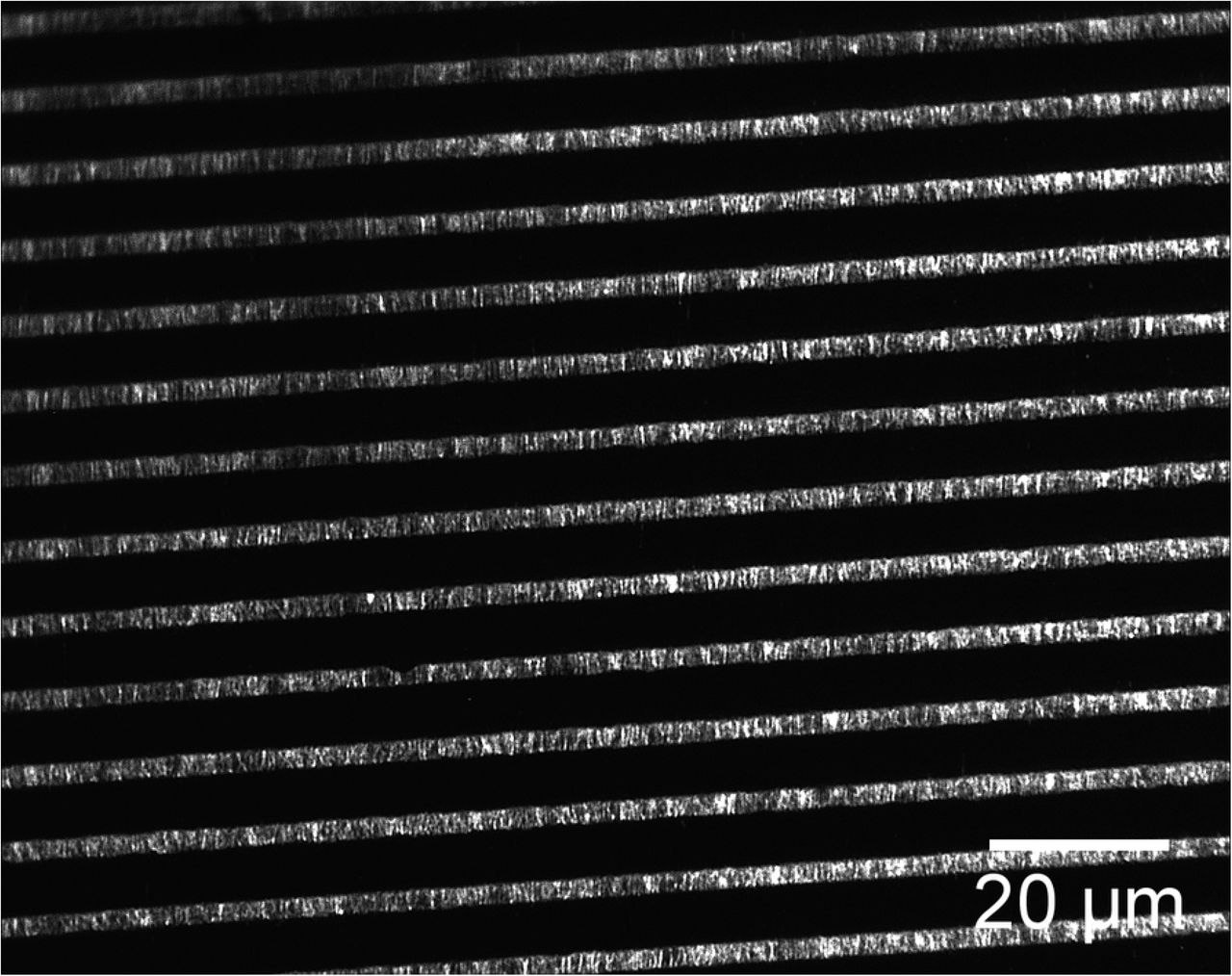 Figure Lengend Snippet: DNA (at high density) fragmented on a surface by DNase I. Distance from inlet is 8.7mm. 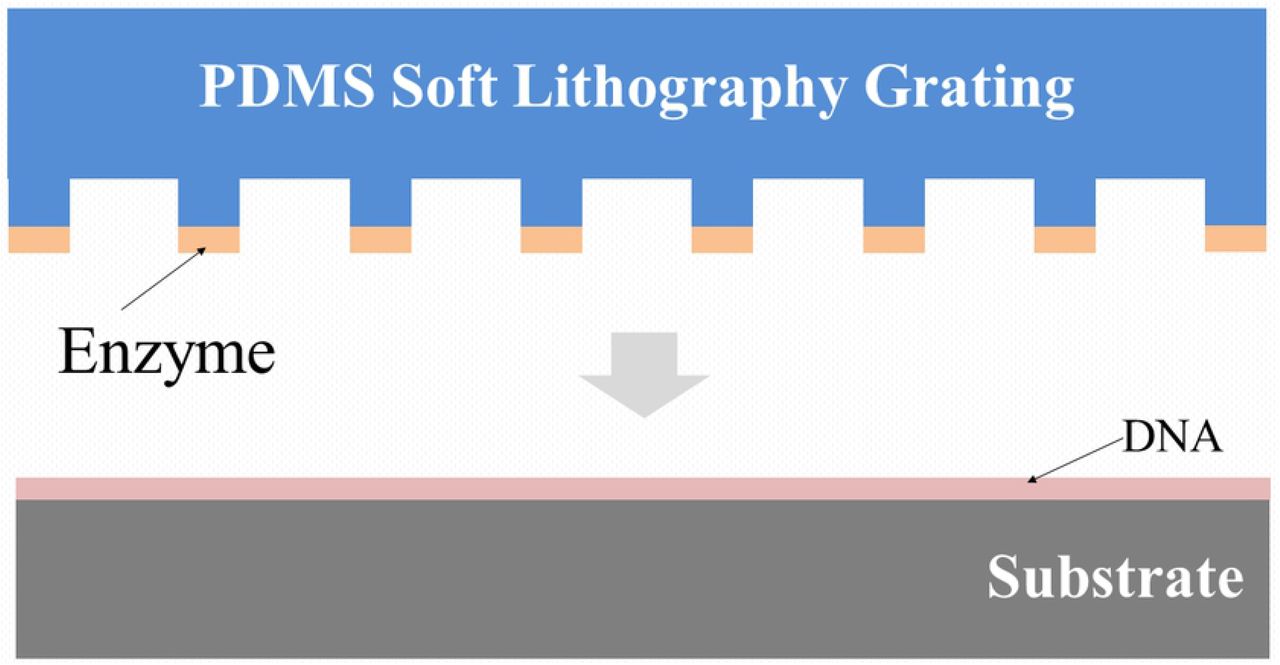 Figure Lengend Snippet: Schematic of stamping method for fragmenting surface-adsorbed. A PDMS stamp in the form of a grating is ‘inked’ with DNase I cuttting enzyme and is brought into contact with a surface on which DNA molecules have been deposited.

Figure Lengend Snippet: Fluorescence image of SyBr Gold labeled DNA. Upper left area was covered with a solution containing 0.095U/μl of DNase I in NEB DNase I Reaction Buffer and shows effective digestion of DNA in that region.