Figure Legend Snippet: Proposed model for RNAP-collision-driven bidirectional transcription termination. The RNA hairpin structure formed at the overlapping region of the bidirectional terminator induces pausing of the EC from either direction. The opposite RNAP runs into the paused RNAP, forming a stable head-on collided complex that does not efficiently dissociate by itself ( Step 1 ). When a trailing EC newly initiated from the promoter runs into the head-on collided complex, the RNAP that transcribed past the overlapping region is dislodged from the DNA along with its nascent RNA due to its lower stability induced by the RNA hairpin ( Step 2 ). The trailing EC may either transcribes the overlapping region and forms a new head-on collided complex with the remaining EC ( Step 3 , a ), or pushes its leading EC across the overlapping region and dislodges it ( Step 3 , b ). Note that the new EC illustrated here travels in the forward direction. A reciprocal scenario where the new EC travels in the reverse direction is omitted for simplicity. This model explains the predominantly uniform 3’ ends of nascent transcripts observed at the bidirectional terminators (e.g., Figure S3A and S7). 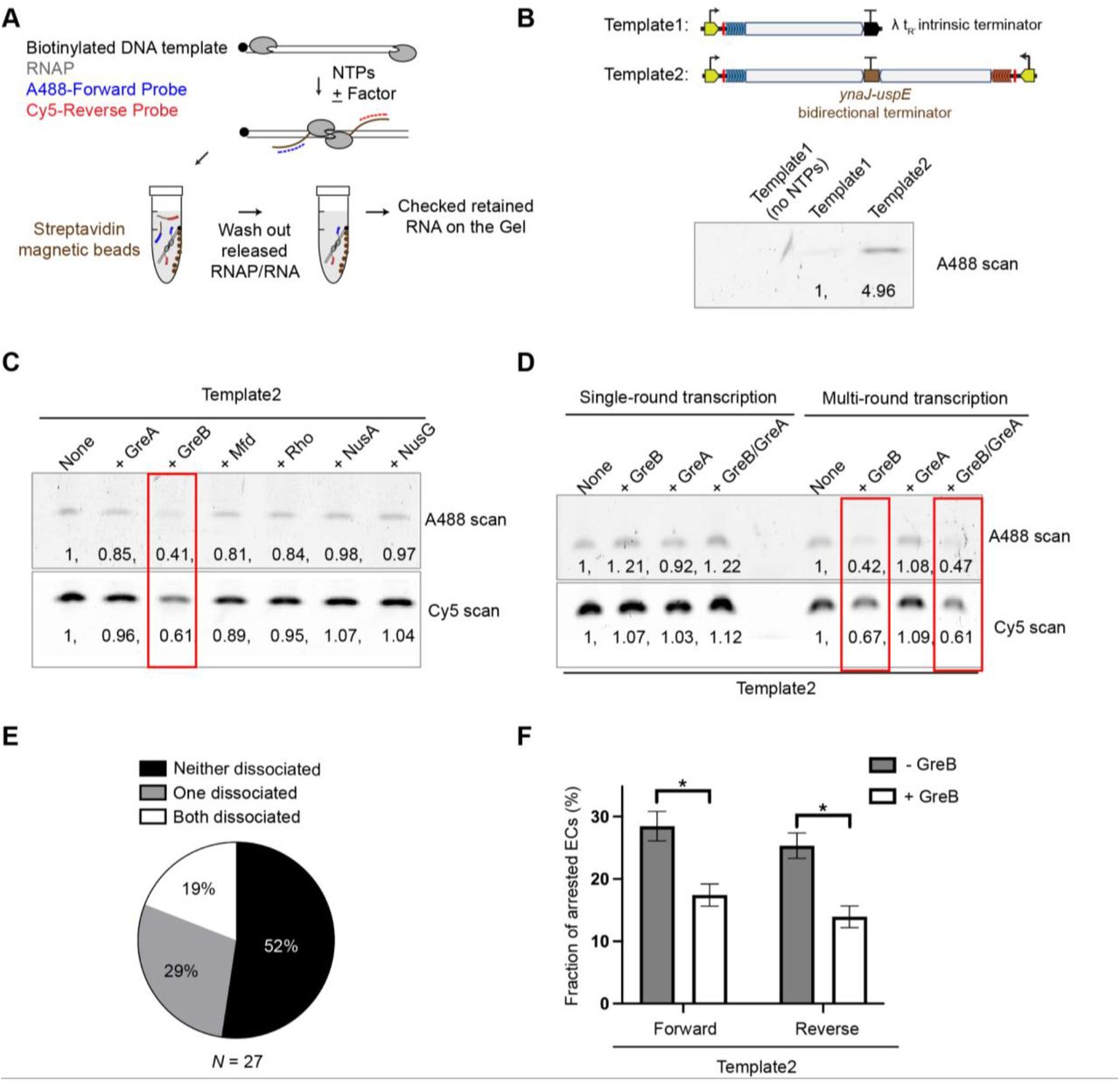 Figure Legend Snippet: Screening for factors that facilitate the dissociation of head-on collided complexes. ( A ) Experimental workflow. Briefly, in vitro transcription reactions were performed on biotinylated DNA templates in the presence of fluorescently labeled probes to detect nascent RNA. After reaction, DNA substrates were pulled down by streptavidin magnetic beads. After thoroughly washing out the released RNAP and RNA products upon termination, the amount of RNA retained on the DNA template was assessed by the probe intensity from the gel. ( B ) Gel results for the assay described in (A) using DNA substrates derived from Template1 (with an intrinsic terminator) and Template2 (with a bidirectional terminator). AlexaFluor488-labeled forward probe intensities were normalized to the Template1 value. ( C ) Gel results showing the effects of a panel of E. coli transcription factors on the amount of RNA products retained on Template2 . AlexaFluor488-labeled forward probe and Cy5-labeled reverse probe intensities were normalized to the no-factor condition. The +GreB condition (outlined in red) exhibited reduced probe intensities. ( D ) Gel results showing the effect of GreB and/or GreA on the amount of retained RNA probes on Template2 under the single-round or multi-round transcription condition. Probe intensities were normalized to the no-factor condition. ( E ) Pie chart showing the fraction of different outcomes for head-on collisions observed on Template2 in the presence of GreB in the single-molecule assay. GreB was supplied in channel 4 at a final concentration of 800 nM. N denotes the total number of collision events. ( F ) Fraction of arrested forward and reverse ECs observed on Template2 with or without GreB. Data are presented as mean ± SEM from three independent experiments. Significance was determined using two-sided unpaired Student’s t -tests (* P 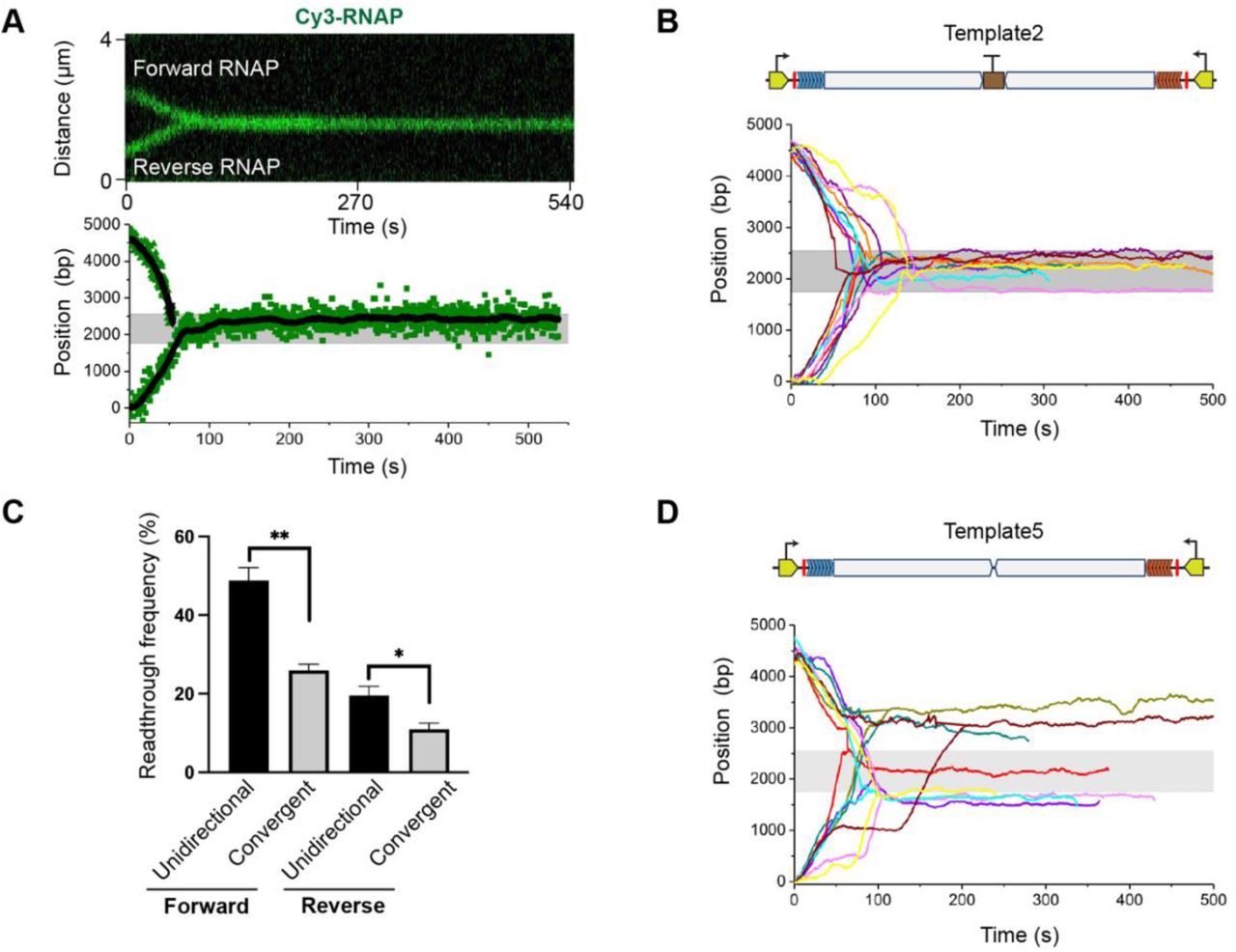 Figure Legend Snippet: Outcome of head-on collisions at the bidirectional terminator. ( A ) Three different outcomes of head-on collision between two convergent RNAPs at the bidirectional terminator on Template2 (depicted in Figure 2A ). ( Top ) Representative kymographs showing both RNAPs remaining on DNA ( Left ), one of the RNAPs dissociated ( Middle ), or both RNAPs dissociated ( Right ) after collision. ( Bottom ) Cy3 intensity profiles for selected regions from the kymograph on top (colored boxes). The summed pixel intensities of individual frames were displayed as gray dots. The filtered values (± 10-s average of frames) were shown as colored lines corresponding to the colored boxes. The number of RNAPs within the selected regions were assigned based on the photon count: under 1 as zero RNAP; between 1 and 3.5 as one RNAP (yellow shade); between 3.5 and 6.5 as two RNAPs (green shade). ( B ) Pie chart showing the fraction of each outcome illustrated in (A). ( C ) Visualizing head-on collisions by three-color imaging (Cy3 for RNAP, AlexaFluor488 for forward RNA, Cy5 for reverse RNA). Representative kymographs showing both ECs remaining on DNA ( Left ), one of the ECs dissociated ( Middle ; forward EC dissociated in this example), or both ECs dissociated ( Right ) after collision. ( D ) Pie chart showing the fraction of each outcome illustrated in (C). N denotes the total number of collision events. 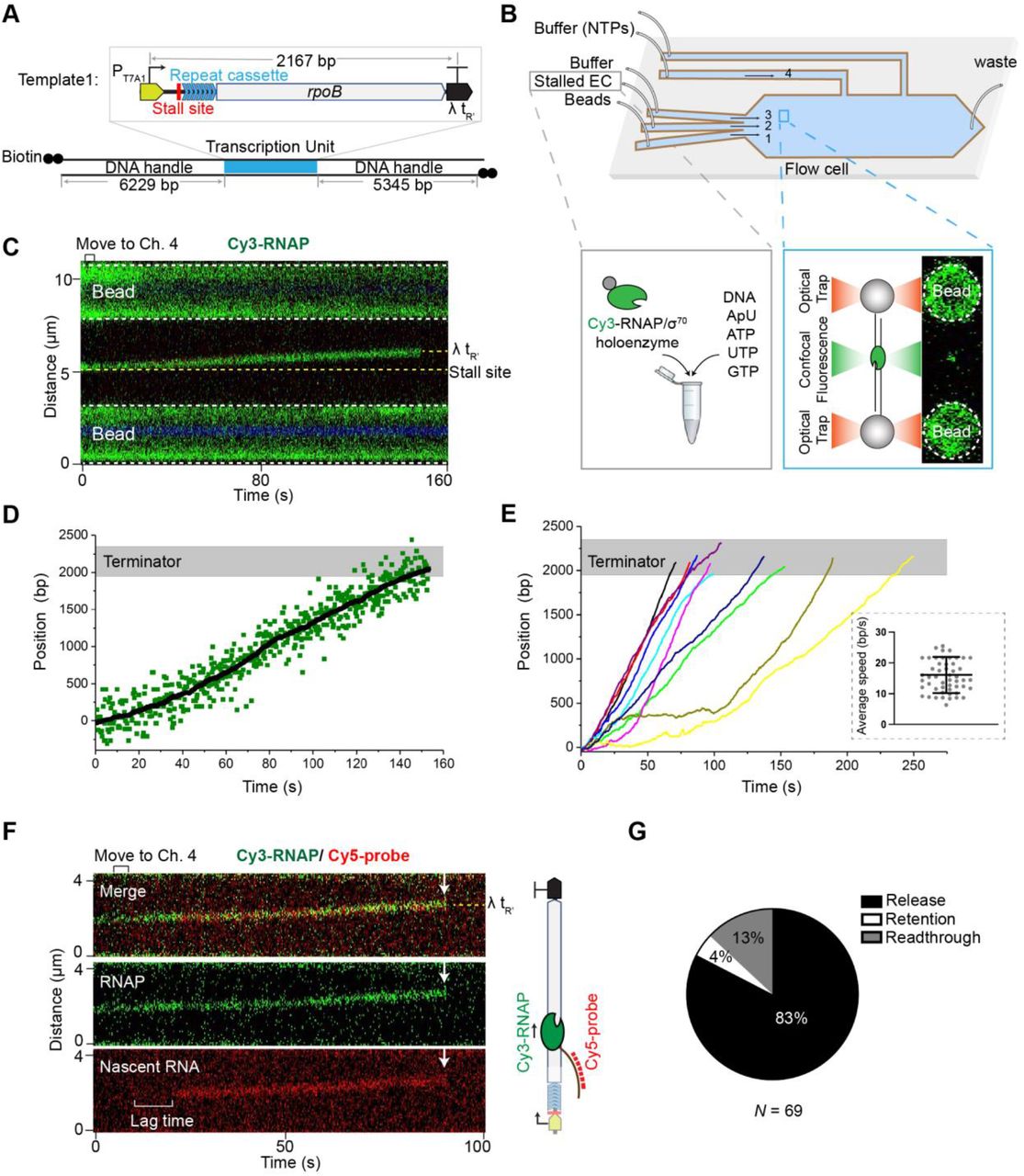 Figure Legend Snippet: ORC-mediated MCM loading occurs at nucleosomal sites. a Cartoon illustrating the experimental assay that evaluates MCM loading at nucleosomal sites via high-salt wash. b A representative kymograph showing that MCM complexes (red) formed on a DNA tether in the presence of unlabeled ORC, Cdc6 and Cdt1. Upon moving to a high-salt buffer (0.5 M NaCl), a fraction of the MCMs displayed diffusive behavior without dissociation, demonstrating their successful loading onto DNA. MCM diffusion could occur from both bare DNA and nucleosome sites (white arrowheads in the zoomed-in view). Blue arrowheads indicate nucleosome positions, all of which were at non-ARS1 sites in this example. MCM and nucleosome fluorescence signals are also separately shown in gray scale at the bottom. c Fraction of nucleosome-colocalized MCM complexes that underwent diffusion without dissociation (red), remained stably bound to the nucleosome (black), or dissociated into solution (white) upon high-salt wash. n indicates the number of MCM complexes analyzed. Source data are provided as a Source Data file.

Figure Legend Snippet: A single-molecule platform to study eukaryotic replication initiation. a Cartoon of the λ ARS1 DNA template. The inserted ARS1 element is illustrated in the inset box. b Schematic of the single-molecule experimental setup. Channels 1–3 are separated by laminar flow. Beads are optically trapped in channel 1, moved to channel 2 to tether DNA, then moved to channel 3 to characterize the force-extension curve of the tether. Once a correct tether is confirmed, the beads-DNA assembly is moved to channel 4 or 5 containing the proteins. The zoom-in box illustrates the final assembly in the imaging channel (not drawn to scale). c A representative kymograph showing the behavior of Cy3-labeled ORC on λ ARS1 DNA in the presence of Cdc6. The engineered ARS1 position is indicated. d Fraction of λ ARS1 DNA tethers that were observed to have at least one ORC bound in the presence or absence of Cdc6. The protein concentrations used in this experiment are: 2 nM for ORC, and 5 nM for Cdc6. The number of tethers analyzed for each condition is indicated. Data are presented as mean values ± SD from three independent experiments. Significance was obtained using an unpaired two-tailed t- test (* p

Figure Legend Snippet: ORC predominantly binds to nucleosomes over bare DNA. a Cartoon of the λ ARS1 DNA sparsely loaded with Cy3-labeled S.c. nucleosomes (green) and incubated with LD650-labeled ORC (red) and Cdc6. b A representative kymograph showing a λ ARS1 DNA tether loaded with multiple nucleosomes (positions indicated by green arrowheads), all of which were located at non-ARS1 sites except one. Each nucleosome was observed to be stably bound by ORC (red). The presence of ORC on the nucleosomes is confirmed by turning off the green laser, which showed only the red fluorescence from ORC; alternatively, turning off the red laser showed only the green fluorescence from the nucleosomes. c Fraction of ORC stably bound to nucleosomes (X.l. or S.c.) located at either the ARS1 site or non-ARS1 sites. n indicates the number of ORC molecules analyzed for each condition. d Fraction of nucleosomes (X.l. or S.c.) within a given DNA tether that were observed to be ORC-bound in the presence of 2 nM ORC and 5 nM Cdc6. The number of tethers analyzed for each condition is indicated. Data are presented as mean values ± SD. Significance was obtained using an unpaired two-tailed t -test (ns, p = 0.41). Source data are provided as a Source Data file.

Figure Legend Snippet: ORC-dependent MCM loading occurs frequently at non-ARS DNA sites. a Cartoon of the single-molecule pre-RC assembly experiment using λ ARS1 DNA, unlabeled ORC, Cdc6, Cdt1, and LD650-labeled MCM (red). b An example kymograph showing that the MCM fluorescence signal appeared at a non-ARS1 position on DNA. c Fraction of stably bound MCM complexes that were observed at ARS1 vs. non-ARS1 positions. n indicates the number of MCM complexes analyzed. d Example kymographs showing the photobleaching steps (white arrows) of MCM fluorescence at ARS1 and non-ARS1 positions on the DNA tether. e Distribution of the number of photobleaching steps observed in each MCM fluorescence trajectory. n indicates the number of trajectories analyzed. f Fraction of DNA tethers that were observed to harbor at least one fluorescent MCM complex in the presence or absence of ORC. The protein concentrations used in this experiment are: 10 nM for MCM, 2 nM for ORC, and 5 nM for Cdc6. The number of tethers analyzed for each condition is indicated. g Cartoon of the high-salt wash experiment to demonstrate MCM loading on DNA using a mixture of LD650-MCM and Cy3-MCM, unlabeled ORC, Cdc6 and Cdt1. h A representative kymograph showing large-scale mobility of an MCM DH (indicated by the dual-color complex which appeared as yellow) loaded at a non-ARS1 position traversing the entire length of the tethered DNA upon high-salt wash (yellow arrowhead). The other MCM complex dissociated at high salt (white arrowhead). i Fraction of MCM complexes on nucleosome-free DNA that underwent sliding on DNA without dissociation (red), remained stably bound to the DNA position (black), or dissociated into solution (white) upon high-salt wash. n indicates the number of MCM complexes analyzed. Source data are provided as a Source Data file.

Figure Lengend Snippet: Experimental procedure, time, and cost of multiple genetic abnormalities sequencing (MGA-Seq). (A) Flowchart of MGA-Seq. Nuclei were cross-linked with 0.5% formaldehyde and then digested with HindIII. 5’ DNA overhangs of digested chromatin fragments were filled in by DNA polymerase and then proximity ligated by T4 DNA ligase. The proximity ligation products were fragmented and then subjected to high-throughput sequencing library construction. After sequencing, all the reads were used to generate chromatin contact matrix for genome structural variation calling. In the sequencing library, the reads without ligation junction “AAGCTAGCTT” were used for the detection of CNV, SNP, small indels (