1) Product Images from "Biological and molecular characterization of fEg-Eco19, a lytic bacteriophage active against an antibiotic-resistant clinical Escherichia coli isolate" Figure Legend Snippet: eA3A activity on long, single-stranded substrates with matched sequences. (a) Left – 10 ng of ssDNA or RNA substrates were reacted with eA3A (left to right, 15 μM and then 10-fold dilutions from 6 μM to 60 pM) for 30 min at 37 °C. Following PCR or RT-PCR, the amplicons were digested with ClaI, with representative gel images shown. Right – Quantification of percent deamination as a function of A3A concentration for ssDNA (purple) or RNA (green). Data represent mean and standard deviation from four independent replicates. (b) Base resolution map showing percent deamination vs. the position of cytosines across the 720mer as per NGS analysis. ssDNA data from reaction with 0.06 nM eA3A is shown in purple above the axis, while data from RNA reacted with 6 μM eA3A is shown in green below the axis. Data represent the mean deamination at each position from two independent experiments with results from individual amplicons provided in Supplementary Table , and the most heavily deaminated cytosine for each substrate labelled with its position, selectivity factor, and percent editing. 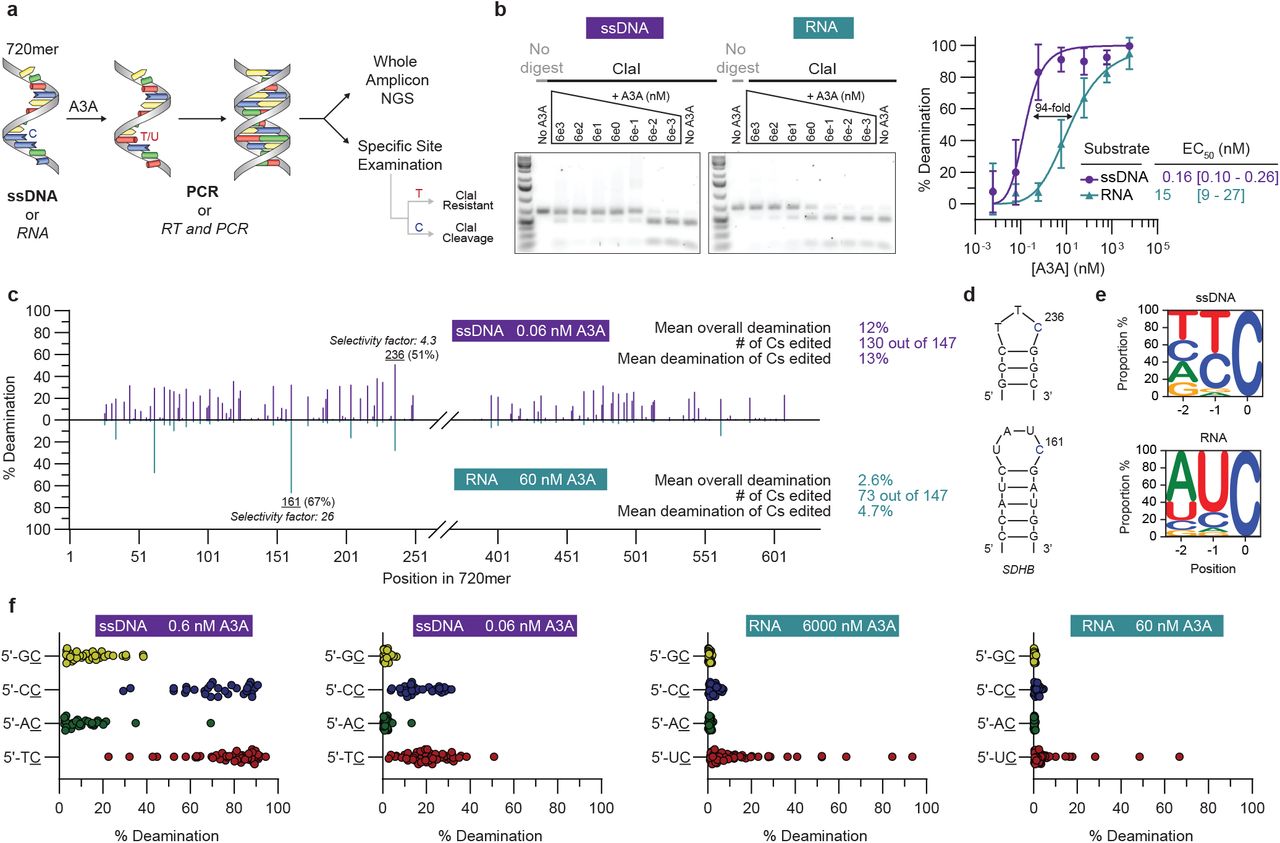 Figure Legend Snippet: A3A activity on long, single-stranded substrates with matched sequences. (a) 720mer assay diagram. Sequence-matched ssDNA and RNA substrates were reacted with A3A. The samples were amplified by PCR (ssDNA) or RT-PCR (RNA). Amplified products were then subjected to site-specific examination via the use of restriction enzymes, such as ClaI, or to whole amplicon Next-Generation Sequencing (NGS). ClaI cleaves non-deaminated substrates but not the deaminated products. (b) Left – Representative gels of A3A titration. 10 ng of ssDNA and RNA substrates were reacted with 10-fold dilutions of A3A (6 μM to 6 pM, left to right) for 30 min at 37 °C. Following amplification, amplicons were digested with ClaI and imaged on a 1.5% agarose gel. Right – Quantification of percent deamination at the SDHB site for ssDNA (purple) and RNA (teal) as a function of A3A concentration. Data represent four independent replicates with mean and standard deviation plotted. Product formation was fit to determine the EC 50 . (c) Base resolution map showing percent deamination vs. the position of cytosines across the 720mer as per NGS analysis. ssDNA data from reaction with 0.06 nM A3A is shown in purple above the axis, while data from RNA reacted with 60 nM A3A is shown in teal below the axis. The middle 134 bp are not included in the analysis due to the limitations of paired-end sequencing. Data represent the mean deamination at each position from two independent experiments with results from individual amplicons provided in Supplementary Table . The most heavily deaminated cytosine for each substrate is labelled with its position in the 720mer, selectivity factor, and percent editing. (d) Schematic representation of the stem-loop structures of the most heavily deaminated cytosine for each substrate. Top – cytosine at position 236 in ssDNA. Bottom – SDHB site; cytosine at position 161 in RNA. (e) Sequence logos of editing sites for ssDNA and RNA samples after correcting for background editing levels. Position 0 represents the target C. (f) Jitter plots showing percent deamination for substrates reacted with different concentrations of A3A, separated by sequence context, highlighting the higher proficiency and lower specificity for deamination of ssDNA versus RNA. Figure Legend Snippet: Transduction of hES cells with murine retroviral vectors. ( A ) Transfection efficiencies of undifferentiated hES cells using optimized protocols for lipofection (L), electroporation (E) and nucleofection (N) techniques. ( B ) mCAT1-HA expression (green) in nucleofected hES cells cultured on matrigel. Twenty-four hours after plating, the cells show a flattened morphology typical for colonies propagated on matrigel. Nuclear expression of Oct-4 (red) reflects their undifferentiated state. ( C ) Schematic illustration of the two-step protocol used for transduction of hES cells with ecotropic retroviral vectors. First cells are nucleofected with a construct encoding the murine retrovirus receptor mCAT1. Twenty-four hours later they are transduced with a murine retroviral vector. Transduced cultures are either analyzed for transgene expression after 48 h or subjected to selection of permanently transduced clones. The integrated provirus expresses the EGFP transgene from the viral LTR linked to a neomycin resistance gene (neoR) by an internal ribosome entry site (IRES). ( D ) Forty-eight hours after infection, 16.4 ± 5.9% of the total cell population showed EGFP-expression. Normalized to the proportion of mCAT1-expressing cells determined in (A), this corresponds to a calculated transduction efficiency of ∼30% of the mCAT1-expressing cells (mean values from n = 5 independent experiments). ( E – G ) Transduced EGFP-positive cells continue to express the pluripotency-associated markers Oct-4 (E), Tra-1-60 (F) and Tra-1-81 (G) (all red; counterstain DAPI). ( H ) Five passages after transduction, four clones were subjected to Southern analysis. A single integration of the EGFP transgene could be detected in clones PK2, PK4 and PK7. Clone PK5 displays two bands, which could be the result of a double integration, a mixed clone population or a mutation of the vector provirus. Restriction analysis was performed with EcoRI (for genomic DNA) and ClaI (unique site within the retroviral vector). Scale bars: B,E: 100 μm; F: 30 μm; G: 50 μm. Figure Legend Snippet: Determination of the nucleotides opposite the AP site in the final replication products (after 75 min of incubation in NPE). ( A ) Restriction digestion of the gel-purified supercoiled final replication products (detected by 32 P) and the control pET28a DNA (detected by SYBR Gold). R: relaxed; L: linear; S: supercoiled. ( B ) Transformation efficiency of pET28a (kan R ; expressed in percentages of the number of transformants of the uncut DNA) and AP DNA (amp R ; expressed in absolute colony numbers). ( C ) The nucleotides found at the position opposite the AP lesion in the plasmids isolated from the transformants of the DpnI and ClaI-digested Δ:C and Δ:G replication products. ( D ) The average ratios and absolute deviations of each nucleotide inserted at the position opposite the AP lesion for the Δ:C and Δ:G replication products. The data were from two independent experiments for each substrate. The right-most column listed the expected ratios if the AP lesion was replicated by random insertion of the 4 nt. Figure Lengend Snippet: Sequential assembly of NER factors onto RNA pol IIO. ( A ) Scheme depicting the reaction. Cax-Pt was transcribed and then cut by Cla I to form the Cla I-cut EC-400, which was further incubated with different combinations of four repair factors (the omitted

Article Snippet: Cax-Pt was then cut by () in a reaction volume of 40 ml. Article Title: Vpma phase variation is important for survival and persistence of Mycoplasma agalactiae in the immunocompetent host

Article Snippet: Confirming xer1 disruption via Southern blot analyses Mycoplasma genomic DNA was isolated by QIAamp DNA Mini Kit (Qiagen) and digested with () at 37°C for at least 6–7 h before subjecting to electrophoresis on a 1% agarose gel. Figure Lengend Snippet: Validation of TGR of WT- ply from IDM- ply mutant. (A) Expression of WT-PLY in the 8 h, Day 1 and Day 2 IDM- ply culture by real-time PCR (B) Cla I- digested D39, IDM- ply and AG2, which was sensitive to erm and was obtained from Day 1 culture of IDM- ply mutant, were probed with a digoxigenin-labeled ply-pb in southern blot hybridization. (C) AG2 would produce PLY whose size was the same as PLY of D39 when incubating with a rabbit polyclonal PLY antibody. Figure Lengend Snippet: Construction of the ply and lytA knockdown mutants by IDM. Partial sequences of pneumolysin ( ply -s) (A) and autolysin ( lytA -s) (B) genes were cloned into plasmids pVA891 (A) and pEVP3 (B) , containing an erythromycin (erm)- and a chloramphenicol (cat)-resistance marker, respectively. Cloned plasmids were then used to generate homologous recombinants from their WT ply or lytA genes, respectively. Two primer sets, ply-P1/pVA891-R and ply-P2/pVA891-F or lytA-P1/pEVP3-R and lytA-P2/pEVP3-F, were used to verify the insertion of pVA891 and pEVP3 in IDM- ply (A) and - lytA (B) , respectively. C, Cla I.