Figure Lengend Snippet: CNNMs interact with TRPM7 and regulate its activity. (A) HA-TRPM7 was coexpressed with FLAG-tagged CNNM1-4 in HEK-293T cells, and the channel was immunoprecipitated with HA-agarose. CNNM1 and CNNM3 strongly interacted with TRPM7. CNNM2 and CNNM4 also interacted with TRPM7, but lowered TRPM7 expression nonspecifically. CNNMs were not coimmunoprecipitated from HEK-293T cells N.T. with HA-TRPM7. Supplementation of the growth medium with 20 mM MgCl 2 boosted TRPM7 expression, revealing the channel’s capacity to interact with CNNM2 and CNNM4. (B) FLAG-tagged TRPM7 robustly coimmunoprecipitated native CNNM3 and CNNM4, whereas FLAG-TRPM2 did not. (C) A Zinc influx assay using the FluoZin-3 Zn 2 + indicator was used to monitor TRPM7 function in intact 293-TRPM7 cells (293-M7 cells), which express FLAG-tagged TRPM7 upon tetracycline treatment. Coexpression of CNNMs with TRPM7 increased intracellular free Zn 2 + more than expression of TRPM7 alone. The T-REx-293 cell line (293), which expresses the Tet Repressor protein, was used as the negative control. Shown are images taken at a time point between 5 and 10 minutes after application of 30 μM ZnCl 2 . White scale bar = 100 μM. (D) Quantification of the results from (C). A total of 100 cells were randomly selected for quantification. n = 100. * indicates a p -value of less than 0.05. (E) Western blot showing expression of TRPM7 in the sample from (C). (F) Separate time course measurements were also acquired to further demonstrate that cells coexpressing CNNMs with TRPM7 have a higher rate of Zn 2+ influx compared to 293-TRPM7 cells expressing TRPM7 or CNNMs alone. HBSS media was replaced with HBSS containing 30 μM ZnCl 2 for the period indicated. The fluorescence intensity of the cells (mean of 50 cells) were quantified for each time point. Unprocessed images of blots are shown in S1 Raw Images . The underlying data for this figure can be found in S1 Data . HBSS, Hanks’ balanced salt solution; N.T., not transfected. Figure Lengend Snippet: Specific TRMP7 agonist bradykinin aggravated inflammation and apoptosis in TCMK-1 cells. TRPM7, HMGB1, 32, 17 and 12 kDa caspase-3, Bax and Bcl-2 were detected by western blotting ( a ). In HR TCMK-1 cells, CHBP decreased the expression of TRPM7, HMGB1, 32 and17 kDa caspase-3 and Bax/Bcl-2 ratio, while bradykinin and bradykinin + CHBP significantly increased the expression of TRPM7, HMGB1, 17 kDa caspase-3 and Bax/Bcl-2 ratio ( b ). There was no significant difference in 12 kDa caspase-3 between all groups, and in 32 kDa caspase-3 between groups with or without Bradykinin. Apoptotic cells were labelled by Annexin V/PI staining and quantitatively assessed by flow cytometer ( c ). The histograms showed that the increase of early apoptotic cells in the HR group was inhibited by CHBP, but further increased by bradykinin. There was no statistical significance between HR and HR + CHBP + Bradykinin (n = 3, ( d )). Figure Lengend Snippet: The inhibited role of CHBP on increased TRPM7 at mRNA and protein levels in HR cells and IR kidneys. TRPM7 mRNA level was increased by 24-h reperfusion in both TCMK-1 ( a ) and HK-2 cells ( b ) subjected to 12-h HR, While TRPM7 protein level was also increased in TCMK-1 cells subjected to 24-h reoxygenation in 12-h H TCMK-1 cells ( c ), and in the mouse kidneys followed 12 h, 24 h, and 7 days reperfusion ( d ). In addition, the expression of TRPM7 mRNA (A) and protein ( c ) was reduced in the 12-h, 24-h HR TCMK-1 cells by 30 nM CHBP at the onset of hypoxia. The TRPM7 protein was significantly reduced by 8 nmol/Kg CHBP intraperitoneally injected in the 5-d, 7-d IR mouse kidneys ( d ). The volume density was quantitatively analyzed using 42 kDa β-actin as the loading control (n = 6). Figure Lengend Snippet: TRMP7 siRNA and inhibitor reduced inflammation and apoptosis inTCMK-1 cells. The protein expression of TRPM7, HMGB1, 32, 17 and 12 kDa caspase-3, Bax and Bcl-2 in the HR TCMK-1 cells was detected by western blotting ( a ). TRPM7 siRNA significantly reversed increased TRPM7, HMGB1, 32 and 17 kDa caspase-3 and Bax/Bcl-2 ratio, but not 12 kDa caspase-3 upon HR ( b ). Apoptotic cells were labelled by Annexin V/PI and quantitatively assessed by flow cytometer ( c , e ). The histograms showed that the increase of early apoptotic cells was inhibited by TRPM7 siRNA and its inhibitor 2-APB (n = 3, ( d , f )). 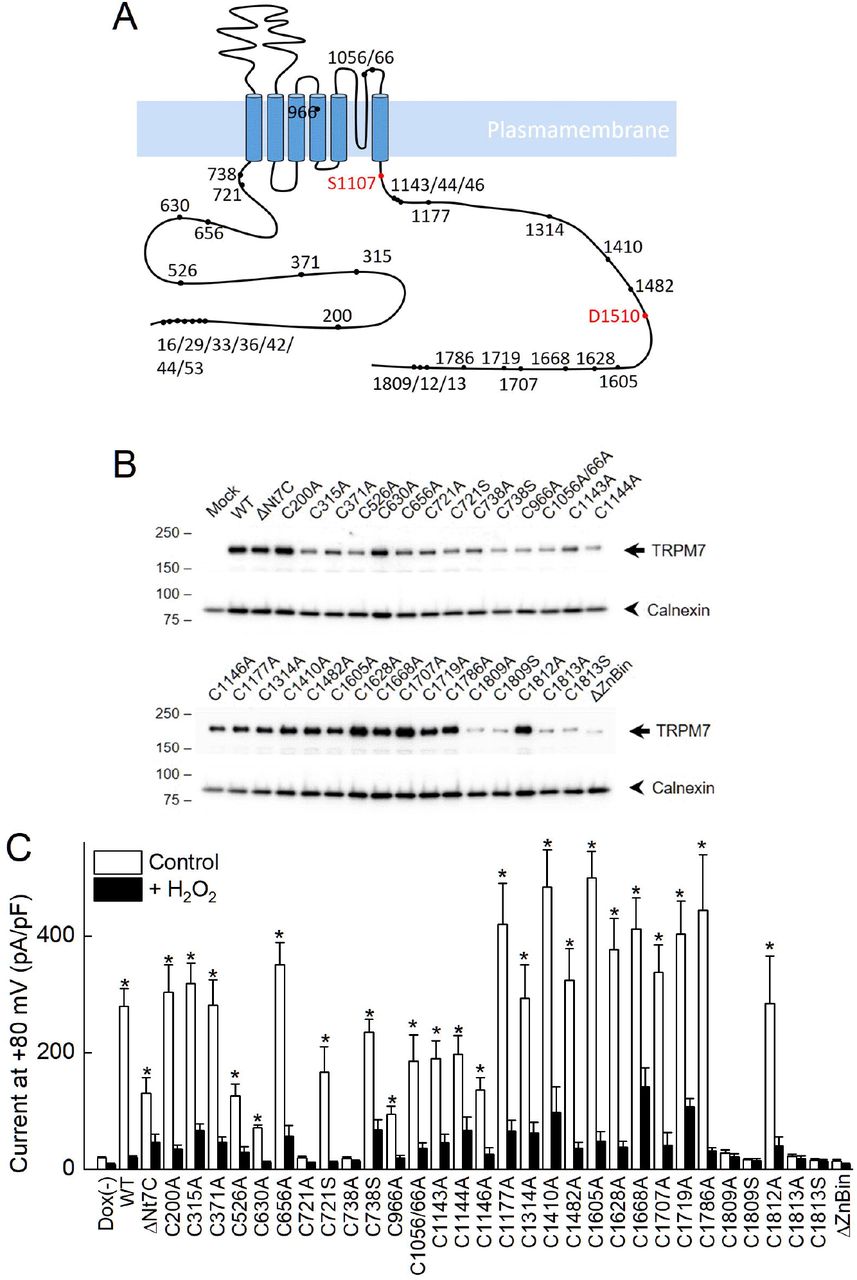 Figure Lengend Snippet: Screening of cysteines in mTRPM7 that were responsible for the oxidative stress-induced inhibition. (A) Schematic diagram of 34 cysteines that are conserved in mouse and human TRPM7. S1107 and D1510 were also depicted (red dots). (B) Expression of TRPM7-wt and its mutants. Immunoblotting of TRPM7 and calnexin (loading control) was performed with HEK293 whole-cell lysates. Numbers on the left represent molecular mass of standards (in kDa). (C) The effect of H 2 O 2 (500 µM) on mutant TRPM7 current at 0.2 mM [Mg 2+ ] i . Each bar represents the mean ± SEM (vertical bar) of 6–13 observations. * p 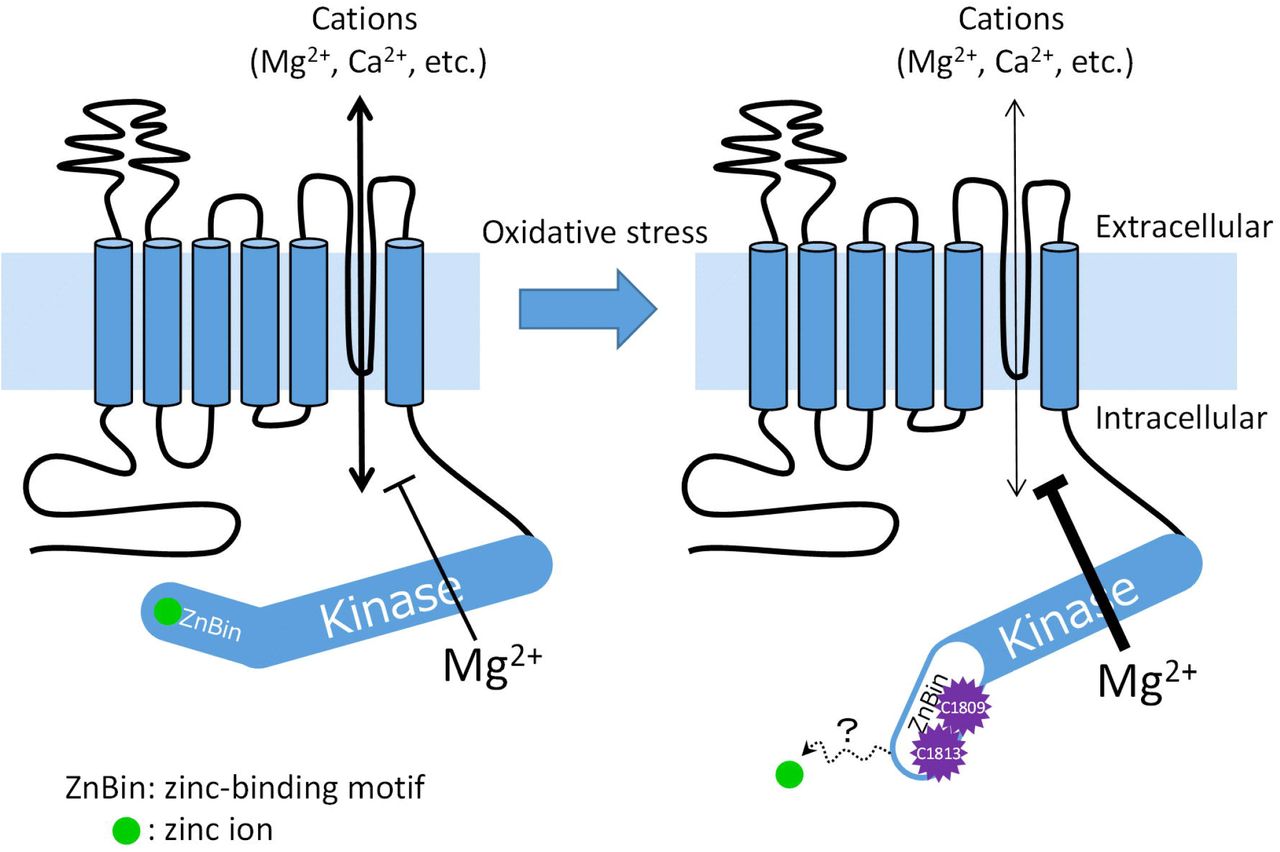 Figure Lengend Snippet: Schematic illustration of TRPM7 regulation by oxidative stress. (Left) Under basal conditions, Mg 2+ -inhibition of TRPM7 current is attenuated by the kinase domain possibly via the interaction with the channel domain. (Right) Oxidative stress causes the oxidation of the cysteines (C1809 and C1813) in the zinc-binding motif, which may disrupt the interaction between the channel domain and the kinase domain and enhance the inhibition of TRPM7 by intracellular Mg 2+ . 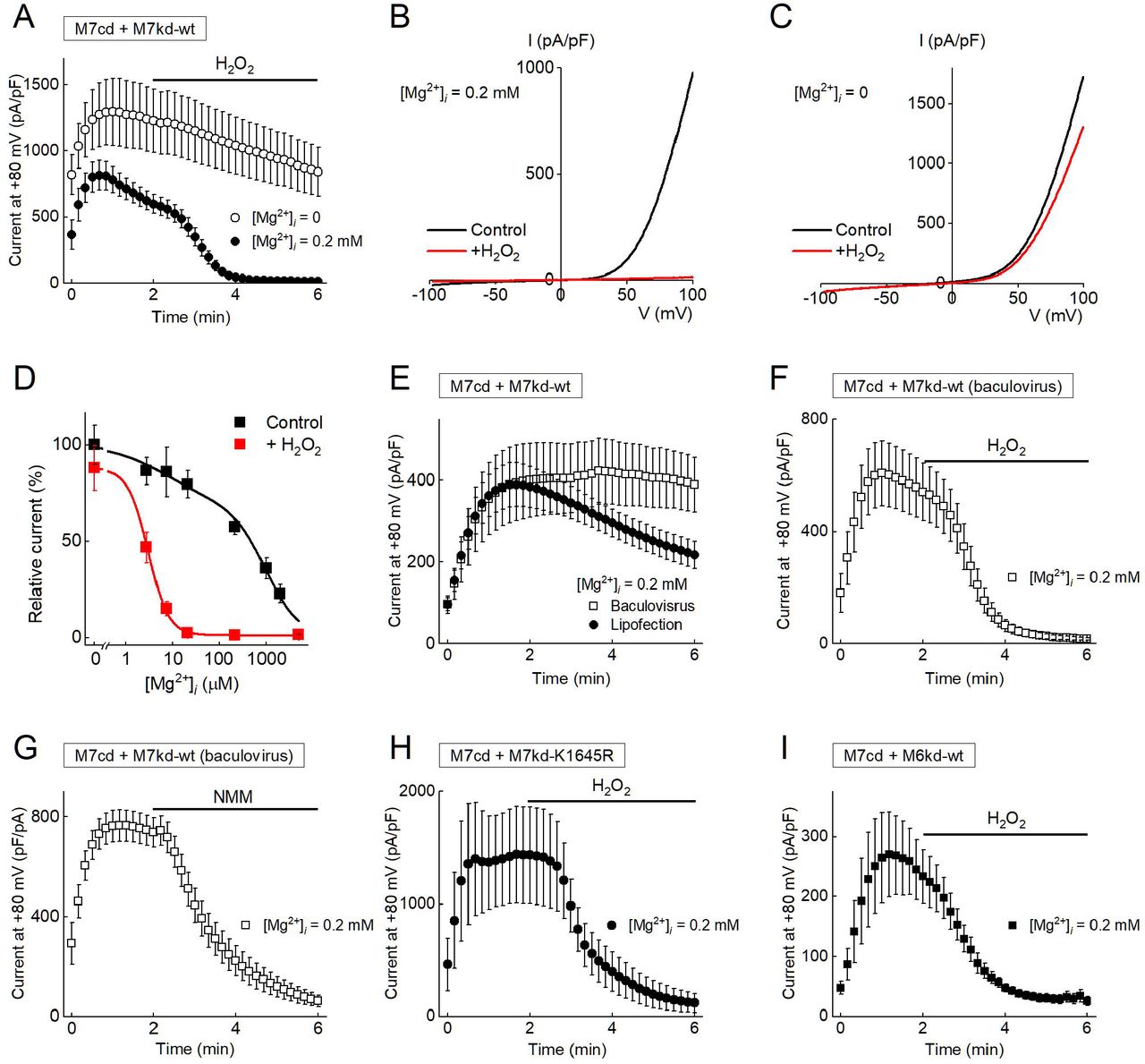 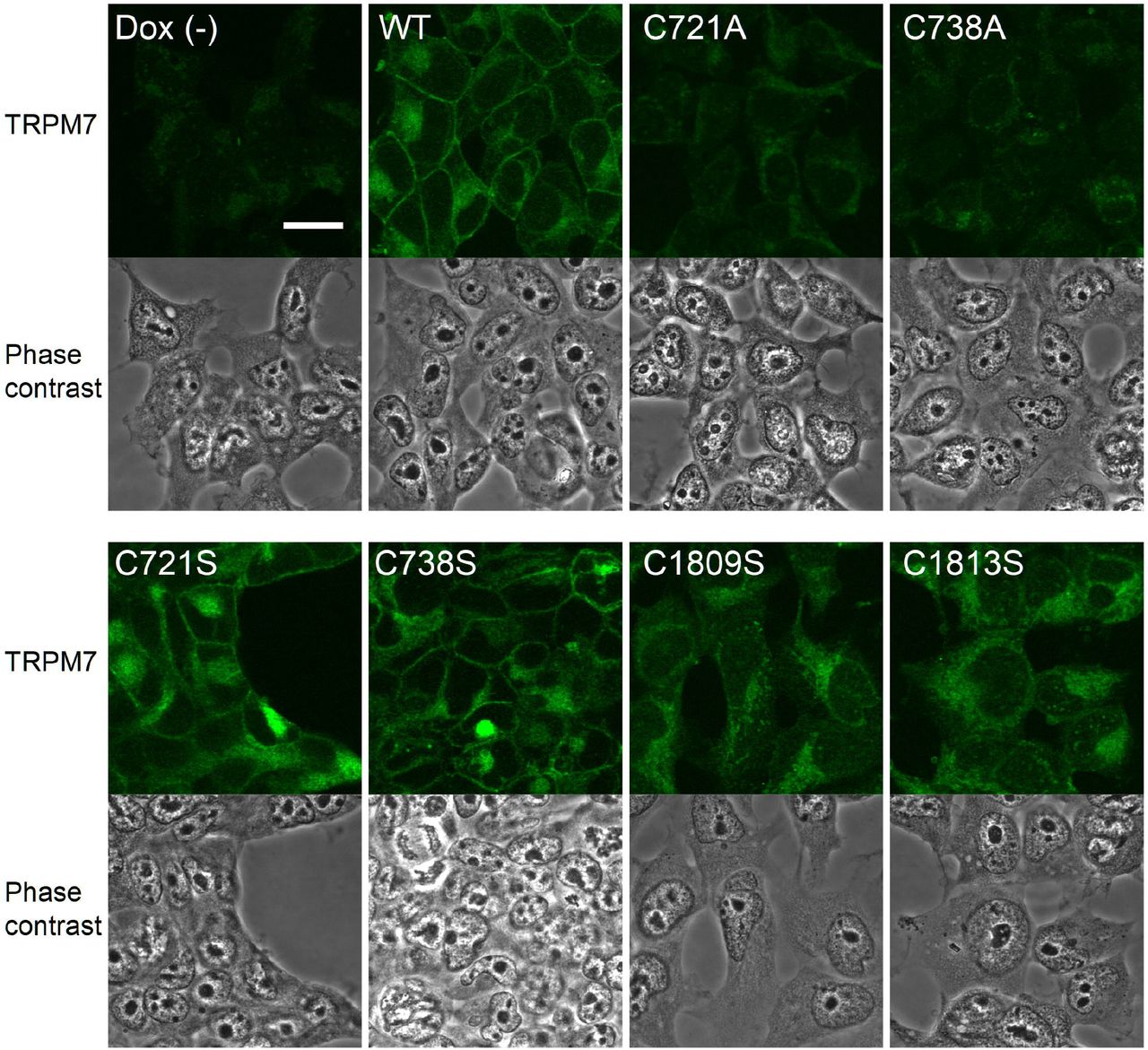 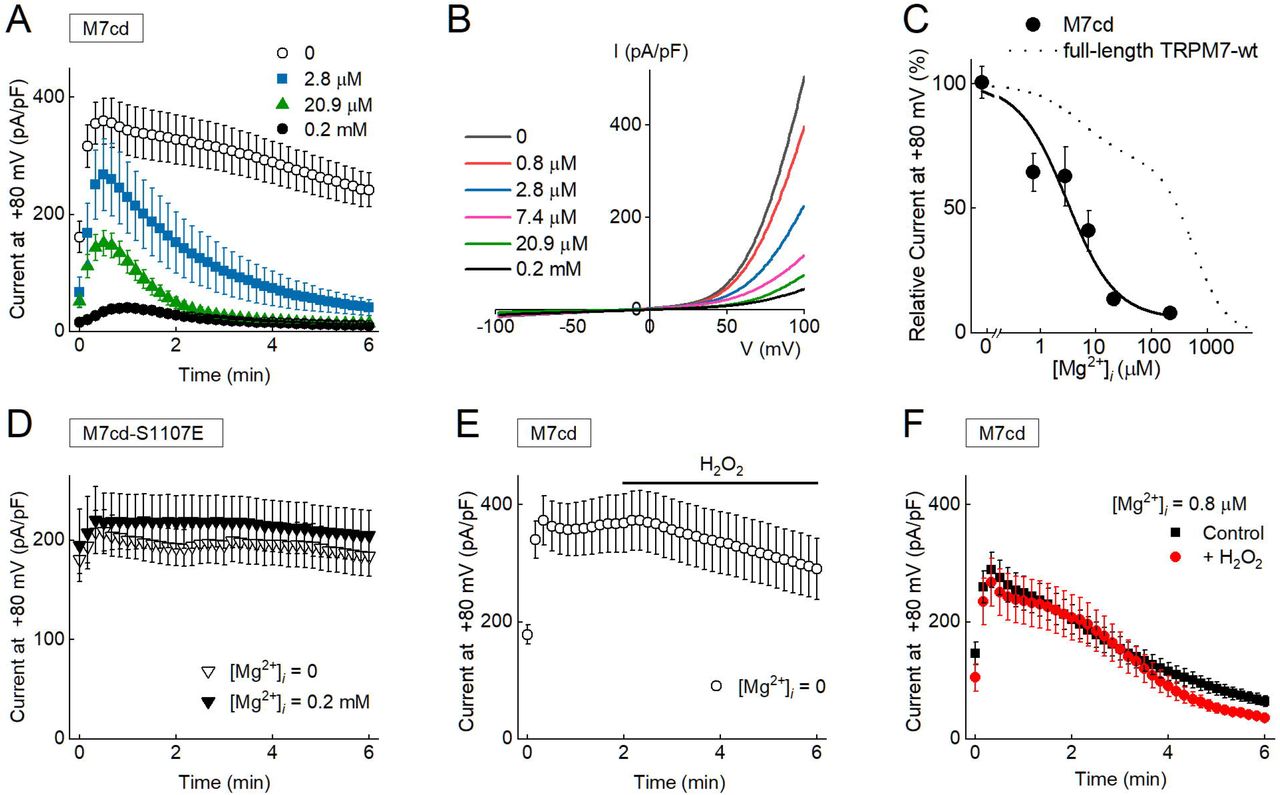 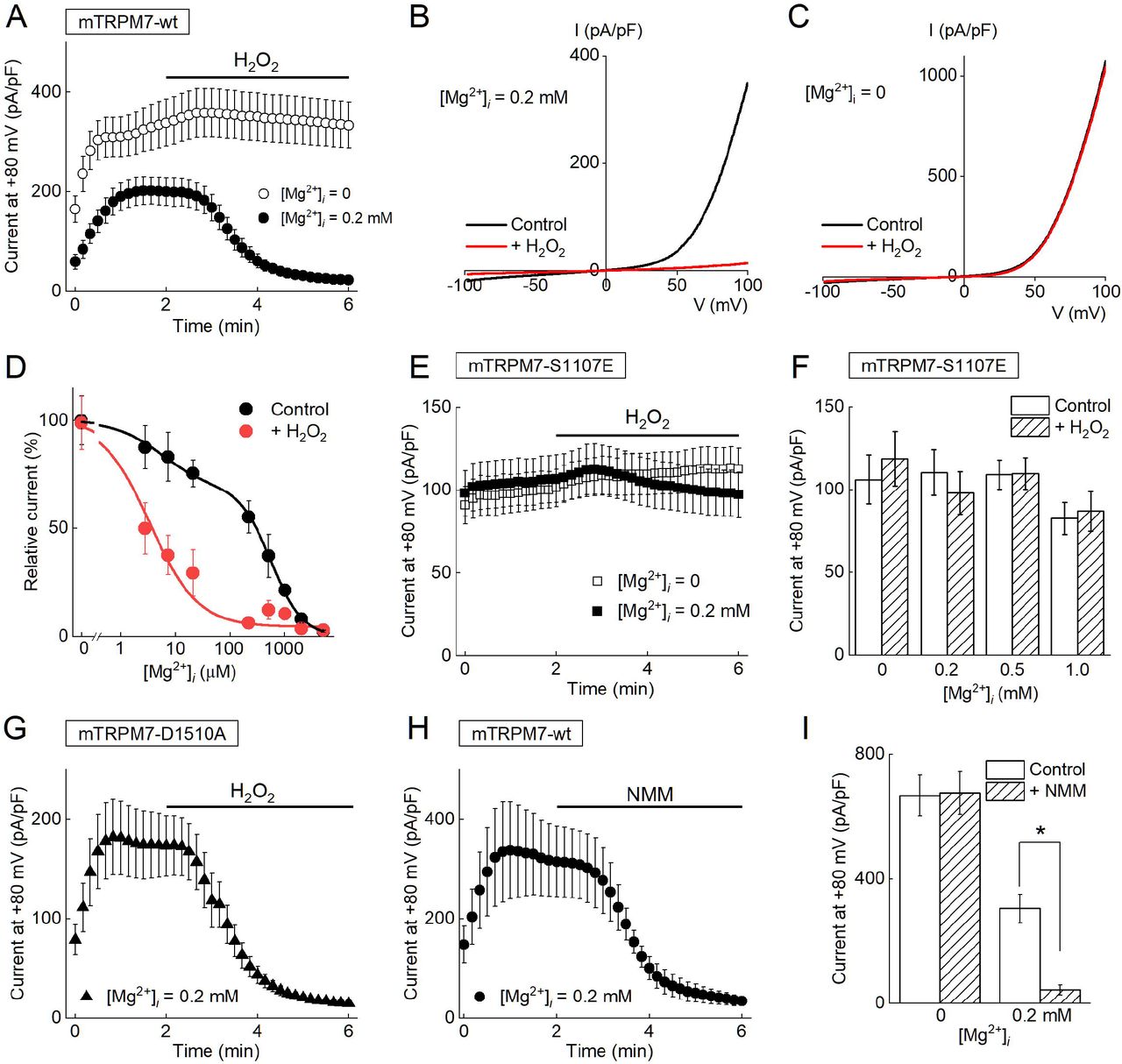