Figure Lengend Snippet: Activity with N6-methyl-dATP is unique to MTH1 within human NUDIX subfamily. Activities of human NUDIX enzyme (MTH1, NUDT15, NUDT17, and NUDT18) were assayed with data points in quadruplicate with 50 μ m dATP or N6-methyl-dATP at 20 and 200 n m enzyme in MTH1 reaction buffer (pH 8.0). 0.2 units/ml of PPase was used to convert formed PP i to P i that was detected using malachite green reagent and measurement of absorbance at 630 nm. Graph shows mean ± S.D. from one experiment performed in triplicate. Figure Lengend Snippet: Activity with N6-methyl-dATP is evolutionary conserved among vertebrates. MutT homologues (MTH1 and NUDT1) from different animal species as well as E. coli MutT and NUDT1 from the plant A. thaliana were screened for hydrolysis activity with N6-methyl-dATP. Enzyme (1.25 n m ) was incubated with 50 μ m N6-methyl-dATP in MTH1 reaction buffer (pH 7.5) with 0.4 units/ml of PPase for 20 min at 22 °C in triplicates. P i was detected using Biomol Green (Enzo Life Sciences). Absorbance at 630 nm was read after 20 min. A P i standard curve was included on the plate and used to convert the assay signal to produced PP i . Data are shown as hydrolyzed N6-methyl-dATP (μ m ) divided by concentration of NUDT1 enzyme (μ m ) per second. The graph shows the mean ± S.D. from an experiment performed in triplicate.

Figure Lengend Snippet: Kinetic characterization of MTH1-catalyzed hydrolysis of dATP, N6-methyl-dATP, N6-methyl-ATP, dGTP, and O6-methyl-dGTP. A, substrate saturation curves of MTH1 (1 n m ) were produced using MTH1 reaction buffer (pH 7.5). Initial rates were determined at dATP concentrations varied between 0 and 200 μ m and between 0 and 300 μ m for N6-methyl-dATP and N6-methyl-ATP, respectively, and for dGTP and O6-methyl-dGTP ( B ) using 0–300 and 0–200 μ m , respectively. Formed PP i was detected using PPiLight TM Inorganic Pyrophosphate Assay (Lonza) and the assay signal was converted to concentration of PP i by including a PP i standard curve on the assay plate. Figure Lengend Snippet: MTH1 activity with N6-methyl-dATP and N6-methyl-ATP compared with dATP. Activity of 1 and 5 n m MTH1 was tested with 50 μ m N6-methyl-dATP, dATP, ATP, and N6-methyl-ATP in MTH1 reaction buffer (pH 8.0) at 22 °C. Reaction time was 30 min and 0.2 units/ml of PPase was used to generate P i from produced PP i . P i was detected by addition of malachite green reagent followed by measurement of the absorbance at 630 nm. Controls with PPase only was included and background signal was subtracted from the assay data. A P i standard curve was included on the plate enabling determination of the concentration of formed PP i . Graph shows mean ± S.D. from one experiment performed in quadruplicate. Figure Lengend Snippet: Schematic representation of the recognition of nucleotides by hMTH1. Hydrogen bond interactions of ( A ) N6-methyl-dAMP (N6-metA), ( B ) 2-oxo-dATP (2-oxoA) ( 23 ), ( C ) O6-methyl-dGMP (O6-metG) ( 10 ), and ( D ) 8-oxo-dGMP (8-oxoG) ( 24 ). Hydrogen bonds are shown as dashed lines and bond distances are given in Angstroms (Å). Deprotonated aspartates, which act as hydrogen bond acceptors, are indicated by the minus sign , where this is unambiguous. 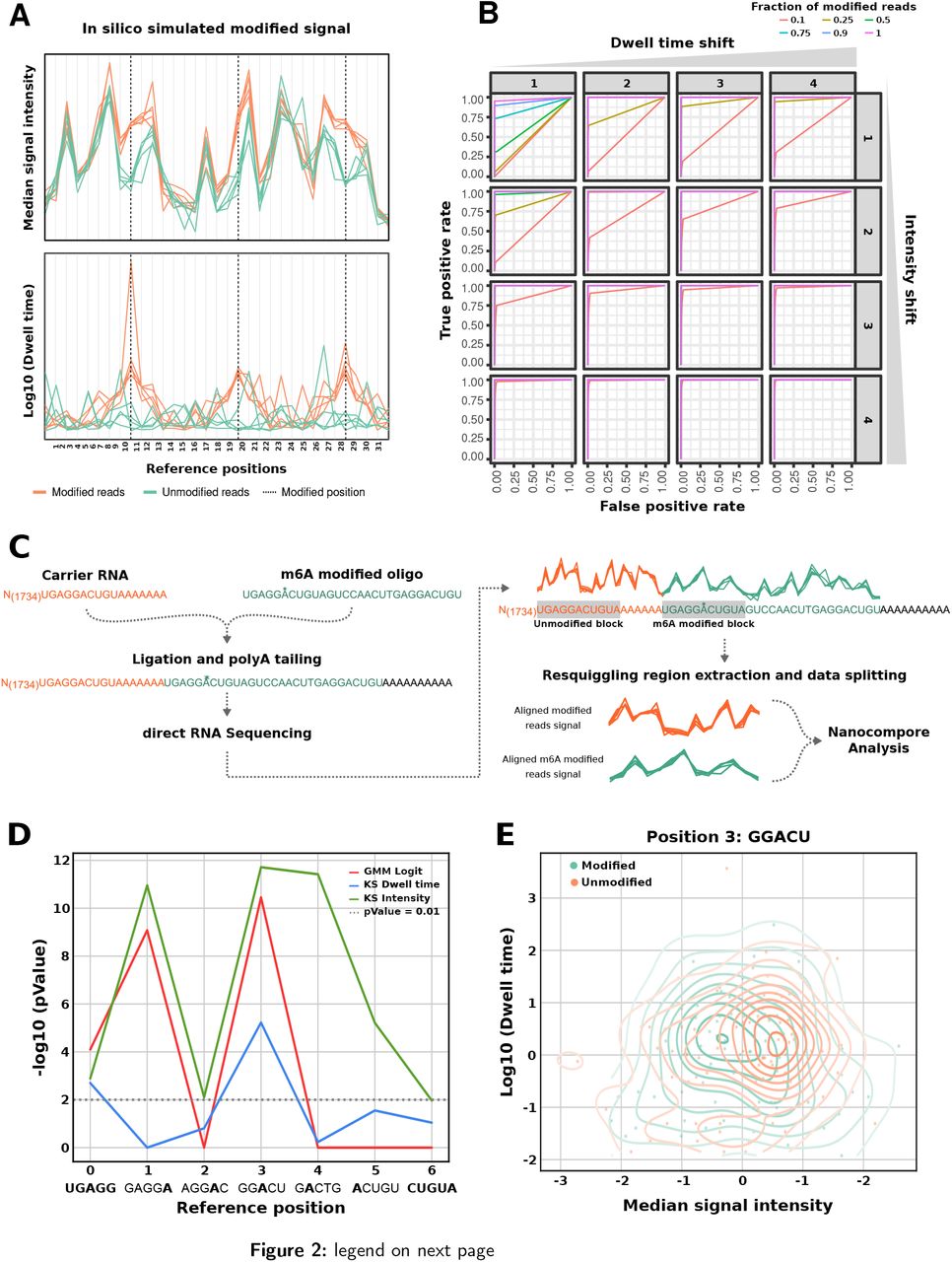 Figure Lengend Snippet: In silico and in vitro validation of Nanocompore. A: Position plots showing the median intensity (top) and dwell time (bottom) for simulated data generated by Nanocompore SimReads. Dashed vertical lines indicate modified positions, where a clear signal shift between unmodified (green) and modified (orange) reads can be seen. B: ROC curves obtained with the GMM method on in silico generated data. The different subplots indicate varying amounts of intensity and dwell time shifts from the unmodified model (from 1 to 4 standard deviations), whereas the different colors indicate varying fractions of modified reads in the generated data (from 10% to 100%). All the comparisons are against a fully unmodified reference dataset. C: Diagram depicting the experimental and signal processing workflow used to run Nanocompore on a synthetic RNA carrying an N6-methyladenosine residue. Briefly, the RNA sequence was obtained by ligating an oligo carrying an m6A residue at position 6 to a longer unmodified carrier obtained by IVT of the firefly luciferase gene. The data obtained by DRS was parsed to extract the signal from the 2 short regions corresponding to a “UGAGGACUGUA” with either an A or an m6A in the middle. D: Plot showing the Nanocompore p-values (-log 10 , y-axis. Tests: GMM+logit and KS) for the synthetically modified GGACU kmer and those surrounding it. E: Scatter plot showing the median signal intensity (x-axis) and scaled dwell time (log 10 , y-axis) for the synthetically modified kmer. The concentric lines show the kernel density estimates for the two samples. Journal: The American journal of physiology

Article Title: A novel cardioprotective function of adenosine A1 and A3 receptors during prolonged simulated ischemia

Figure Lengend Snippet: Effect of adenosine A 1 agonists on cardiac myocyte injury. Cultured ventricular myocytes were prepared, and extent of hypoxia-mediated myocyte injury was determined as described in METHODS. CHA, N 6 -cyclohexyladenosine; ADAC, adenosine amine congener. Adenosine A 1 -receptor agonists were added to medium at concentrations indicated in absence or presence of A 1 -receptor antagonist DPCPX during prolonged hypoxia. Percentage of cells killed was determined after hypoxic exposure and removal of A 1 -receptor agonists and antagonist. Data are means of 4 experiments. At 1 and 10 nM concentrations of A 1 agonists, percentages of myocytes killed were significantly lower than those obtained in presence of either of the 2 A 1 -agonist concentrations and DPCPX (1 μ M) ( P