Figure Legend Snippet: Toeprint analyses of translation initiation complexes on atpA and atpA – gfp RNAs. In vitro transcribed atpA – atpA ( left panels ) and atpA – gfp ( right panels ) RNAs (20 nM) were extended from [γ- 32 P] ATP-labeled oligos that anneal 120-nt downstream of the initiator AUGs, either alone or in the presence of tRNA Met , 30S subunit or both. Sequencing reactions were run alongside. The treatments are indicated at the top of each panel. The positions of the toeprints respective to the initiator AUG (+1) are indicated with lines on the side. a Toeprint reactions using 100-nM 30S subunit, b Inset showing the toeprint area of experiments similar to ( a ) with 200-nM 30S subunit. The figure shows representative autoradiographs obtained from three independent experiments Figure Legend Snippet: Characterization of apparent DNA strand exchange activity in SA proteins. (A) The reaction illustrated at the top of the panel was performed using a 32 bp radiolabeled dsDNA with flush ends as donor (oligos #4*/#5) and an unlabeled 57 nt oligo (#6) as recipient. Reactions containing 5 nM donor and 20 nM recipient were initiated by addition of the indicated concentrations of Rad52N, Sgs1 103–322 , or Rad59. Following incubation at 37°C for 30 min, the reactions were terminated and the products analyzed by 10% native PAGE and phosphorimaging. ( B ) SE reactions were carried out as in (A) except that aliquots of the reactions were removed at the indicated times and treated as above. ( C ) SE reactions were performed with Rad52 mutants. ( D ) SE assays were performed with sub-domains of WRN 235–526 . Figure Legend Snippet: Substrate single strands do not spontaneously reanneal at 30˚C. To determine whether unwound substrate oligos spontaneously reanneal under our reaction conditions, we mixed 0.5 nM final concentration of radiolabeled 50duplex LAG oligo ( Table 1 ) with 0.5 nM unlabeled 50 duplex LEAD oligo under reaction conditions identical to those of Figure 3 in a total reaction volume of 55 μl. Complete reactions were mixed on ice and started by incubating at 30°C. At the indicated time points, 10 μl aliquots were removed and flash frozen in liquid nitrogen. Lack of re-annealing of the unwound strands allowed us to perform unwinding reactions in Figure 3 and subsequent Figures in the absence of a trap, eliminating potential side interactions between CMG and the unlabeled trap DNA. DOI: http://dx.doi.org/10.7554/eLife.23449.010 Figure Legend Snippet: Schematics of biotinylated DNA fork substrates. The fork substrates used in the experiments in Figures 3 – 6 are shown including the location of the biotinylated dT nucleotides in either the leading or lagging strand template. The oligos used to make the forked duplex substrates are indicated to the right of the schematics and the oligo sequences and modifications are in Table 1 . DOI: http://dx.doi.org/10.7554/eLife.23449.008 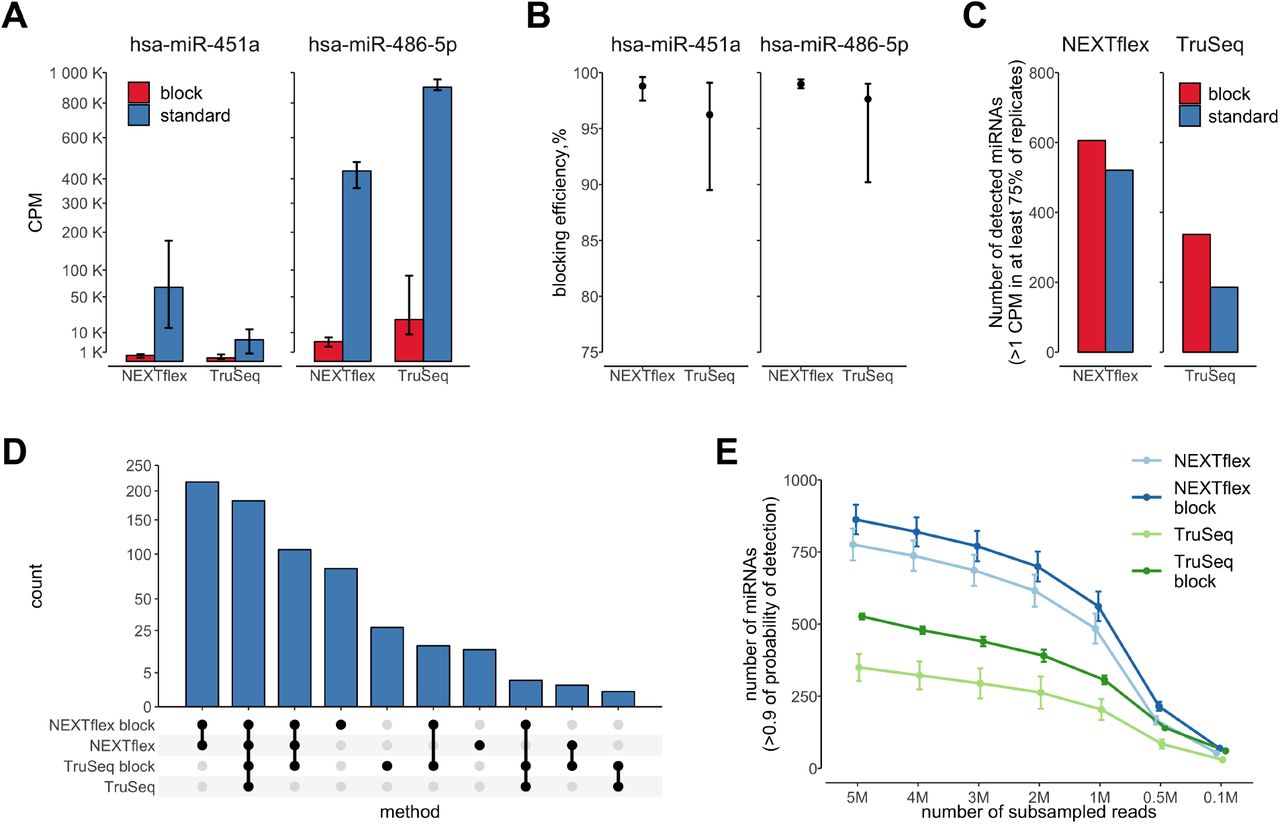 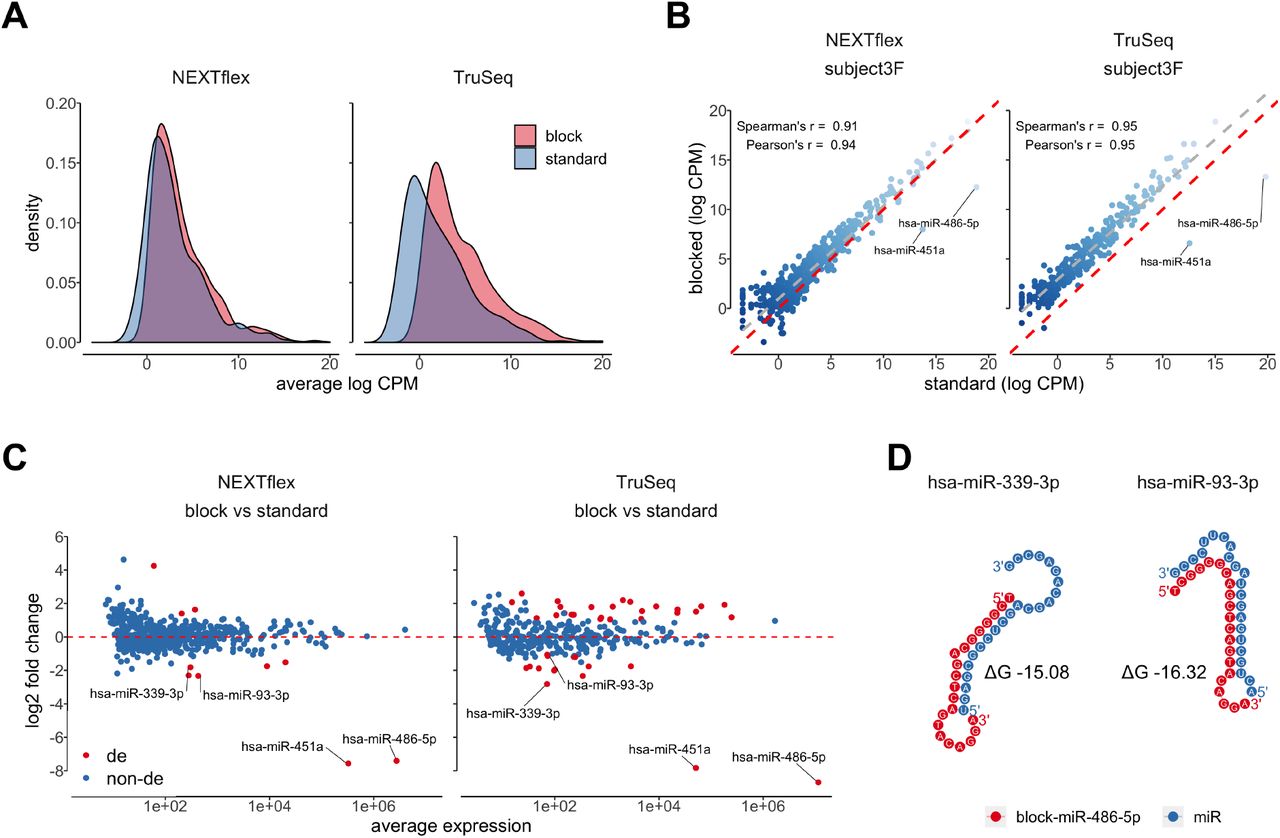 Figure Legend Snippet: Blocking oligonucleotides for miR-486-5p and miR-451a have positive and some negative effects on measured expression of non-targeted miRNAs. ( A ) A density chart shows distributions of averaged log2-transformed CPM values of blocked (red) and unblocked (blue) libraries prepared by NEXTflex and TruSeq protocols. The expression values of each miRNA were averaged per protocol (x-axis). The graph illustrates a proportional global shift of log2-transformed CPM values towards higher expression estimates in both blocked NEXTflex and TruSeq libraries; ( B ) A scatter plot represents correlation of log2-transformed CPM values of paired blocked (y-axis) and unblocked (x-axis) exemplary libraries generated by NEXTflex and TruSeq protocols. The red dashed line divides panel in two equal parts, whereas the grey dashed line displays a linear regression curve. The chart illustrates a high concordance of miRNA expression values between blocked and unblocked paired libraries; ( C ) An MA plot shows paired-differential expression analysis results of blocked versus unblocked libraries, where log2 fold changes are presented on the y-axis and averaged normalized counts on the x-axis. The red colored dots indicate significantly differentially expressed miRNAs (corrected P-value 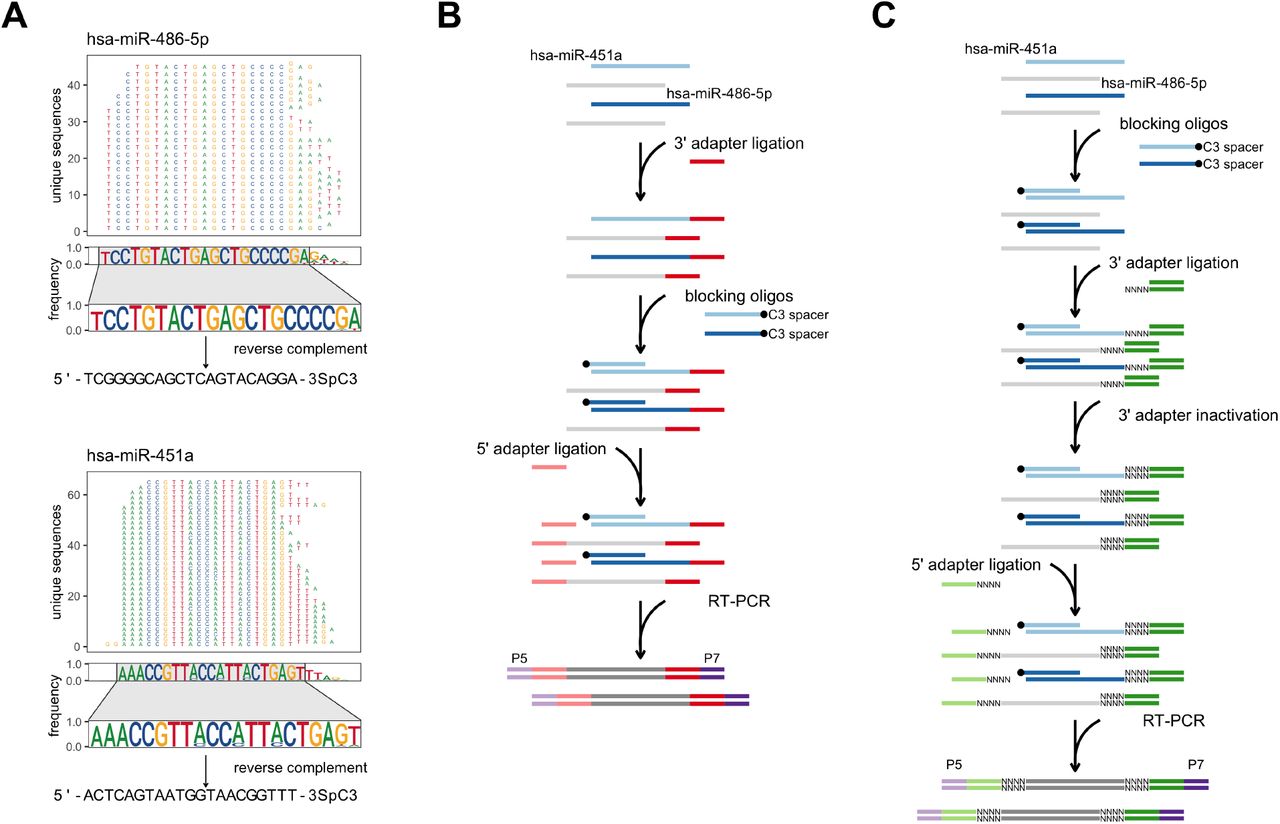 Figure Legend Snippet: Blocking oligo design and application workflows using modified TruSeq and NEXTflex small RNA library preparation protocols. ( A ) Design principle of miR-486-5p and miR-451a blocking oligonucleotides. Briefly, unique pooled-sample sequences which mapped to precursors of miR-486-5p and miR-451a were used to retrieve the most frequent nucleotide found at each position in a sequence alignment. The most stable consensus sequences were used to generate reverse complement DNA oligonucleotides of targeted miRNAs. The C3 spacer (propyl group) modification was added to the 3’ ends of the synthetic oligonucleotides to avoid self-ligation. Whole blood smRNA-seq data used for oligo design was obtained from GSE100467; ( B ) A schematic representation of modified Illumina’s TruSeq small RNA library preparation protocol. The modified protocol involves an additional step, where synthetic blocking oligonucleotides are introduced right before the 5’ adapter ligation reaction. In this step, the blocking oligonucleotides are annealed to target miRNAs, which results in double-stranded RNA:DNA hybrid formation. These blunt-ended or slight 3’ DNA overhang-having double-stranded hybrids are not suitable substrates for T4 RNA ligase-mediated addition of adapter oligonucleotide to the 5’ end of RNA strand in the hybrid. As a consequence, blocked RNA:DNA hybrids without 5’ adapter sequences cannot be amplified and therefore are depleted from final small RNA library; ( C ) A schematic workflow of modified Perkin Elmer’s NEXTflex small RNA library preparation protocol. In comparison to TruSeq, the standard NEXTflex protocol includes an extra step called 3’ adapter inactivation, where end-filling is performed to fill the gaps of random nucleotides bearing 5’ overhang portions of 3’ adapter duplexes. Because of this step, in order to avoid denaturation of the 3’ adapter duplexes, blocking oligos for miR-486-5p and miR-451a were introduced directly to total RNA sample. Figure Legend Snippet: Dynamic hybridization of DNA enables EOS. (a) Extension of single-stranded DNA by DNA polymerases and reverse transcriptases. Denaturing PAGE analysis of a 20 base single-stranded sequence, self-priming oligo-1 aka SPO-1, using different enzymes and dGTP. Despite a maximum of two bases of hybridization, some enzymes are able to extend this solid-phase oligonucleotide. None of these enzymes have previously been reported to have nucleotidyl transferase activity on single-stranded DNA. (b) Sequence-specific extension of single-stranded DNA. Duplase extension of four different 20 base oligos proceeds in a sequence-specific manner, and only two bases of hybridization are required for extension. * indicates unextended control. Extension with non-templated bases can be explained by misincorporation that occurs at long reaction times . (c) Extension of solid-phase oligos through intermolecular reactions. Magnetic beads were conjugated with either a 20 base poly-T oligo as illustrated in i, or with that oligo plus a 30 base poly-T oligo with an internal 5’-CAA-3’ sequence as illustrated in ii . Beads were extended using Duplase-3 and Cy5-ddGTP (* indicates unextended control during this step), after which, all samples were labeled with TdT and fluorescein-12-ddUTP. Oligos appear blue if extended with Duplase-3 and green if extended wtih TdT. Article Snippet: The pri-miRNA substrates were then amplified by pri-miR-21 and using Q5 High-Fidelity 2X Master Mix (, M0492S) according to the manufacturer's protocol. Figure Lengend Snippet: —Circularization and polishing of the w AlbB genome assembly and determination of oriC . De novo assembly of PacBio data produced a single contig representing the w AlbB genome, with terminal regions marked A1 and A2 in ( A ), showing high sequence identity over a 27 kb region, suggesting overlapping ends of a circular chromosome. They were therefore collapsed into a single consensus region “A” to represent the circular the chromosome, with the junction of circularization between regions A and B indicated by a blue arrow ( B ). This draft circular genome was polished using the PacBio ReSequencing.1 pipeline, and the junction of circularization was validated by Sanger sequencing of a 1.5 kb amplicon ( C ) produced by primers F1 and R1. The origin of the circular chromosome was reset to the beginning of the oriC locus. The permuted chromosome sequence was again polished using ReSequencing.1 pipeline in SMRT analysis software. The oriC sequence and the new junction of circularization at oriC was verified by primers F2 and R2 ( A and B ) that successfully produced an amplicon of correct size 1.5 kb ( C ) and correct sequence as confirmed by Sanger sequencing. The oriC locus in w AlbB has all the hallmarks observed in other Wolbachia oriC sequences, such as flanking genes tlyC and hemE , three DnaA binding sites, four IHF binding sites and one CtrA binding site ( D ). All PCR were performed on four independent DNA samples. Article Title: Poly(ADP-ribose) polymerase 1 regulates both the exonuclease and helicase activities of the Werner syndrome protein Article Title: Poly(ADP-ribose) polymerase 1 regulates both the exonuclease and helicase activities of the Werner syndrome protein

Figure Lengend Snippet: LASV NP exoribonuclease activity preferentially degrades dsRNA substrates. Various concentrations of purified full-length NP, C-terminal domain of NP ( NP-C ), and a catalytic mutant ( NP-D389A ) were incubated at 37 °C for 60 min with a 5′ 32 P-labeled 15-nt RNA oligo of either ss or ds forms (“Experimental Procedures”). The products were separated in a 17% urea-polyacrylamide gel and exposed to films. A representative gel of at least three independent experiments was shown.

Article Snippet: The used in the in vitro RNase assay, 5′-AGUAGAAACAAGGCC-3′, were chemically synthesized, and 5′ labeled with [γ-32 P]ATP using a T4 polynucleotide kinase ().