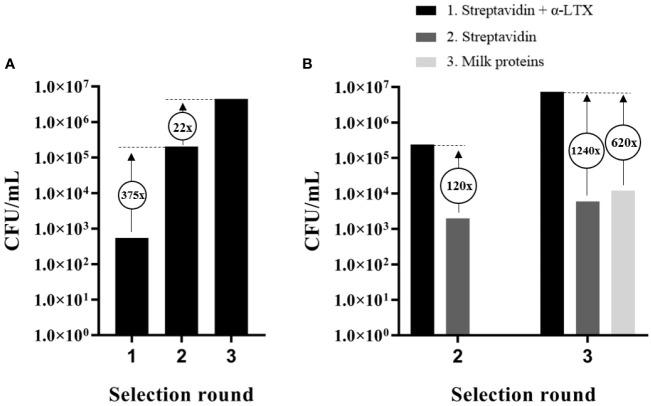 Figure Legend Snippet: Output and assessment of phage display selections against α-LTX. (A) Accumulation of scFv-displaying phages from the IONTAS phage display library λ with affinity to α-LTX over three rounds of selection. An increase in CFU/ml of 375-fold and 22-fold respectively were observed between the selection rounds. (B) CFU/ml was determined for output phages from selection round two and three for binding to either α-LTX, streptavidin, or milk proteins. An increase of 30-fold between the second and third selection round was observed in CFU/ml for the phages that bound streptavidin-captured α-LTX. Only few phages with affinity to streptavidin or milk proteins were accumulated compared to phages with affinity to α-LTX. 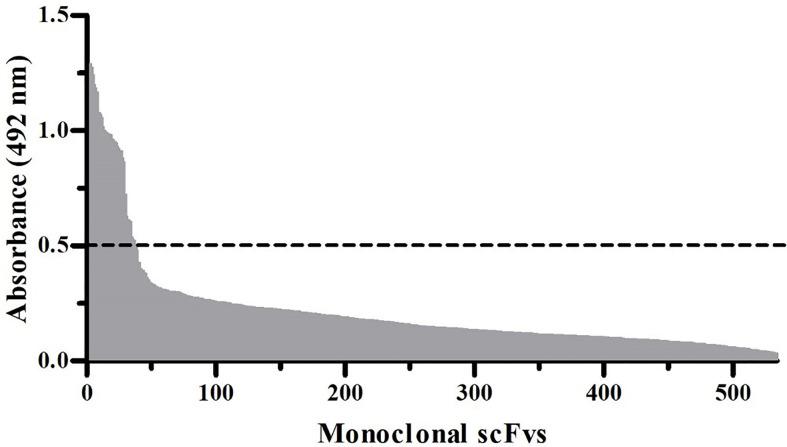 Figure Legend Snippet: Monoclonal scFv ELISA signals against α-LTX. In total, 534 scFv clones were expressed in solution and screened for their ability to bind directly coated α-LTX. scFvs displaying a binding signal above the cut-off absorbance value of 0.5 (dotted line) at 492 nm were considered hits.

Figure Legend Snippet: Monoclonal IgG ELISA signals against (A) α-LTX and (B) L. tredecimguttatus whole venom. The binding capability of TPL0020_02_G9 to α-LTX was assessed using different concentrations of IgG. The binding specificity was evaluated by testing the binding of the IgG to three controls (binding to milk proteins, streptavidin, and neutravidin) using the highest IgG concentration (2,000 ng/ml). Each column represents the average of triplicate measurements with error bars indicating the standard deviation. 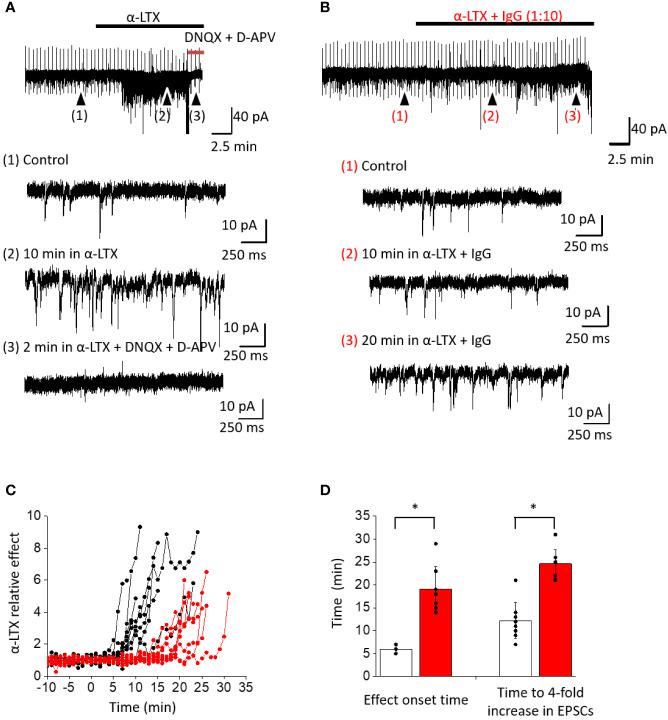 Figure Legend Snippet: Effect of α-LTX and its mixture with IgG TPL0020_02_G9 at 1:10 ratio (w/w) on spontaneous EPSC frequency in pyramidal neurons from mPFC. (A) Representative recording of α-LTX action. Time course of the experiment and expanded parts in control (1), after 10 min of α-LTX application (2), and after 10 μM DNQX and 100 μM D-APV application (3) are shown. α-LTX causes a strong increase of spontaneous EPSC frequency, and selective antagonists of ionotropic glutamate receptors abolish this effect. (B) Representative recording of α-LTX action in the presence of IgG TPL0020_02_G9. Strong frequency increase is seen only after 20 min of application. (C) Time development of α-LTX effect and its modulation by IgG. Spontaneous EPSC frequencies are normalized to the average control values. The development of effect is strongly delayed in the presence of IgG (red traces) compared to control with α-LTX alone (black traces). (D) Characteristic times when the 3 × SD threshold is reached or spontaneous EPSC frequency is increased four-fold for α-LTX alone (white bars) and in the presence of the IgG (red bars). The differences are significant (p < 0.05, unpaired t-test).