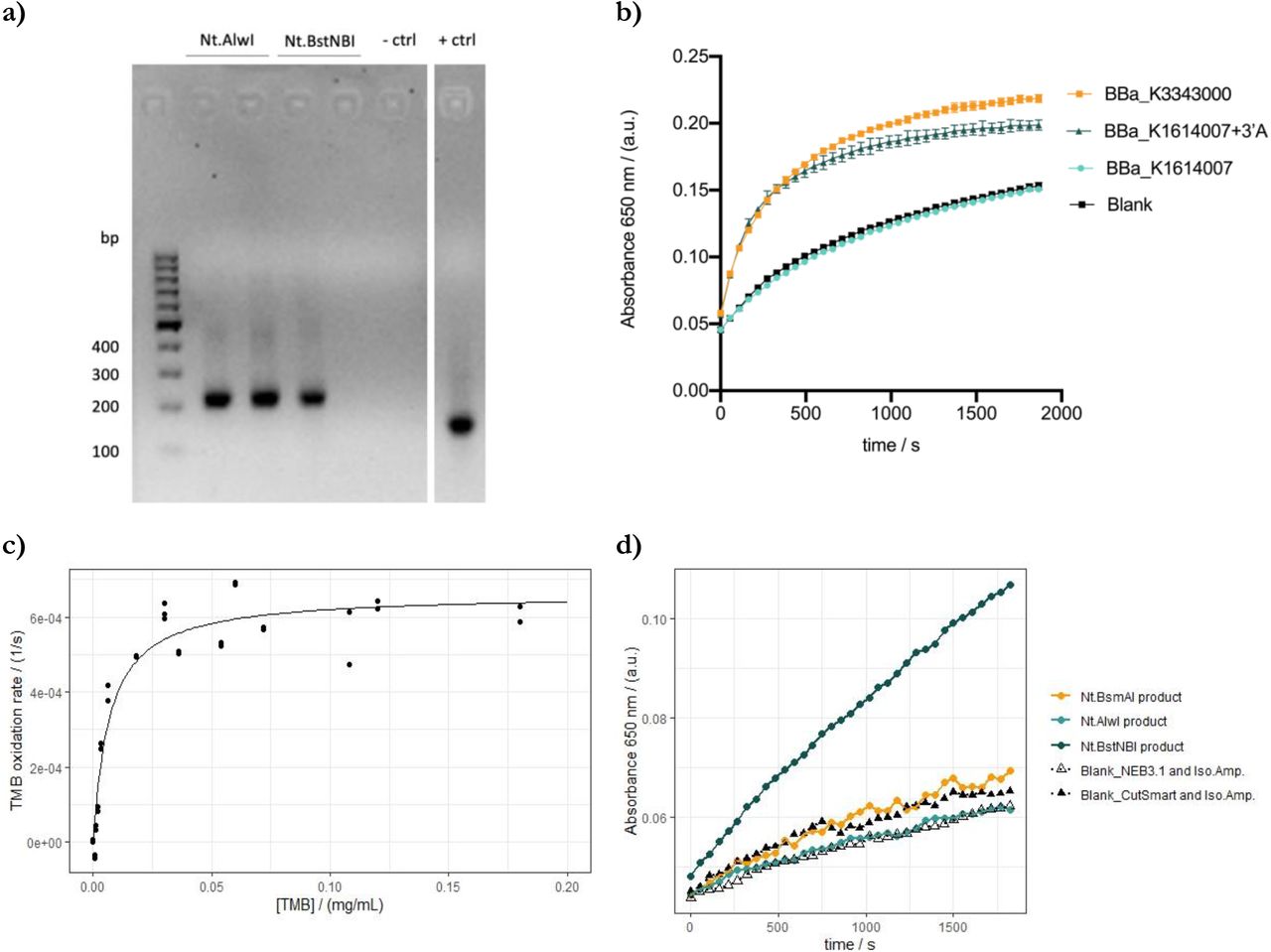 Figure Legend Snippet: Confirmation of RPA, GQ-catalysed TMB oxidation and LSDA reactions. a) RPA with SC1 forward and reverse primers containing Nt.AlwI or Nt.BstNBI recognition site . Each reaction was performed using genomic S. cerevisiae BY4741 DNA as a target sequence. The target sequence is absent in the negative control. The positive control was performed with the primers and target templates provided by the TwistAmp Basic kit (TwistDx). b) Average TMB oxidation rate of different GQ DNAzyme sequences. Here, the catalytic activities of EAD2+3’A, BBa_K1614007, and BBa_K1614007+3’A GQ DNAzymes (Table S2) in pH 6.0 phosphate buffer were compared. The concentration of DNAzyme was kept at 1 μM in all measurements. EAD2+3’A was identified as the most potent DNAzyme in catalysing TMB oxidation. The error bars represented the standard deviation of three replicates. c) TMB oxidation by EAD2+3’A DNAzyme. Kinetic parameters of the DNAzyme were measured based on its ability to catalyse TMB oxidation reaction at different TMB concentrations. In the figure, data points represent initial oxidation rate measured from each experimental replicate while the curve represents model-predicted kinetics at each given TMB concentration. Rate kinetics of EAD2+3’A were assumed to follow Michaelis-Menten kinetics. The initial rate of each individual replicates was calculated based on differences in oxidized TMB absorbance value at 650 nm for the first minute of the observation. The resulting model could sufficiently describe each individual replicate measurement (Fig. S1). d) GQ DNAzyme production using LSDA reaction. LSDA was performed using different nickases. Here we identified Nt.BstNBI as the most potent GQ-producer. Synthetic (pure) oligonucleotides (Table S3) containing the targeted S. cerevisiae genome, nickase site and EAD2+3’A DNAzyme sequences were used as template for the LSDA reaction. The figure shows the average of two replicates. Figure Legend Snippet: Constructing ssRNA topological structures with the junction-based method. ( a ) Preparation of the ssRNA strand with uniform ends and proper end groups for the DNA-splinted RNA ligation. ( b ) Both the positive ( TK j ( + )) and negative ( TK j ( − )) RNA trefoil knots of the same sequence are constructed by configuring tensegrity triangles with different handedness. The same scaffolds (blue) are threaded by different staple sets (grey or purple) to form a 17-bp-edged right-handed tensegrity triangle for the positive trefoil knot, or a 14-bp-edged left-handed tensegrity triangle for the negative one, respectively. Each topology is designated by the Alexander–Briggs notation n i or , where n is the minimal number of nodes, C is the number of components (for links), and i distinguishes different topologies with the same n and C . ( c ) dPAGE analysis of TK j ( + ) (lanes 1 and 2), TK j ( − ) (lanes 3 and 4), and their circular ( C j , lanes 5 and 6) and linear ( L j , lanes 7 and 8) counterparts. Lanes 2, 4, 6 and 8 contain samples digested by RNase R. ( d ) The assembly complex for the hybrid BR contains tensegrity triangles of both handedness to generate three positive nodes plus three negative nodes. ( e ) Topological analyses of the hybrid BR. Lane 1, gel-purified BR; lanes 2–6, BR treated by RNase H, Nt.AlwI (for cleaving the red ring), Nt.BspQI (for cleaving the green ring), DNase I, and E. coli DNA Topo I; lanes 7 and 8, DNA and RNA references of the three individual components. During the purification of BR, the breaking down of the 95-nt circular RNA component is unavoidable, and a portion of BR falls apart as a result. The treatment of BR by RNase H, Nt.AlwI and Nt.BspQI is conducted in the presence of an assisting DNA strand complementary to the corresponding ssRNA or ssDNA ring. LX and CX represent X-nt linear and circular species, respectively. In all the gels, lane M contains the DNA size markers.

3) Product Images from "Meiotic association between Spo11 regulated by Rec102, Rec104 and Rec114" Figure Legend Snippet: Detection of SSBs in the GAL2 UAS region. ( A ) Detection of SSBs by S1 nuclease. Plugs containing genomic DNA from wild-type cells were directly equilibrated in restriction digestion buffer and treated with NcoI and XbaI. Genomic DNA recovered from the melted plugs was then incubated in the presence (lanes designated +) or absence (lanes designated −) of S1 nuclease. Numbers above the panels are culture time (hours) in SPM. The diagram is labeled as for Figure 5 . ( B ) Schematic diagram of SSB detection in rad50S strains using denaturing polyacrylamide gel. Nt.AlwI introduces an SSB into specific sequences of DNA (5′-GGATCNNNN/N-3′). The GAL2 promoter has the sequence only on the + strand. Probes A and B were labeled by multiple round primer extension in the presence of radio-labeled dCTP. ( C ) and ( D ) Detection of SSBs on the −/+ strand by using strand-specific probes. All strains are homozygous for the rad50S allele. After genomic DNA was prepared from the meiotic cells at the indicated times (hours), it was treated with AccI and BspHI. The right two lanes in each panel contain 5% DNA fragments, which were further digested with HhaI or Nt.AlwI. Strains used were YHS363, YHS397, YHS427 and YHS514.