Article Snippet: For selection of only capped RNA molecules, poly(A)-enriched RNA was dephosphorylated on beads using (CIP, ) according to manufacturer's protocol. 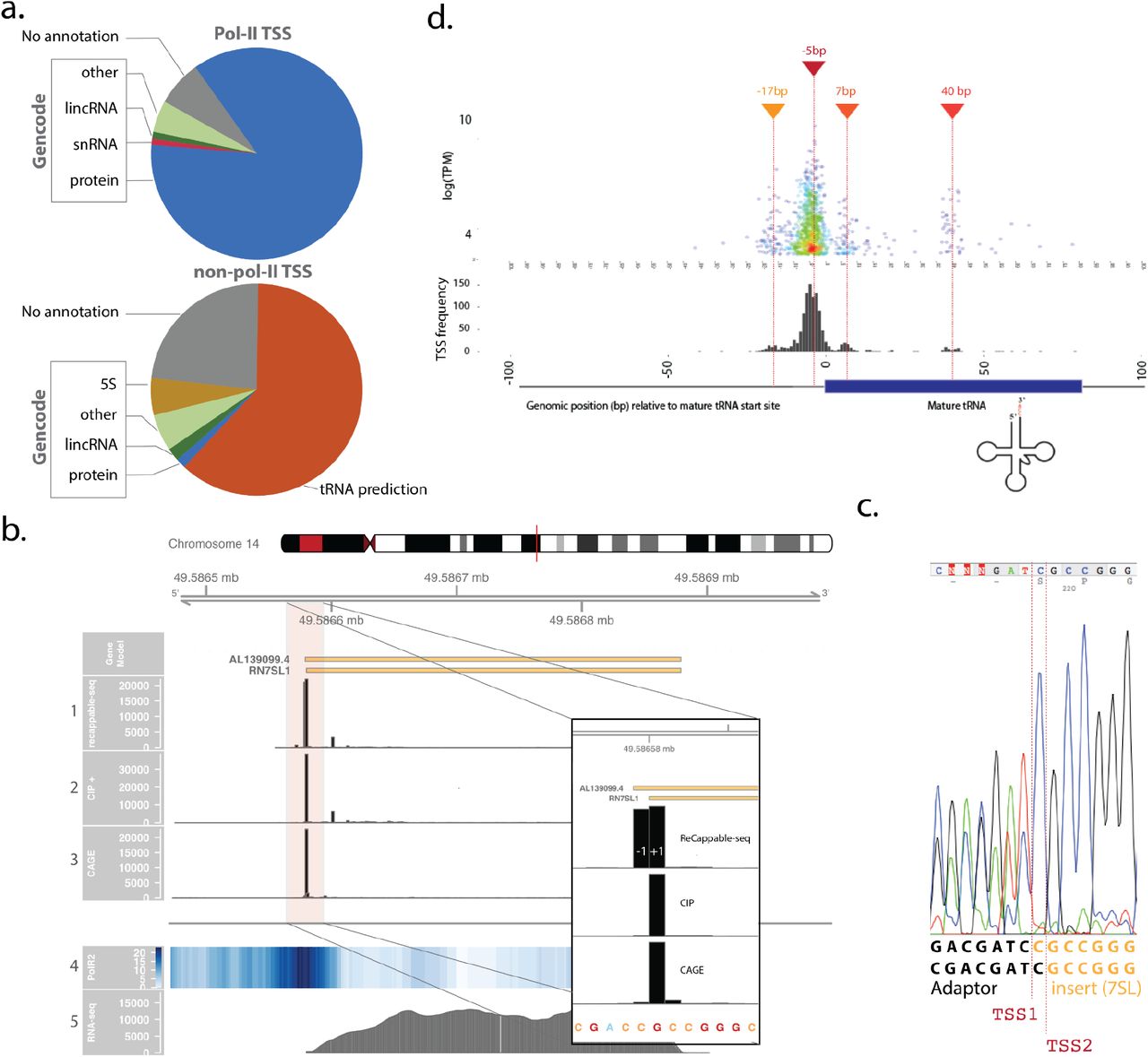 Figure Lengend Snippet: a. Pie charts representing the proportion of TSS associated with GENCODE genes, predicted tRNAs (orange) or not associated with any annotation (grey) for Pol-II (upper chart) and non-Pol-II (lower chart). b. 7SL (RN7SL1) locus showing the distribution of the 5’ end of mapped reads for Recappable-seq (track 1), CIP treated Recappable-seq (track 2) CAGE (track 3), Pol-II ChIP-seq (track 4, read density) and RNA-seq reads (track 5). The floating panel represents a close up of the 5’ end of the RN7SL1 with two TSS at -1 and +1 of the annotated RN7SL1. The 5’ mapped end of the reads is shown for Recappable-seq (track 1), CIP treated Recappable-seq (track 2), and CAGE (track 3) to mark the TSS positions. c. Validation of the two TSS identified for 7SL using RACE. The amplified fragments were directly sequenced using sanger sequencing with a primer located in the 7SL gene (Material and Methods). The sequencing trace reveals two products ligated to the RACE adaptor resulting from two alternative transcript starts corresponding to TSS1 and TSS2. d. Non-Pol-II TSS flanking tRNA annotations. The top panel visualizes individual non-Pol-II TSS relative to the 5’ end of the annotated mature tRNA (in bp) as a function of the TPM. The bottom panel represents the distribution of the non-Pol-II TSS relative to the start of the annotated tRNA starts (in bp). 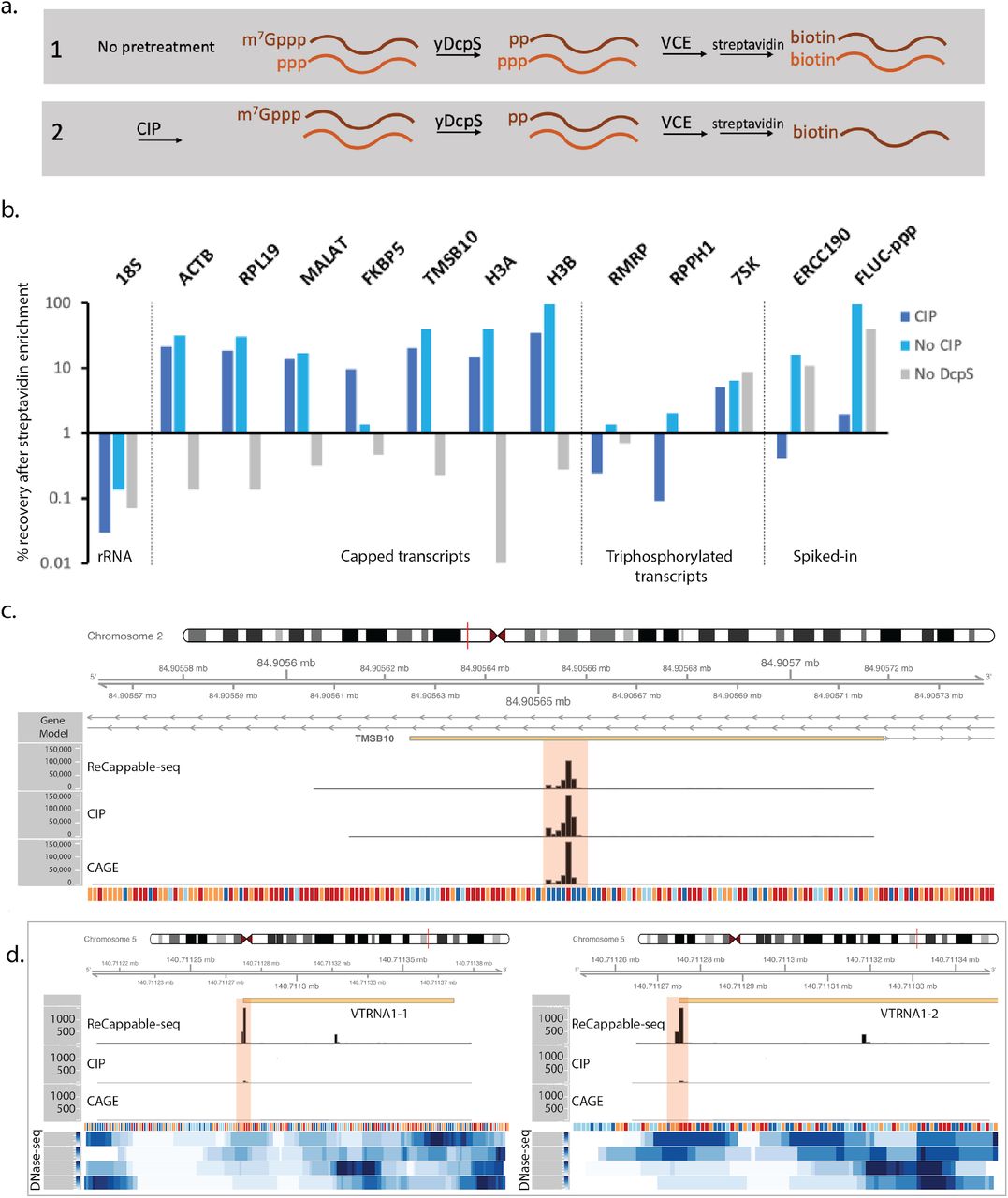 Figure Lengend Snippet: ReCappable-seq. a. Principle of ReCappable-seq. 1. RNA is subjected to decapping with yDcpS which acts on capped transcripts originating from Pol-II transcription. Subsequently, the RNA is capped with a biotin-modified GTP analog (3’-desthiobiotin-GTP) using VCE. This biotinylation step allows enrichment of all primary transcripts on a streptavidin matrix. 2. Differentiation of Pol-II from the non-Pol-II transcripts is accomplished by sequencing a second library constructed with RNA treated with CIP prior to the yDcpS treatment, in order to remove the 5’ triphosphate from non-Pol-II transcripts.b. RT-qPCR assay measuring the recovery after streptavidin enrichment of various classes of transcripts such as 18S rRNA as an example of a processed transcript (rRNA), ACTB, RPL19, MALAT (MALAT1), FKBP5, TMSB10, H3H (HIST1H3H) and H3B (HIST1H3B) as examples of capped transcripts, RMRP, RPPH1 and 7SK (RN7SK) as examples of Pol III transcripts (with 7SK having a 5’ methylated triphosphate and therefore resistant to CIP treatment, see main text) and ERCC190 and FLUC-ppp as examples of spiked-in in vitro transcripts with a defined triphosphorylated 5’ end. c. Example of a Pol-II TSS in the TMSB10 locus: the same positions (shaded in pink) are found in the CAGE dataset. CIP treatment intensifies the signal, consistent with a Pol-II TSS. d. Example of Pol-III TSS corresponding to the start of two vault RNAs (vault RNA 1-1 and vault RNA 1-2) located on Chr.5. The positions (shaded in pink) are missing in the CAGE dataset. CIP treatment reduces the signal, consistent with non-Pol-II TSS. In c. and d. the tracks correspond to ReCappable-seq, CIP-Recappable-seq, CAGE, and RNA-seq (A549 rRNA-depleted RNA-seq) read coverage. The four bottom tracks correspond to read density from public ENCODE DNase-seq from A549 cells (ENCFF473YHH, ENCFF809KIH, ENCFF821UUL, ENCFF961WXW). Figure Lengend Snippet: Library preparation of the targeted enrichment protocol. A schematic overview of the library preparation to enrich a target region (blue). Freshly isolated HMW genomic DNA was dephosphorylated by incubation with CIP for 20 min at 37°C. Subsequently, selected pools of RNPs ( Supplementary Tables 1, 2 ) were added to aliquots of the dephosphorylated gDNA, and incubated for 60 min at 37°C in the presence of Taq polymerase and dATP, followed by incubation for 5 min at 72°C. The available phosphate groups at the terminus of the targeted region were ligated to Nanopore adaptors during incubation with T4 ligase for 60 min at room temperature (RT). The adapter-ligated aliquots were pooled, followed by clean-up with 0.3X AMPure beads. The eluted sample was loaded on a flowcell for Nanopore sequencing. 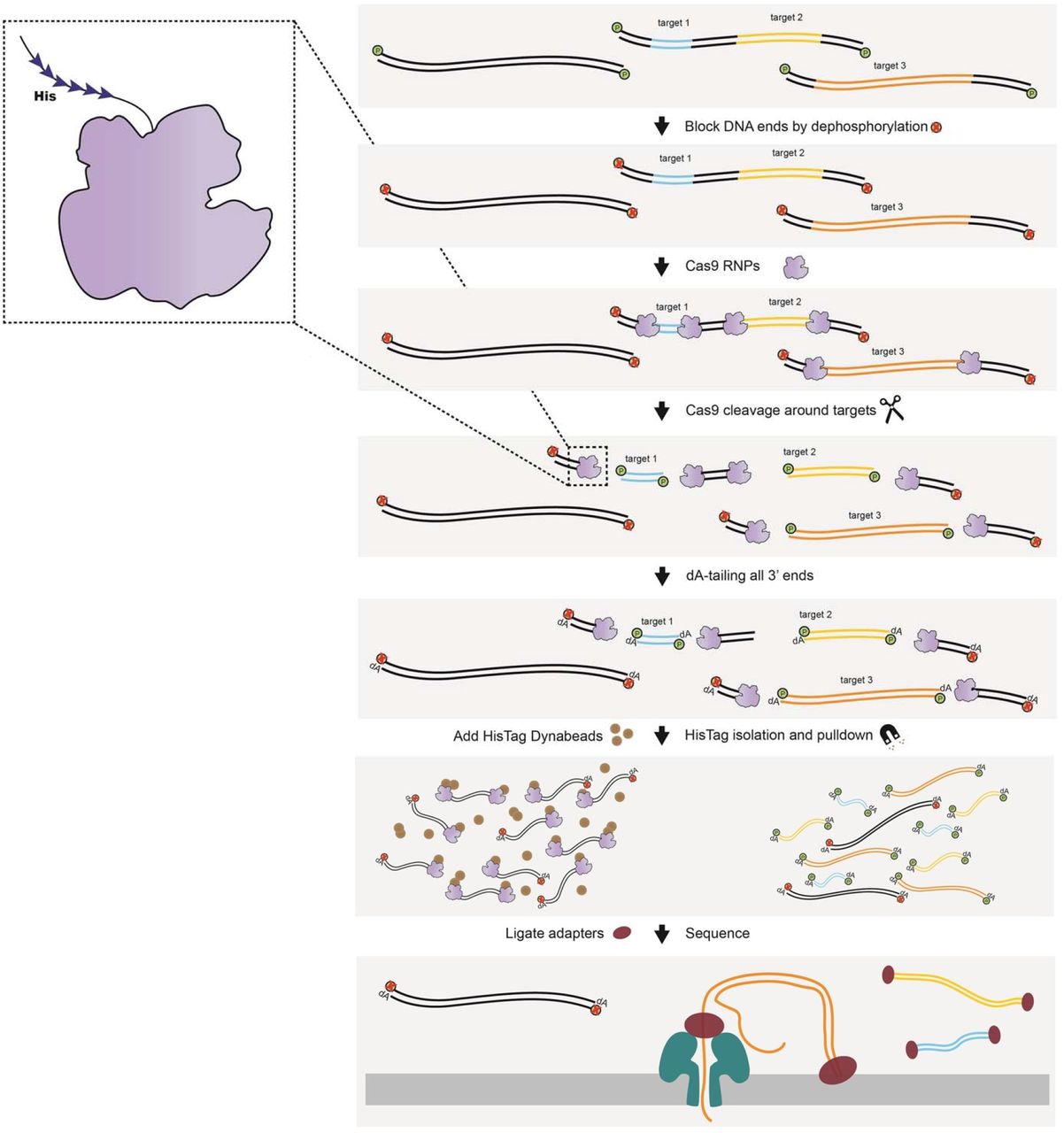 Figure Lengend Snippet: Affinity-based Cas9-Mediated Enrichment (ACME) Workflow. ACME aliows for the targeting of multiple regions of interest within the same reaction with single target read lengths as large as 1Oūkb. For ACME, individual samples starting with 5μg HMW DNA are prepped as follows: - Dephosphorylation: 5’ ends of DNA are dephosphorylated to prevent the ligation of sequencing adapters to non-target strands. - Cas9 binding and cleavage: Target specific crRNAs are bound with tracrRNA to form Cas9 RNPs. These RNPs cleave at either end of the targets, revealing blunt ends with now ligatable 5’ phosphates. After cleavage, the Cas9 enzyme stays bound to the PAM distal end on the non-target flanks, protecting those 5’ ends from adapter ligation. - dA-tailing: All 3’ ends of DNA are dA-tailed to prepare the blunt ends for sequencing adapter ligation. - HisTag isolation and pulldown: The Cas9 enzyme used for cleavage has a 6-Histidine tag at its C-terminal end (inset). Using His-Tag Dynabeads™ we isolate and pulldown Cas9 and the non-target DNA bound to it, thereby reducing background non-target reads. - Adapter ligation and sequencing: Adapters are ligated to either side of the targets and the resultant Cas9 enriched library is loaded onto the flowcell for sequencing.