Figure Legend Snippet: Population genetics analysis of epiRNA-associated RNA editing events. Extent of selective constraints for epiRNA-associated editing events was evaluated as described in Materials and Methods . The distribution of SNP densities ( A ), SNP nucleotide diversity ( B ), and the frequency spectra of derived allele ( C ) in the local regions of epiRNA-associated focal editing sites were determined and quantitatively represented as boxplots or means ± SD, with the more distal regions (Upstream and Downstream) as the references. ( D ) The nucleotide diversity of epiRNAs, their flanking regions (Upstream and Downstream), and a group of 10,000 randomly selected piRNAs in piRNA clusters are shown in boxplots. Of note, the same measurements for all synonymous and nonsynonymous sites were calculated as references, with the median values denoted by the blue and red dotted lines, respectively. All P values were derived from Wilcoxon one-tailed test. Figure Legend Snippet: Experimental verification of epiRNAs. ( A , B ) For two selected epiRNA candidates, the deep sequencing raw data as well as the Sanger sequencing results corresponding to the genome, mRNA and small RNA in the macaque animal (100MGP-001) testis sample are shown. The detected editing sites are highlighted by black box (in deep sequencing) or red arrows (in Sanger sequencing). Figure Legend Snippet: Interaction of RNA editing and piRNA biogenesis. ( A ) The plot shows the percentages of epiRNAs and mRNA degradation fragments with the nucleotide uridine at the 5′-end of the respective sequences. ( B ) Heatmaps showing the relative expression levels across seven different macaque tissues for long transcripts (left) and small RNAs (right) corresponding to the epiRNA-associated regions, with reference to the color scale on top. ( C ) The differences in ADAR expression levels and normalized piRNA tag types across four different animals are shown in linear graphs on the left. The heatmap on the right depicts the relative expression levels of piRNAs in each piRNA cluster of the four animals, organized and scaled in rows. These piRNA clusters were categorized into three groups: epiRNAs-expressing clusters (yellow), “editing-absent” epiRNA clusters (overlapping with editing sites on the long transcripts but lack detectable epiRNAs; orange), and canonical piRNA clusters (red), as indicated by the color bar on top. 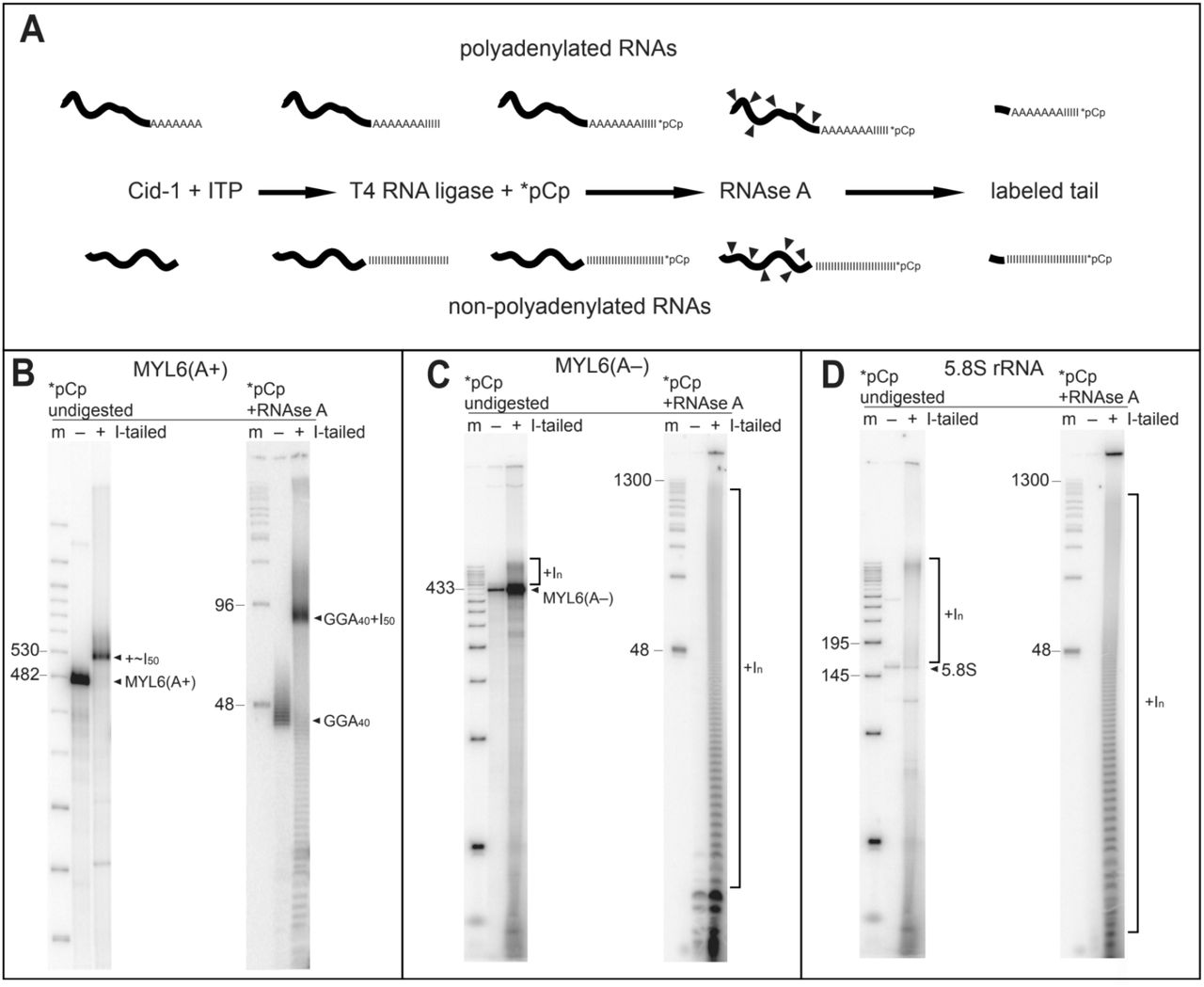 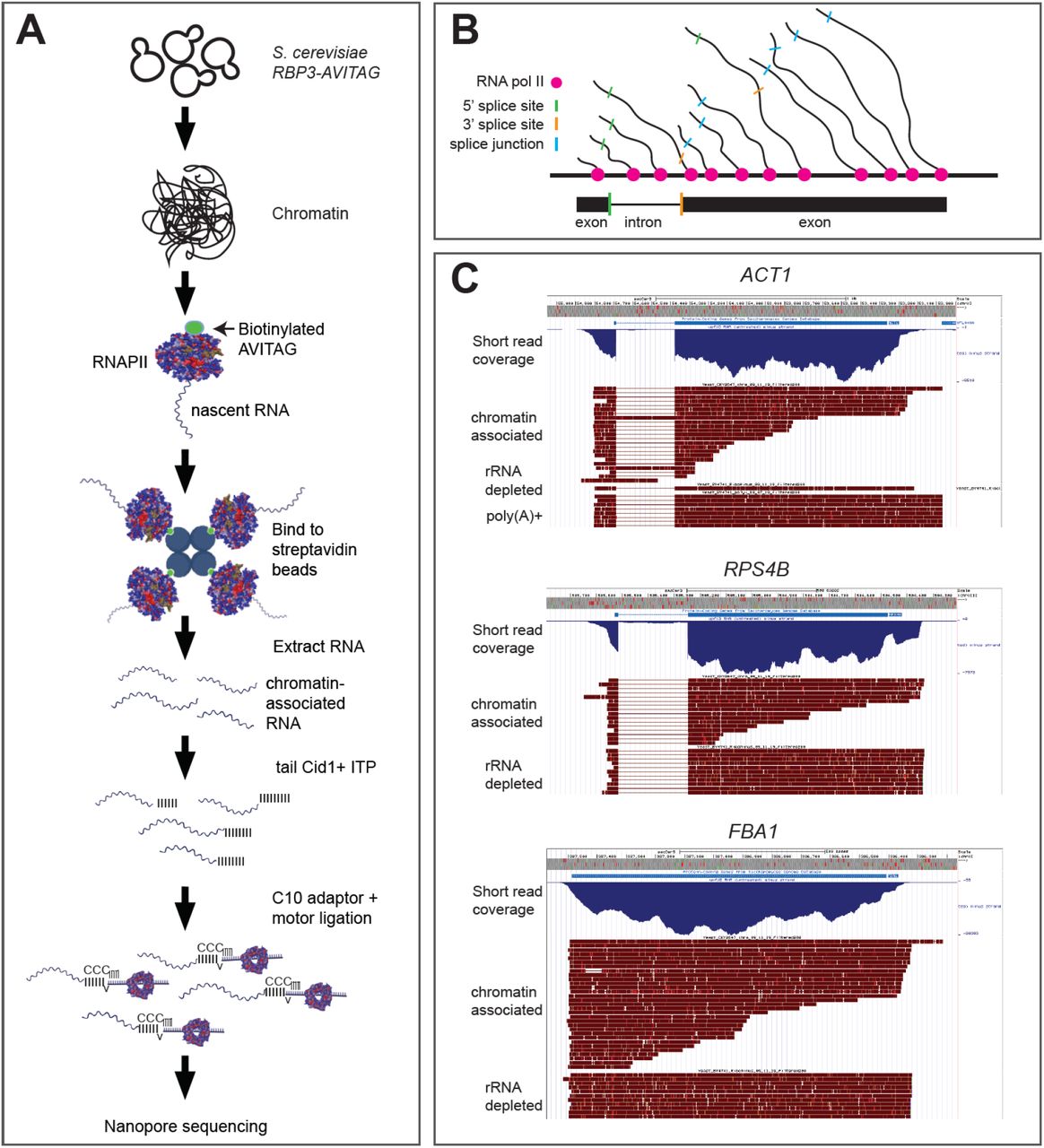 Figure Lengend Snippet: Capture and analysis of RNA polymerase II (RNAPII) associated nascent transcripts by Cid1 I-tailing. A. Protocol for isolating RNAPII-associated transcripts from chromatin (see methods). B. A model for co-transcriptional splicing. Introns bounded by 5’ splice sites (green) and 3’ splice sites (gold) are removed creating exon-exon junctions (blue) in nascent transcripts as RNAPII (magenta) moves down the gene. C. genome browser views of nanopore reads mapping to ACT1 (top), RPS4B (middle), and FBA1 (bottom). The 3’ ends of reads from nascent RNAs are distributed along the gene, and splicing usually occurs before RNAPII has moved 100 nt beyond the 3’ splice site. 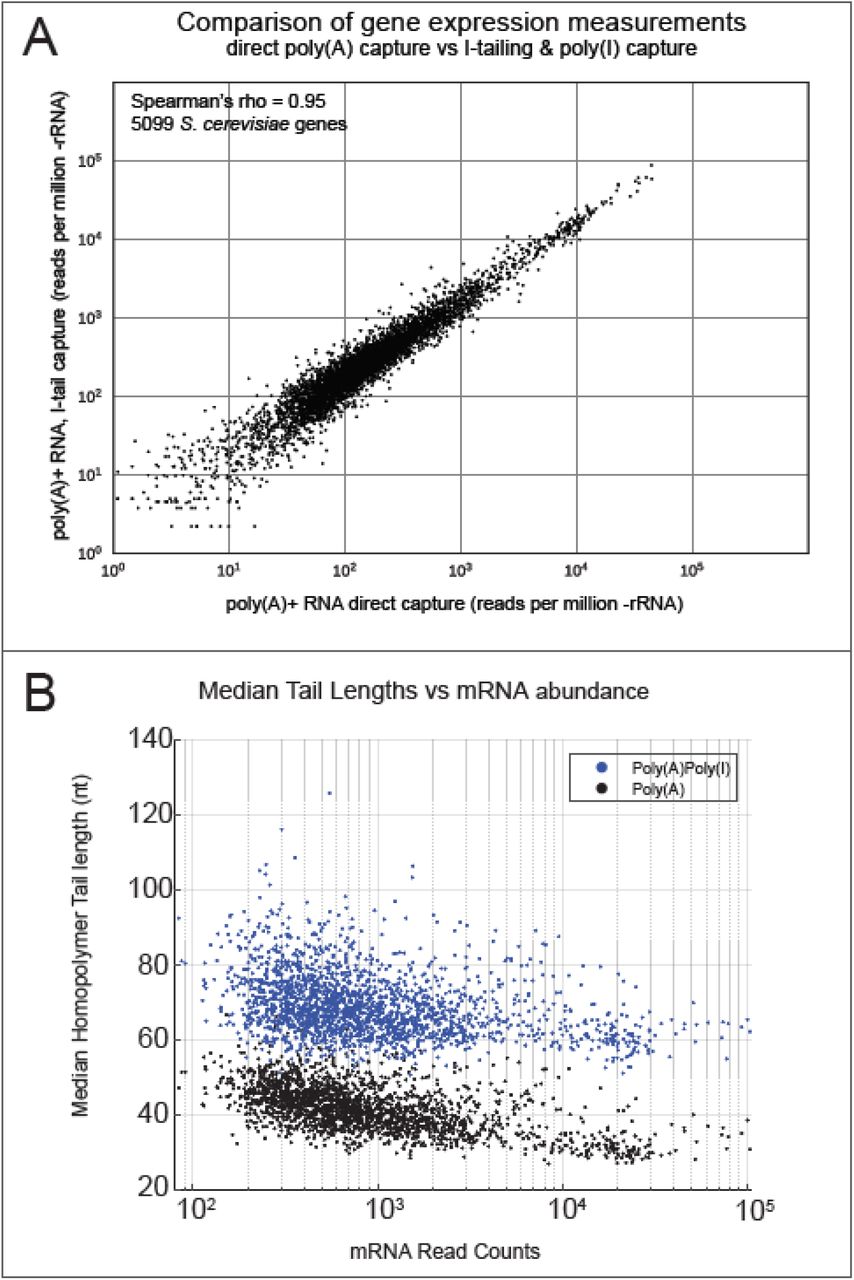 Figure Lengend Snippet: Quantitative evaluation of yeast mRNA detection after I-tailing. A. Strongly correlated abundance measurements for > 5000 yeast mRNAs using either standard poly(A)+ capture or I-tailing by Cid1 and capture with the oligoC adapter. B. Estimation of median tail lengths by Nanopolish of poly(A)+ mRNAs using direct capture of poly(A)+ with the standard oligo(dT) adapter (black) or after tailing and capture with the oligoC adapter (blue). The version of Nanopolish used here has only been trained to distinguish and measure poly(A) tails (see text). 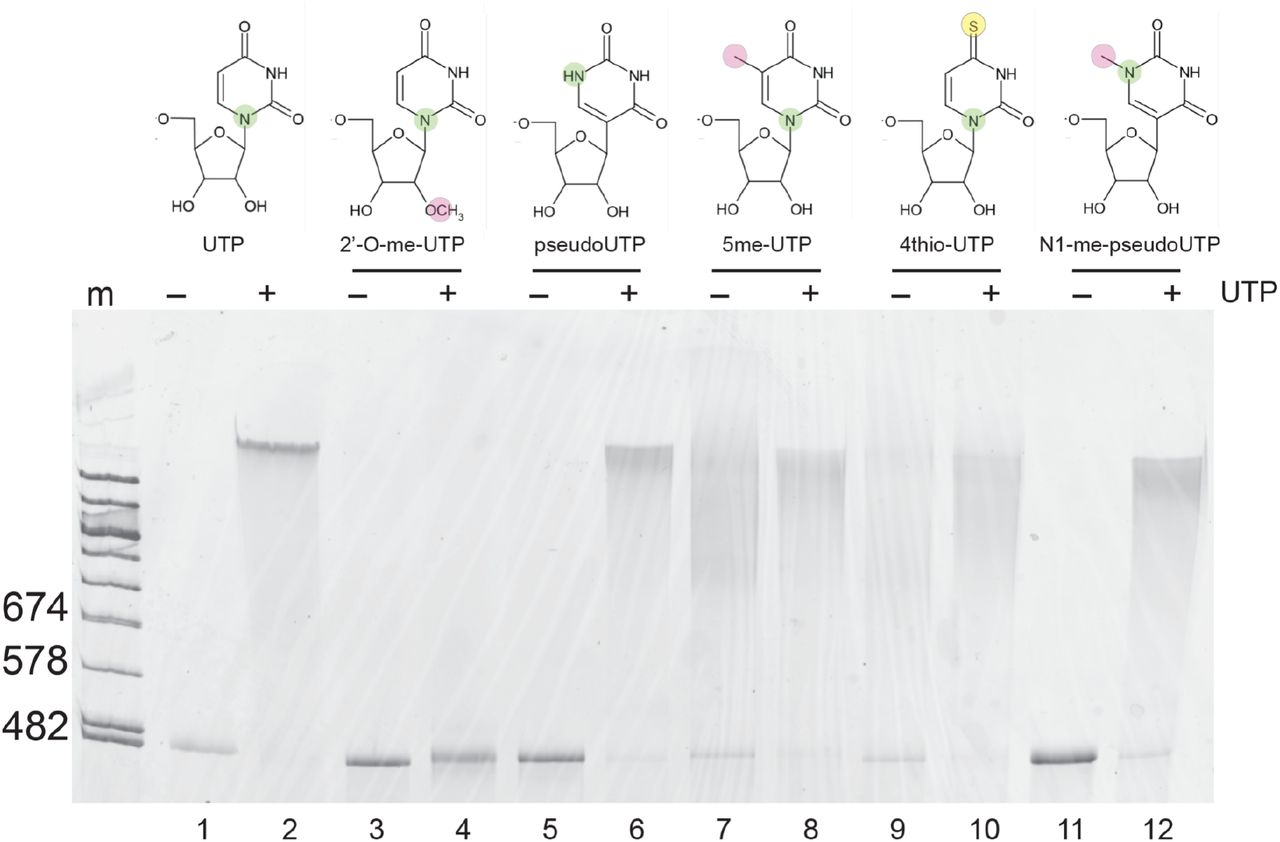 Figure Lengend Snippet: Ability of Cid1 to use modified UTP analogs for tailing. Cid1 tailing reactions were set up with the indicated analog either without (-, 1mM) or with (+, 0.5 mM each) competing unmodified UTP, using the MYL6(A+) model mRNA as a substrate. The 6% denaturing polyacrylamide gel was stained with SYBR Gold and imaged on a Typhoon Imager. 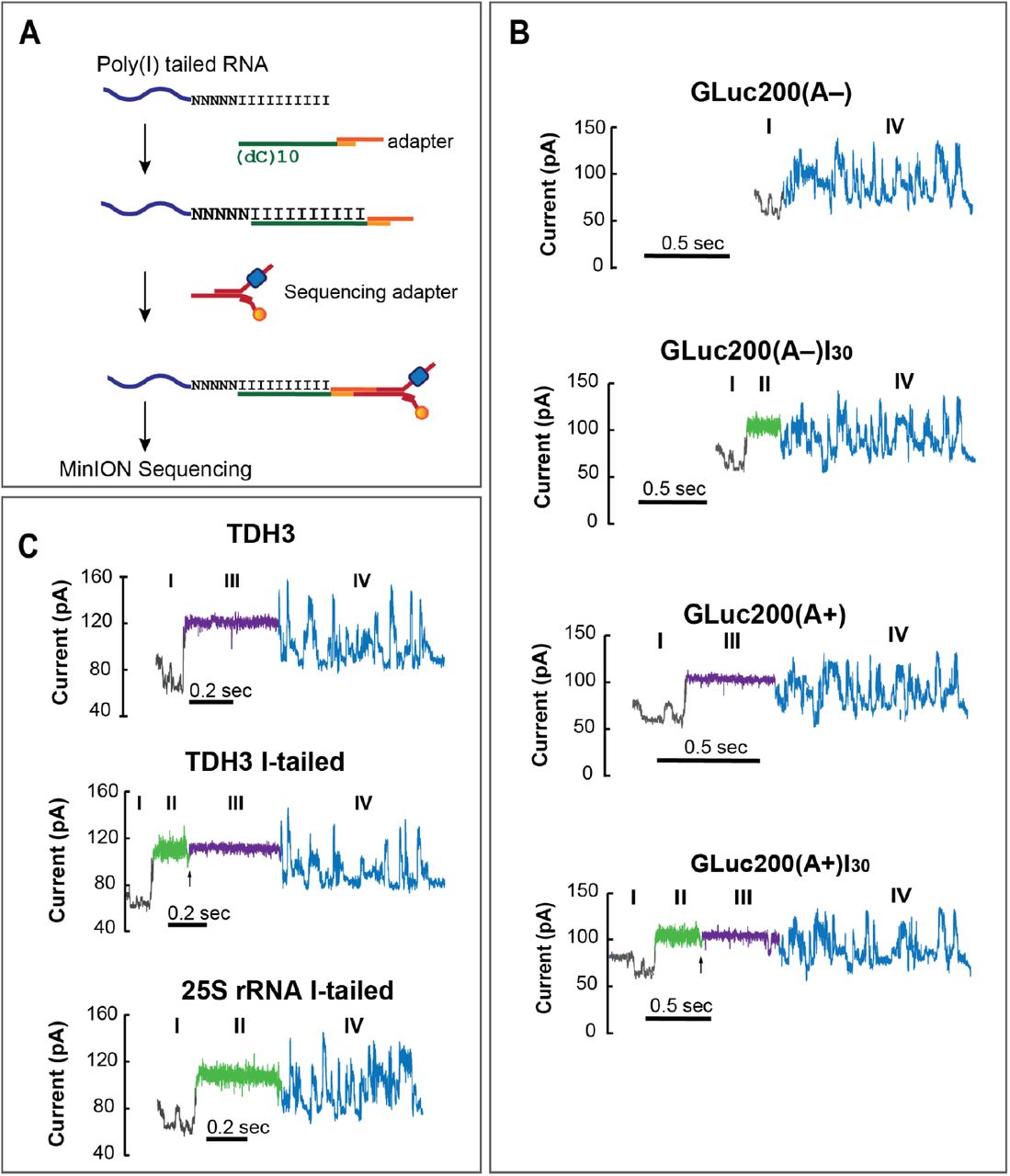 Figure Lengend Snippet: Nanopore ionic current signals for poly(I)-tailed RNA molecules. A. Schematic for Nanopore adaptation of poly(I)-tailed RNA molecules. This step employs a poly(dC)10 oligomer that anneals to the terminal 10 nucleotides of the added inosine tail. B. Ionic current traces produced by the GLuc200 model mRNA (IV, blue) with or without a poly(A) tail (II, green) and with or without a ligated 30 nt segment of inosine (III, purple). Adaptor sequence trace is shown in gray (I). RNA molecules enter the pore 3’ end first, so the trace records transit through the pore in the 3’ to 5’ direction. C. Ionic current traces produced by translocation of native yeast TDH3 mRNA or 25S rRNA, with or without I-tailing by Cid1. Segments are colored as in ( B ). 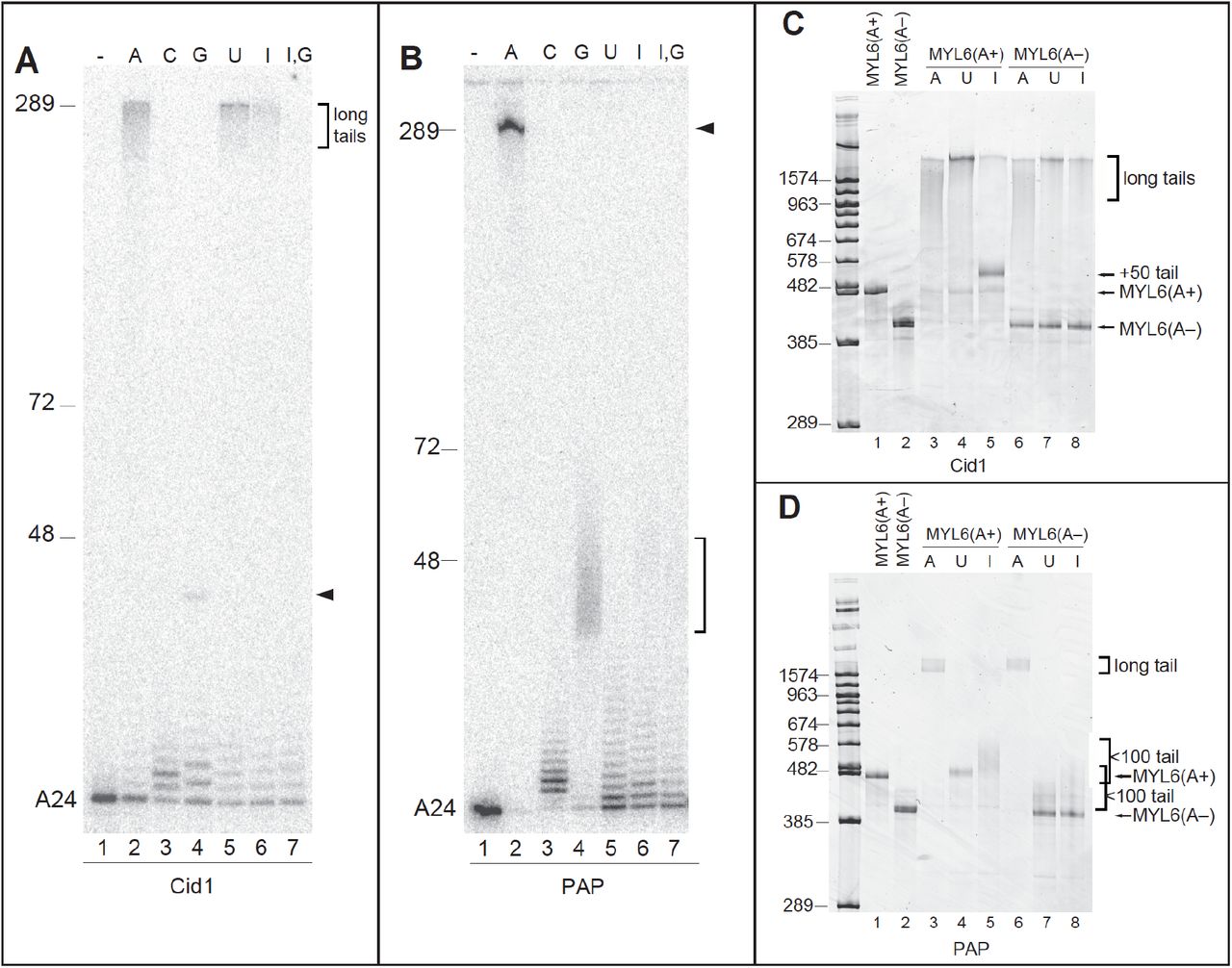 Figure Lengend Snippet: Nucleotide-adding activity of S. pombe Cid1 and S. cerevisiae Poly(A) polymerase (PAP) on various model RNA substrates. RNA was incubated with enzyme and rNTPs as indicated and run on denaturing polyacrylamide gels, stained with SYBR Gold and imaged on a Typhoon scanner. Markers are DNA with the indicated chain lengths for the equivalently migrating RNA, using the ~1.04X greater mass to charge ratio of RNA per residue. For example, a 500 nt DNA marks the approximate migration of a 482 residue RNA. A. Cid1 adds long tails of A, U, or I, but much shorter tails of C or G to A24. B. PAP adds long tails of A, a 35-50 nt stretch of G, but only short stretches of C, U, or I to A24. C. Cid1 efficiently adds long stretches of A or U, but mostly just 50 residues of I to a model poly(A)+ mRNA, whereas it inefficiently adds A, U, or I to a non-polyadenylated RNA. D. PAP efficiently adds A to either polyadenylated or non-polyadenylated RNA (lanes 3 and 6) and adds a short stretch of I to poly(A)+ RNA, but only inefficiently adds U or I to non-polyadenylated RNA. 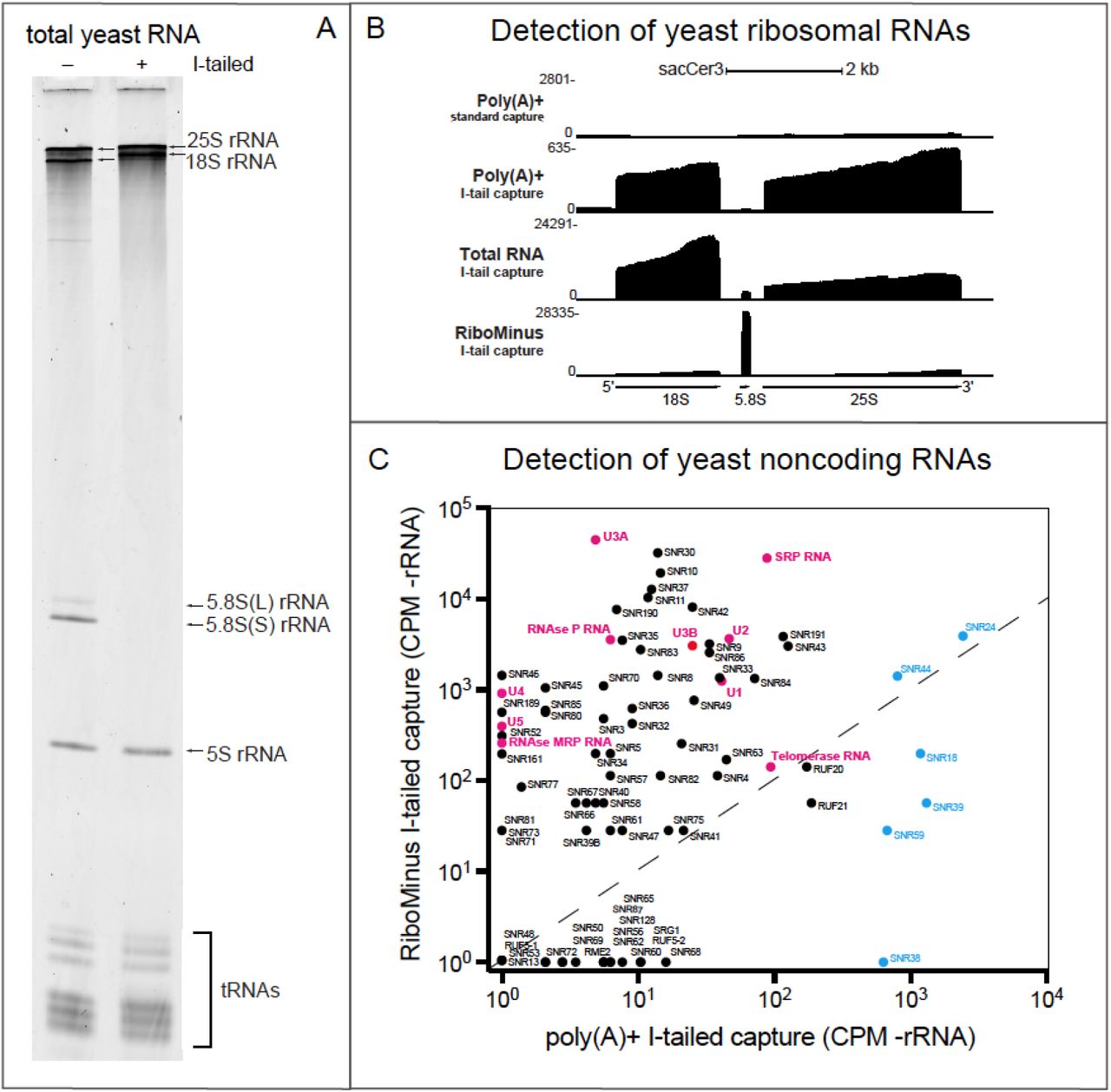 Figure Lengend Snippet: RNAP bypass by mRNA takeover is reduced as the complexity of CO replication-transcription collisions increases. ( A ) Replication reaction mixtures on template CO100 containing [α- 32 P]GMP-labeled 19mer-RNAP (lanes 1–4), 100mer RNAP (5–8), and RNAP arrays (9–12) were incubated for the indicated times with or without E. coli replication proteins except DnaA (rep. pro.) and with or without DnaA. The products were analyzed by electrophoresis through a composite 5%/20% 7 M urea polyacrylamide gel. ( B ) Fraction of the labeled RNA extended by mRNA takeover on the gel shown in panel A. ( C ) mRNA takeover (%) relative to the extent of replication measured by [α- 32 P]dAMP incorporation in independent replication reactions using the same RNAP template preparations as in panel A. Replication efficiency averaged 34 ± 12% (1 min)—52 ± 15% (8 min) for the 19mer; 36 ± 21% (1 min)—51 ± 25% (8 min) for the 100mer; and 30 ± 8% (1 min)—45 ± 12% (8 min) for the RNAP array ( n = 4, mean ± standard deviation). ( D ) Assay protocol to estimate RNAP displacement by active DNA replication. ( E ) Ratios of β′ and α RNAP subunit signal intensities from western blots (replicated/unreplicated) in reactions before and after gel filtration in high salt compared to the RNAP subunit ratio predicted for active RNAP dissociation by replisome bypass ( n = 3, mean ± standard deviation). A more detailed analysis of one of the experimental repeats is shown in Supplementary Figure S3 . Gray ovals, RNAP. Figure Lengend Snippet: Immunofluorescence of differentiated HBE cells infected with HRV-C651 or HRV-C15. Immunofluorescence with the rabbit polyclonal anti-HRV-C VP1 protein-antibody only ( A ) and mAbJ2 antibody ( D ). At 24 h post-inoculation with HRV-C651 or HRV-C15, the HBE cells were fixed, followed by incubation with VP1 protein-antibody ( B and C ) and mAb12 antibody detecting double-strand RNA ( E and F ). The red region indicates VP1 protein ( B and C ) or the double-stranded RNA of HRV-C ( E and F ). Confocal images were taken with a magnification of 200×. Nuclei were stained with DAPI

Article Snippet: The two plasmids, Lz651 and PC15, containing HRV-C viral genome were digested to linearize using Endonuclease Cal I (), followed by with a MEGAscript® T7 Transcription Kit (Ambion) in accordance with the manufacturer’s instructions.

Article Snippet: The two plasmids, Lz651 and PC15, containing HRV-C viral genome were digested to linearize using Endonuclease Cal I (), followed by with a MEGAscript® T7 Transcription Kit (Ambion) in accordance with the manufacturer’s instructions.