Figure Legend Snippet: CANTRIP can be performed in a two-step reaction without Cas12a heat inactivation. Pre-incubation time with the Cas12a enzyme, before TdT addition, was 60 or 0 min after which the Cas12a reaction mix was heat inactivated at 70°C or not. Subsequent incubation time with TdT was 3 h. Bars represent the mean of two technical duplicates of an experiment and the corresponding differences between these two experiments. Figure Legend Snippet: PAM usage of Lb, Lb2, and Lb2-KY (A) A diagram outlining the mammalian-cell PAM identification assay used in subsequent panels. A library of randomized 5′-NNNNNN-3′ PAMs preceding a crRNA target was stably expressed in HEK293T cells. Plasmids encoding Cas12a proteins, crRNAs, and the fluorescent marker mCherry were transfected to these cells. Cells were sorted for mCherry expression, and a region containing the randomized PAM and the target sequence was deep-sequenced with paired-end reads of 300 base pairs. Indel frequencies were then calculated for each four-nucleotide PAM. Note that the first two nucleotides of the 6-mer randomized PAM sequence had no detectable impact on the activities of any Cas12a variant. (B) Heatmaps showing the result of mammalian-cell PAM screen for Lb2Cas12a, Lb2-KY, LbCas12a, and cells lacking a Cas12a ortholog (control). PAMs and the related editing efficiencies were pooled by the first three nucleotide positions. Each heatmap indicates an average of two or three independent replicates. The range of replicates for each 3-nucleotide PAM sequence is less than 10% of the signal at each position. (C) An expansion of the data generated in (B), except that all 64 four-nucleotide PAMs are plotted. The range of replicates for each 4-nucleotide sequence is less than 25% of the average signal for each four-nucleotide PAM. Figure Legend Snippet: Lb2Cas12a efficiently cleaved mammalian genomes at both integrated and endogenous targets (A) A phylogenetic tree generated by Phylo.io based on an alignment of Cas12a orthologs of the indicated species. 21 , 22 (B) A representation of the indicated Cas12a orthologs with domains indicated. WED: crRNA binding and processing domains, split by REC and PI domains into WED-I, II, and III (green). REC: DNA binding domains REC1 and REC2 (gray). PI: PAM-interacting domain (orange). RuvC: DNA cleavage domains, split by BH and NUC domains into RuvC-I, II, and III (blue). BH: bridge helix (light green). Nuc: DNA processing domain (red). Number at right indicates the number of amino acids of each ortholog. (C) A diagram illustrating the double-stranded-break-induced gain-of-expression assay used in subsequent figures. A construct with an in-frame (+1) crRNA target sequence (orange) preceding an out-of-frame (+3) luciferase gene (light green) is stably integrated into the genomes of HEK293T cells. Upon cleavage by a Cas12a/crRNA complex, non-homologous end-joining (NHEJ) repair places approximately one-third of the downstream luciferase genes in frame (dark green), enabling their expression. 11 Luciferase activity reflects the efficiency of Cas12a-mediated cleavage. (D) A list of target sequences used in subsequent panels with their preceding PAMs (blue). (E) The editing efficiency of AsCas12a, LbCas12a, and Lb2Cas12a, measured with the assay shown in panel (C), were compared using the six indicated lentivirally integrated targets. The means of three independent replicates are shown, with error bars indicating ± standard error of the mean (SEM). The significance of differences with Lb2Cas12a are indicated above bars representing AsCas12a and LbCas12 (∗p 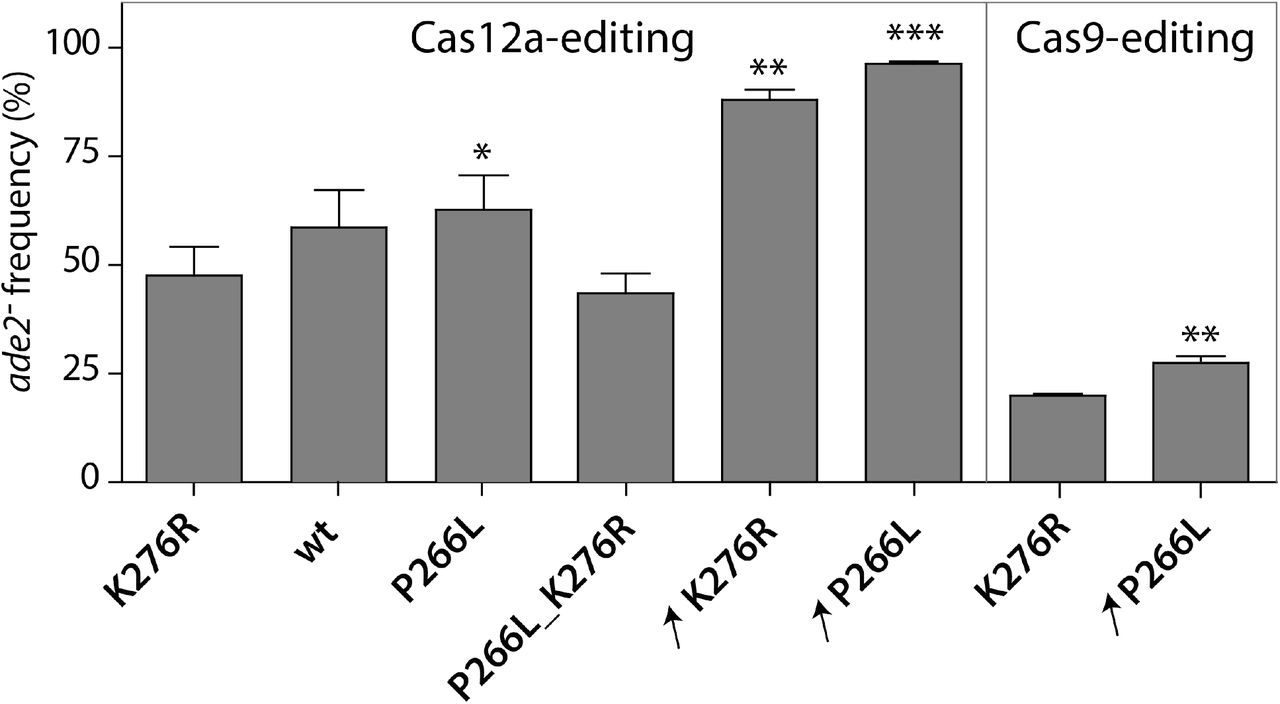 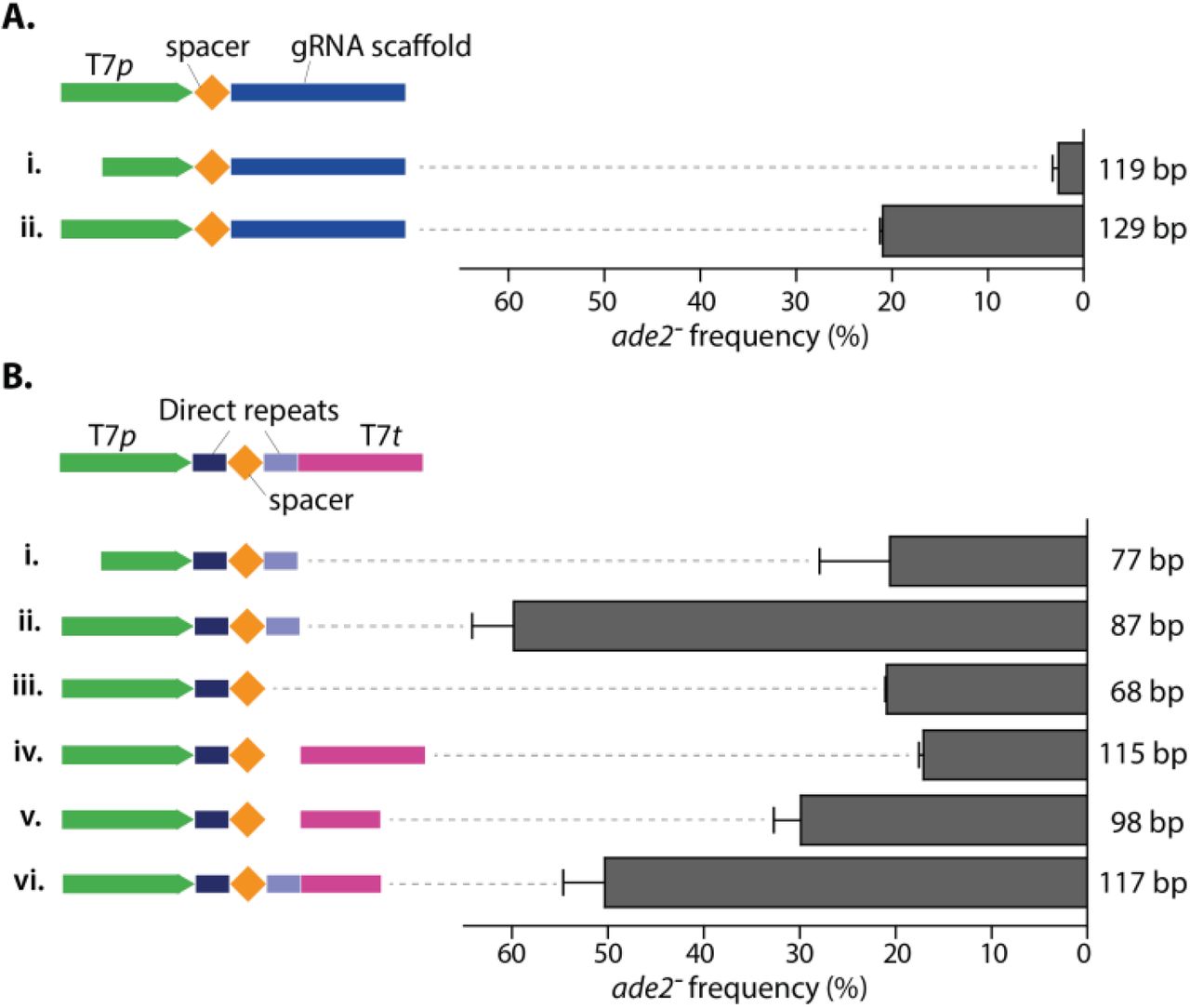 Figure Legend Snippet: Optimization of Cas9 and Cas12a gDNA design. Editing efficiency of ADE2 in strain IMX1905 transformed with gDNAs for cloning-free, T7RNAP-driven expression of gRNA. A) gDNA configurations for Cas9-mediated genome editing and respective editing efficiencies. B) gDNA configurations for Cas12a-mediated genome editing and their respective editing efficiencies. The size of each gDNA is specified on the right of the respective graph bar. Editing efficiency is expressed as percentage of red colonies ( ade2 ) over the total number of colonies. Values represent the average and standard deviations of data obtained from three independent biological replicates. 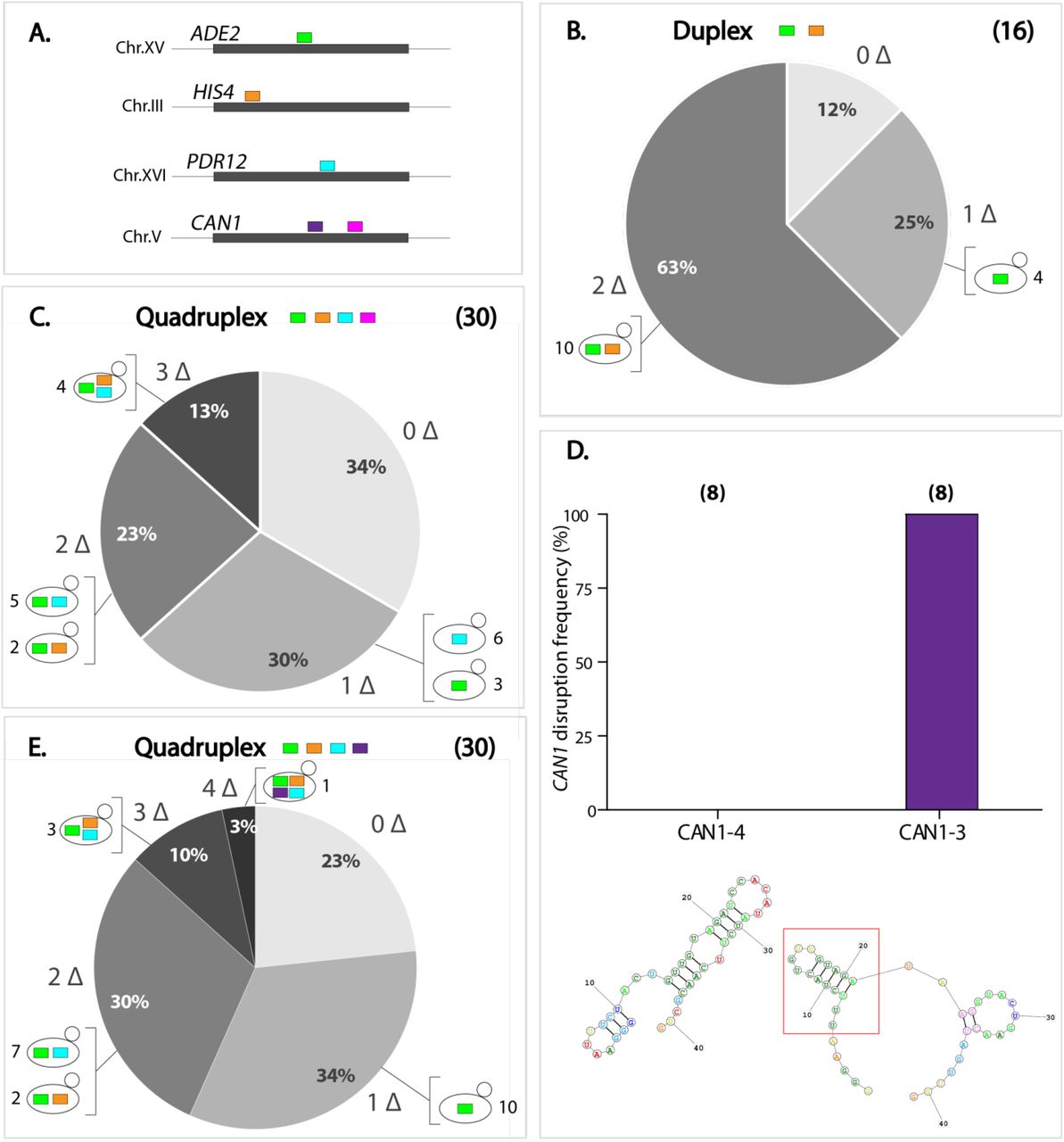 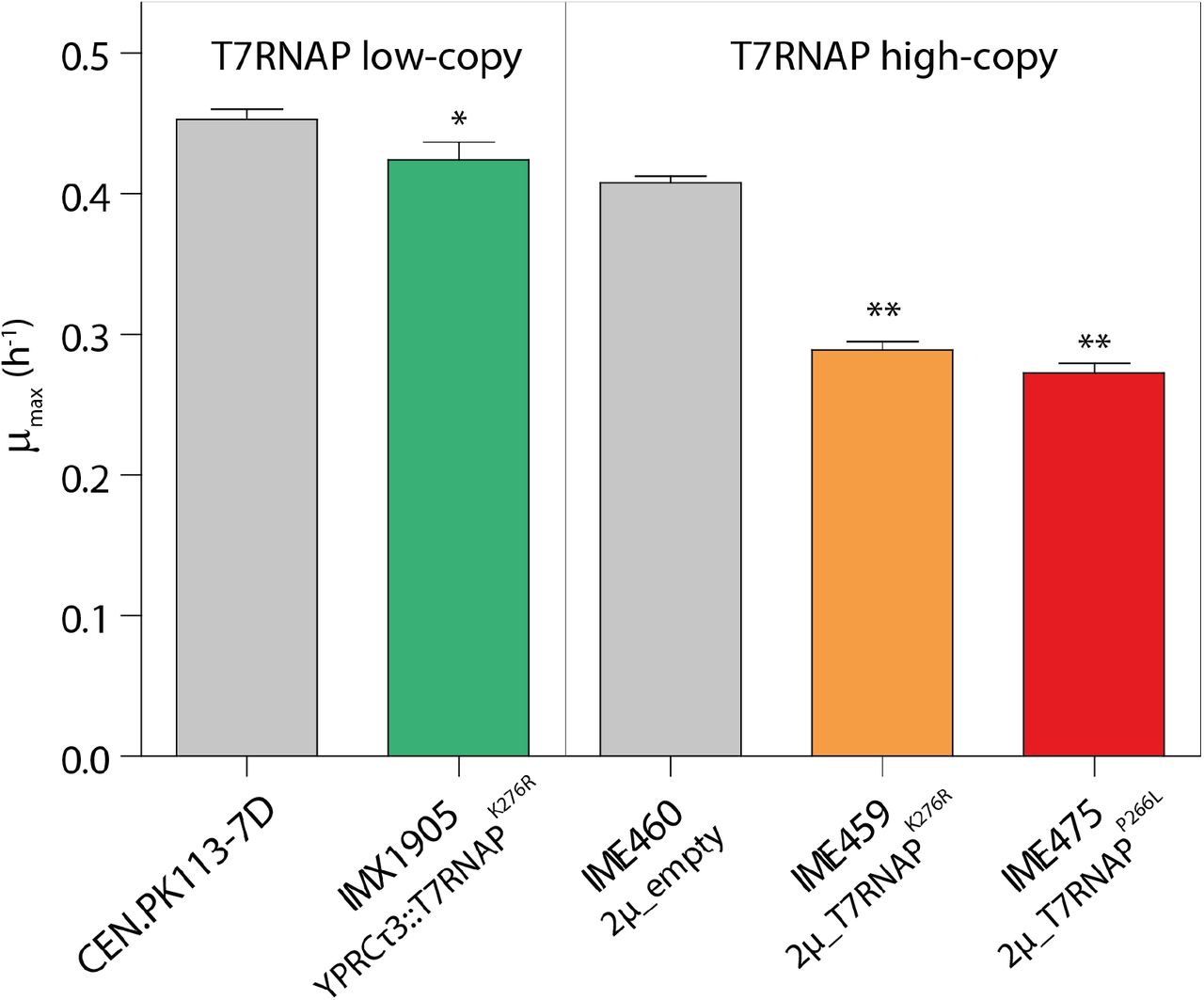 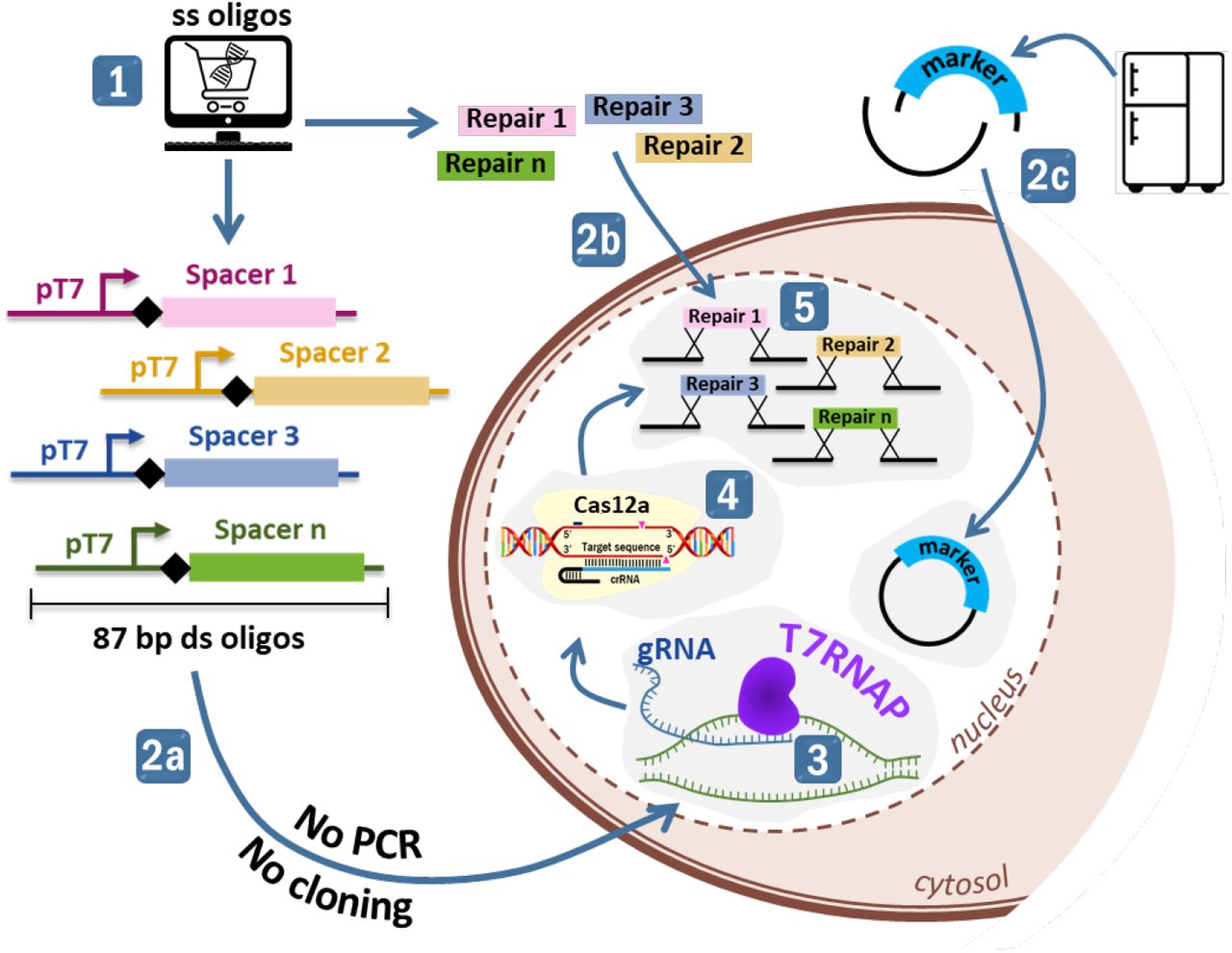 Figure Legend Snippet: Schematic overview of the gEL DNA approach. 1, in silico design and ordering of gDNA cassettes (87 bp) and repair DNA (120 bp) as oligos. 2, tranformation with the double-stranded (ds) gDNA expression cassettes (2a), the ds repair DNA fragments and an empty, split plasmid carrying a marker of choice. 3, expression of the gRNA by the T7RNAP. 4, targetted DNA editing by Cas12a (Cas12a). 5, repair of the ds DNA break via homologous recombination using the repair DNA fragments.

Figure Lengend Snippet: CANTRIP can be performed in a two-step reaction without Cas12a heat inactivation. Pre-incubation time with the Cas12a enzyme, before TdT addition, was 60 or 0 min after which the Cas12a reaction mix was heat inactivated at 70°C or not. Subsequent incubation time with TdT was 3 h. Bars represent the mean of two technical duplicates of an experiment and the corresponding differences between these two experiments. Article Title: Metastasis-associated protein 1 (MTA1) is transferred by exosomes and contributes to the regulation of hypoxia and estrogen signaling in breast cancer cells

Article Snippet: Successful editing was determined by the presence of T7EI cleaved products in the transduced cells compared to wildtype cells.

Article Snippet: To generate lamb1a (ENSDART00000170673.2) mutant zebrafish, a single gRNA targeting Exon 6 (5’-GGATCCTCAATCCTGAAGGCAGG-3’) was injected together with and Phenol Red into the yolk at the 1-cell stage.